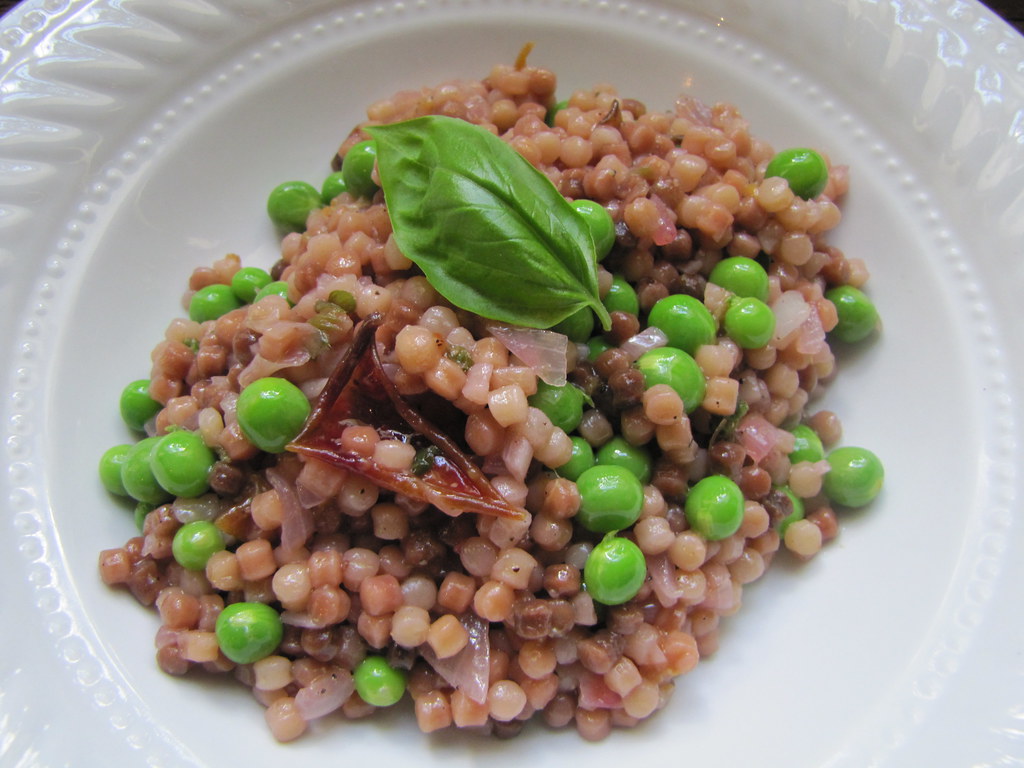 If you find yourself oddly annexed between two seasons (spring and summer) with ingredients (shell peas and red plums) by way of travel (to upstate New York and back to NYC), then this is what you might make. Especially if you’ve just discovered an ingredient from Italy called fregula, small granules of toasted semolina pasta that tastes a bit like burnt crumbs.


In a good way, of course. I came across a bag of fregula among the many interestingly shaped imported pastas at Bklyn Larder, a small cheese and charcuterie shop in Prospect Heights. Intrigued because the pieces seemed to have varying shades of toasty tan, I picked up the bag and bought it on a whim. Now, how to cook it? Thankfully, there was a recipe on the bag. 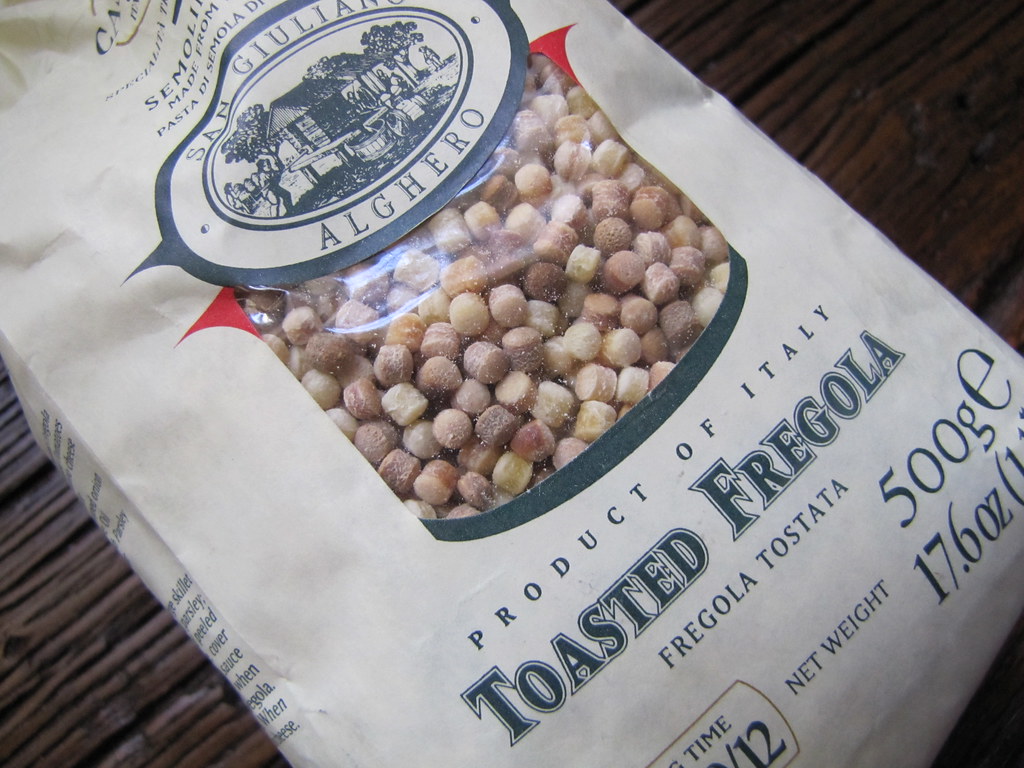 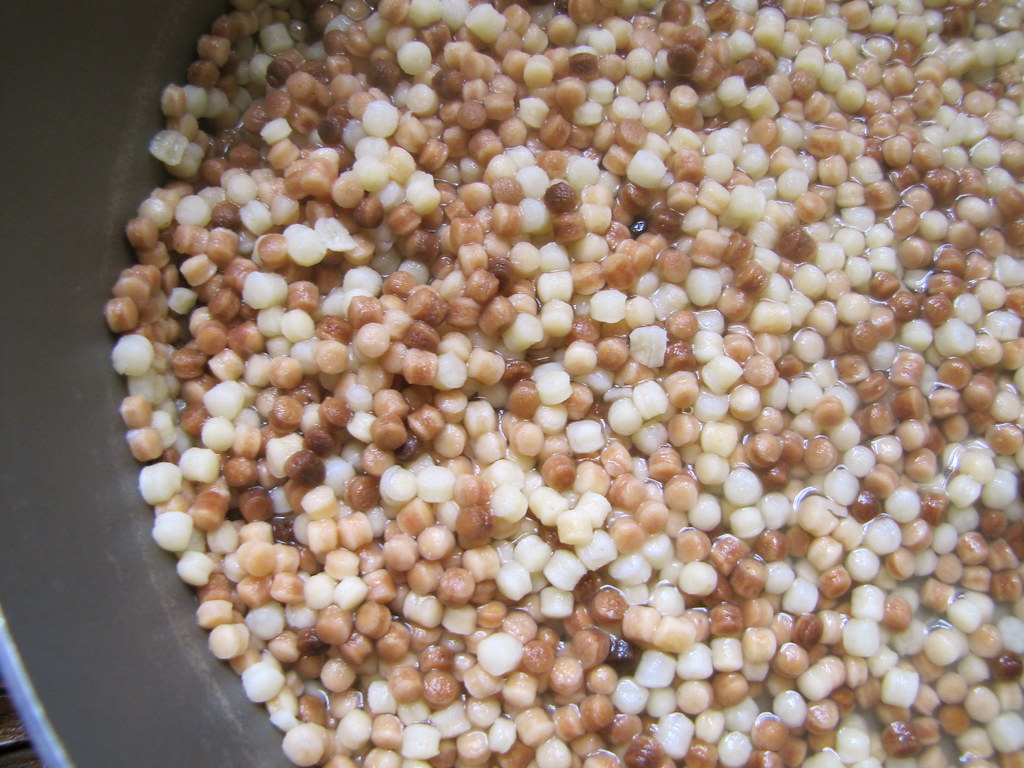 It called for chopped onions, a few ripe tomatoes, olive oil and basil, and it sounded more or less like making a warm pilaf or a risotto that didn’t need to be cooked quite as long. In shape and size, fregula resembles Israeli couscous, but once I tasted a grain after boiling it, breadcrumbs came to mind. It’s merely dried semolina pasta that’s been toasted in an oven, for a little complexity of flavor. I’m assuming the darker the piece, the more it was toasted, hence the range of tones and flavors. 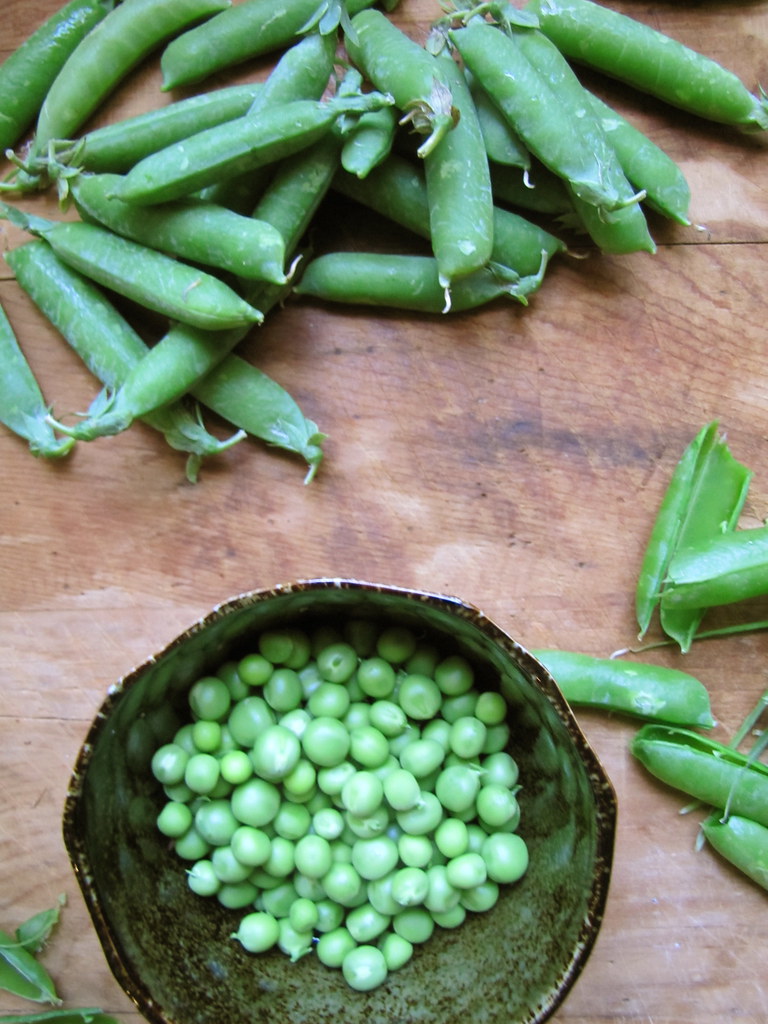 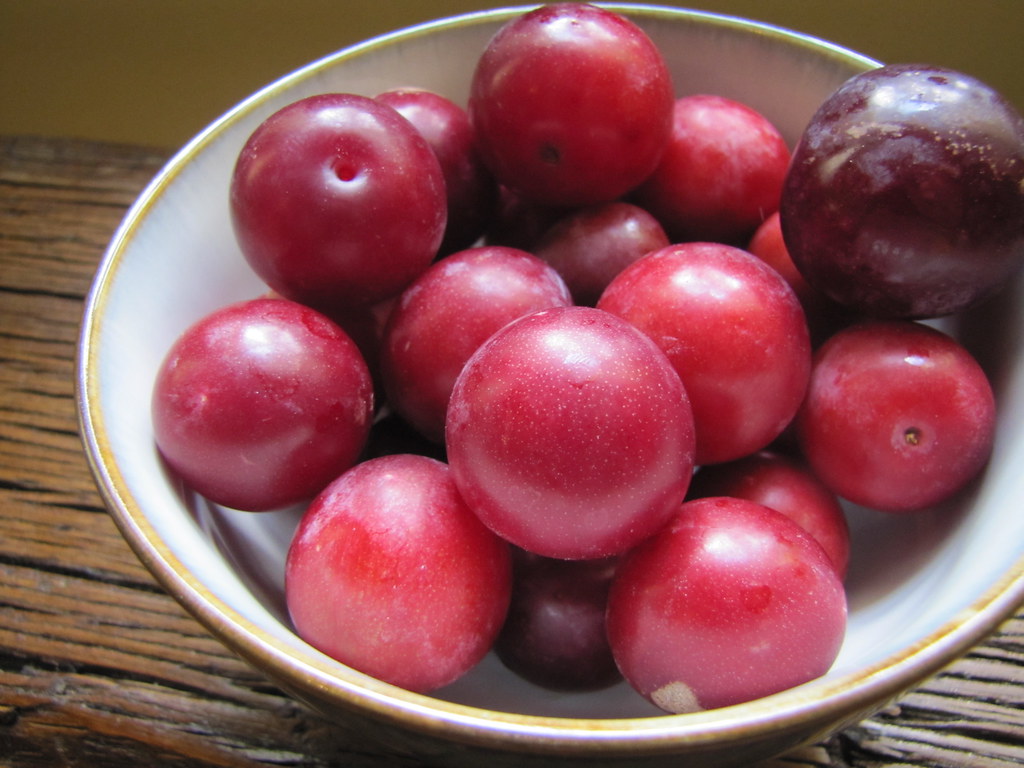 Peas, freshly shucked from the pod, were added to this mixture toward the end of cooking. I picked these up a couple weeks back in the Catskills on a ‘lil weekend trip, and it was probably the last of the harvest for even that far up north (but no less tender and sweet). Instead of a couple tomatoes that the recipe called for, I swapped in two red plums that I had on hand. (The tomatoes the recipe called for had the word “plum” in it, anyway… ) It was the last of my stash of one vegetable — peas — and the first of what looks to be many for another — plums. Fresh basil from the windowsill plant went in for the final toss. Combined, it was delicious: savory, and sweet.

I’ll probably be seeing many more plums and stone fruit, and by way of this blog, so will you, probably, too, because I’ve just signed up for a fruit CSA here. It’s the first stand-alone fruit CSA in New York City, and Red Jacket Orchards is the farm supplying it. Members will receive a weekly allotment of fruit and juices in season from the orchard, and I can’t wait to see what I’ll get. Since I like to have fruit at home at all times — apples throughout the dull winter and spring — it’s an economical decision for me. The juices they’ll throw in to each share is a luxurious plus, though. 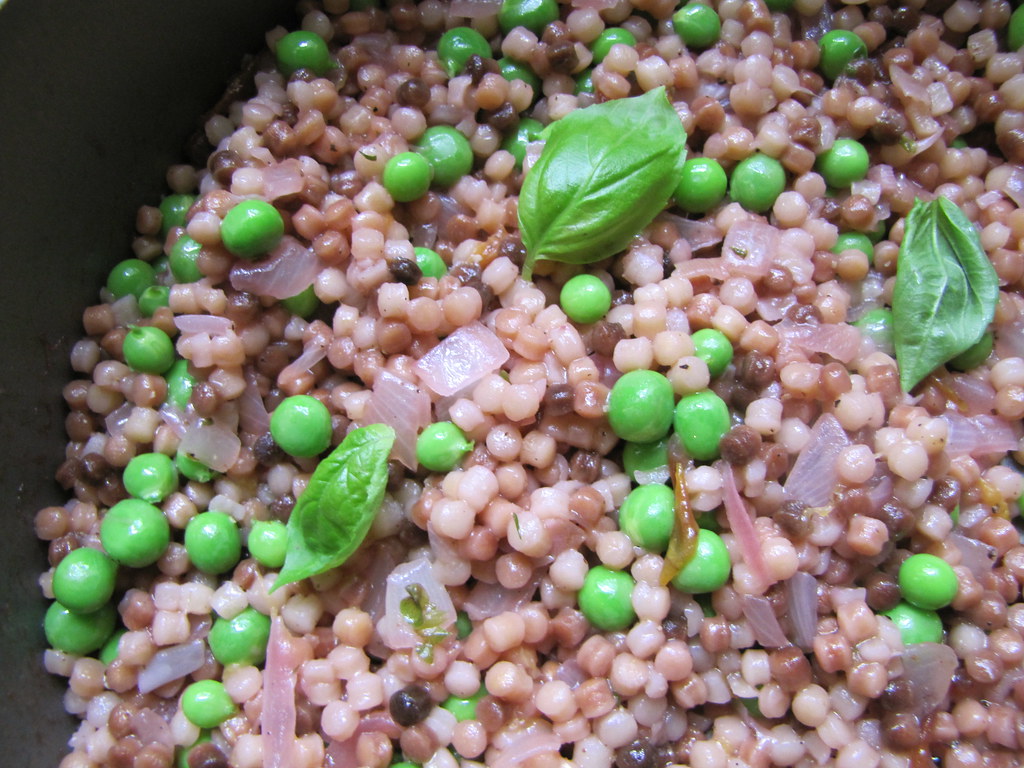 That’s my first effort at cooking fregula, and now that I now how familiar and easily the procedure is, I hope to try more stuff out with it soon. I actually can’t wait for when it gets colder and a hearty pasta with Bolognese sauce or meatballs would seem more fitting.

Heat about half of the olive oil over medium heat in a large, covered saucepan. Cook the onions until translucent, stirring frequently, about 6-8 minutes. Add the garlic and plums and cook, stirring, another 2-3 minutes. Add the fregula and the water. Increase heat to medium-high and bring to a boil. Cook, stirring occasionally, 8-10 minutes or until liquid is almost thoroughly absorbed. Add the peas and cook another 2 minutes. Season with salt and pepper to taste. Finally, add the grated cheese, basil or parsley, and the remaining olive oil to taste.

Six brownie points: With peas and fresh fruit, this dish transcends a side or background to a meat entree into a light meal on its own. Green peas are a very good source of protein and fiber, and also provide heaps of Vitamin K, so use plenty if you have them. The red plums — the stand-in for tomatoes — also have adequate Vitamin C, though they’re a little higher in sugars. Don’t be deceived (as I was?) by the different colors of fregula, thinking their darker hues might mean whole-grain. They are, after all, semolina, made from durum wheat, which is naturally yellowish in color (and turns brownish when toasted, apparently). So no brownie points to eating whole grains here.

Seven brownie points: The fregula here was a vehicle for using some fresh, local produce I’d garnered over the weeks. There can never be too many of these. But while the produce was from local farms that I’d actually visited, the starch here was imported from across the pond, in Italy. As was the olive oil and cheese, too. Such is life.