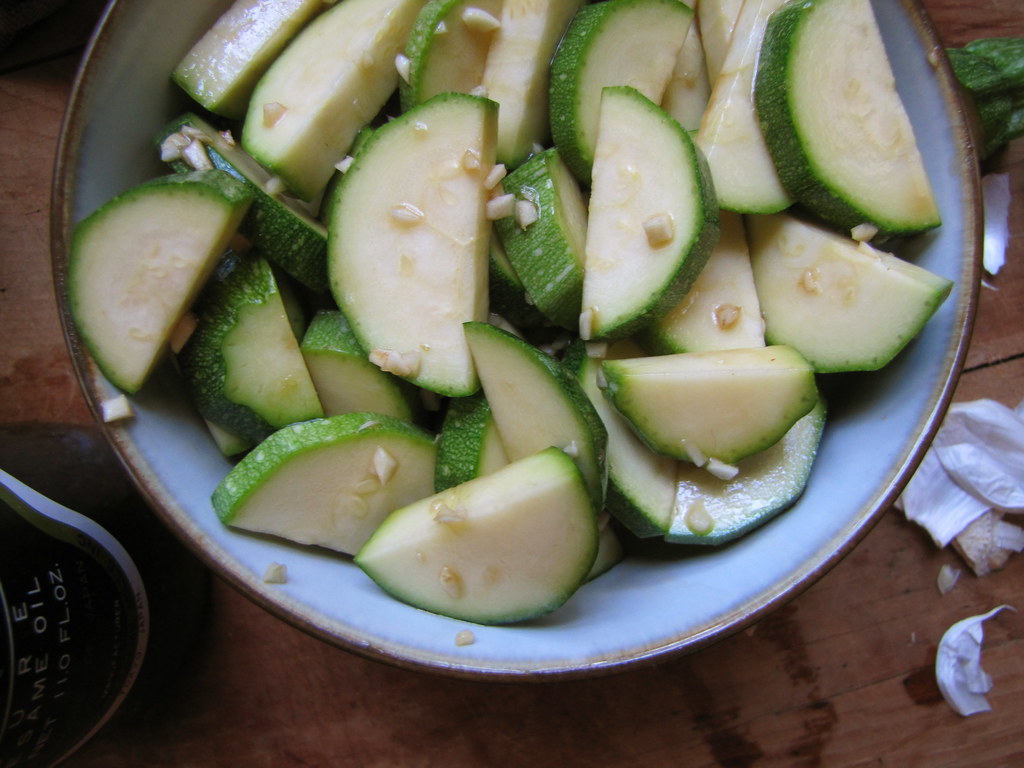 Growing up, a summertime party spread was never complete without these usual suspects: a bowl of cold sesame noodles, and a batch of marinated, peeled cucumbers that had been chilling with soy sauce, vinegar, tons of chopped garlic, and a dash of sesame oil. The latter had no name really, it was just my mom’s homestyle pickles, or quick-pickles. No fermentation, no cold-packing, just a long sit in the fridge was all that was needed to make them (although a tangy, fermented bite would develop over time). The longer the cucumbers marinated, the more pungent they would become as the pieces soaked up flavors like sponges. But they would lose some of their crisp snap at the same time. This wasn’t such a bad thing, however. And because this texture was appealing in its own, I thought I’d do the same thing with zucchini, which is much softer.
Truly fresh zucchini, from the home garden or fresh from the farmers’ market, is very enjoyable raw. It doesn’t have hardly any flavor to speak of, but its pale flesh gives the way a perfectly ripe pear should. Marinating helps the flavor out but preserves this texture. It’s quite a treat. I like to serve these at room temperature, because they just seem to taste their best. 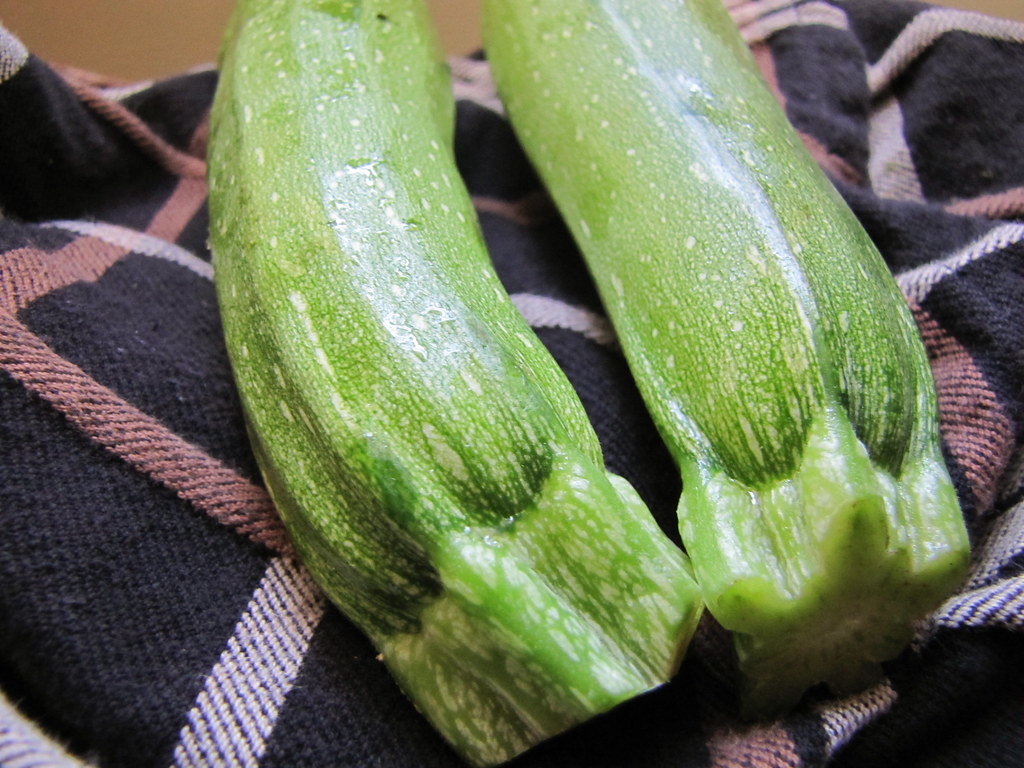 It shouldn’t be hard to find the finest zucchini at this time of year, early summer. Young zucchinis, ones that haven’t been sitting in storage or have over-ripened, are the most flavorful, contrary as that may sound. Pick ones that are unblemished and feel dense. The skins squeaky, and darker in color for the best taste. You may want to choose the smallest zucchini for the highest skin-to-flesh ratio, as their color will make a pretty attraction to an otherwise plain-looking side dish. A few dashes of vinegar and soy sauce go a long way, but the more time you have to let it seep in, the less you’ll need to use. So plan ahead before you make these, and you’ll use up less resources, if that’s a concern.

A main player in this version is chopped, fresh garlic. My mom used this in excess, and it really makes the dish. The Chinese, like the Italian, are not shy of this bulb. If you’re a garlic lover, this one’s for you. Once again, get the freshest, most crisp cloves. Rotten, slightly off-tasting garlic is not what you want to taste for the rest of the day. 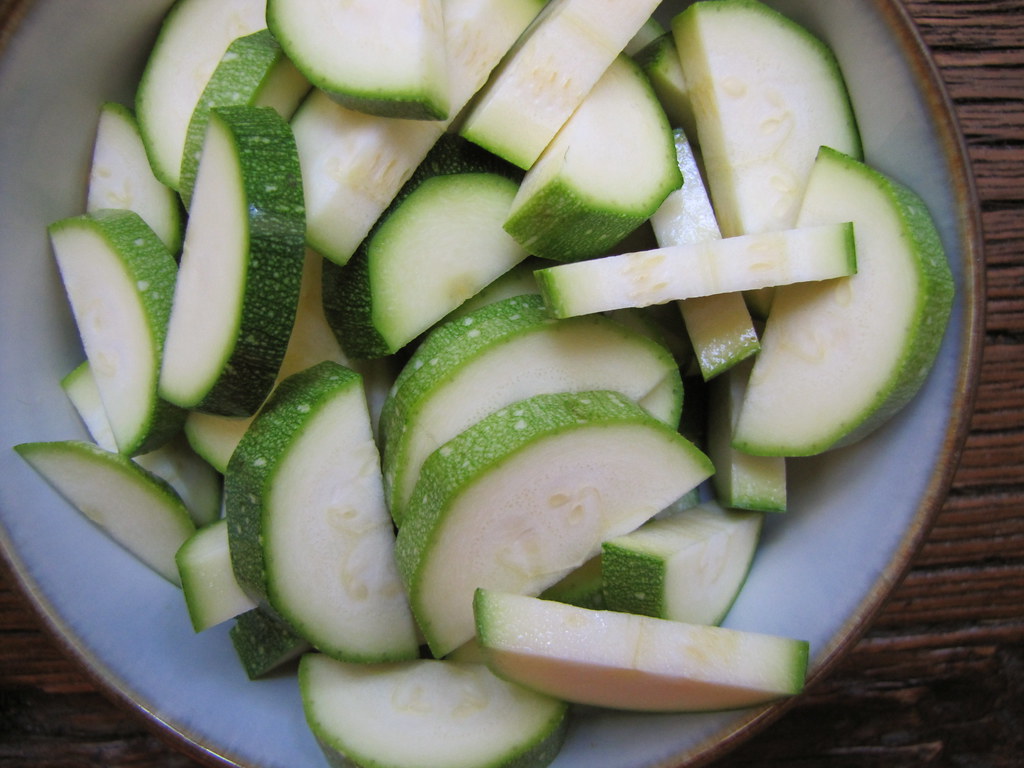 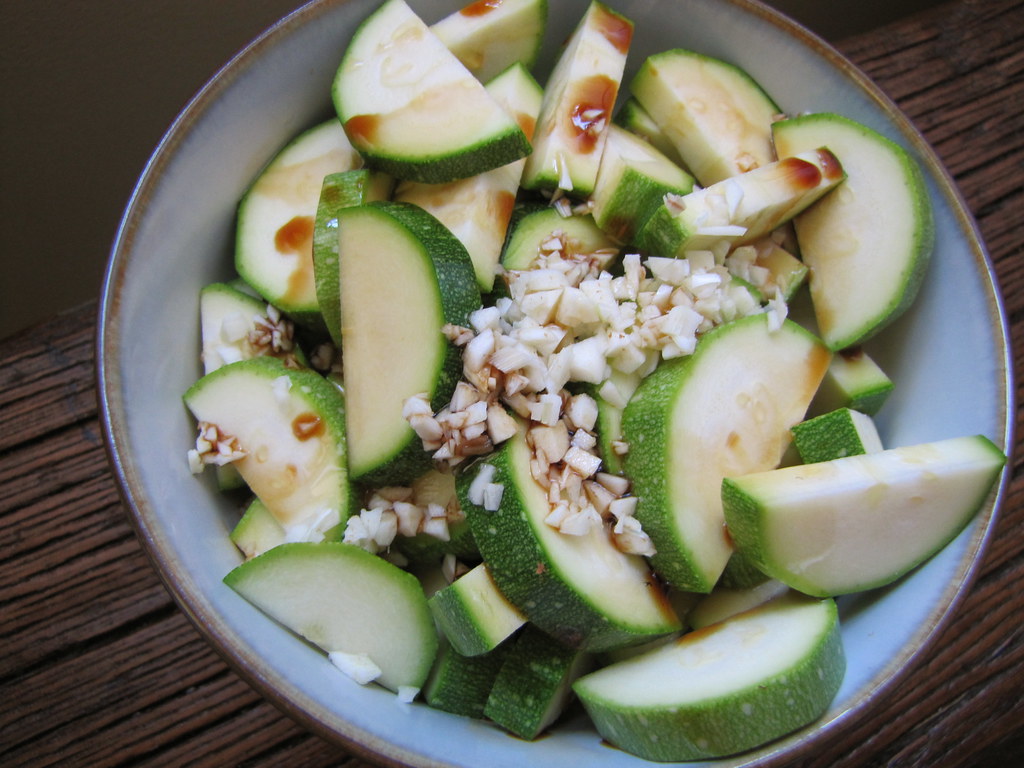 crisp, raw zucchini gets drizzled with the goods

With equal portions of soy sauce and rice vinegar, and a dash of sesame oil, you’re done. Let time, and maybe a couple turns to distribute the marinade evenly, do the rest of the work. If it doesn’t taste up to par when you’re ready to serve, feel free to adjust by adding an extra dash of anything right then. A “less is more” mentality is helpful, though, as you can’t take back what you’ve already marinated. And while you’re browsing the just-in-season zucchinis, consider trying this out with different varieties of summer squash, like crookneck and yellow squash, or those cute blossom-shaped pattypan squashes. I got a pile of round, eight-ball squashes in green and yellow the other week, to grill up for some friends, and they were tastier than expected. 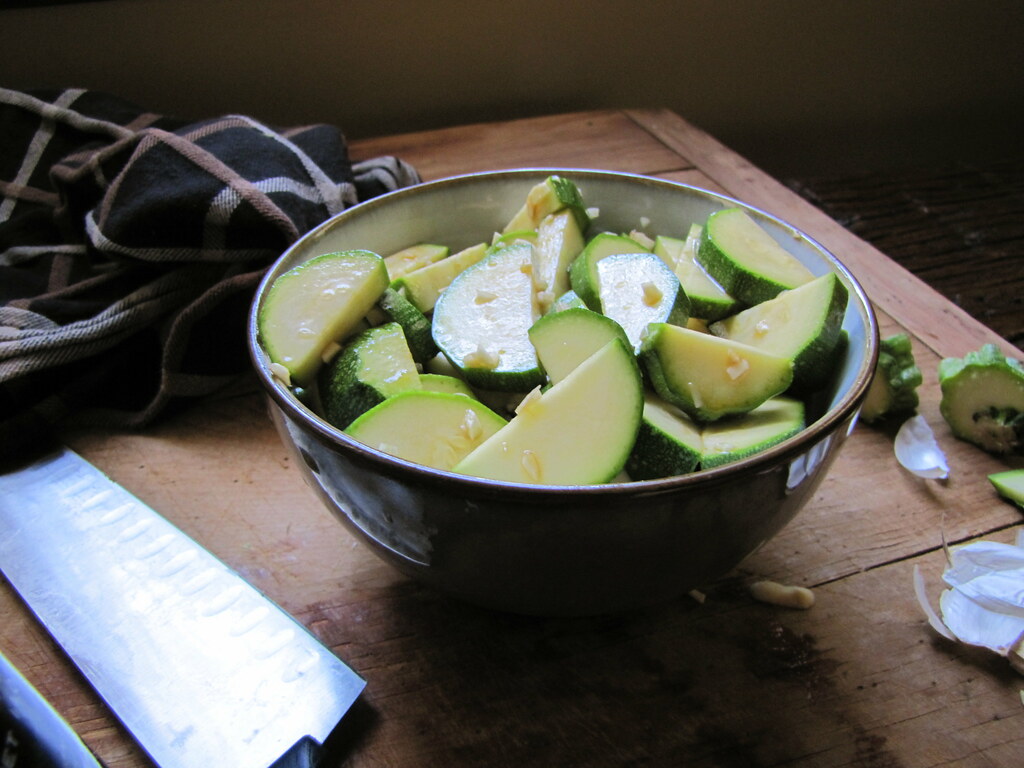 By the way, tell me it isn’t sheer pleasure to chop really fresh, firm zucchini with a chef’s knife. Like buttah.

Combine all ingredients and toss to coat evenly. Cover and chill for 3 hours or up to overnight, turning once or twice to evenly distribute the marinade.

Cost Calculator
(for 4 side servings)

Two brownie points: You’ll want to pat yourself on your sweaty back for this one. It’s a summery side with almost no fat in its flavorful dressing, no cooking required so as to preserve nutrients, and for something that could be deemed a pickle, relatively little sodium and sugars. Another plus, zucchini is much more densely packed with vitamins than cucumbers, another reason I chose it. It’s high in fiber and protein, as well as more common fruit and veggie vitamins like Vitamin A and Vitamin C, and it has iron, which is really good for kids. You may end up deciding you prefer pickles to raw zucchini in the end, but it’ll have been well worth the try.

Eight brownie points: It’s really easy being green in the summer. Eating locally has never been more obvious a choice — the produce just looks better, and it’s all over the place. So this zucchini came from Mignorelli Farms at Union Square Greenmarket, while I wait patiently for more of my own summer squashes to grow.