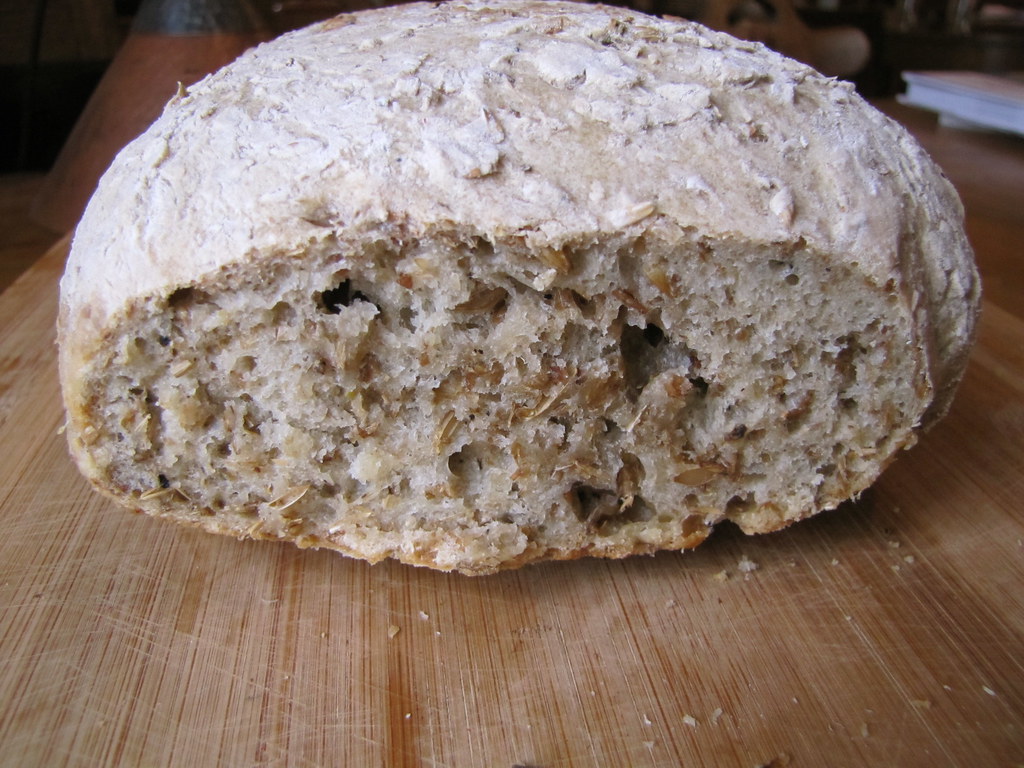 Behold a new era of bread-baking. Since hearing so many success stories about no-knead bread in the aftermath of publishing The Art of Eating In (which included a recipe for a parmesan peppercorn version), I’ve rekindled a passion for the home-baked loaf. While the no-knead method liberated the baker from spending much time and effort, my current bout of baking pride involves the least amount of ingredients that need to be purchased. As long as you’re handy with what’s around.


If you’ve ever made a sourdough starter, you’ll know what I mean about having a never-ending supply of something to leaven dough with. You just have to keep feeding it; and it, in turn, will keep feeding you. Well, it also helps to have a friend who is diligently feeding his or her starter, and passes off samples of it to share. That’s what happened to me, fortunately — though this tradition of the sharing the active yeast cultures dates back to much earlier than the chain letter. (In fact, another friend once offered me sourdough starter that he claimed had traveled the Oregon Trail.) When you “feed” your starter — give it more sugars for the bacteria in it to eat up — it multiplies, so that’s why home bakers are found with an excess. Actually, if everyone kept a sourdough starter at home and didn’t use or give some away after each feeding, I’d worry about the amount of bacteria in this world. Imagine, rivers of milky-white fluid with a distinctly fetid smell, splashing down staircases like that scene in The Shining…

There are numerous methods for sourdough starter, some involving sugar, others simply flour and water, and some with other starches, like this one which even has instant potato flakes. My friend Noah’s starter had only rye flour and water, and the recipe for it was on the back of his bag of King Arthur rye flour. Now, following this classic technique, I’ve begun making my own with all-purpose flour that I intend to use in a few weeks. 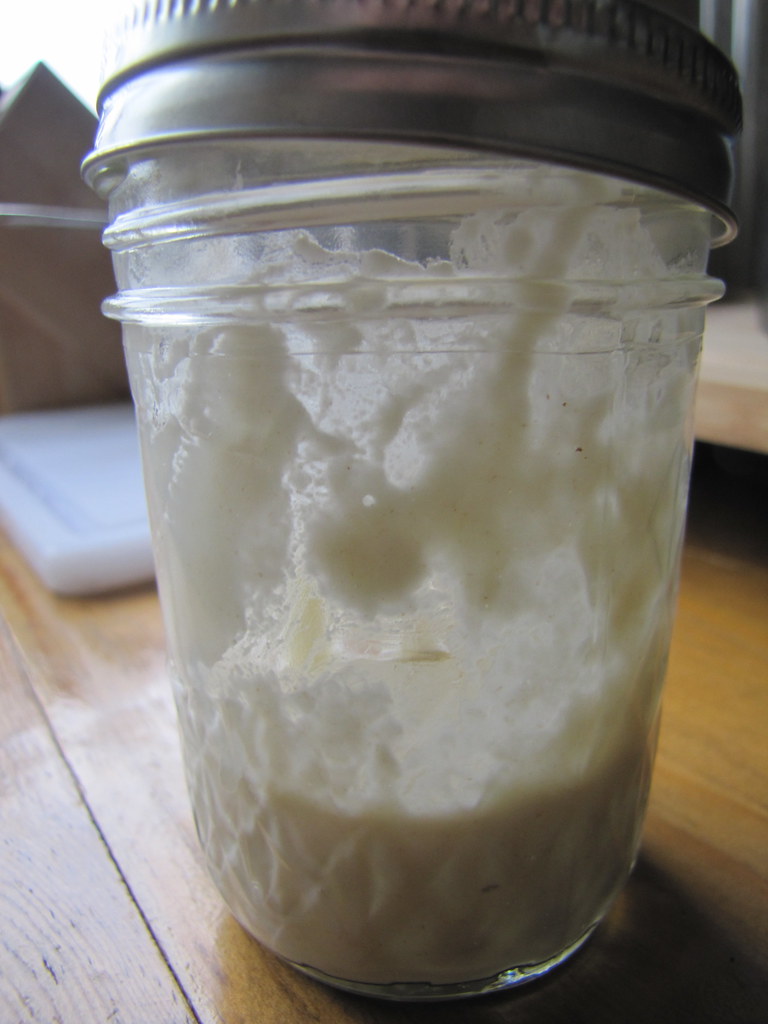 my own sourdough starter, just starting out

The next ingredient that was finagled free of charge for this bread was the spent grain. There are so many ways in which “spent grain” — a byproduct of commercial beer making — is not yet spent. It’s certainly enough to devote a whole blog to the subject. Essentially, spent grain is the stuff that comes out of the mash kettle, like a hot porridge. Malted barley, rye, wheat — whatever grain is used in that batch of beer. Think of it as tea leaves after they’ve been steeped. It’s not uncommon for breweries to provide this “mash,” as it’s called, to nearby farmers as feed for their livestock. Or to farmers who might use it as a fertilizer. (I’ve seen the pigs at Queens County Farm Museum go berserk when they didn’t get their mash from Brooklyn Brewery for a few days; Annie at Eagle Street Rooftop Farm is trying out Sixpoint Craft Ale’s mash as a fertilizer for her soil.) What’s less common, it seems, is for humans to consume it. 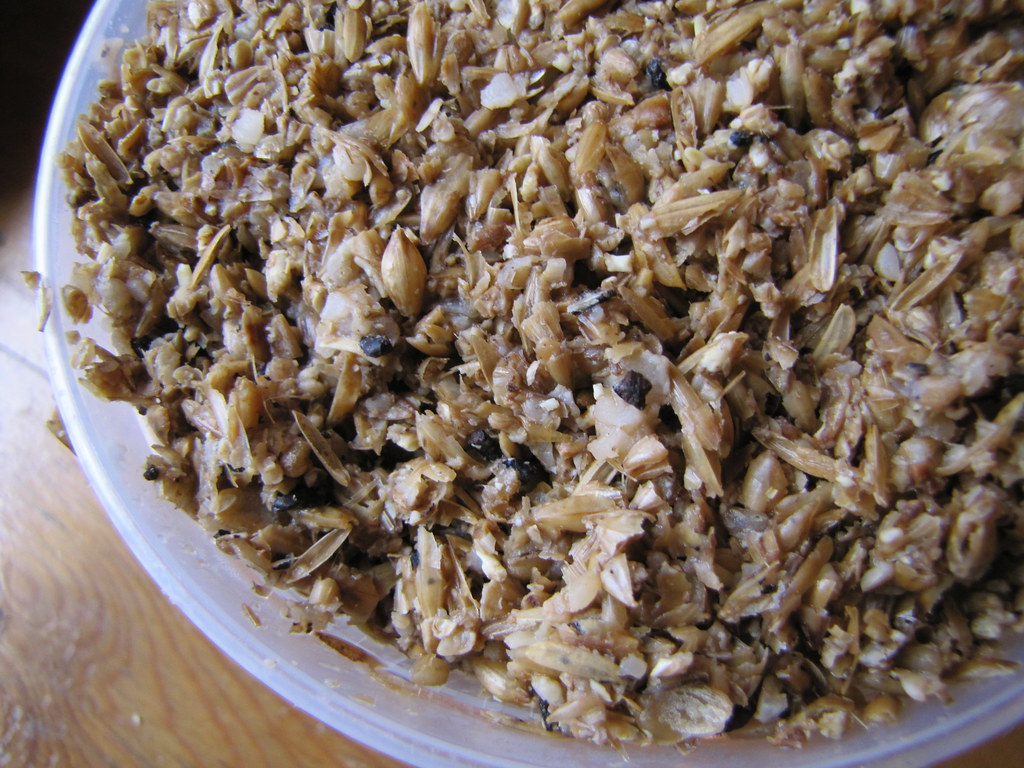 spent grain from a batch of Righteous Rye

If this is sounding like it was all predetermined, my adding mash to some sourdough like I was on some sort of noble mash-saving mission, it wasn’t. The Righteous Rye Ale at Sixpoint happened to have just been brewed while I was kneading some dough in the kitchen upstairs. And so I added some straight in. Who knew that the result, though it made the finished loaf much heavier, would taste so good? It was chewy, nutty-tasting and textured throughout, like a “whole grain” loaf but more complex, and with a slight funk thanks to the starter. This mash had a mixture of barley and rye as well as some rice hulls in it (the hulls are added to help filter the beer rather than flavor it). The rice hulls were probably the scratchiest addition (a good reason why spent grain tends not to be eaten by people is its coarseness), but the rye grains, according to some of the brewers, were at least more soft and pliable than the barley. Hence, more palatable in bread, or anything edible. 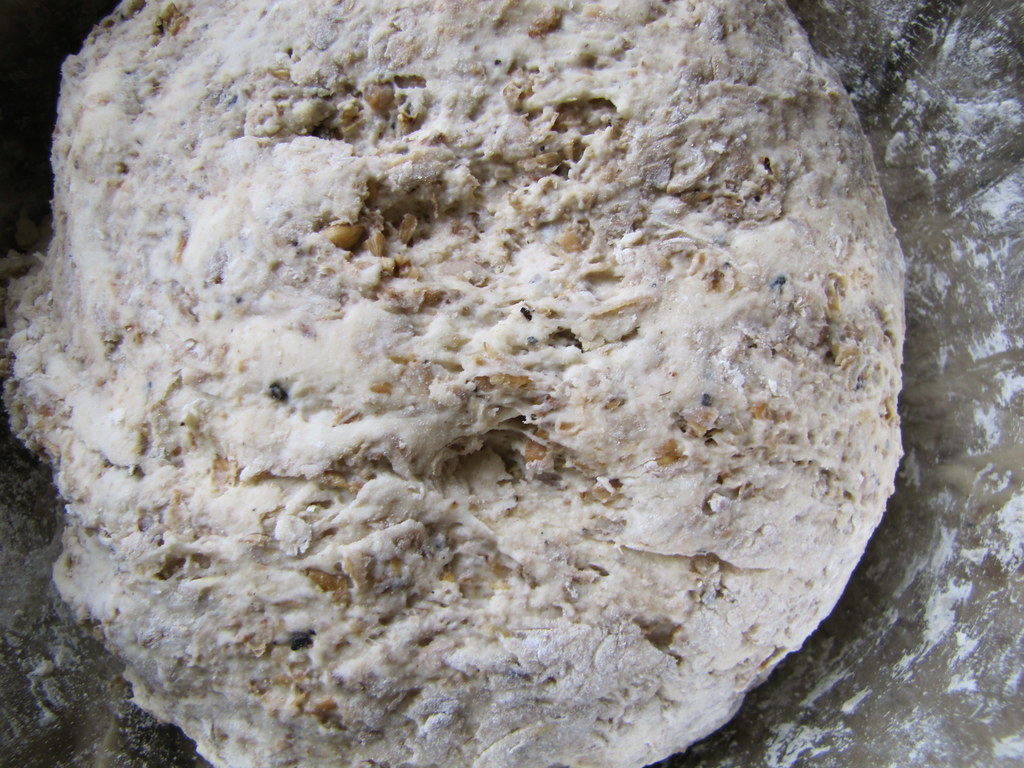 the dough after an hour of rising 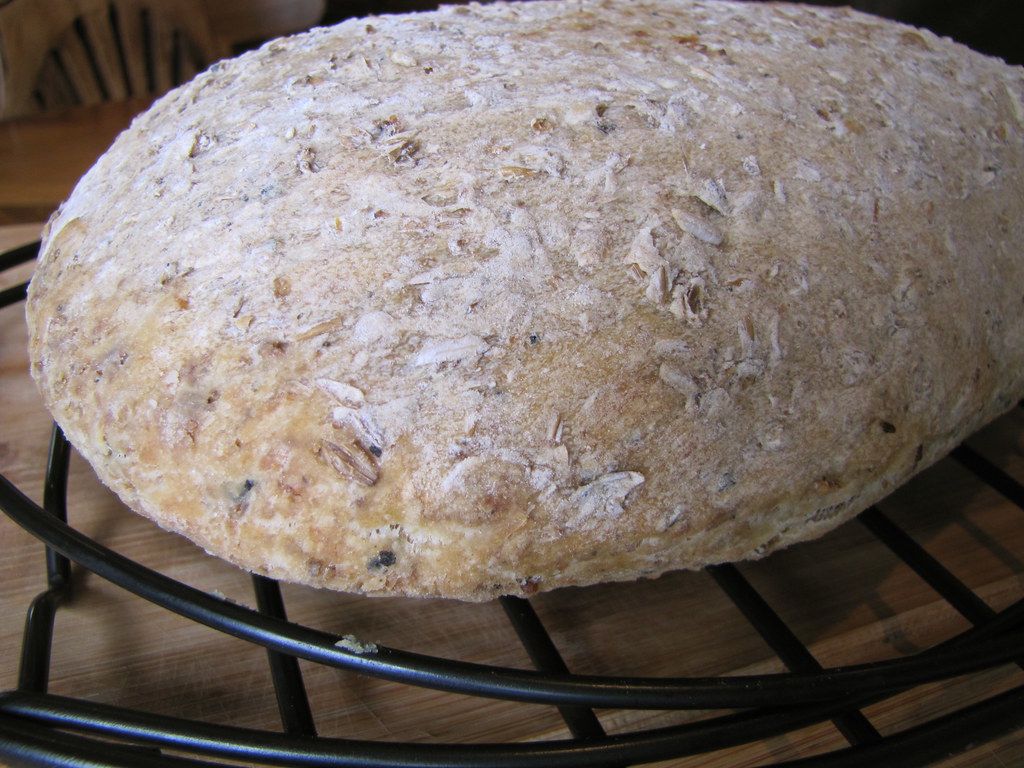 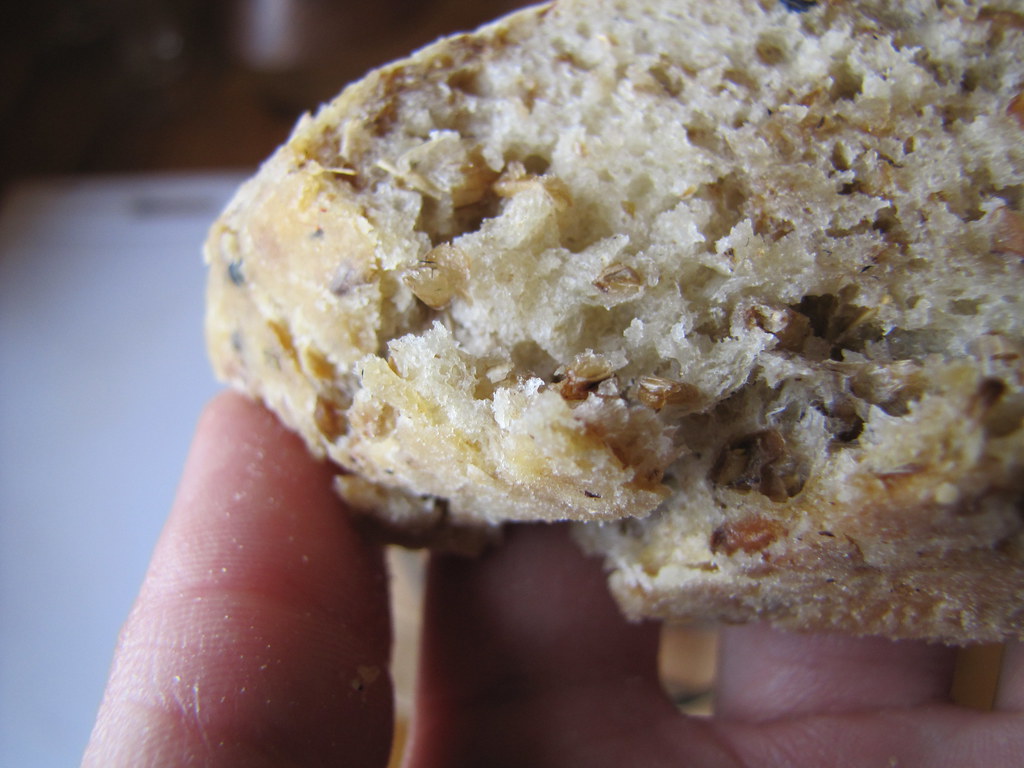 I realize that not everyone can get their hands on this particular batch of mash, from this brewery in Brooklyn. But I encourage you, if you know a friendly brewery in your neighborhood — or just someone who homebrews — to ask for a bit of their mash, whatever it is (they probably have plenty to spare). And then tell me about how your bread came out!

Here’s the recipe, as happenstance as it was born, and I will doubtless be tweaking many versions of spent and/or sourdough bread in the near future.

Combine the starter, 3 cups of the flour and enough water to allow the dough to just come together, in shaggy strands. Knead about 5-6 minutes and let rest in a bowl, covered with a towel. Keep in a warm place and let sit for 1 hour. Fold in the mash with your hands and dust on the remaining flour as you combine it to help keep dough from being too sticky. Form dough into a long, oblong loaf (or put it in a prepared loaf pan, which I didn’t have) and coast the bottom and top with flour. Let sit in a warm place covered with a towel for 1 1/2 – 2 hours.

Preheat oven to 450 degrees. Dust a high heat-save baking sheet or roasting tray with flour and plop bread loaf on it. Bake for about 20 minutes. Remove and let cool on a rack for 10 minutes before eating.

Three brownie points: We’re talking just bread, not a complete meal, but as far as breads go, this is definitely carries a well-rounded nutrition in itself. The hearty whole grains which stud each slice are still full of nutrients like fiber. Rye and barley both are chock full of ’em. And though this bread is going to taste much more like them than sourdough, the acids caused by the fermentation process of sourdough contribute to better digestibility, and yes, you named it, probiotic properties (that food buzz word). Don’t ask me for the full meaning of what’s behind it.

Eight maple leaves: Recycling byproducts of local businesses is great fodder for the home cook, or the commercial one, too. Aside from this blessing of a local brewery’s spent grain, this bread uses sourdough (you could say it was recycled, or passed on) from a friend, which is essentially flour and water, the two other ingredients in the bread itself. Remember to get unbleached flour, such as King Arthur, Hecker’s, and others, which are not treated with chemicals used in bleaching.