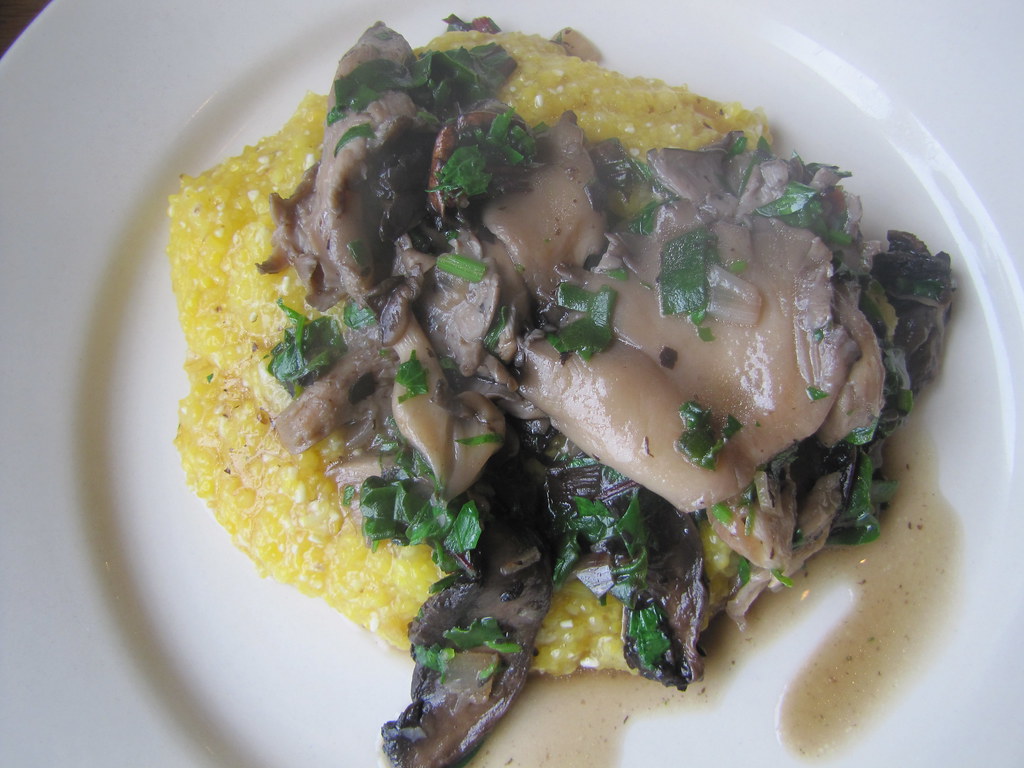 Getting into the midst of the Week of Eating In, I figured it was time for a good gathering over (homemade) grub again. As I discussed in The Art of Eating In, everyone can use some time in the middle of their day to relax, sit down and eat. Especially with your friends, fellow workers or family. Just like we all need to sleep, this communal time is restorative and constructive in many ways, even if it’s not a business or “power lunch.”


And in the middle of a very busy week, I really needed this down time, too. So I headed to the Union Square Greenmarket that morning with the goal of making lunch for a big bunch. This time, I had a specific recipe idea in mind. Working Class Foodies, the online cooking show that I had the pleasure of appearing in an episode for, had just made a video that inspired me to run to the market for some mushrooms. And polenta, the coarse-grind, flavorful kind that can be found from Cayuga Organics‘ Greenmarket stand. Working Class Foodie Rebecca cooked a simple wild mushroom ragout in the video, and served it with this polenta, and it made my mouth water.

I hope it does for you too, here’s the video above — and be sure to watch it through to the end, because the show is doing a giveaway of The Art of Eating In! See how to win a copy, and the recipe, too. 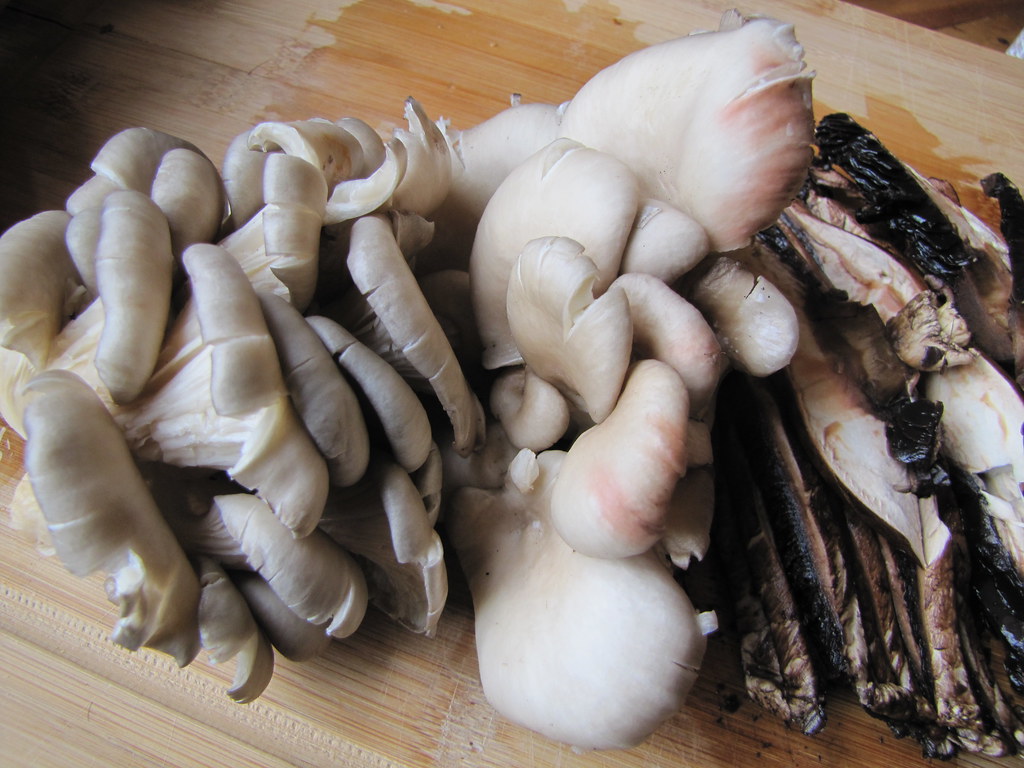 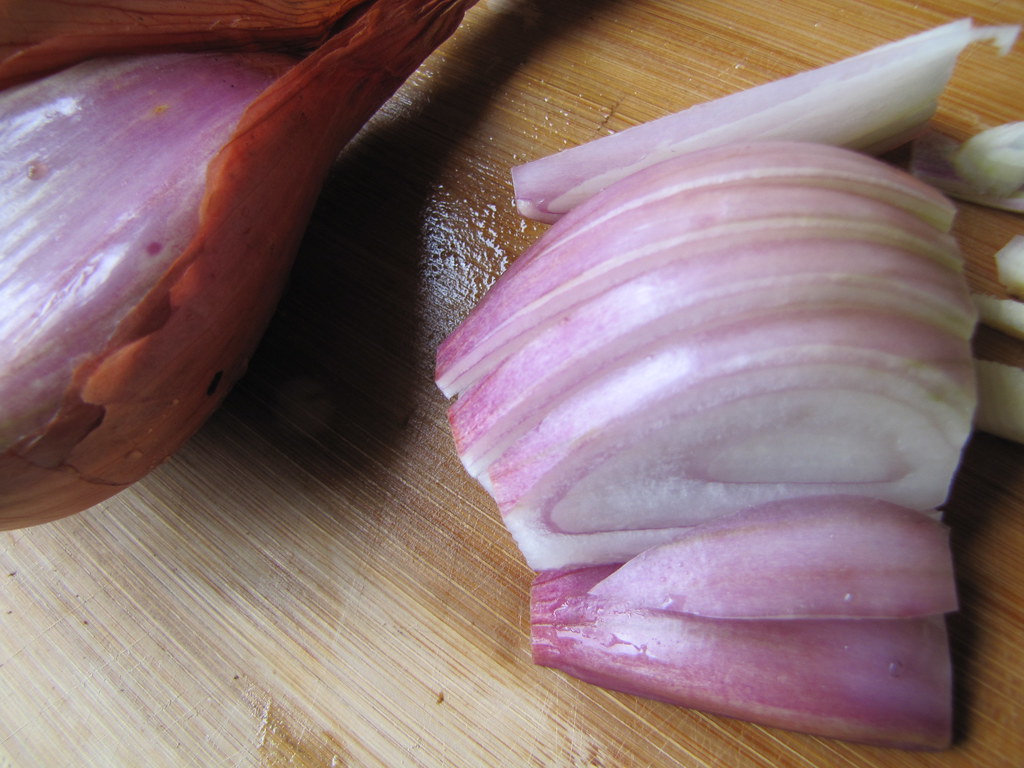 oyster mushrooms, sliced portobellos and a shallot for a mushroom ragout

I found just the mushrooms I was looking for, some gnarly clusters of oyster mushrooms at Madura Farms‘ stand. I grabbed a couple of portobellos there, too, just for variety, a shallot, and a bag of the polenta cornmeal. I’d also run into Annie Novak from Growing Chefs and Rooftop Farms at the market, as well as Mike Betit from Tamarack Hollow Farm, before my shopping was through.

Although I was off work Wednesday, I was making lunch for some very hard-working foodies: the brewers at Sixpoint Craft Ales, where my boyfriend is founder and president. There’s a kitchen I’ve been tinkering around in upstairs at the brewery, and once I arrived in Red Hook, I settled my things on the counter to begin. 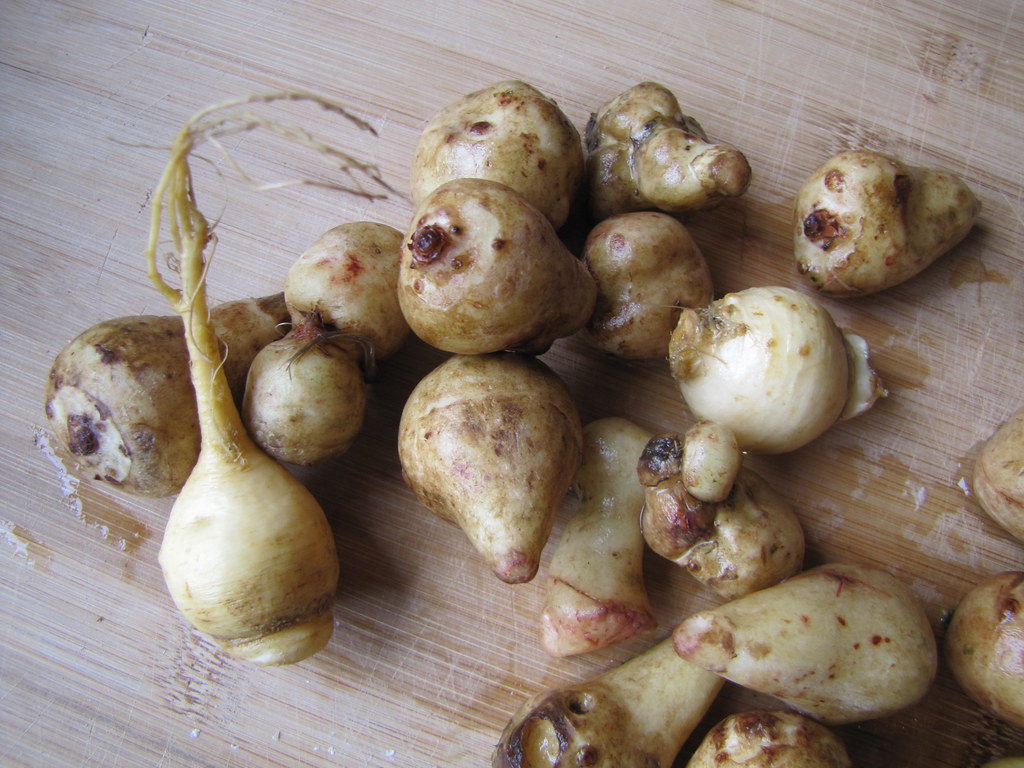 A platter of all manner of roasted root vegetables was in store, since they were flooding my fridge. Carrots, turnips, celeriac, sunchokes, parsnips, sweet potatoes, even parsley root (which I’d found at Madura Farms two weeks before), were all chopped up to equal size, with their skins on, and roasted at 375 degrees in a coating of olive oil, salt and pepper.

Meanwhile, I followed Rebecca’s instructions for the mushrooms, with a slight adjustment because I didn’t have any vegetable stock handy. No worries, beer was here. I slipped in some Bengali Tiger IPA to the sizzling mushroom sautee and watched its froth slowly subside. 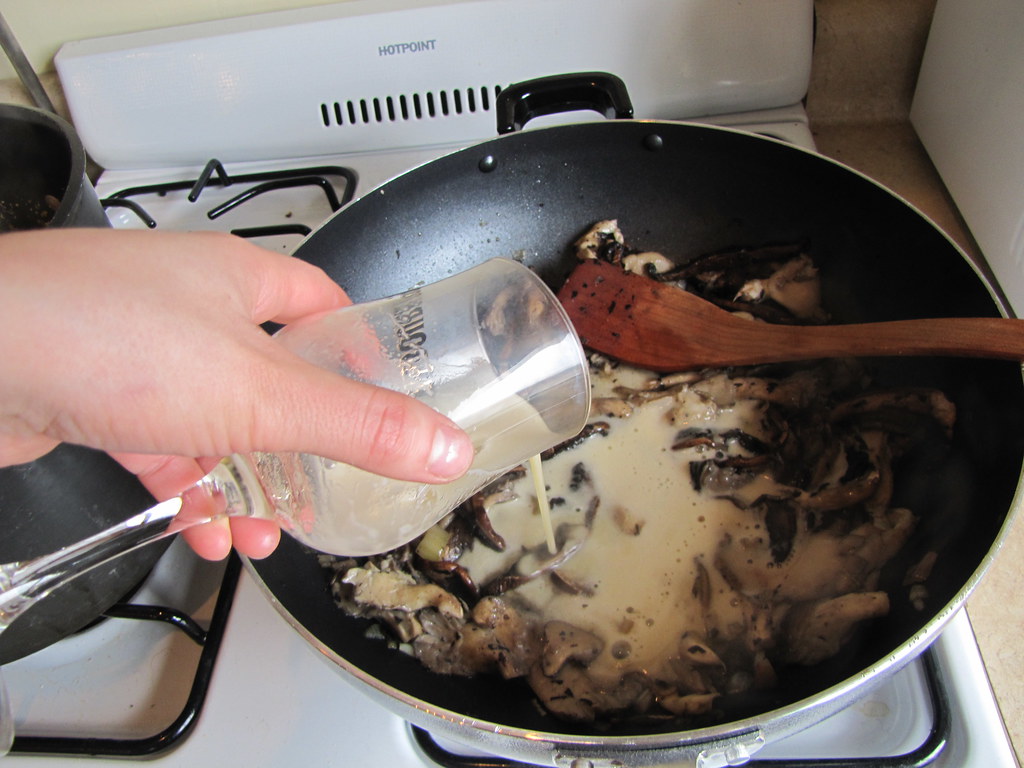 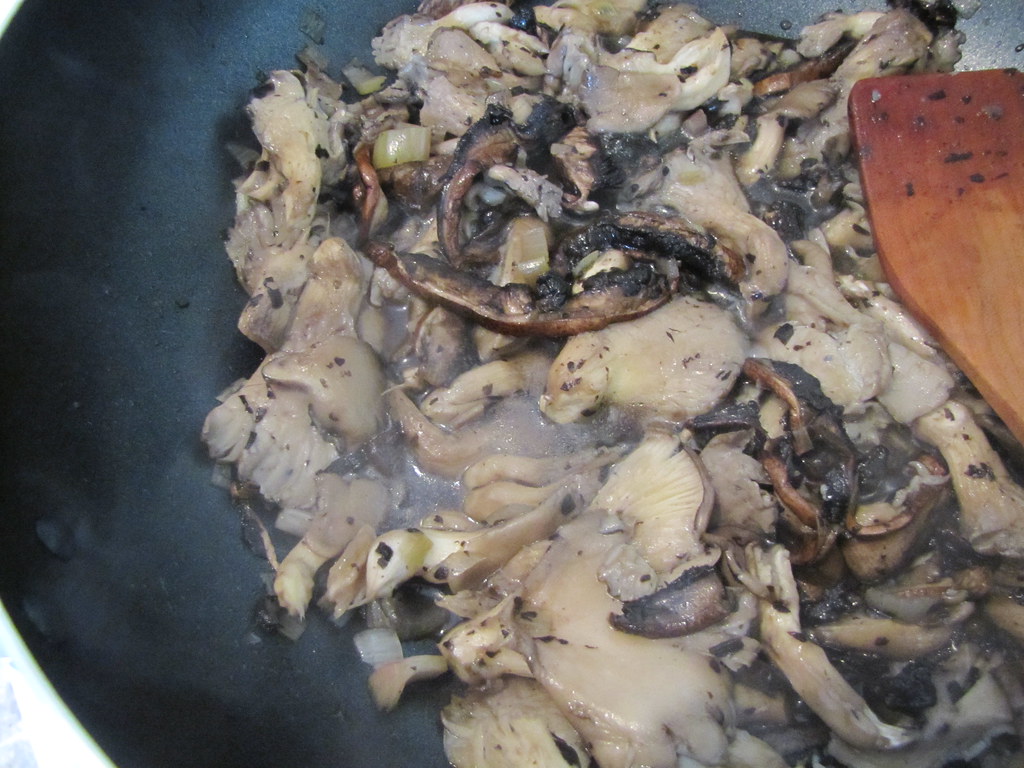 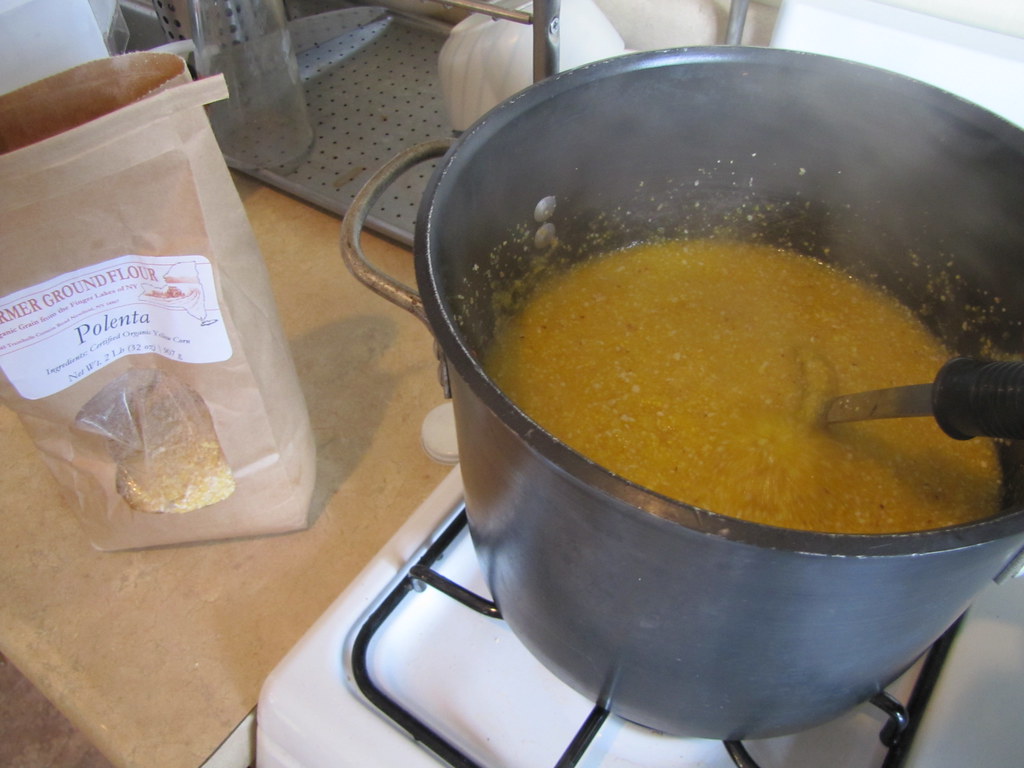 beer is added to the mushroom ragout; polenta bubbles in another pot

The kitchen was soon filled with a decidedly sophisticated, delicious smell, and one worker even asked, inhaling deeply over the stove, “Is that white wine in there?” So with polenta, mushroom ragout, a roasted vegetable platter, and a loaf of bread on the table, the crew came upstairs for a communal meal, followed by a birthday cake celebration for one brewer, whose thirtieth happened to be that day. You can bet I’ll be doing more cooking (and with beer and other brewery stuff) here again.

My night’s plans afterward found me out of the kitchen, but inside the Mind Kitchen, a new game show on Heritage Radio Network. Hosted by Matt Timms, my favorite Chili Takedown host, it’s a loopy challenge of the imagination, in which three guests are asked to create a three-course menu, verbally, using only a handful of ingredients that Mr. Timms stipulates. It was the second episode for the show, and as it was on Heritage, and based at Roberta’s Pizza, this would be my third night in a row where I would be taunted by readily available, really good pizza, which I was supposed to be eating with everyone else! Make it stop, please! 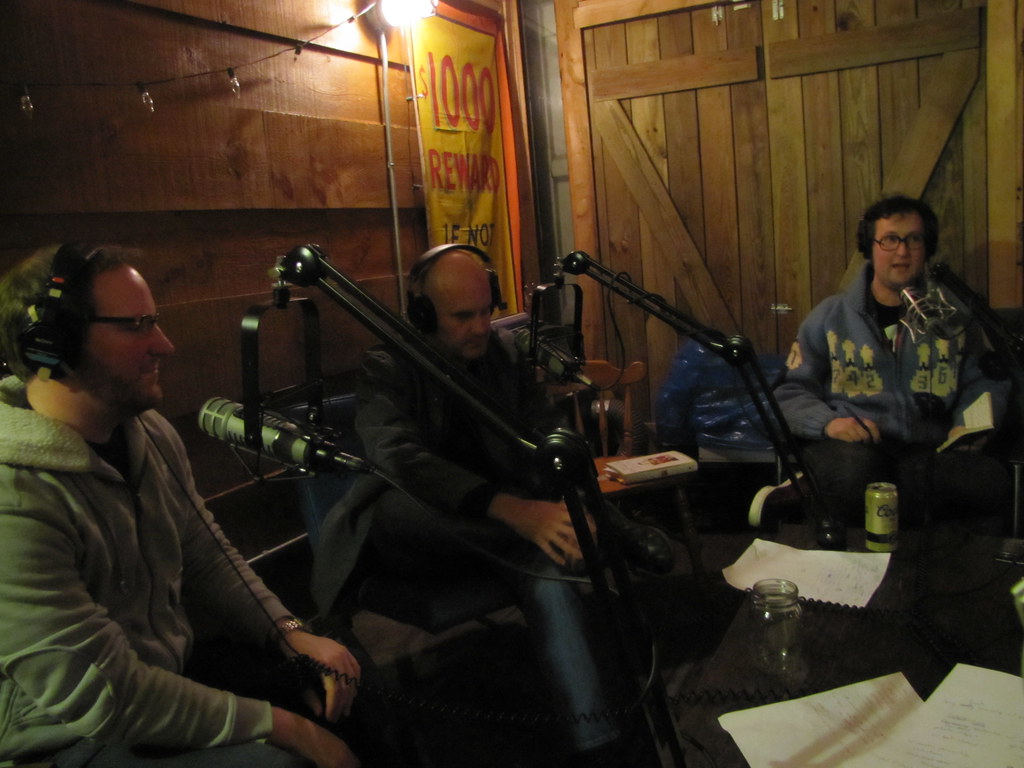 I managed to ward off the temptation, and we had a really fun taping. I won’t tell you how the outcome of Mind Kitchen went (listen Tuesday to hear), but I will say that there was a surprise guest judge, who wandered into the station to appear on the next live show, Eat to the Beat. It was Andrew Carmellini, renowned chef of Locanda Verde, and the other contestants and I on Mind Kitchen took turns trying to sell our imaginary meals to Mr. Carmellini as he thought and nodded.

In a final convergence of the food community for the day, I headed to Barcade that night (after a quick dinner at home that wasn’t pizza), for a five-year anniversary party for Sixpoint. Bumped into Rebecca Lando, from Working Class Foodies, whose recipe had just made my day.