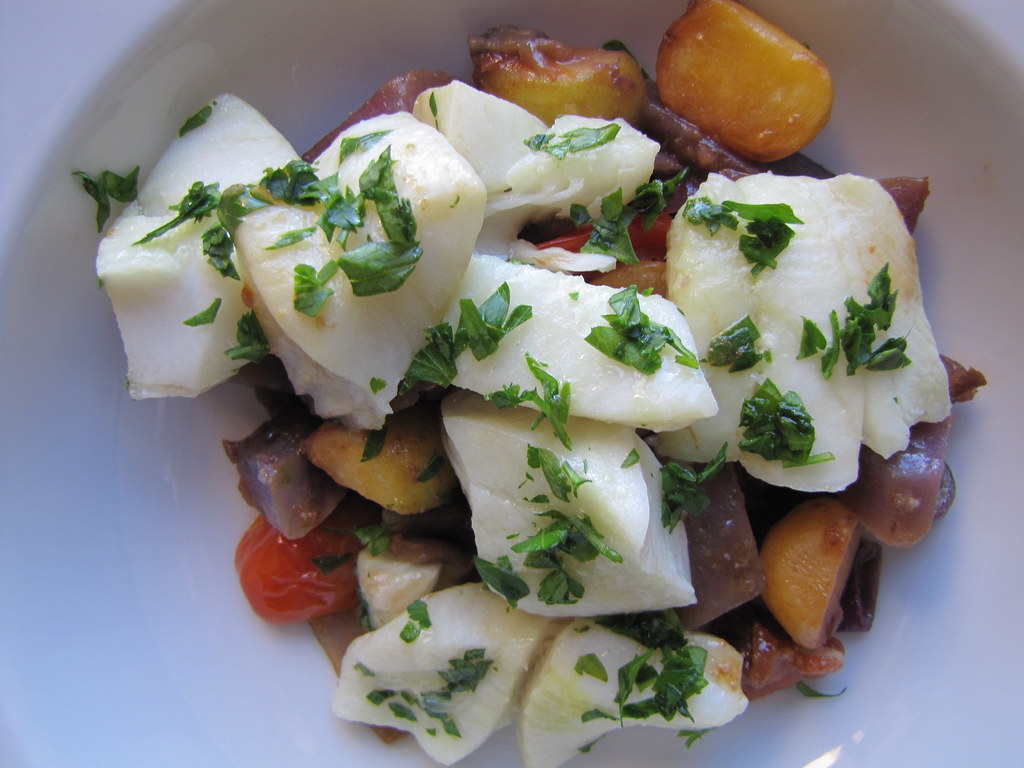 All too often, I hear the same question from home cooks: what do I do with fish? Not terribly much, is usually my answer. And as soon as you bring your catch home. But while most of us know that fresh fish is best at its freshest, the simple feat of cooking it deliciously has evaded some. So I’m going to share my latest favorite preparation, an unlikely hybrid of hearty winter vegetables and summery lightness.


The way the fish is prepared here is something in between steaming and braising, only it doesn’t sit in liquid like most braises, but rather bleeds its juices onto the vegetables, which in turn lend their flavors to the fish. Steaming is probably the most common way to cook fish in Chinese home cooking, because it keeps it so moist, and it’s often done with whole fish, to retain even more flavor. Steaming fillets works great, too, and because it’s been boned, takes less time. However, many prefer to find a little crust on the surface of their fish, and herein leads to home-cooked fish problems. With the really tender, flaky texture of many types of fish, it’s tricky to pull off a clean sear without getting pieces of fish stuck to your pan, or overcooking and spoiling its delicate flavor. I don’t terribly enjoy the caramelization, or crust, on these really light-tasting fresh fish either — it ends up tasting too “fishy” instead of fresh, with just a hint of the sea. When pan-frying, too, you can run the risk of making your fillet dried out instead of juicy and if it’s really flaky, fall apart when you attempt to flip. 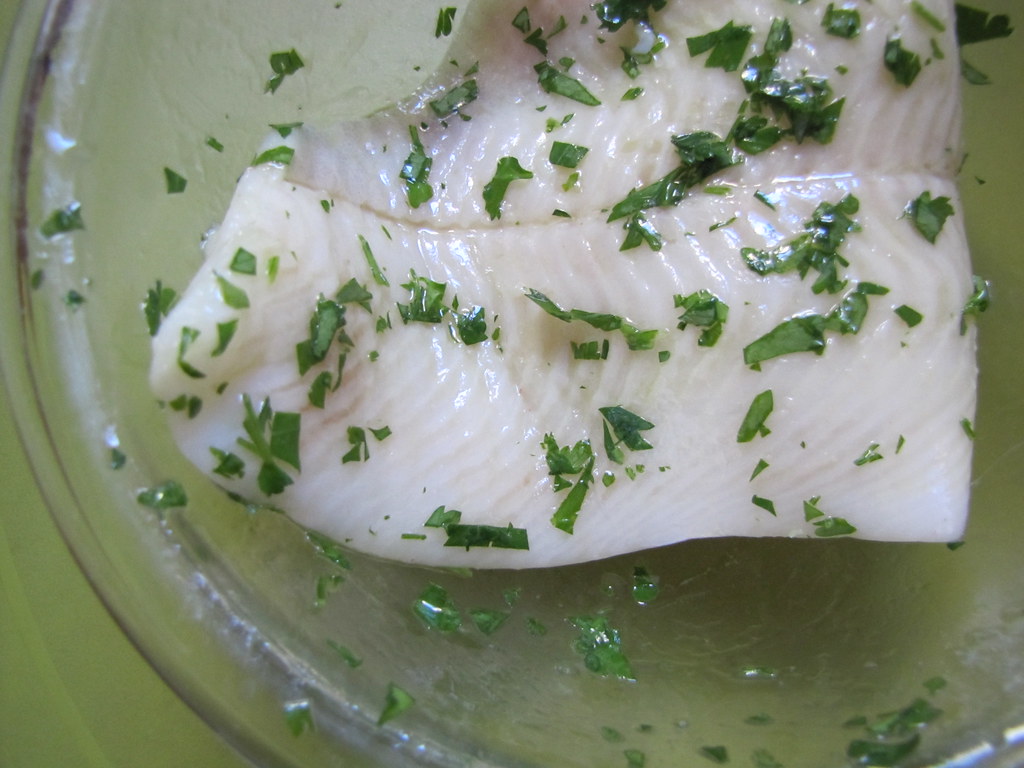 a fillet marinates in parsley, lemon juice and olive oil

So most any type of fish would work well with this recipe, I believe, but perhaps the most delicate, tender white-fleshed fish are best suited for it. My first test-run of this recipe was with hake (and it was for a four-course meal for a Time Out New York guest blogging stint). Hake is a flaky fish similar to cod, only a little less sweet-tasting, according to the fishers at Pura Vida Fisheries’ Greenmarket stand. Then, when I planned to redo it the next week to take more photos, there was a blizzard in the tri-state area. Only five of the twenty-some farms usually camped out at the Union Square Greenmarket heroically made it into the city that Wednesday. Pura Vida was not one of them, to my misfortune. So I took cover inside Whole Foods and purchased this turbot, which was on sale. 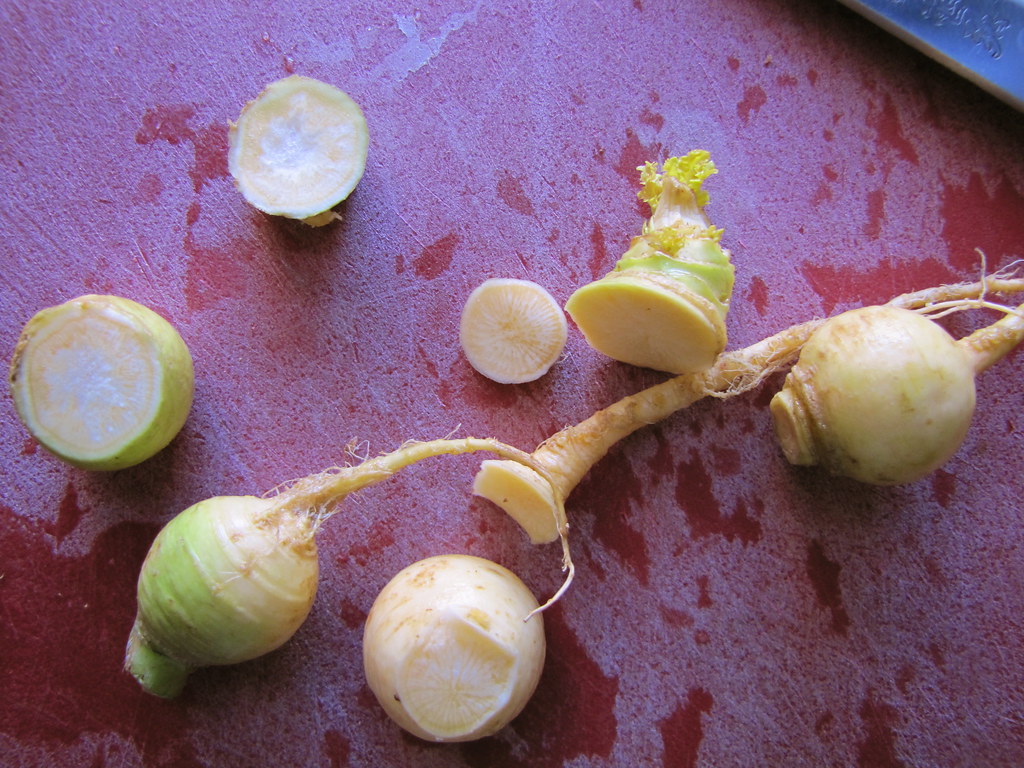 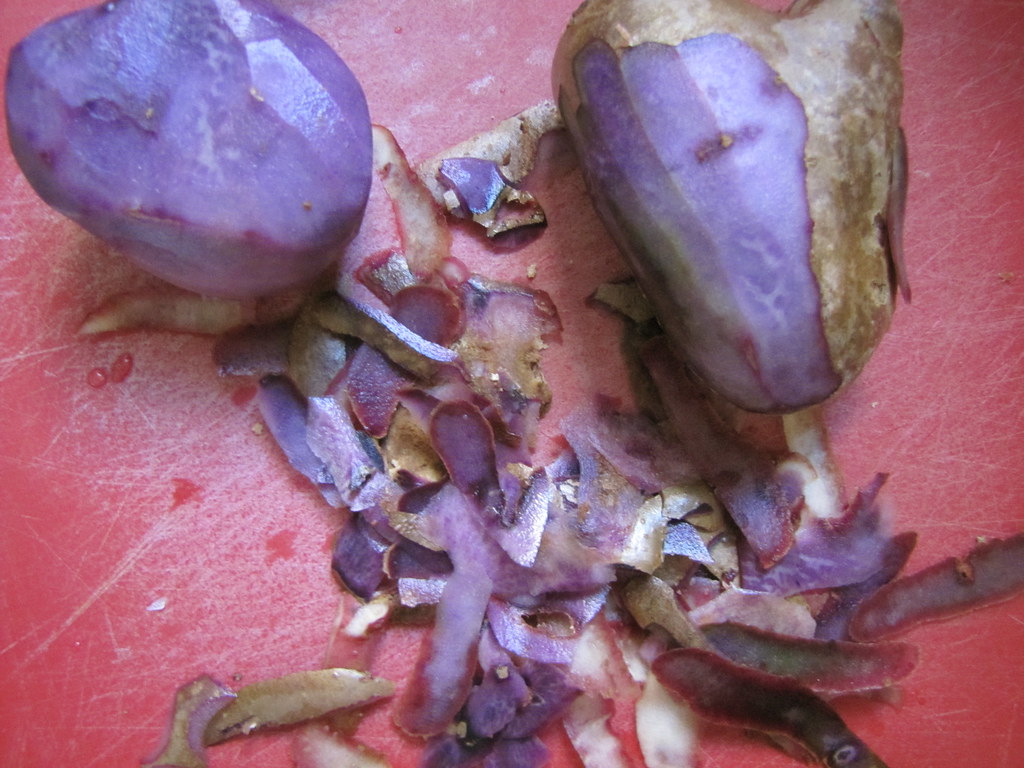 and purple potatoes their dull skins

Luckily, I still had some root vegetables from the market in stock: baby golden turnips and purple potatoes. As well as onions, crisp red ones, and a half-carton of grape tomatoes (not in season locally at all, but leftover from a previous recipe-making mission).

The onion was sliced and softened over low heat in a heavy-bottomed pan for several minutes first; then the potatoes and turnips, chopped to meaty chunks, were given a crisp on their sides with some more olive oil on the pan. The tomatoes were halved and tossed in, to lend some liquid to the dish, then the chunks of fish (which had been sitting in a lemon juice-parsley marinade with salt and pepper beforehand) placed on top of all the vegetables so that they weren’t touching the pan. It was showered with a generous spritz of fresh lemon, then the lid went down, the heat was lowered, and ten minutes or so later, the fish was just cooked. There’s something really neat that happens in the few minutes or so after lifting the cover on the entire dish, too — the juices running all around the bottom of the pan begin to thicken, from the starches in the potatoes and the proteins in the fish’s juices. It creates a delicious sauce. 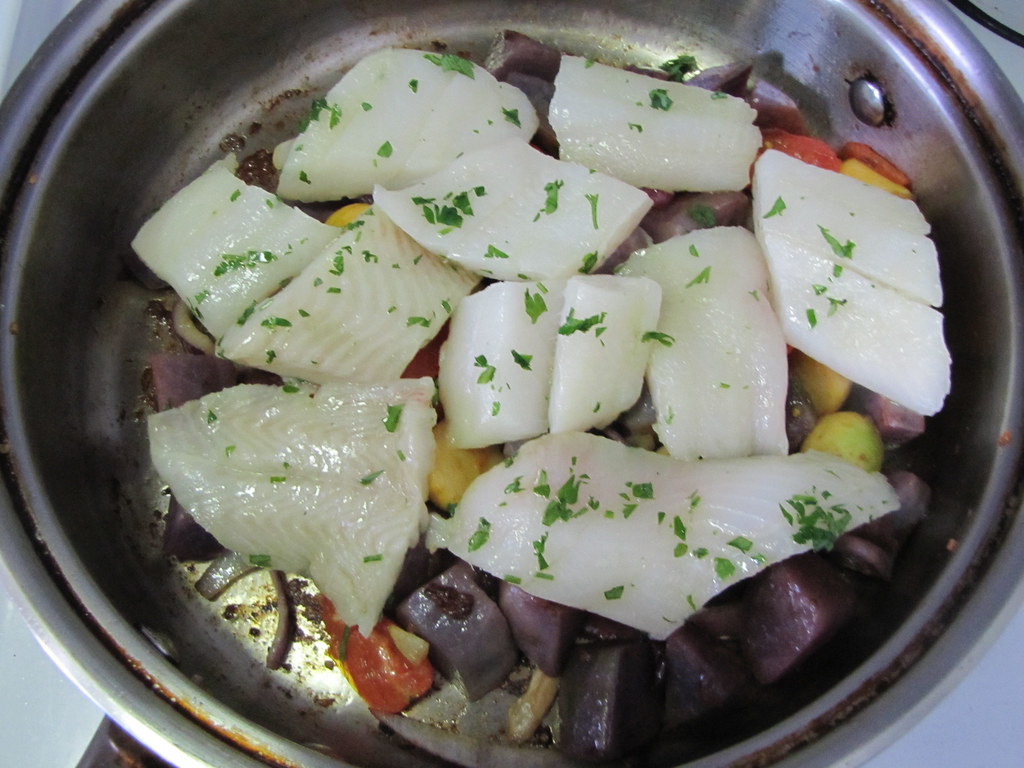 fish is arranged on top of the vegetables, before covering to steam

You can create similar lightly-cooked applications of fresh fish by gently roasting or broiling, or using parchment paper to seal your fish and vegetables into neat bundles that go into the oven. But it’s for the hands-on control of what’s going on in the pan, and that amazing sauce of everything in it that I prefer this method the most lately. Plus, it’s really easy, quick and there’s only one pan to clean up.

Cut the fish into roughly 2-3 inch pieces of equal volume. Season with salt, pepper, a tablespoon or two of olive oil, about half the lemon juice and half the chopped parsley. Cover and chill while you prepare the rest of the ingredients.

Heat a heavy-bottomed covered pan with about a tablespoon of oil and cook the onions over medium-low or low heat until translucent and lightly caramlized, about 6-8 minutes. Clear aside the onions from the center of the pan and add the potatoes and turnips, along with another splash of oil if necessary. When vegetables begin to crisp up, add the tomatoes and smashed garlic to the pan. Cook, stirring frequently, for another 2-3 minutes and season with salt and pepper. Once the potatoes are about halfway to becoming fully cooked, place the pieces of fish on top of everything in an even layer, making sure that none touch the bottom of the pan. Squirt with lemon, reduce heat to medium-low, and cover. Let cook for about 10 minutes without opening. Once opened, inspect fish to see if each piece is completely opaque (cooked) rather than translucent (not cooked). Top with remaining lemon juice, parsley and transfer to plates to serve.

Three brownie points: A solid score, thanks to well-rounded nutrition and minimal yet healthy fats. Like omega-3, found in all seafood, and heart-happy olive oils instead of butter (an all too common accompaniment for all seafood). If you see wildly colored potatoes instead of just white or yellow-fleshed — and especially if they’re the same price as the aforementioned, as at so many Greenmarket farms — then by all means, stock up, they’re slightly higher in antioxidants. Turnips too are no slackers when it comes to vitamins, providing fiber, potassium, and lots of Vitamin A.

Seven maple leaves: The intent was to keep this meal as close to the season and local specialties as possible, but alas, some things just get tossed in sometimes. Like the grape tomatoes, a total last-minute add, but one that really gave the dish the sweetness and acidity that it needed. That, and the lemon, which is far from local or seasonal around here as well. The first run of this recipe with hake kept the main protein within state distance, caught in Long Island by Pura Vida Fisheries; though the turbot was US Pacific wild-caught, according to Whole Foods. But the most important thing to consider with fish is perhaps not locality, but its state of endangerment due to overfishing. And it is only from checking in the aftermath on Seafood Watch that I find that Atlantic hake is indeed overfished. Good to know.