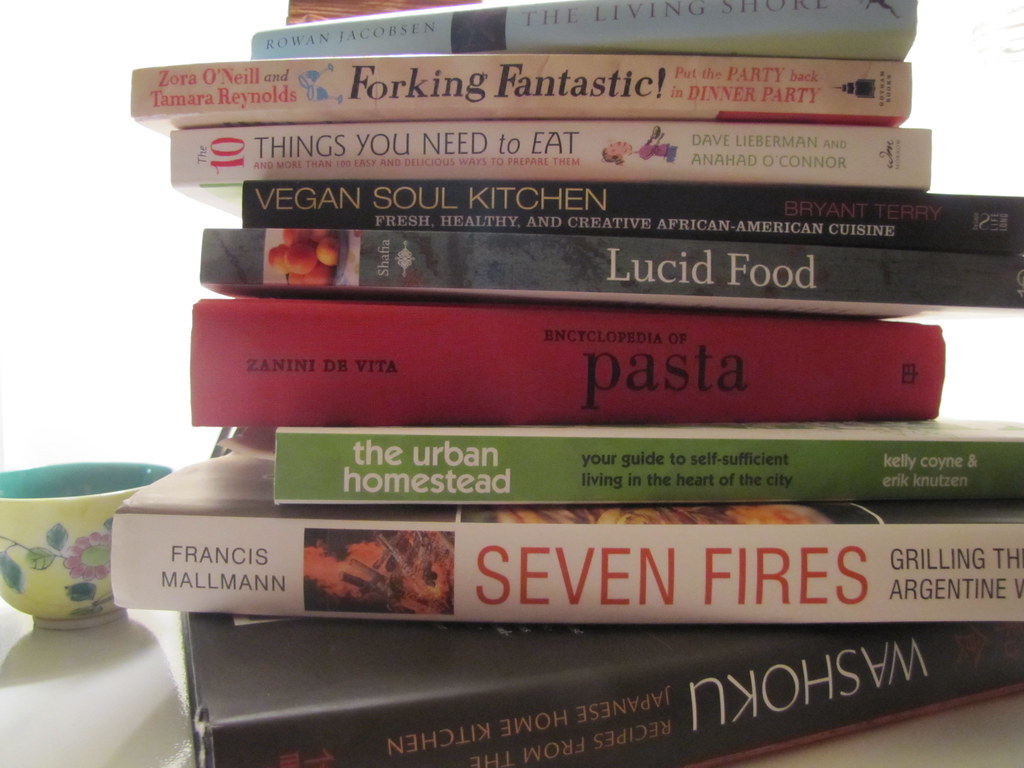 My bookshelf overrunneth. I used to feel this rush whenever my fridge was brimming with food, usually after a summer CSA pick-up, and the need to immediately bestow this farm-fresh goodness upon everyone I knew. I can’t give away all my books, however, and lending only goes so far. But I still want share this bounty of great food literature, somehow. They say that book publishing may be in danger, but according to Lynn Andriani, who moderated a panel on “The Future of Food Writing” last week at Housing Works Bookstore, food-related titles have actually increased in sales last year. And 2009 saw a great deal of really good ones. Here are some of my favorites, for what it’s worth. I’ve enjoyed reading and getting inspired by them, and it’s only fair to give credit where it’s due. I hope you find them fascinating, too.

You think, flipping through the vivid pages, I don’t have a spit, or a pasture of livestock, heck I don’t even have a backyard, so how on earth am I going to “grill the Argentine way?” Well, accept this fate: yes, the book may be aspirational — although many of the recipes are completely practical for the small kitchen — but it’s a rich lesson in a culture, cuisine and the open flame. One that might push the modern boundaries of “taste” in more ways than one, too. It would be a sad fate for food writing if the same reader can’t be expected to enjoy both seeing an image of a whole lamb on a stakelike spit on one page, and reading about the intricacies of the taste of burnt tomatoes on another. (If chefs and other folks who are obsessed with food are more thoughtful in all sorts of sensory pleasures — and this is a theory I support — then I can see it in Mallmann. Peter Kaminsky tells me he would be a ringer for next week’s Sex and Food night at the In the Flesh reading series: “He makes Courbet’s “The Origin of The World” like the work of a staid Victorian Miniaturist.”) 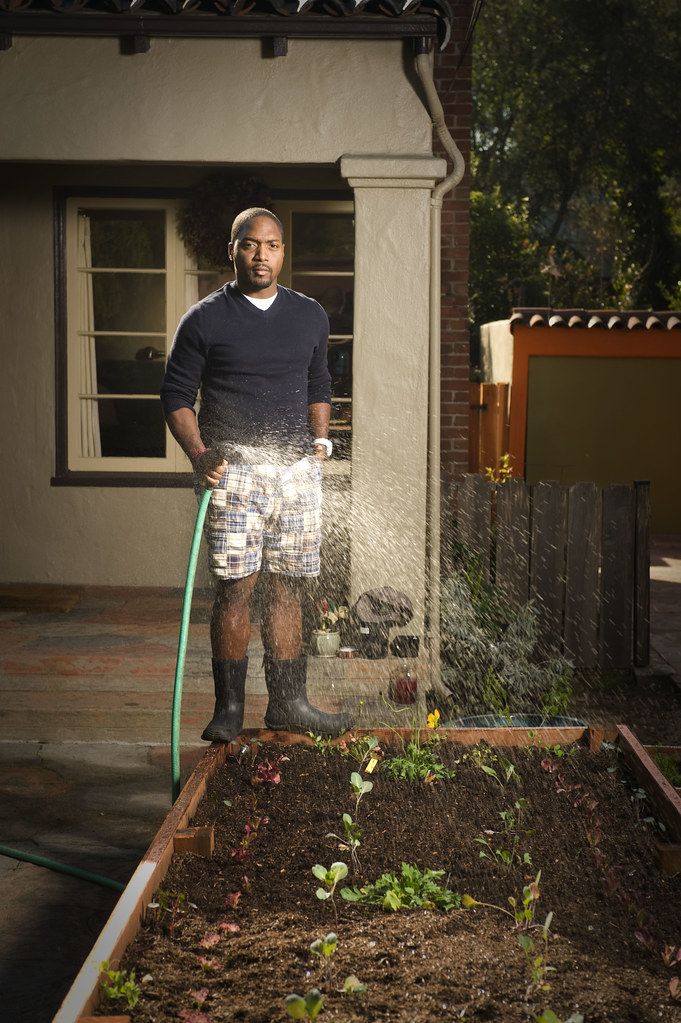 Bryant Terry in his element

Bryant Terry is a pioneer food justice advocate, and in my book, for that reason alone he is like a god. Then there’s Bryant Terry the chef, a wizard-like warden of all things delicious, who enmeshes his politics into every ingredient choice and simmers seitan with red wine, creams grits with cashews and makes dirty rice clean and healthy. Look, I’m not a vegan nor a soul food fanatic, but this is just an insanely good cookbook. Terry chose one of the least likely cuisines to reinvent with all-vegan recipes: American soul food. For any meat-happy skeptics out there, Bryant Terry can tear you a new one. Don’t mess with this guy!

A book with an exclamation mark in its name is filled with obvious zeal, and raucous, delicious dinner parties are the focal point for the endearment in question here. Zora and Tamara’s recipes are tried-and-true crowd-pleasers you won’t have to worry about making everyone full and happy preparing for any party, or bringing to a potluck. And they show plenty of evidence through photos of their real-life dinner parties, which they open up to strangers and friends alike on a regular basis with their supper club, Sunday Night Dinners. Cooking in is cool, family-style servings are hot, and sharing and caring is what it’s all about. Makes me want to slap the book shut and text my contact list to come over as I dash out to the market.

What? You don’t know what cuzzetielle is, or the gnocchetti sugeli, often served with fermented ricotta? Or how about that pastasciutta means dry pasta, or that foglietti is actually a Jewish pasta, made in the Ancona region, and means “little leaves”? Okay, well, now you can. Oretta Zanini de Vita has done the world a great service by seeking out every pasta shape that has been made, that still can be researched, and that each serves a fascinating story in the lexicon of food history with this astounding volume. By doing so, she spoke to elderly people all over Italy, whose recipes are mainly oral, and transcribed them meticulously. I’m so impressed I could torchio with gioia.

Lucid Food: Cooking For An Eco-Conscious Life by Louisa Shafia

If the lucid photos of heirloom vegetables and recipes for fesenjan (chicken in pomegranate walnut sauce) or imazushi (stuffed tofu pockets) aren’t enough substance to win you over, it’s the friendly and instructive tips for no-waste entertaining or composting for beginners. This book takes a look at the big picture of food, cherishing the healthy and seasonal, and keeping readers aware of the little ways in which they can make a difference by “greening their cuisine.” Separated in sections for each season, the book takes it all into consideration: sustainable seafood choices, earth-friendly alternatives to white sugar, and puntarelles with anchovy dressing in equal toll, making us realize how eating is, as Wendell Berry said, “an agricultural act.”

The Living Shore: Rediscovering A Lost World by Rowan Jacobsen

I can’t eat oysters anymore without thinking of shell middens: giant, pyramidal, prehistoric compost piles. This shellfish has a storied history with our New World predecessors, as they have in our culture, but we’ve always depended on them in more ways than as a delicacy. In this book, Jacobsen and a team of marine biologists set out to discover the last beds of the rare Olympia oyster in British Columbia — and the reason for their near-extinction — while laying out the urgency of their mission. Oysters filter water, creating healthy and productive eco-systems; without them, we wouldn’t, couldn’t have ended up where we are. And with them in peril, so is our civilization as we’ve built it. Something to slurp on.

runners-up that I haven’t read fully but feel are mighty fine:

Momofuku by David Chang and Peter Meehan
My Nepenthe: Bohemian Tales of Food, Family and Big Sur by Romney Steele