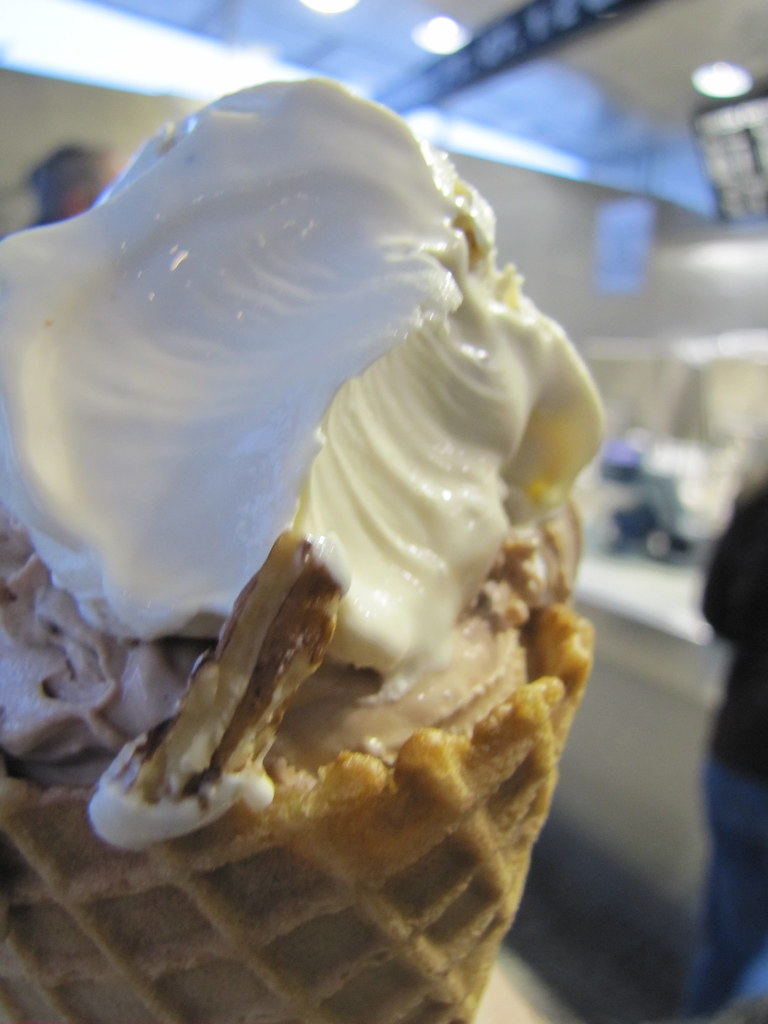 Ice cream versus frozen custard: the parameters are loose. Frozen custard, like its less-cold forebear, engages egg yolks in the emulsion, but so does rich ice creams. Wikipedia attributes it to a higher temperature than ice cream when served; also, its production to a fast-freezing barrel that churns out the product more quickly than traditional ice cream makers. The entry states, “Frozen custard is usually prepared fresh at the place of sale, rather than stored.” They both can be served by the scoop, or in soft-serve form. In my estimation, there is little difference between (very rich) ice cream and frozen custard, except that frozen custard is not designed to be, and is therefore not typically, made at home. And I’m not at home, haven’t been for a week — I’m in the frozen custard capital of the world.


I’m a strong believer in eating whatever’s plentiful when traveling in unfamiliar territory. There is no greater failure for the food-obsessed than to refuse some regional specialty, whatever it may be. So while taking a sojourn outside of Milwaukee this holiday week (my first time in the Midwest), I ate lots and lots of frozen custard, washed down with malt shakes and local beers. I’ll think about the health repercussions of that theory if I happen to be traveling in the Midwest again very soon.

The first stop was at Kopp’s Frozen Custard. The most well-known of a small handful of regional chains of its kind, it was the only one I’d caught wind of in NYC. There are also numerous freestanding mom-and-pop custard and burger shops, as a drive through rural parts can evidence. I didn’t have the time nor the tenacity to try everything, but I did know that a stop at Kopp’s Greenfield location was not to be missed. One step inside proved there existed a new order of fast food for me: everything was immaculately clean, from the brushed stainless steel counters and custard-spewing nozzles to the crisp white aprons draped across the staff’s adorably oldschool soda fountain-style uniforms. While the signs outdoors promised only custard and burgers, a full-fledged menu of fast-food sandwiches, sundaes and sides was available. But let’s focus on the frozen custard for now. The chain produces two flavors of the day, in addition to their everyday staples, chocolate and vanilla. The daily specials are displayed prominently on signage indoor and out, there’s a “flavor forecast” for the upcoming days on an overhead menu, and there’s even a site called Custardlist, which compiles the daily flavors at many frozen custard places in the area. The flavors of the day when I arrived at Kopp’s were butter pecan and chocolate malt. Had them both as a two-scoop on a waffle cone. (Pictured at top.) 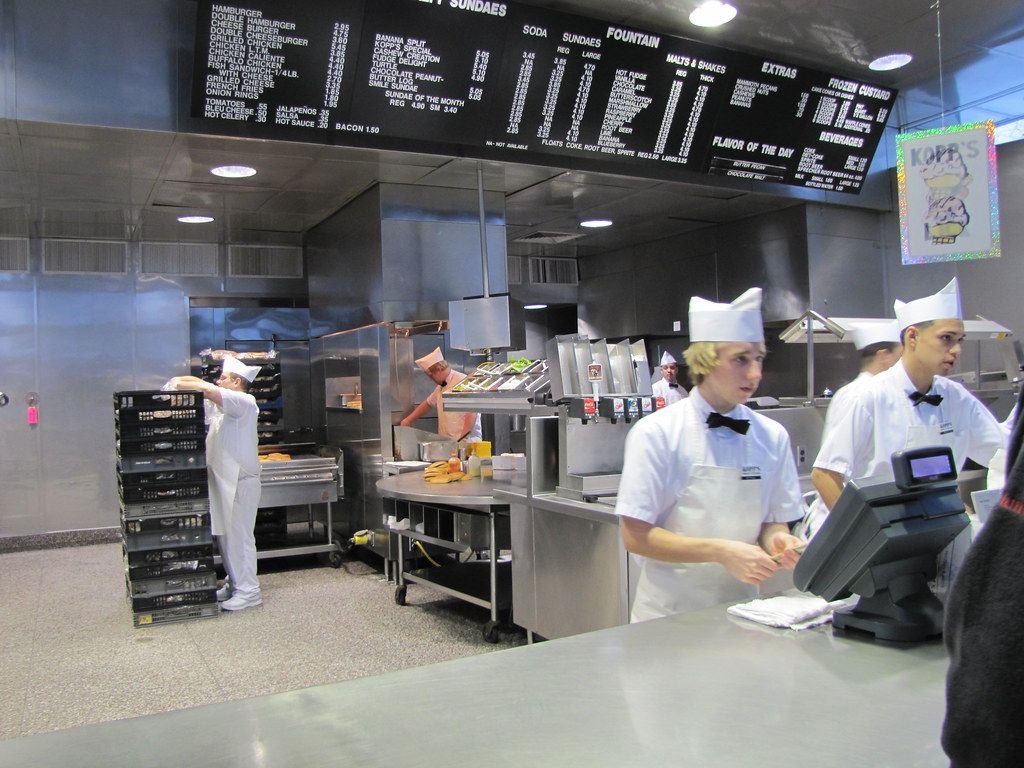 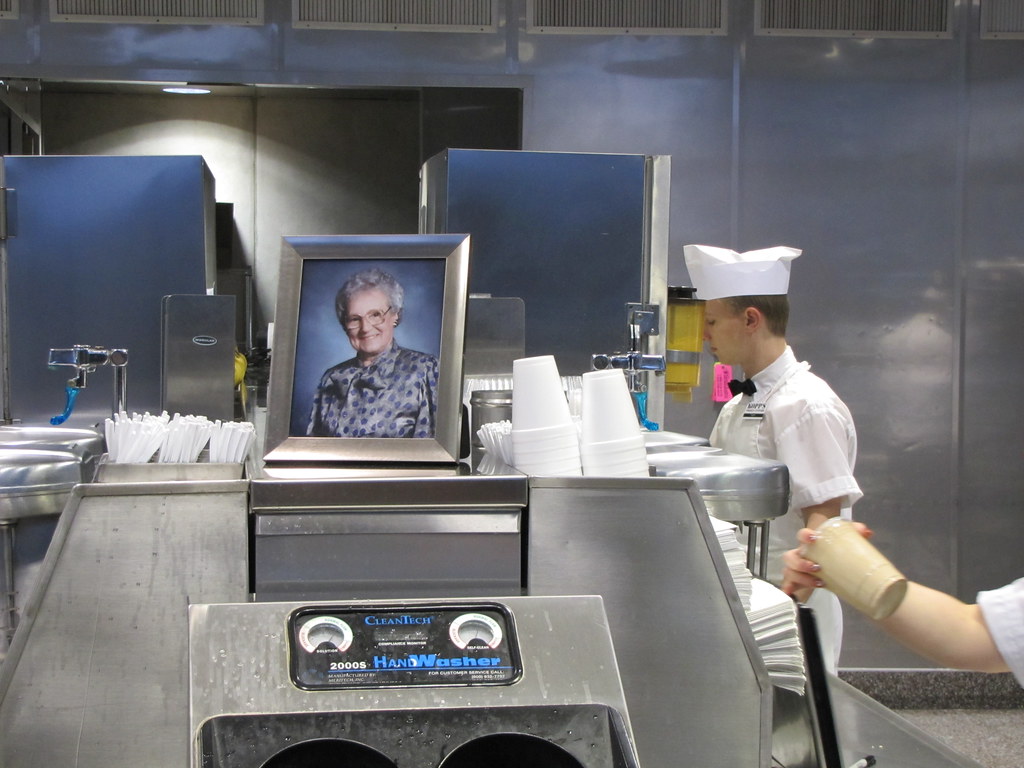 It was a new sensation, like the rest of the place. Dribbling just a little onto the cone in the few seconds in which it had been passed to me, the custard was silken and soft in the most lickable way. (You know when you make a lick for a hard scoop of ice cream, and don’t lap much up? This would never happen here.) Its texture was complemented by whole — not chopped — pecans that were perfectly roasted and very lightly salted, and they were supernaturally crisp for being submerged in the creaminess. I’m usually wary of the flavor butter pecan for ice cream, because short of studding it with the nuts, there’s no way to get the flavor of buttery caramel-coated pecans steeped into the cream. So it’s “natural” flavoring all the way. Here, the flavor was mild, and obstructed in the most delightful way with the actual pecans. The chocolate malt flavor in the bottom scoop was equally appealing, though less showy. By my last bite of cone, I knew I was dealing with something seriously deep-rooted and religious here. I shied away toward the exit and backed out the door, holding my malt and burger bag hostage. 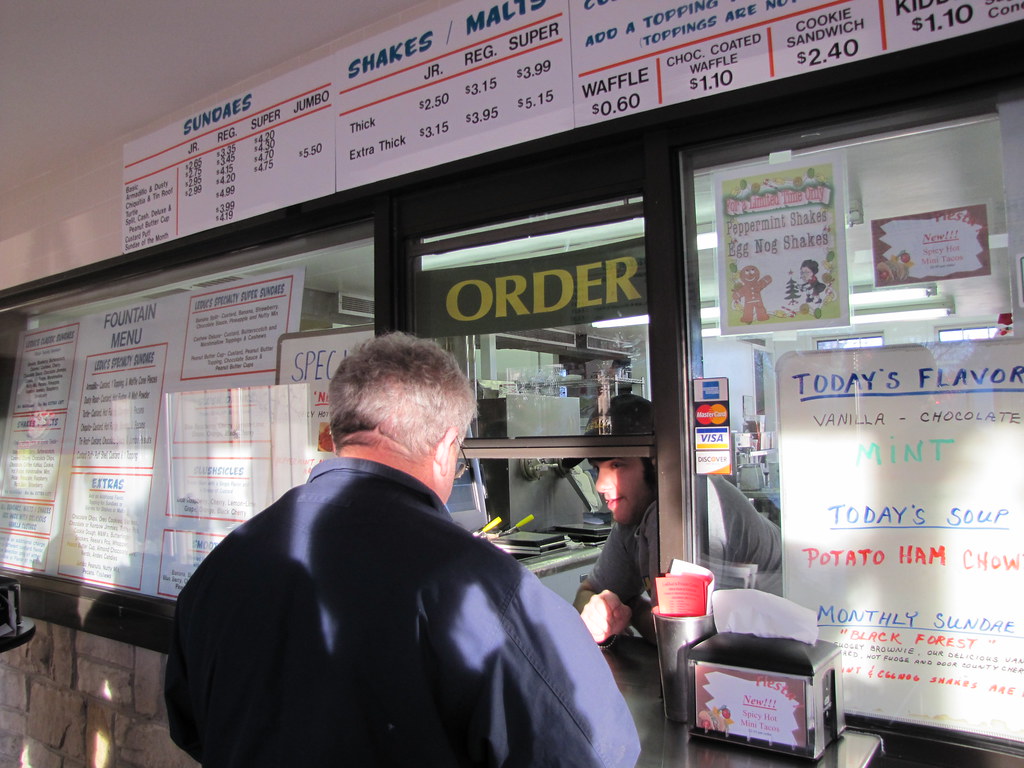 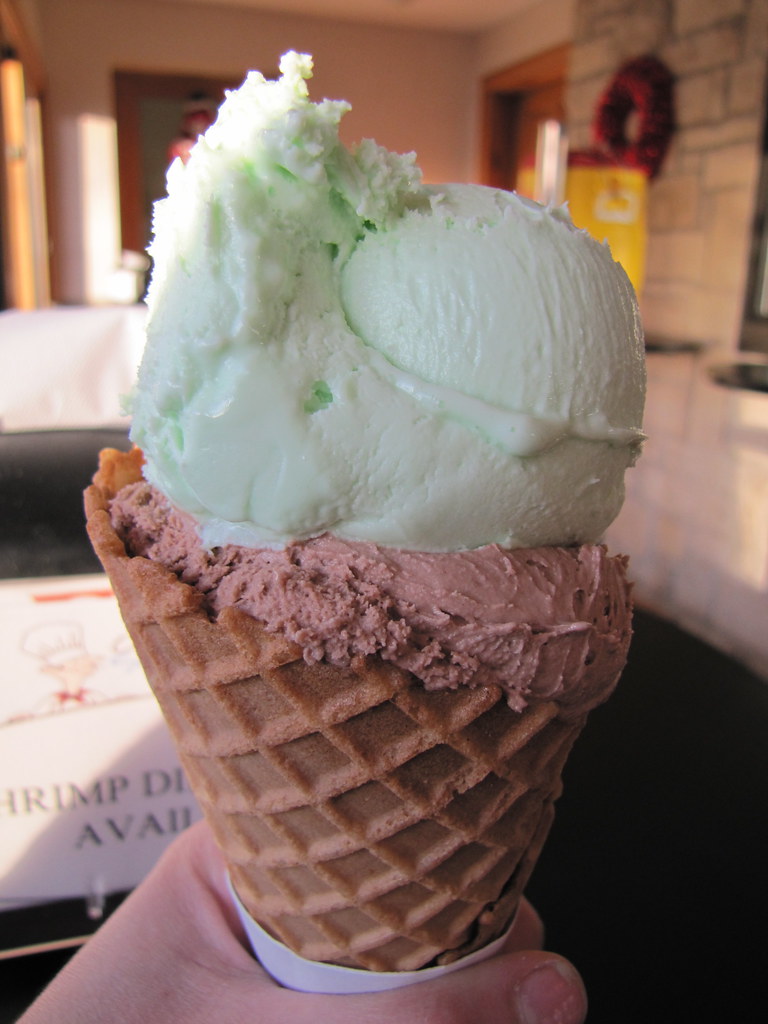 The next day, I headed out for some fresh blood. The taste of Kopp’s frozen custard had stayed with me all night; it was neither too dense nor too light, a texture to obsess over. So when I walked into the one-shop frozen custard and you-name-it greasy food spot, LeDuc’s, I expected nothing less. I was majorly disappointed. I’d at first thought the place’s humble exterior and scribbled-by-hand signage to be charmingly simplistic. The sole flavor of the day, for example, was mint, and it was written in thin marker on posterboard placed before a front window. No more romance to its name — it was not peppermint, or mint chip. After one taste, however, the slacker ethos went underneath a harsher light. 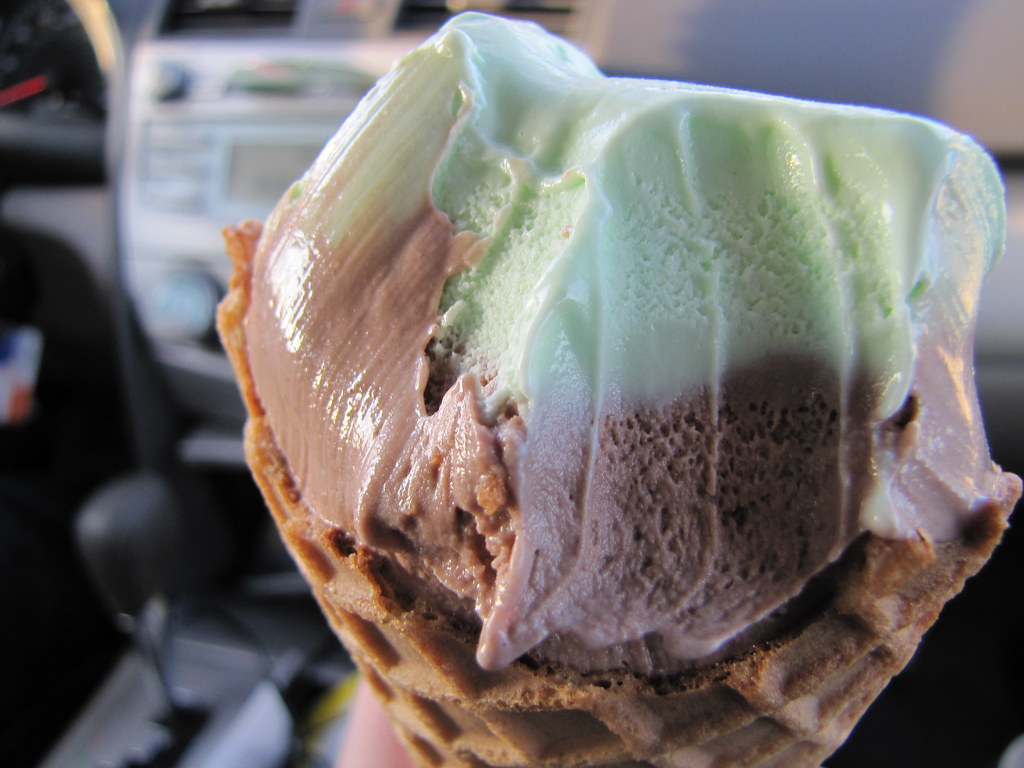 The custard had nothing of the texture of the day before’s binge: it was airy, and subtly grainy, rather than liquid-smooth and rich. While the pastel-colored mint flavor was nothing to get offended nor excited about, the chocolate scoop tasted dreadfully synthetic. My palate was unwittingly reminded of cheap plastic cups of chocolate and vanilla ice cream from the grade school cafeteria, which were consumed with a flat wooden pick instead of a spoon. The waffle cone encapsulating the custard here was also inferior, tasting and feeling like puffed-up rice starch. I didn’t try any of the food at LeDuc’s, but signs around me in the tiny space showed they had much variety — “family shrimp dinner,” one said, and “mini tacos” were advertised on another. Despite my underwhelming experience, this place was packed with people at 3pm on a Tuesday. The stuff floats many peoples’ boat, it seems, and I’m just a beginner here. 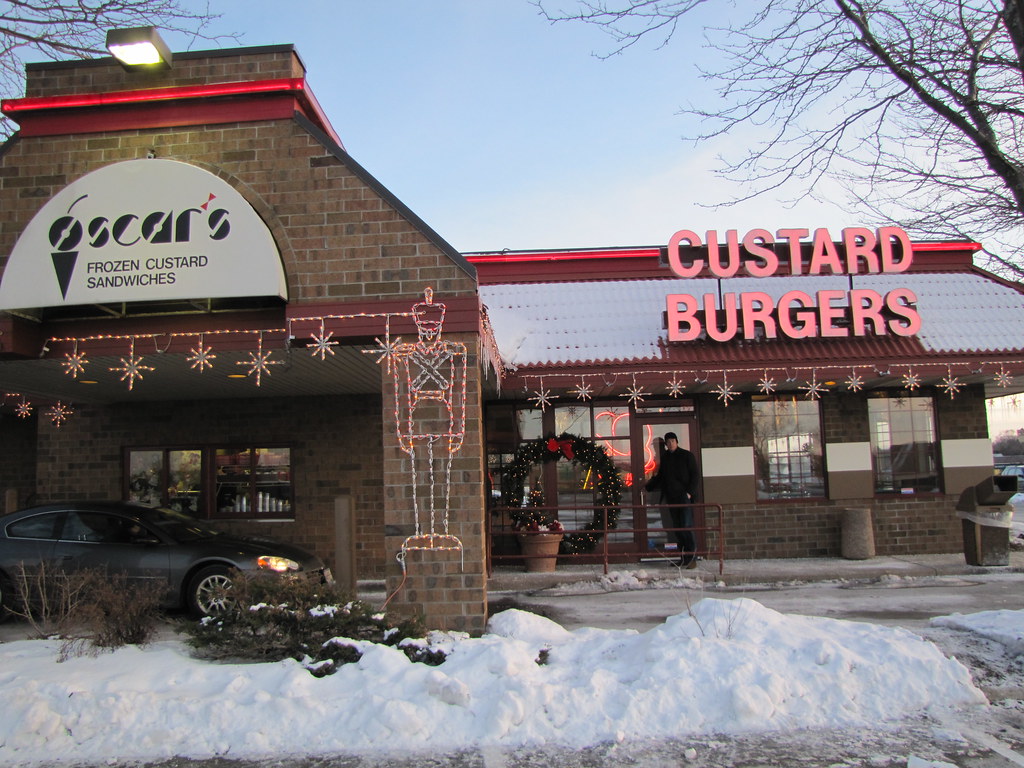 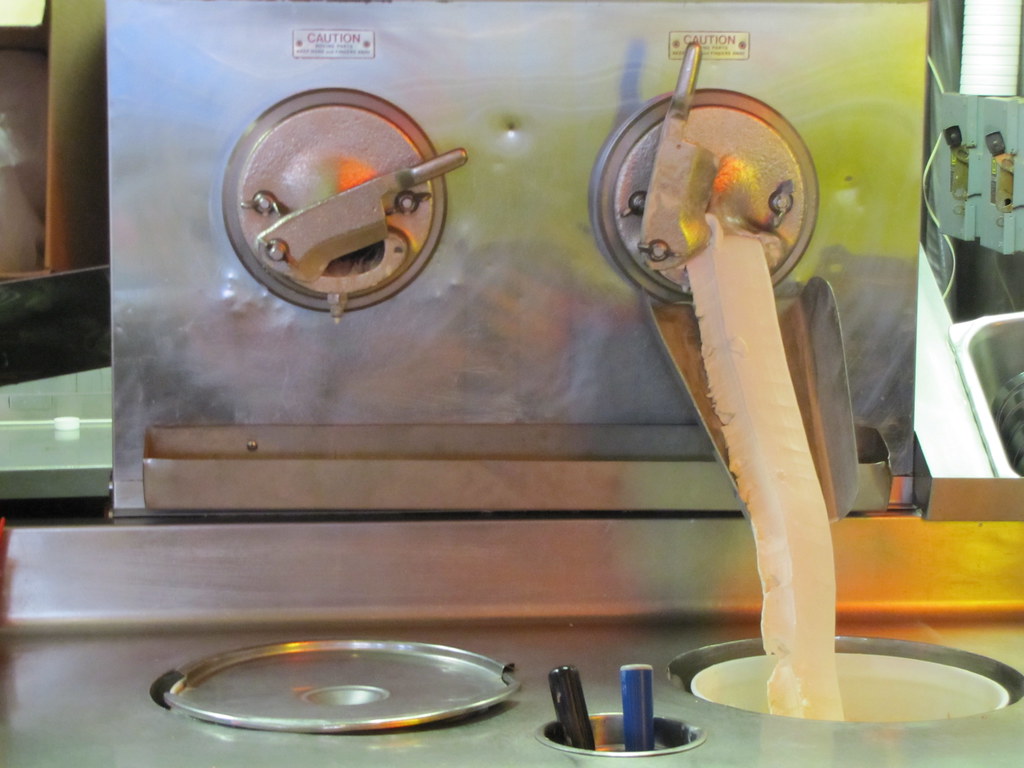 My next stop proved much more satisfying. I headed to Oscar’s, one of its two locations in Waukesha, WI, and braced myself for an artificial onslaught when I saw that one of the daily flavors was strawberry. But, one of Oscar’s claims to fame is that it pioneered the homemade waffle cone, and a stack of them behind a glass window did look pretty good. “Homemade” could also be found before many of the menu items on a neon-lit overhang, to my surprise, and I ordered a cup of soup not for best pairing purposes, but curiosity. I was skeptical about the strawberry flavor but the thick, goopy tower of pink-colored custard that was handed to me after ordering was clearly the real thing. Strawberries, softened to completely iceless submission, were so scattered throughout this scoop of custard that they almost fell onto the table without instigation. I sat down and ate; it was the best strawberry ice cream, frozen custard, frozen yogurt — heck, frozen dessert — I had ever tried. Not in the least artificial. 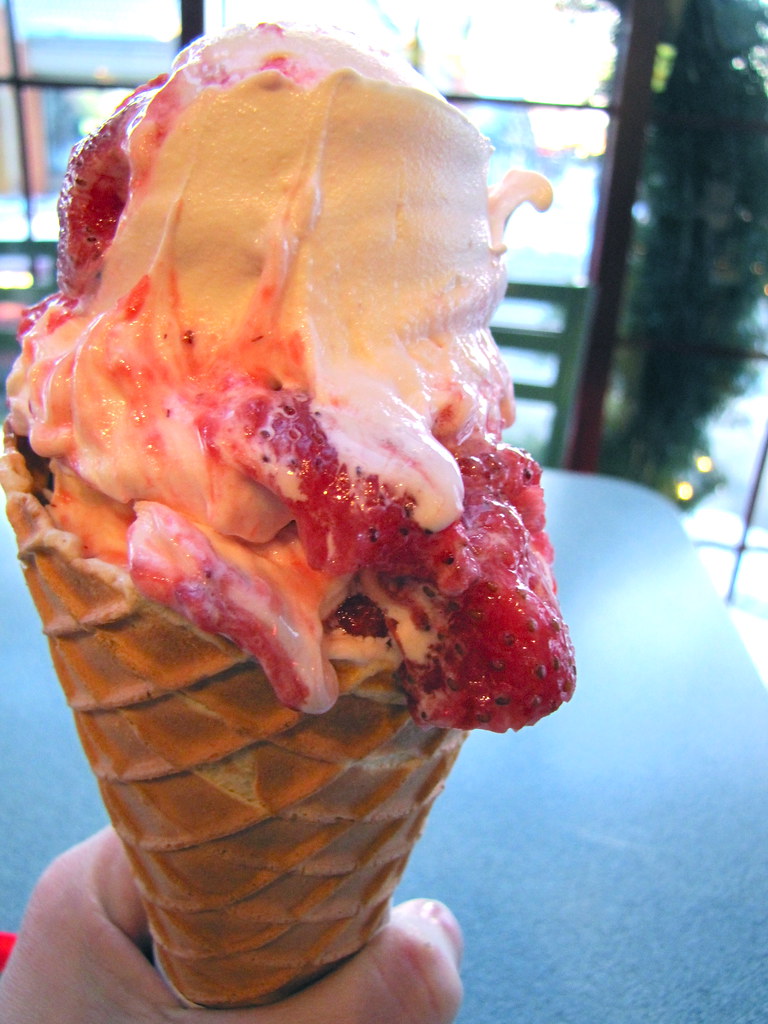 a scoop of strawberry frozen custard at Oscar’s 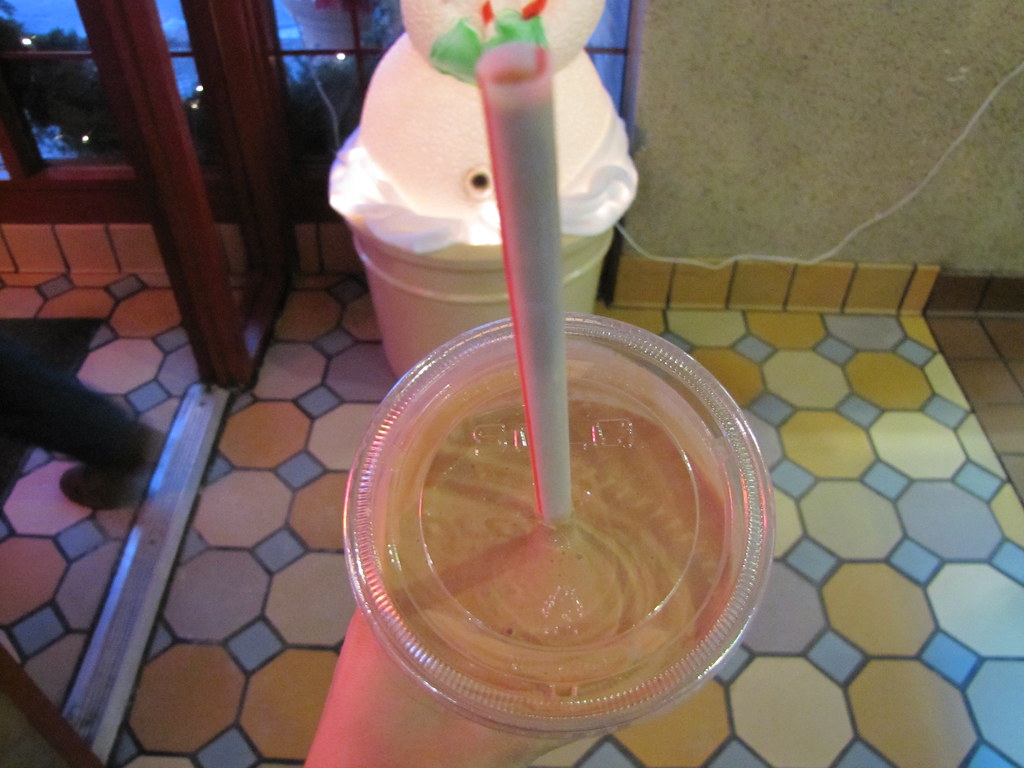 
But it wasn’t only the custard here that was awe-inspiring. A cup of chocolate malt (that’s milkshake, with malt powder) was richly distinct. At Oscar’s, malts come in two thicknesses: regular, or extra-thick. I tried the regular, and it was not only suitably thick, but deeply flavored of both malt and chocolate in a way that far surpassed the malt I’d had at Kopp’s the day before. You could even detect miniscule crystals of the malt powder with a slurp. And the homemade waffle cone here lived up to legend: it would have been perfectly fine to eat as a cookie.

I needed a good comparison. The bar had been set in this ridiculously sparse survey by Kopp’s, and so I went back there, only to a different location in Brookfield, WI. The two flavors of the day then were cookies ‘n cream and midnight chocolate, and those stacked upon one another made for an impressive, fully-loaded cone. While I’m not partial to Oreo cookies in my ice cream, the first slurp from this spheric mess proved my memory correct: the texture of Kopp’s frozen custard was a cut above both the others. This location was not as swank as the Greenfield one I’d gone to earlier, but the visit served its purpose, as well as served to satisfy me of custard for months, and hopefully more. Oscar’s had this chain on the chocolate malt, however. The malt at Kopp’s was too thick, for having only one option of thickness, and its pale color in comparison to Oscar’s chocolately creation betrayed its far milder flavor. 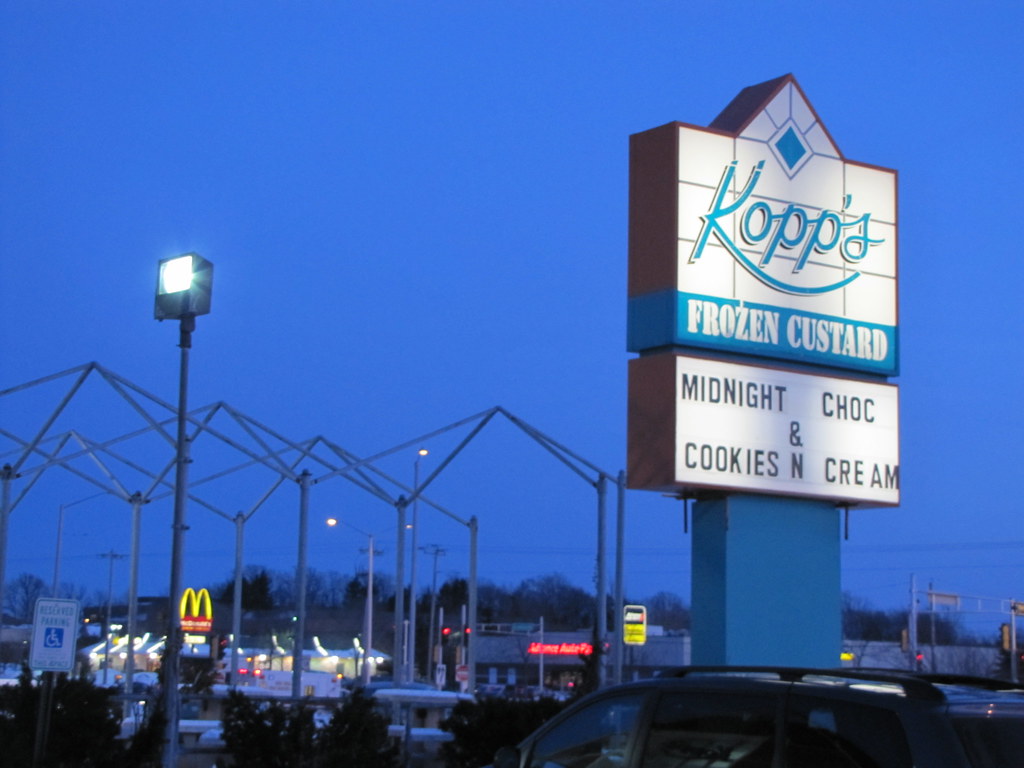 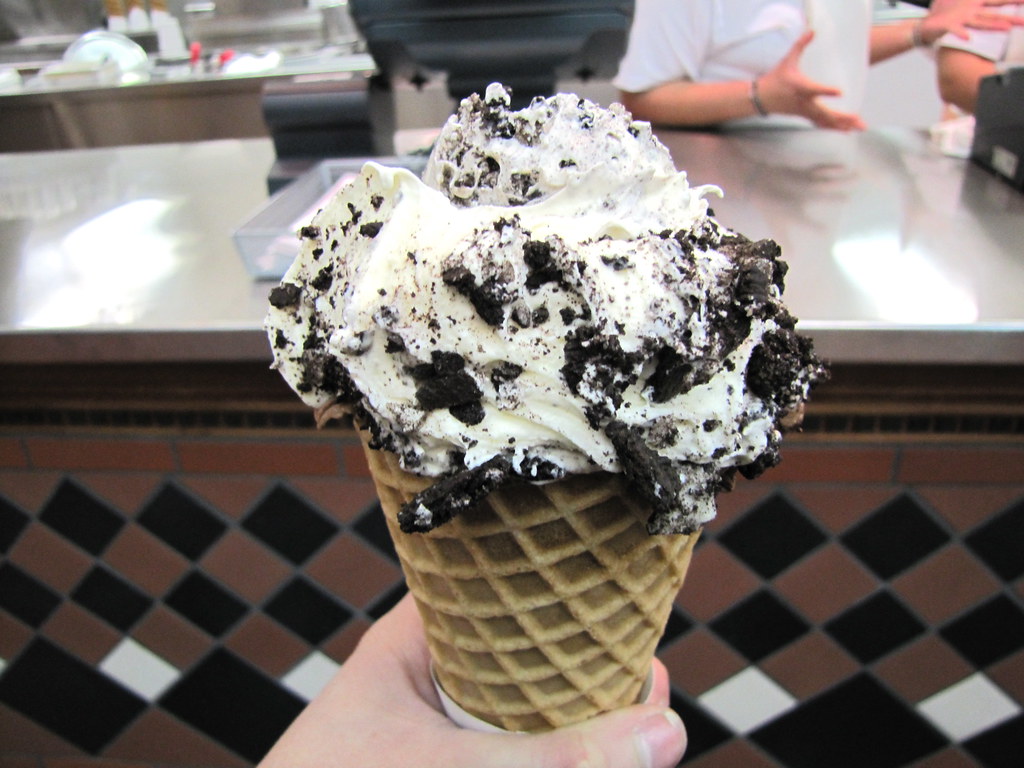 And what of the other amenities at all three of the businesses I visited? Yes, I only ate at four frozen custard joints, and didn’t try nearly all of their offerings. While I appreciated the homemade fast food at Oscar’s (and its half-eerie, half-cheery pink and blue neon signs that rendered everything David Lynch-lit), the potato soup I tried was nothing to write home about. It was not condensed, or full of additives, and that should be its crowning achievement, that it was actually freshly made. A fish sandwich ordered at Oscar’s was an unfortunate mistake, fried and flattened so that the breadcrumbs made up most of its mass. It was the hamburger at Kopp’s that sealed the deal for that joint’s superiority for me, once and for all. This was a $2.95 hamburger, ordered with a customized choice of optional toppings (pickles, sauteed onions, lettuce, tomato, mustard and ketchup). It was easily twice the diameter of a slider, which I’d half-expected at that price, and it had a distinct, freshly grilled deliciousness. This is another story, and fodder for an entire survey for the region on its own — hamburgers.

It’s been a while since I’ve posted about an eating excursion. Because, for all my hammering about Reasons for Not Eating Out, there are some things that just can’t be produced at home, and a world of food that you wouldn’t think to either, because you hadn’t tried them. Frozen custard embodied both of those. And now that I’m sated with the stuff, I can be pretty glad that it isn’t easily made at home. Just think of the brownie points on the Health Factor.