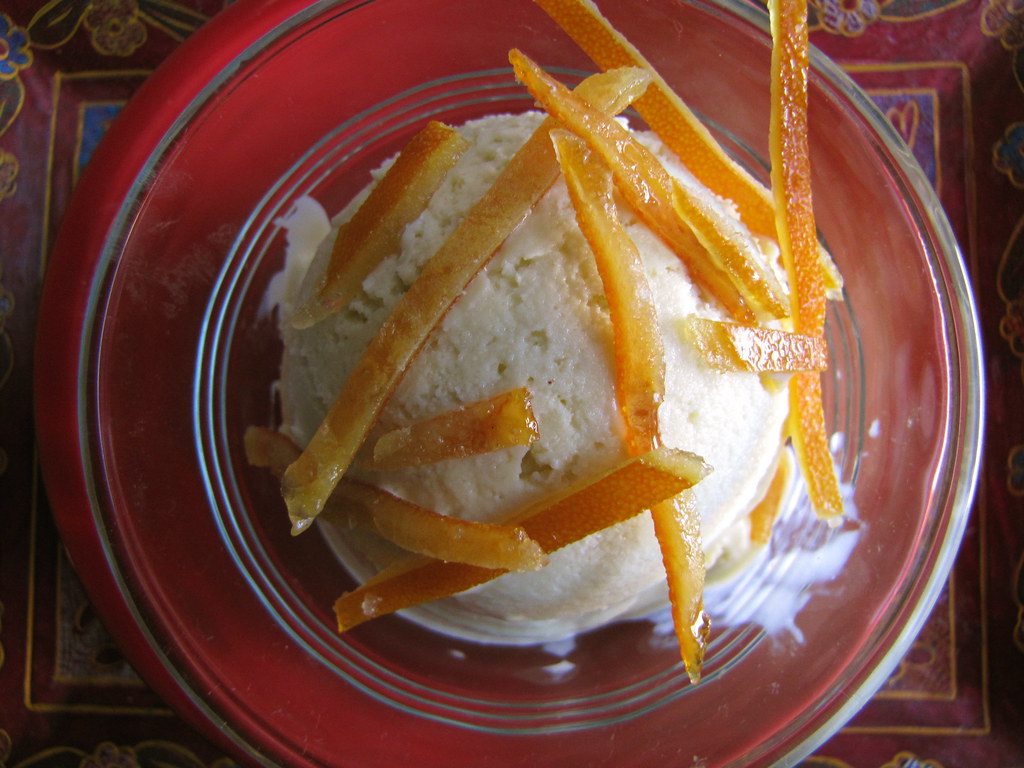 This ice cream flavor is an ode to sticking cloves in oranges around Christmastime. They turn out looking a little funny, and it feels a little bit voodoo doll-like doing it, but it’s one of those wholesome childhood traditions, and it makes the room smell good. Like orange and spice, and everything nice. This tastes good, too.


My boyfriend tells me that I’m going to have to take my ice cream-making to new levels after a trip to his home state of Wisconsin for Christmas. There, I’ll get to try Kopp’s Frozen Custard, the fabled foodie destination that I have never visited. Heck, I’ve never been to Wisconsin, or anywhere in the Midwest, either (except for a wee little wedding excursion way back, in Cincinnati. Remember that?). Apparently, in Wisconsin more eggs is more when it comes to making ice cream — I mean, custard. The dairy state? The stuff might have more yolks than cream. 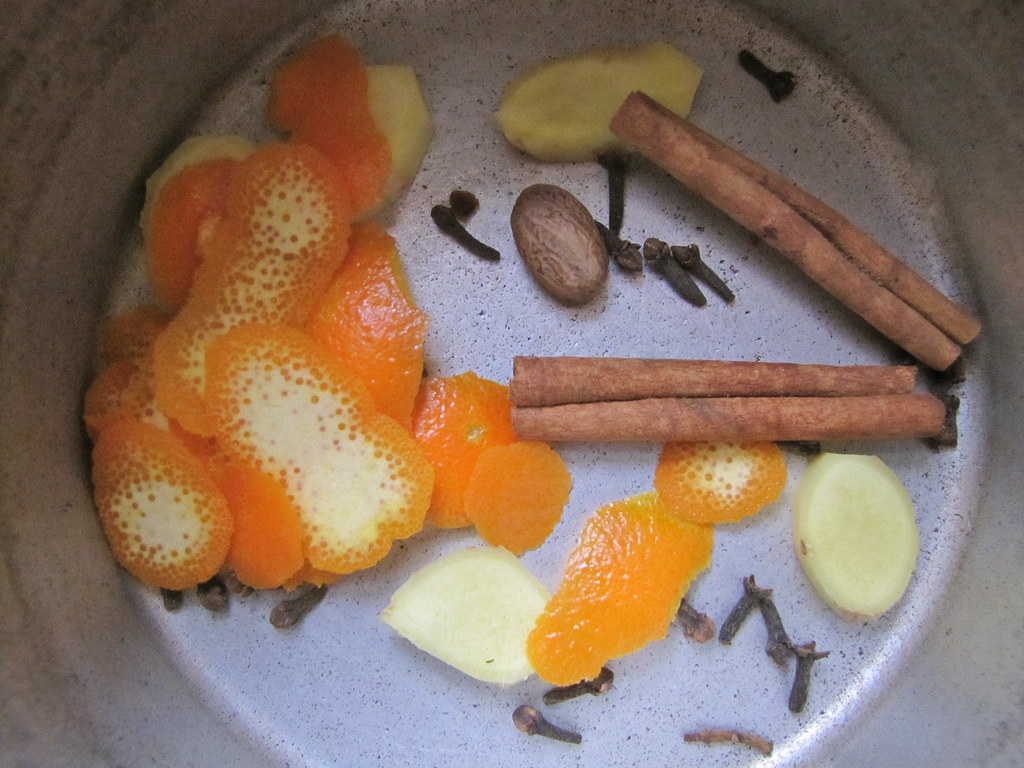 cinnamon, nutmeg, ginger, cloves and orange peel to steep the milk in

So until then, I’m churning out a few batches with my favorite formula. After so many different recipes, so many trials and tribulations, I’ve pinned down my own recipe for an ice cream base. I use it for every flavor, with some adaptation (if it seems necessary, for instance, to amp up the egg or cream if carrots are steeped in it, which will lend liquid, or to lessen these if something like peanut butter is going in). I’m not sure when it all came together, there was no Eureka moment or stroke of lightning, just lots and lots of experimentation (and saturated fat grams). A milestone was made, I think, with an anise and chocolate flavor, and from then on I’ve always used more yolks than previously. Which is to say that my current recipe is egg-heavy to begin with: 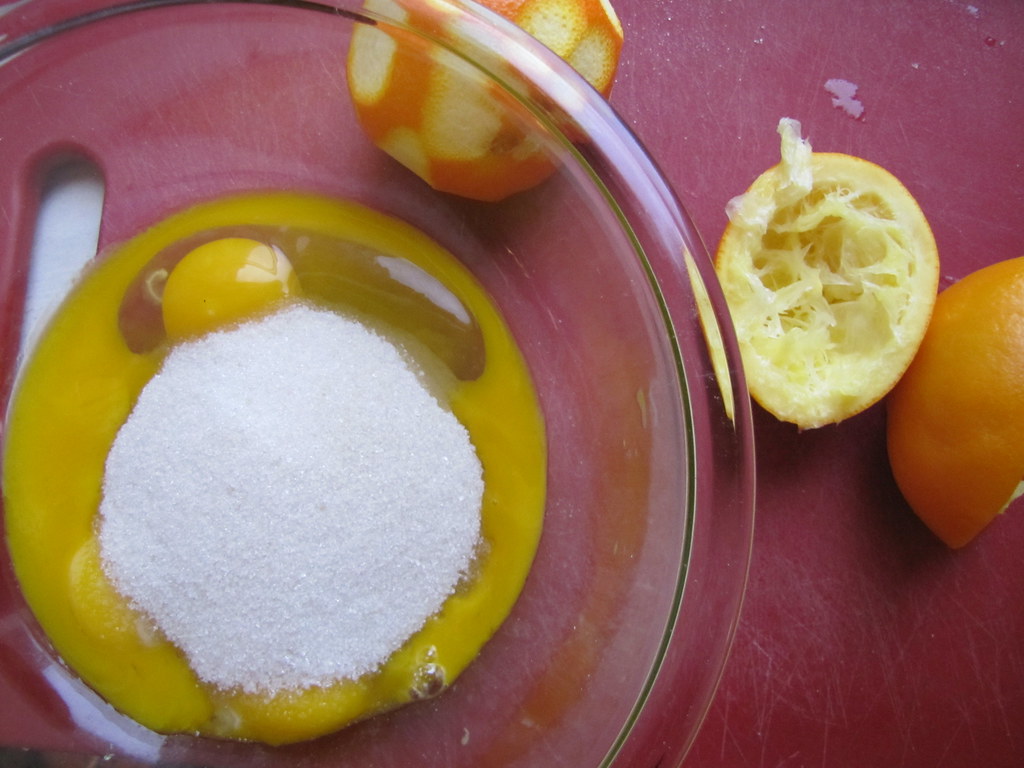 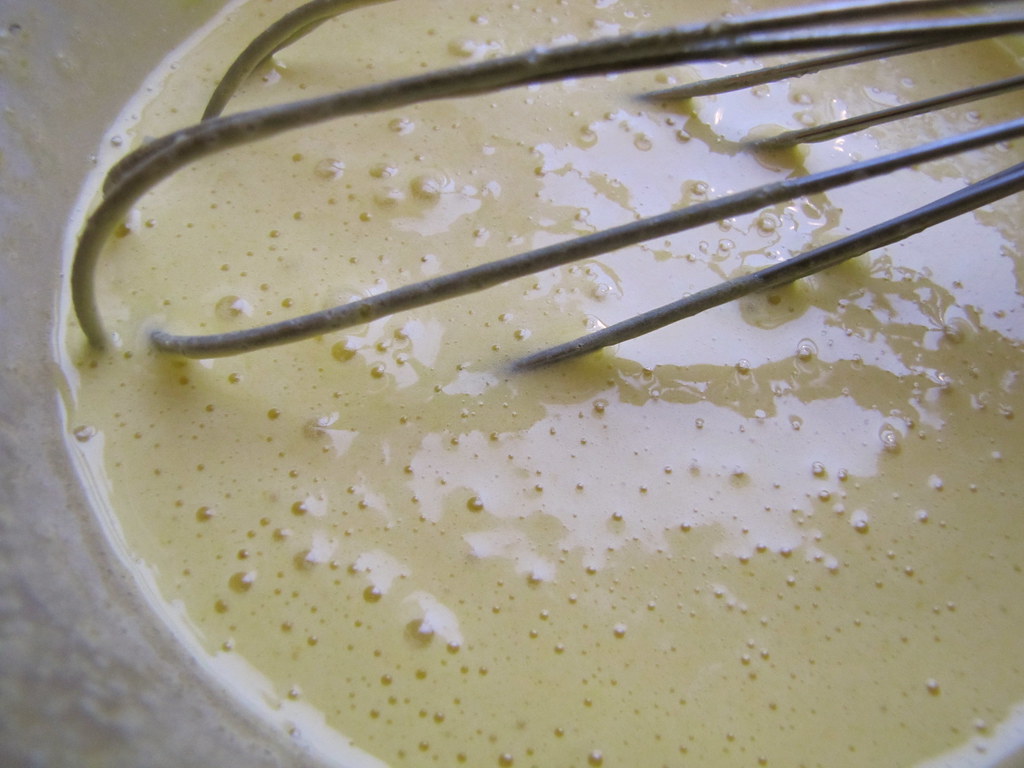 beating the eggs and sugar

It’s five egg yolks, and one egg white. So that’s one whole egg, and four yolks. And only good eggs, cage-free eggs that are fresh, fresh, fresh from the Greenmarket, so the yolks are plump and deep orange like a tangerine. One cup of cream, one and a half cups of whole milk, and likewise, this is the best organic milk you can find. Then, two-thirds to three-quarters of a cup of sugar, depending on how sweet you want it, or if there’s something else sweet going in. That’s it. What’s your way?

The next part of this recipe is for a little garnish or optional add-in to your ice cream, if you don’t mind a chunky texture. It’s candied orange peel, and it’s simply delightful — like an orange Fruit-Roll-Up. It’s also a great way to use up orange peel instead of tossing it in the can or compost (if you haven’t stabbed it with a million cloves, that is). Free candy! Well, almost. Now, making candied orange peel is tedious, but it isn’t hard. It involves changing boiling water five times, peeling pith away carefully, and getting stickiness on your surfaces. If you’d like to bow out now, I accept. But it’s a fun project and well worth the effort once in a while. 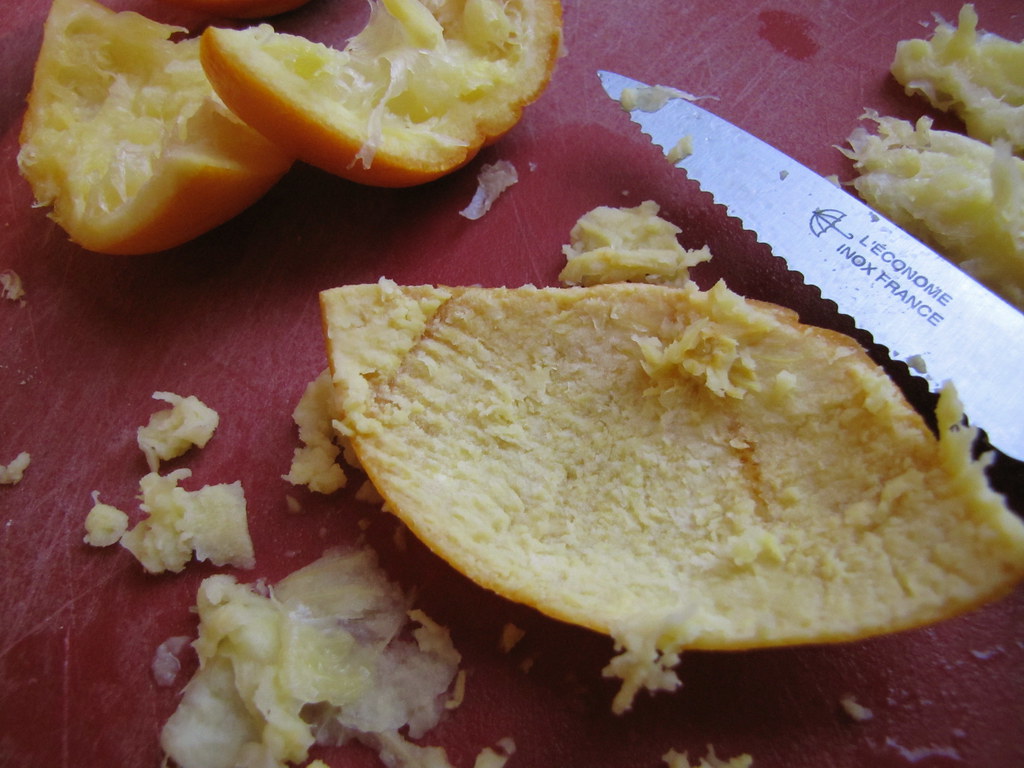 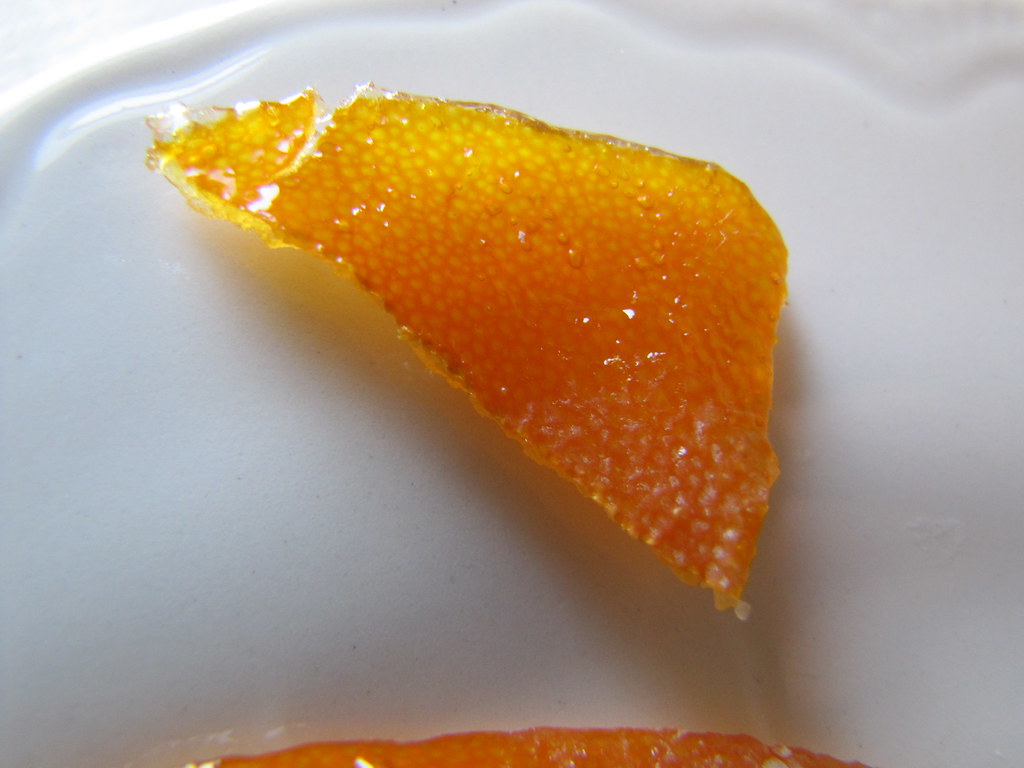 I actually meant to finely slice the candied orange peel when it was finished and sprinkle it into the ice cream as it was churning in the machine. But I forgot to when that was happening. So here it’s used as a garnish, and you can use these shreds as garnish in many other things: toss them in salads for a chewy-sweet touch, or put them in homemade granola or trail mixes. I’ll probably be doing many of these things in the aftermath, thanks to my oversight. That, and eating lots of egg whites (reserved from the yolk-separating task). I’ve been dropping them into hot soup a lot lately.

1 cup heavy cream
1 1/2 cups whole milk
4 egg yolks
1 whole egg
3/4 cup sugar
1/2 teaspoon orange extract
5 big strips ginger, peeled
about 1/2 tablespoon whole cloves
1 whole nutmeg
2 cinnamon sticks
(note on spices: you can use ground spices if you prefer, and you can use additional ones too, like allspice and cardamom; try adding 1/4 teaspoon each ground spice first and add more to taste.)
zest of 1 orange, cut off in strips with little to no white pith left on
1 tablespoon fresh lemon juice

Combine the milk and cream with the spices and orange peel in a medium saucepan. Bring just to a boil, stirring, then reduce heat to very low and continue heating for 20 minutes, without any boiling. Turn off heat and keep covered another 20 minutes. Strain the milk mixture and return to the saucepan.

Beat the egg yolks with the sugar and orange extract until light in color and fluffy. Temper the egg yolk mixture by adding a small spoonfuls of the hot milk mixture at a time, while whisking, until about half a cup has been added. Transfer the egg mixture to the milk mixture in the saucepan and stir constantly while cooking over medium heat until the mixture is just thick enough to coat the back of a spoon (about 8 minutes). Do not let boil. Chill in an airtight container overnight. Follow your ice cream maker’s machine to churn the ice cream. Halfway through the churning, pour in the fresh lemon juice (to keep it from curdling the milk mixture beforehand).

Candied Orange Peel
(makes one orange peel’s worth of candy)

1 orange, cut in half and juiced (reserve the juice for drinking or something else)
1/2 cup sugar
1/2 cup water

Bring orange halves to a boil in a small saucepan. Drain, and fill again with fresh water. Repeat process four times. Remove orange and let cool. Slice into quarters and scrape away the pulp and white pith from the zest; get as much of it off as you can without tearing the peels. Slice peels into fine chiffonades (note: in the photos above I went ahead with the next step without slicing them as indicated; I think it’s better to slice here rather than at the end).

Dissolve the water and sugar in the small saucepan to make a simple syrup. Add the orange shreds and bring to a boil. Reduce heat and let simmer for 30-40 minutes. Remove the candied orange carefully with tongs and set in a sheetpan to dry. Keep chilled in an airtight container for up to a few weeks.

Cost Calculator
(for 1 quart of ice cream and candied orange)

Eight brownie points: It’s beginning to look a lot like Christmas… calorie-wise. Ice cream may be ice cream, unavoidably rich and sweet. But as long as I can be satisfied with the outcome I’ll opt for less fats being more. This gets harder each time I try a richer ice cream and don’t want to turn back, but everything with moderation, as they say.

Six maple leaves: Why are we messing with oranges, in the cold of winter in the Northeast? Well, because it’s fun, and I can’t resist a little non-local flavor once in a while. Aside from that slip, the eggs, milk and cream are local and organic, and they really do turn out the best-tasting outcome.