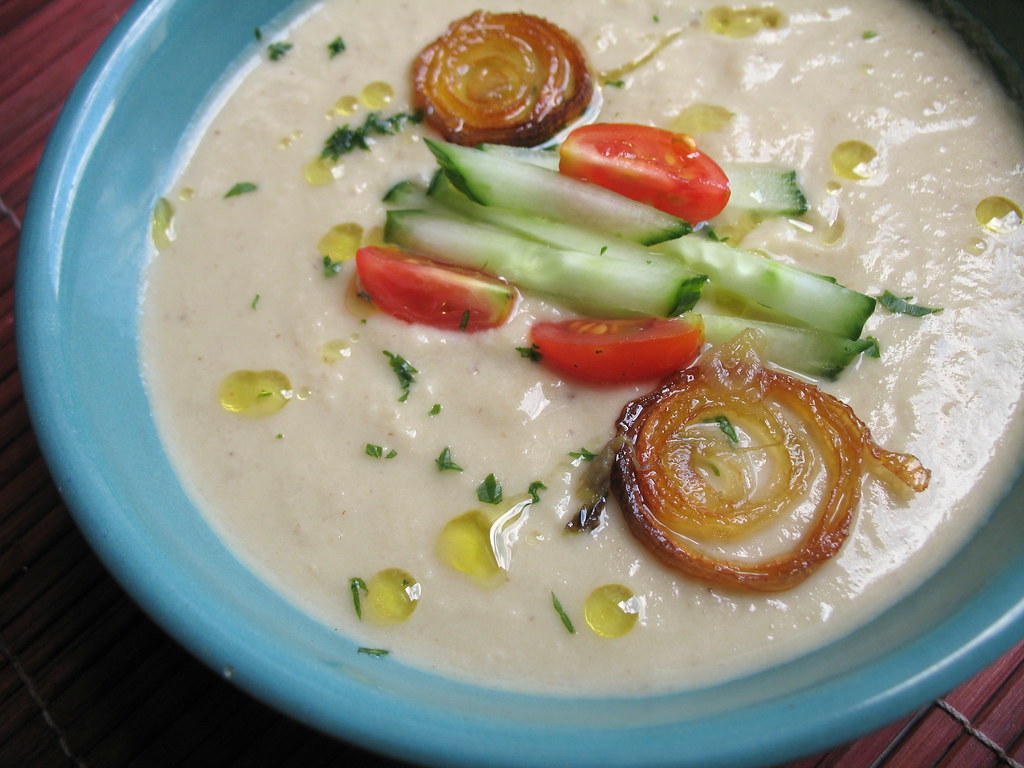 Some of you guys are gonna say off the bat, I don’t like eggplant. And hey, that’s okay. They’re squishy, mushy, weird and hard to pinpoint the taste of. But I’ll bet if I gave you this soup and didn’t tell you what was in it (roasted eggplant), you’d slurp it to no satisfaction’s end. It’s smooth, creamy, cold and intensely flavorful. And sometimes, a little mystery only helps the effect.


This soup would actually be quite savory and delicious if served warm, but since eggplants are in season in late summer, and that time of the year tends to be HOT, it’s a wise move to go with the chilled version. And worth it to sacrifice some coolness in your home by roasting the eggplants. 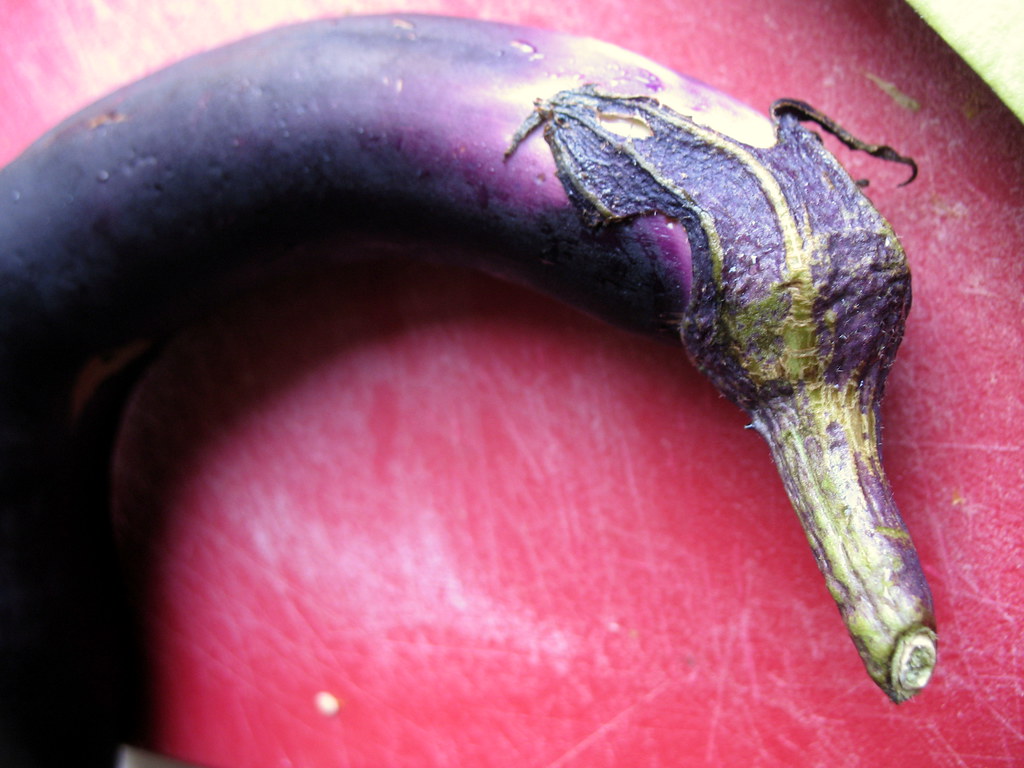 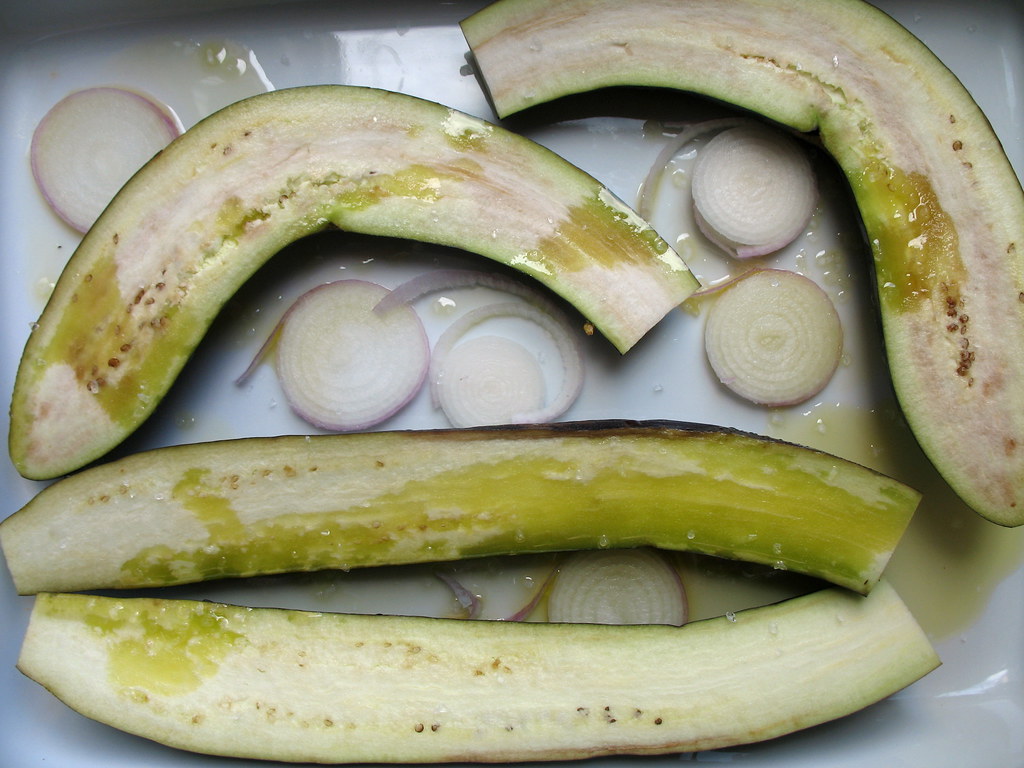 halved and ready to roast with shallots, olive oil and sea salt

The eggplant is a peculiar bird in the nighshade vegetable family; unlike tomatoes, another member, it needs to be cooked. I wouldn’t recommend skimping on this procedure either, lest you should detect the bothersome “itchy mouth syndrome.”

And this soup has tremendous zing from several fresh ingredients — lemon juice, raw grated garlic, yogurt and pureed tomato. It’s a bit of a salad, made baby food-friendly; a few cut-up cucumbers and tomatoes can’t hurt for texture-adding garnish on top. 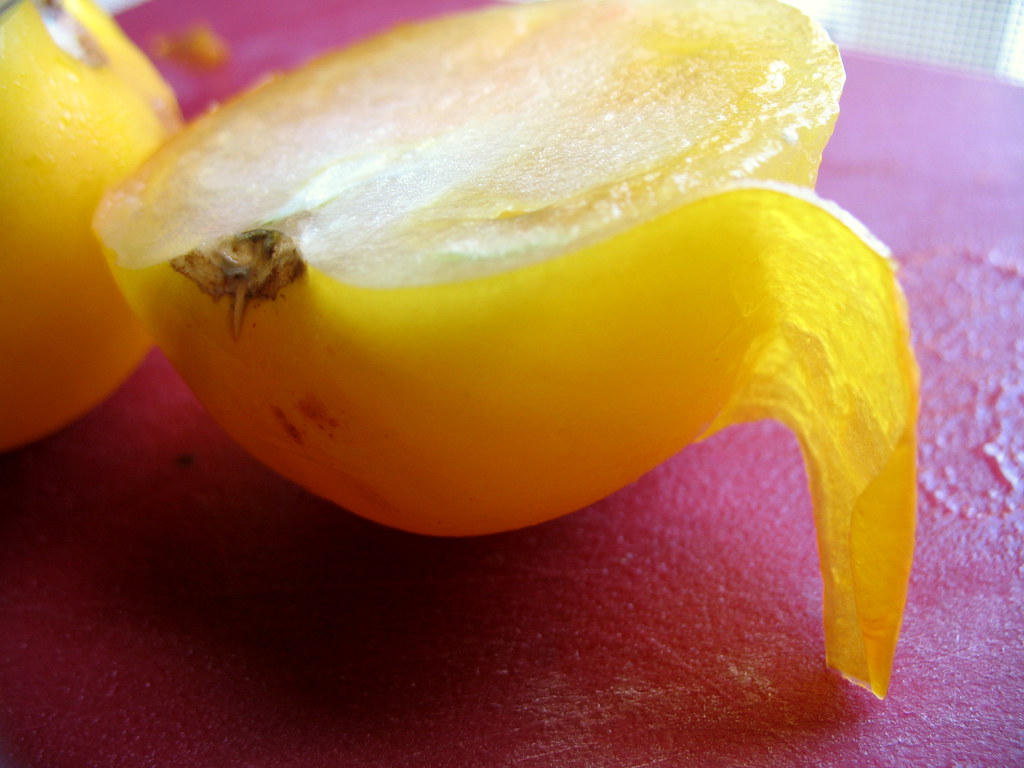 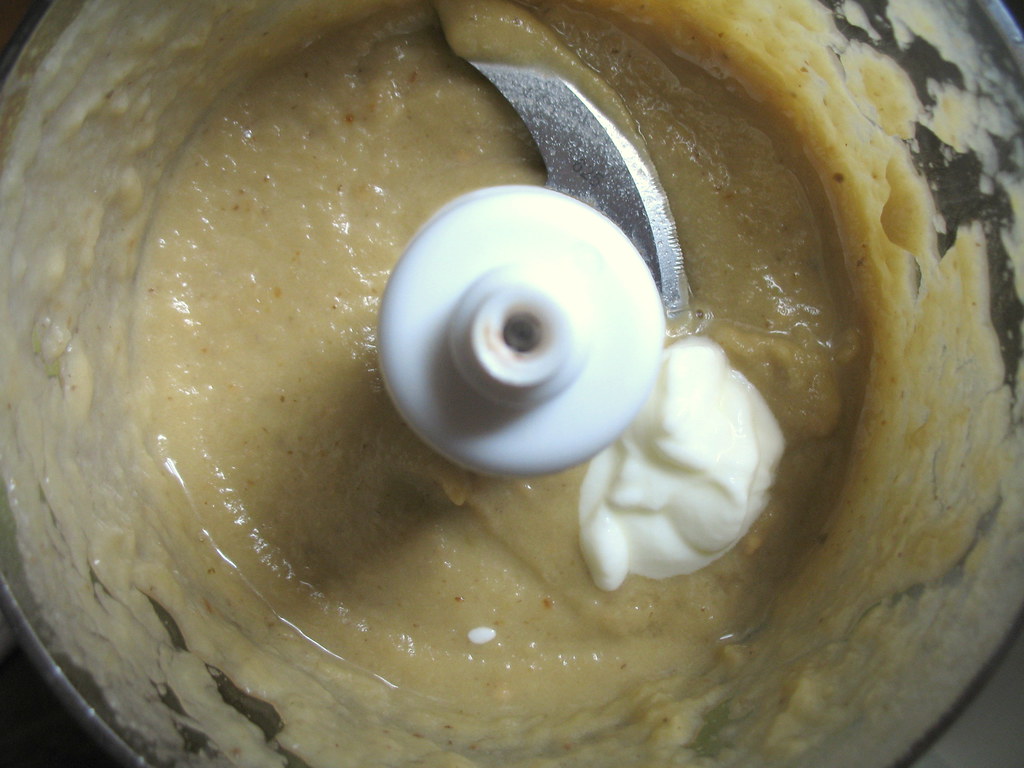 I am going to seriously miss this CSA food once the season is over. We’re about two-thirds of the way to The End, and even if picking it up every week has proved problematic, the fresh food surprises never fail to impress. For the past few weeks, members of the Crown Heights CSA (which gets its produce from Long Island’s Sang Lee Farms) have been blessed with Asian eggplant. These purple, sinewy fruits are in my estimation superior to the bloated egg-shaped norm. There is less seedy tissue to go around for its flesh’s worth, but most of all, I’ve never heard of having to salt and let your sliced-open eggplant sit (to draw out beady droplets of “bitter juices”) with Asian eggplants. So that step was gloriously skipped in this soup-making. 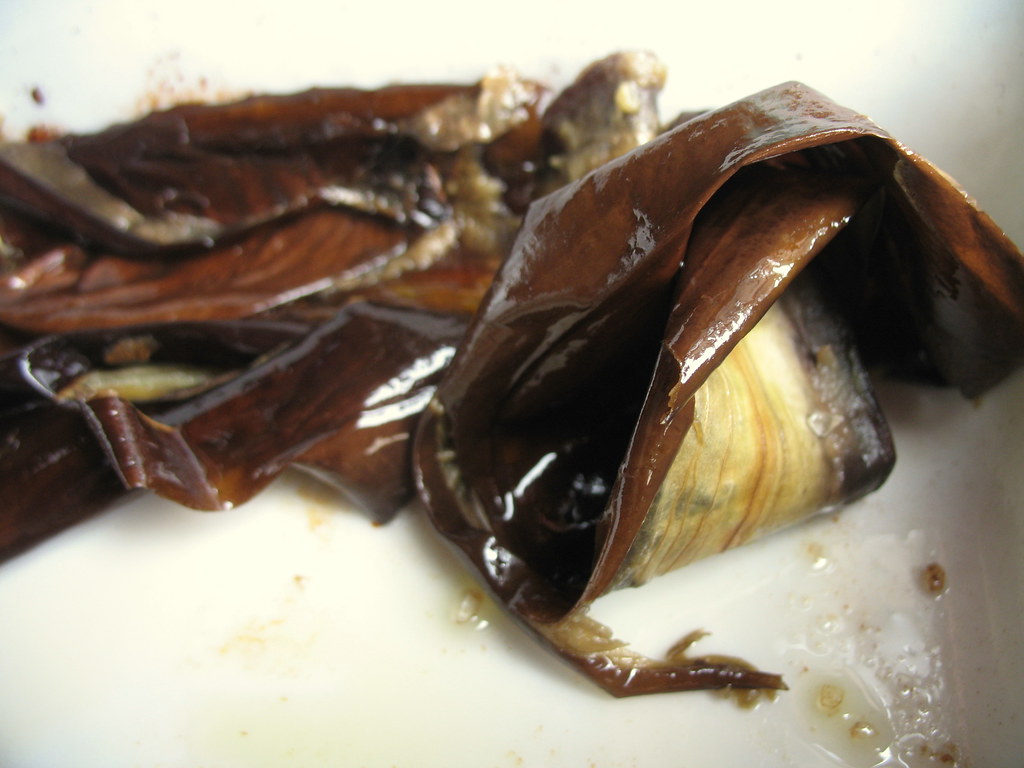 I’m not going to pretend that this is one of summer’s simplest appetizers to make. The soup involves roasting the eggplants, peeling and pureeing them in a food processor or blender — I don’t know of any other device that may do the trick (a sieve?). But if you’re hungry to experience eggplant in a different way than grilled slices in a sandwich this summer, this is the one to bookmark. You won’t have to use each and every one of the components in the recipe — the yogurt was an afterthought, having a fresh pint of my favorite (Ronnybrook Farm’s) plain flavor at my disposal. A juicy yellow tomato was in dire need of using up, so it was skinned with no skill necessary (thanks to its overripe state) and smothered in the processor along with everything else. The crisped shallots or red onion that added some depth to the soup’s flavor once ground in it are also delightful served atop the soup as a garnish, along with some fresh offerings. Crispy, savory and sweet, these perfect spirals are a crunchy topping that goes great with almost everything, like salads. 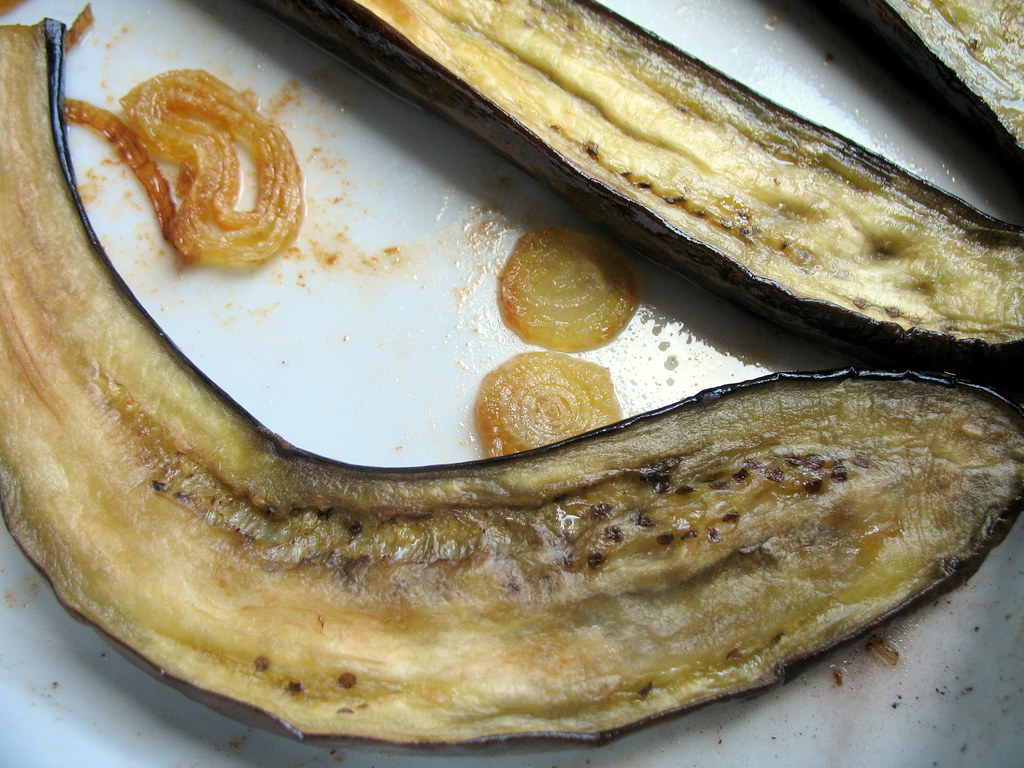 And what does the roast, mashed up eggplant mixed with all these ingredients ultimately taste like? This is eggplant soup, not yogurt, not fresh tomato nor garlic, and it doesn’t get lost in the crowd. Stubbornly, it keeps a subtle hold on its overall flavor, and some secrets are best kept until tasting.

Preheat oven to 400 degrees. Coat a baking sheet with olive oil and place the eggplant skin side-down on the bottom of the pan. Place the onions/shallots on the tray as well and brush the olive oil evenly on all the vegetables. Sprinkle with some sea salt. Roast for about 30 minutes, turning to flip over the onion slices once. Remove onions when starting to brown and crisp up. Keep cooking the eggplant until the tops have shrunken and are soft to the touch of a fork. Remove from oven and let cool completely.

Once cool enough to handle, scoop the flesh from the eggplant with a spoon and transfer to a food processor. Peel the overripe tomato using a sharp pairing knife to guide the skins off. Process the tomato, grated garlic, eggplant, lemon juice, and golden onions/shallots until well blended. Add the yogurt and season to taste with salt and pepper. Chill in a refrigerator until cold, at least 30 minutes. Serve with optional garnish.

Eggplant may be low in calories, making it a very popular diet food, but bad on me for peeling its skins off. Skins aren’t generally favored in silken soups, but they hold many of the vegetable’s antioxidants. That’s okay, they’re still high in potassium, fiber, and B-vitamins. This is a well-rounded soup, with some calcium from the yogurt, Vitamin C from tomato and lemon, and extra fresh veggies floating on top can’t hurt, either.

The reason this recipe was made was for its seasonality, which is no great feat this glorious time of year. You can make a soup out of just eggplant, tomatoes, bell peppers, corn, or whathaveyou from the overflowing farm stands; this one happens to incorporate just a few.