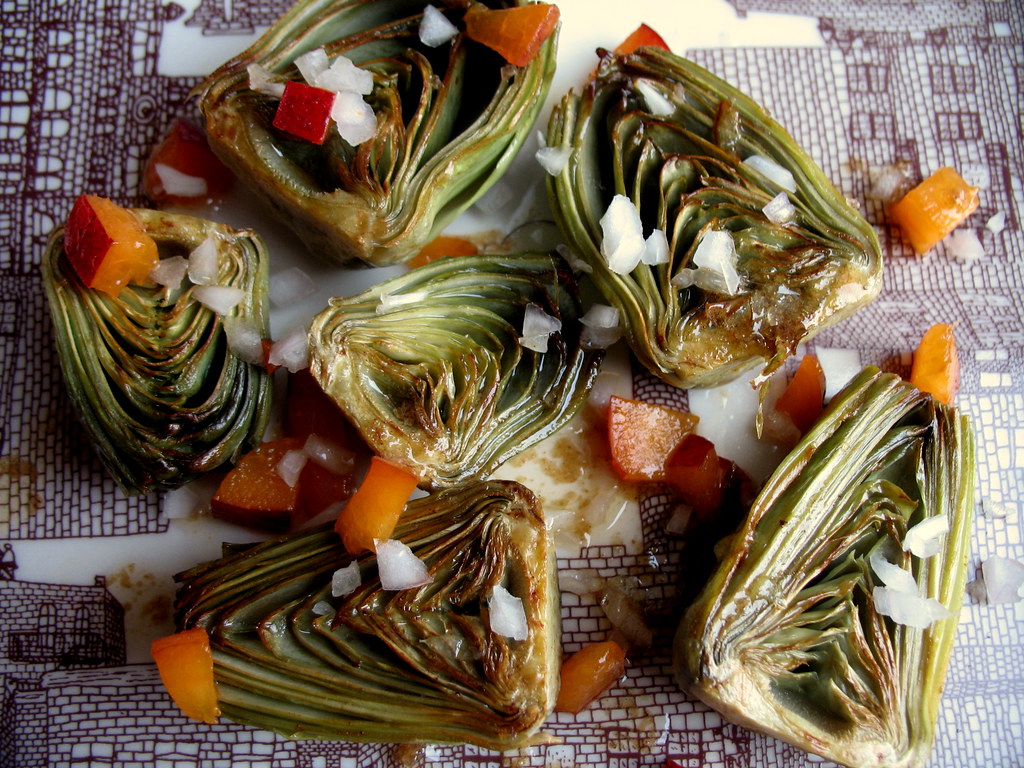 Serendipity only occurs every so often. But often, it occurs thanks to like-minded food-obsessed friends. With one, we nibbled on fried artichoke hearts over lunch while talking about how daunting most home cooks found cooking the florets, with their spiky petals that needed to be trimmed and trimmed, and her parents’ industrious habit of steaming them whole, leaving the legwork to the diners who would slather them in butter before eating. I resolved to find the perfect way to mediate this arduous task to readers. Then, upon meeting another friend for dinner that night, he promptly thrust me a bag filled with a recent Greenmarket find: artichokes. Unaware of my mission.


Clearly the stars were aligned, and something exceptional would have to happen with this fresh catch. How is it that I’ve never cooked artichokes in this blog’s recipes before? I’d steamed a whole artichoke before, but it was not pretty; the outer petals were bruised and off-smelling, it had sharp claws on its points, and once revealed, the yellow-green core hardly seemed fulfilling given the heaps of inedible clippings plus the work that went into it. 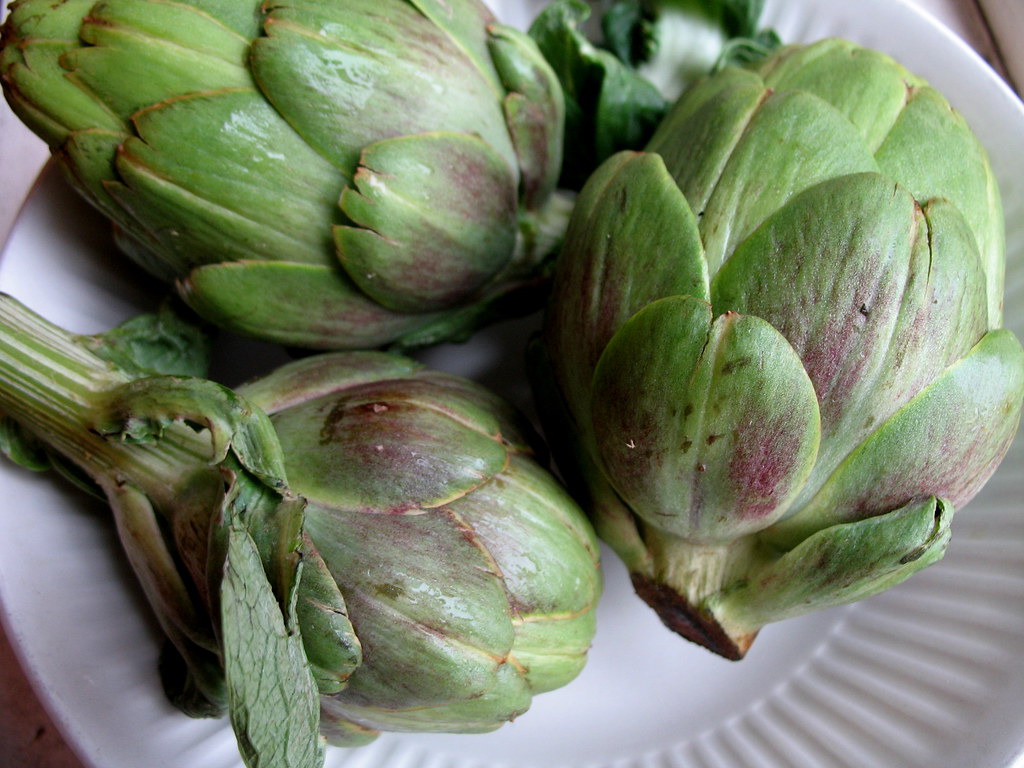 So when is a daunting kitchen task not so daunting, and when does an artichoke not require so much pruning as once thought? When you have fresh baby artichoke heads at hand. We’re not used to finding these younger species in grocery stores, but the becoming bulbs currently decorate farm stands this time of year. Click to zoom in on the brushstroke-like purple blush on the ones above.

And how do you steam and prepare the ‘choke? First, you must acknowledge its steely opposition toward this very cause. In “Ode to The Artichoke,” Pablo Neruda observes the vegetable’s “unshakable” leaf-crowns, as “dressed up like a warrior.” Next, take courage. In the poem, a heroine named Maria buys one at a market: “She is not afraid of it./She examines it, she observes it/Up against the light like it was an egg.” And after cooking it, the artichoke finally submits to defeat: “Scale by scale/We strip off/The delicacy/And eat/The peaceful mush/Of its green heart.” Triumph.

Many have been foiled by the artichoke’s natural defenses, however. There can be a thin line between when its layers are edible, and when its scratchy, fibrous husks will linger in your throat, clogging its airways impolitely all throughout dinner’s next courses. Which begs the question of, why eat it, when a plant so clearly tries its best to make you not? Well, my only answer to that is that the battle is well worth the fight — the steamed artichoke heart is uniquely delicious. It requires little to season it (not even salt nor pepper is an absolute must,) and its distinctive sourness is a trait that does well when kept long, such as when pickled, or served simply right away.

It could be boiled but steaming retains more flavor and vitamins in the slender heart that ultimately proves edible. Trim the outermost petals from each artichoke, and place them in a steaming rack above boiling water. Have them a good steam (depending on size, of about ten minutes), and peel more away afterward. As you do so, scrape the insides of the petals closest to the stem with your bottom incisors, eating any flesh that’s soft enough to break from its skeletal fibers. Once the petals begin to break at the midsection, indicating it’s tender enough to eat practically whole, set aside your discarded petals (for the compost bin) and give the entire floret a trim of its tip. 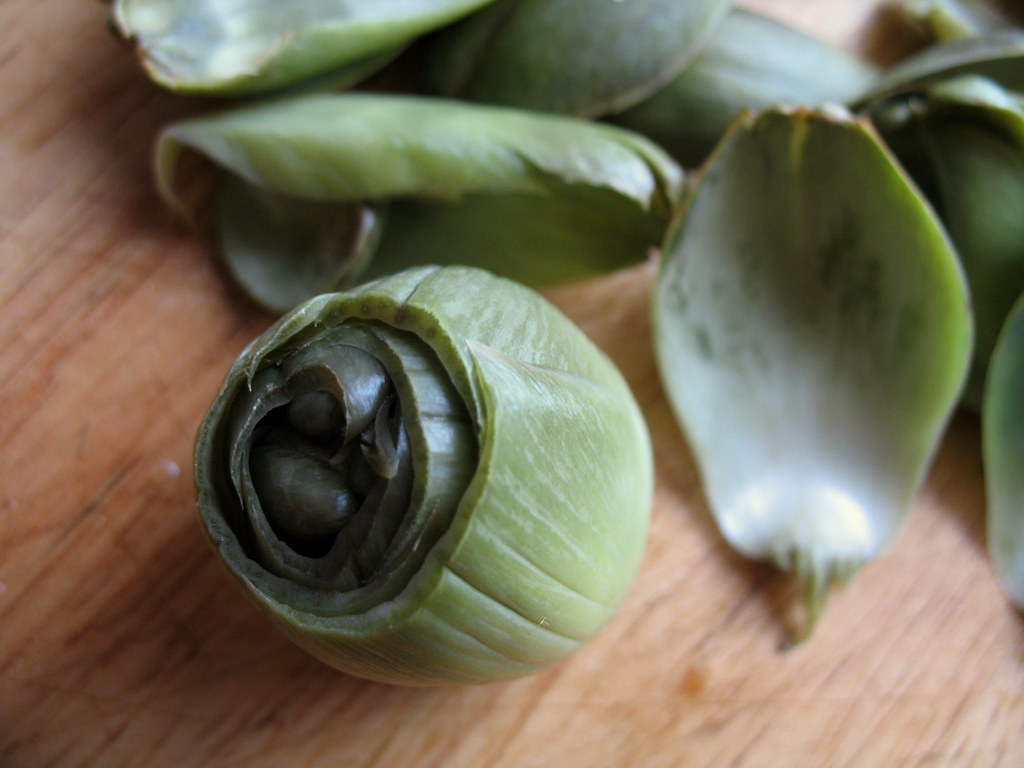 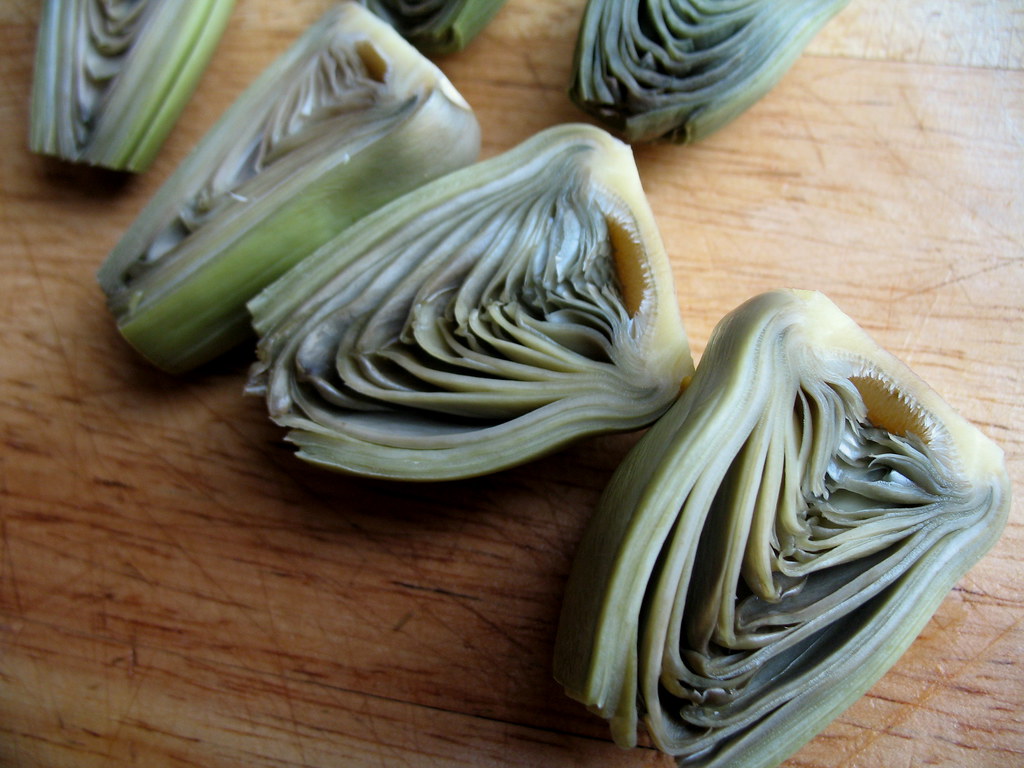 steamed artichokes are trimmed and halved

Now halve or quarter your wholly edible artichoke hearts. They can be thrown onto pizza, tossed into salads, or marinated and jarred for later use from here on. Or, you can brown their sliced-open sides in a hot pan with butter (instead of dipping the petals in butter, in folksy tradition), and serve it with some juicy, seasonal fruit like chopped nectarines, and a squeeze of lime juice to flavor the leftover butter from browning, as I did on a whim with these. 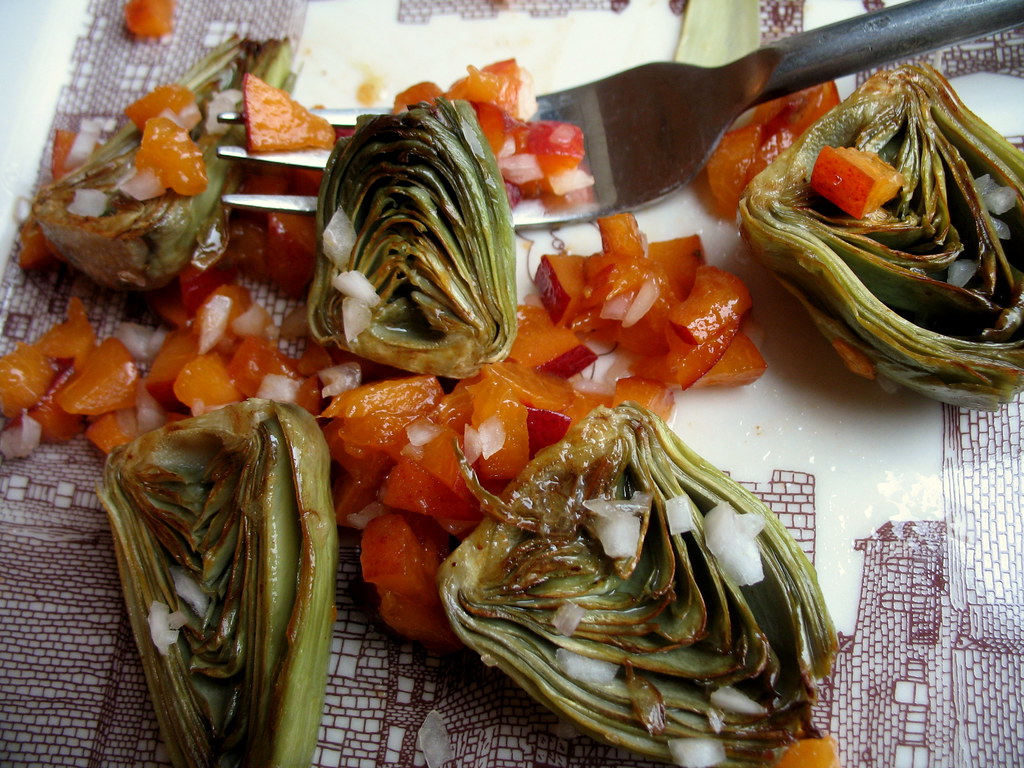 It’s far from the only option you’ll have, now that the artichoke has acquiesced to such unlikely levels of gentleness. Or maybe not so unlikely, these are baby artichokes anyhow. Get them while they’re still around. Next time, instead of cooking alone, I’ll have to invite a different friend or two to eat them with me, and further spread the good artichoke karma.

Wash and trim artichokes of excess (and browning) petals and stem. Place inside a steamer rack of a large pot with water (or alternately, improvise your own steamer with an elevated bowl inide a large pot with boiling water). Keep the water boiling and cover to steam for approximately 8 minutes. Let cool and once cool enough to handle, trim outer petals until tender enough to eat whole. Trim off the tips of each artichoke to about 1/2 inch. Cut hearts into halves down the center.

Add one tablespoon butter to the pan and melt over medium-high for about 1 minute. Add the artichokes, flat cut-side down, and a pinch of salt and pepper. Cook one one side until lightly carmelized, about 2 minutes. Flip and cook on other side for about another minute. Remove artichokes from pan and reserve. Add the next tablespoon of butter to the pan and once it’s melted, stir together with any burnt bits to scrape at the bottojm of the pan.

Four brownie points: Another reason folks must have thought to go through the trouble of peeling the artichoke: they’re incredibly nutritious, with antioxidants, fiber, Vitamin A, even some calcium and a very low calorie count. Coating it in butter doesn’t help the health toll here, but adding some fresh, chopped fruit and shallots add a burst of flavor and more vitamins.

Eight maple leaves: Except for the lime, everything in this recipe was gathered from various Greenmarket trips: artichokes, butter, shallot and nectarine. Yes, some of these purchases were my own.