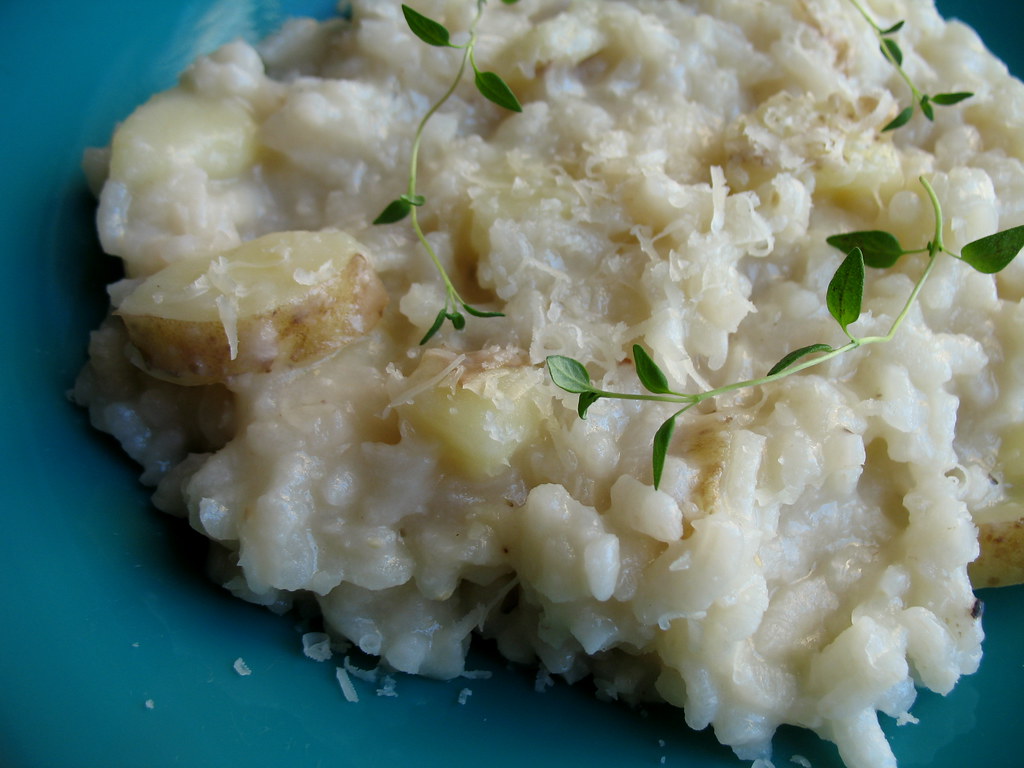 I am neither Irish nor Italian. But I can think of few things more satisfying alone than potatoes, and stock-simmered arborio rice. And together? Holy matrimony. “Satisfy” is not the word.


Coddle, seduce, excite, delight — I don’t know what is. But it’s heavenly. My game plan for potato risotto had started with a couple variations I’d wanted to try: a curry powder-sprinkled, lime-squeezed one with fresh peas, and a simple, white wine and chicken stock type with grated parmesan and a light sprinkle of herbs. The idea was to make the basic version first, and spice up the leftovers with curry and peas. This batch didn’t make it to leftovers, though. It was too good to put away.

There is a dish my mother made when I was very young that sticks with me, though she never makes it anymore. It’s stir-fried potatoes, julienned while raw, and cooked quickly in a pan with a splash of stock or just water. The starchy, soupy and soft matchsticks of potato are seasoned lightly with salt and white pepper, and fresh scallions to finish. She would serve it over rice, but lamented that it “made no sense,” because it was starch with starch. I asked her to make it many times, to her slightly amused discontent (for that starch-on-starch, carb-on-carb reason). Perhaps because it was so uncommon to have two differing starches in one dish, but more likely because it was just delicious, that I found it wildly addictive, despite it being so delicately flavored. It may make no sense. But potatoes and rice, bound in a light sauce, taste so good together, I learned early on. 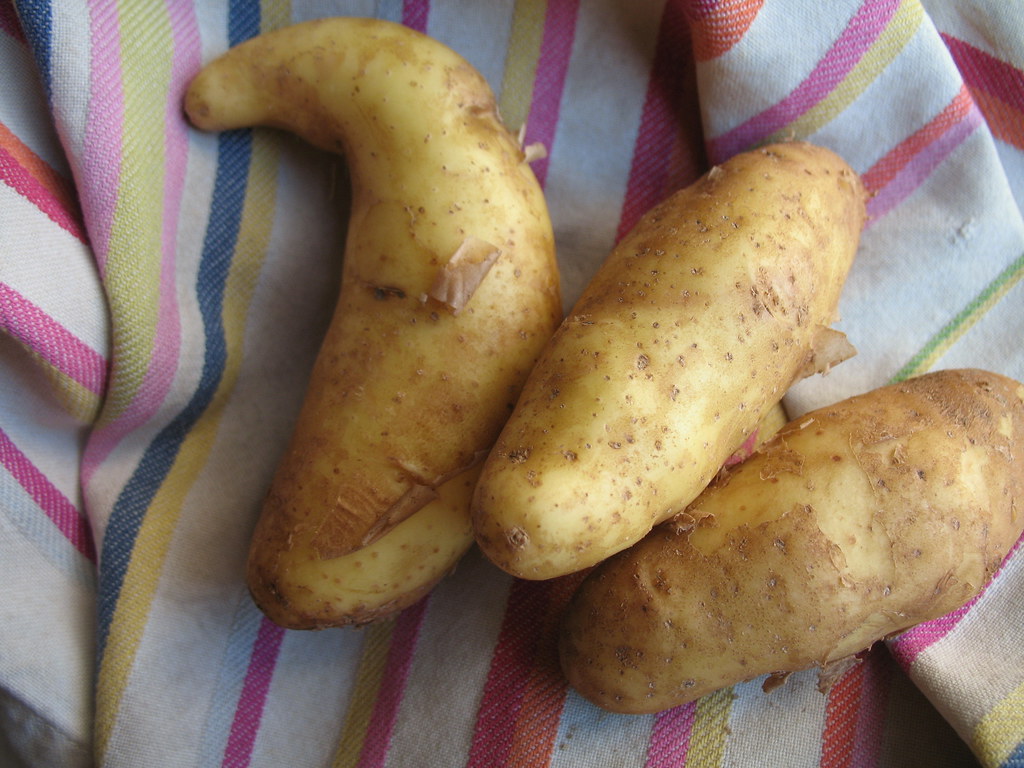 Thanks to everyone for adding thoughtful advice on CSA-managing in the last post. I broke one of my rules in it recently. My share of produce this week included a newcomer I couldn’t resist cooking right away, even though they’re one of the “hardier” vegetables that can keep longer than others: potatoes. Fingerling potatoes, to be exact, a name as irresistible as the tubers’ distinctive, slightly curled shape. 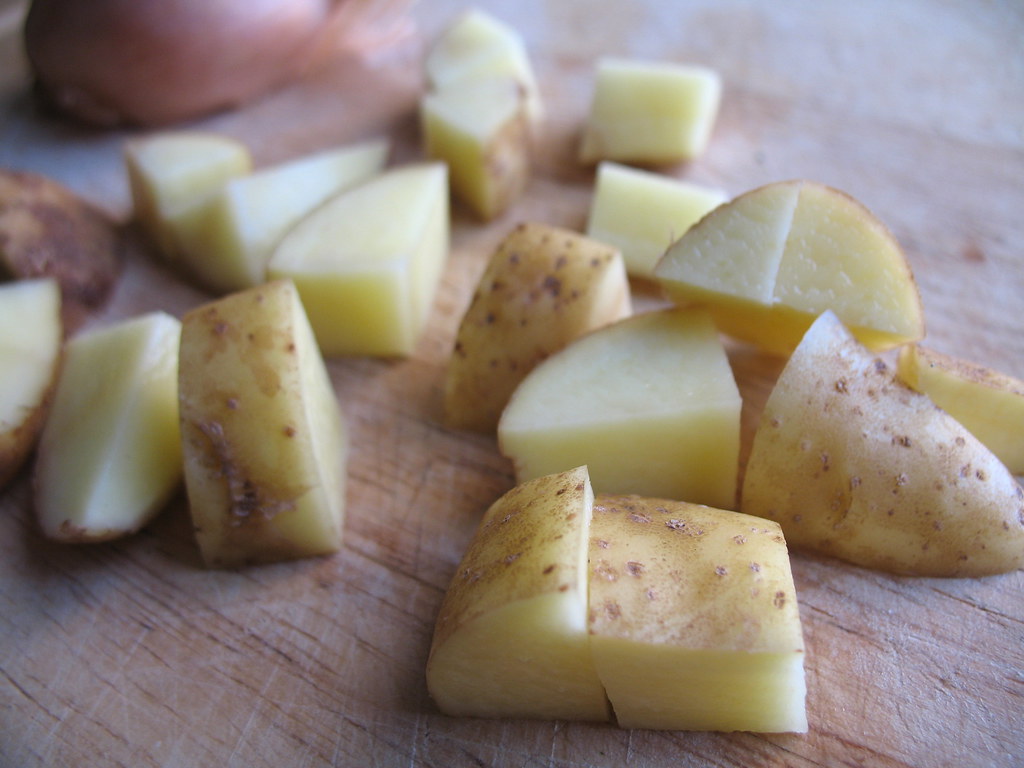 chopped with skins on

You don’t need to have these eye-catching (and much pricier) specimens to make a mean potato risotto — actually, you’ll lose the novelty of their shape once they’re cut up. Like the rice, the cubed pieces of potato will leach its starch into the cooking liquid as it’s stirred, helping to thicken it up. How starchy, waxy, moist or dry should the type of potatoes for this ideally be? I think these fingerlings were on the mealy side, sort of like small Idahos. But I don’t think a more waxy variety like red potatoes would be such a bad choice here, either. As long as they’re very fresh and firm — which these ones certainly were — the chunks will hold up over the duration of the thirty-minute or so stir, cooking to just the right tenderness. (Chop them bigger or smaller depending on what you have, or how firm you want them.)

This is a basic recipe for risotto, using mild shallots instead of onions and a shower of grana padana, similar to parmesan. Try it with any fresh herbs or additional flavors you’ve got. Try it tonight.

Heat the chicken stock in a covered pot on low.

In a separate, medium-sized pot, heat the olive oil. Add the shallots and sweat over medium-low heat for about 6 minutes, stirring occasionally. Reduce heat if onions begin to brown. Add the potatoes and rice and stir for another 1-2 minutes. Add the wine and cook, stirring occasionally, until it has absorbed. Add a ladleful of the chicken stock and stir occasionally until it has absorbed. Repeat until the stock is used up, or until rice is cooked through and the consistency is creamy. Add salt and pepper to taste. Stir in the butter and grana padana and remove from heat. Garnish with additional cheese and herbs and serve immediately.

Four brownie points: My mother is shaking her head again right now. True, this starch-only risotto is not a well-balanced meal in itself, though it might be tasty enough to treat it as such. But potatoes have a lot of potassium and other nutrients, including some Vitamin C, surprisingly enough. Start thinking about making a more nutritionally dense, mother-approved sweet potato risotto come the fall, when they’re in season.

Seven maple leaves: The potatoes were dug up from my CSA farm (Sang Lee) free of pesticides and relatively close to home, but other starchy player, arborio rice was imported (as was the cheese). A leftover chicken carcass that I actually took home from a friends’ dinner party when she offered it up provided for a big batch of stock in my freezer. I guess that was pretty resourceful, and waste-friendly.