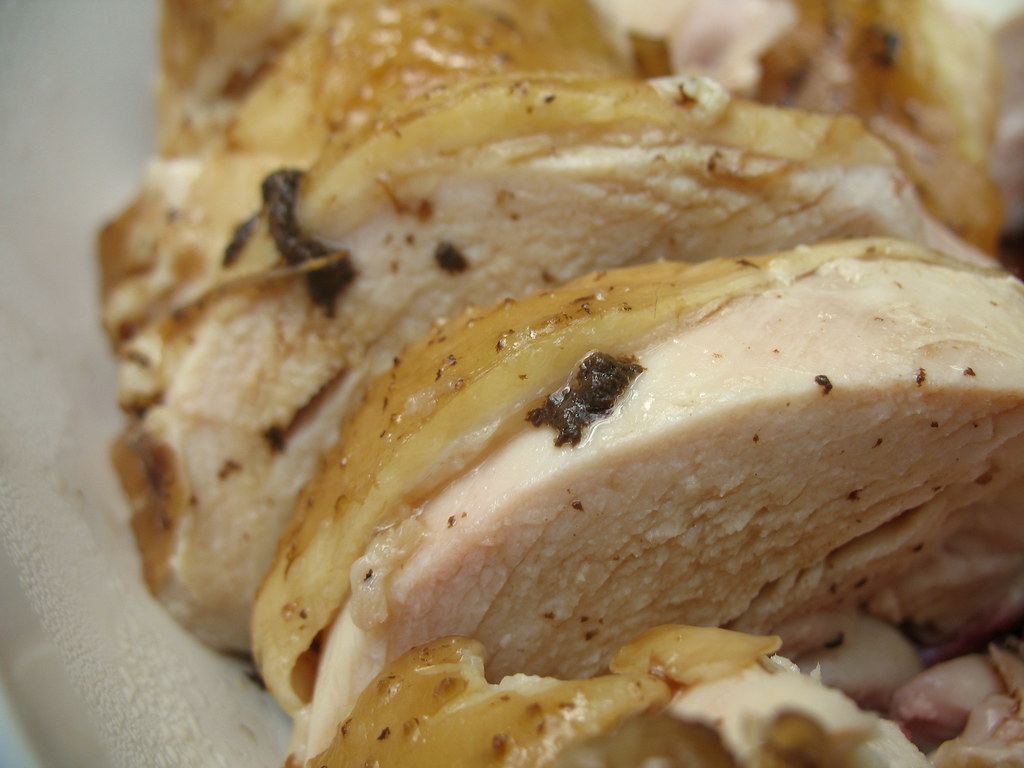 For the past few years, every Fourth of July has proven a raucous night of rooftop reveling not even close to climaxing with the nine o’clock fireworks spectacle. So this year, I hopped across the Hudson bright and early to “get away from it all” at my parents’ suburban backyard barbecue. Funny, I thought I’d be escaping the smog and fumes of the city. Instead, I found myself ensconced in a different type of smoke altogether, that of black tea leaves and dry rice grains crackling gently, inside a lidded iron pot that allowed its flavor to seep into a whole chicken. Ladies and gentlemen of the jury: I did not even need a smoker to make this dish.


Well, unless you call my dad and his pack-a-day habit (and helpful hand in the kitchen) that. But the most help actually came to me by way of a battered, circa-1960s cookbook of his, called Pei Mei’s Chinese Cooking Vol. 1. It appears to be out of print, and its author, Fu Pei Mei, passed away in 2004. Little do we know her nowadays, but she was the most recognizable Chinese cooking authority from the sixties to the nineties in Taiwan and much of the Western world. Unlike better-known cookbook authors who’ve spread the East to the West (Fuchsia Dunlop and Gloria Bley Miller, to name a couple) Pei Mei was Chinese and lived her entire life in China and Taiwan, hosting cooking TV shows, teaching classes and of course, writing cookbooks. The recipes in the book I used (my dad has a few of her others, as well) is written in both Mandarin and English on opposing pages. Browsing them all for inspiration, including the ones that were strictly in Mandarin (for glossy pictures), I came across a recipe for “Smoked Chicken Peiping Style.” 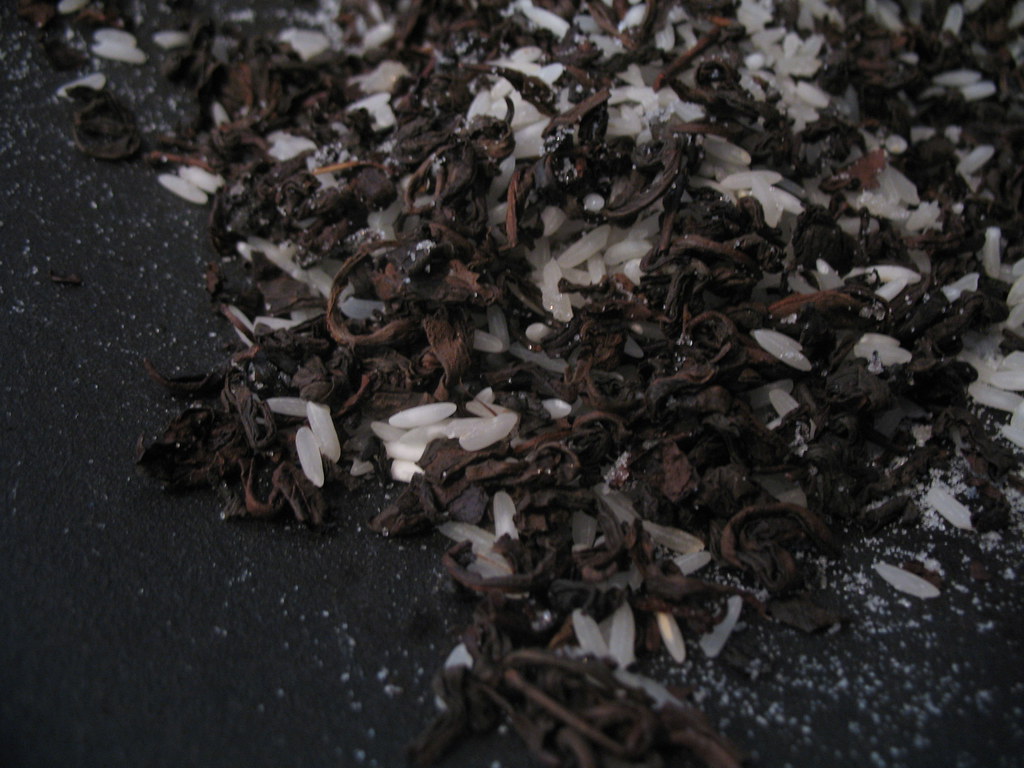 black tea, rice and sugar about to create smoke

Delicate in texture and smokiness, this chicken was a hit with my family. There’s nothing like a meaty hunk of cold, subtly flavored chicken in the summertime, so this chicken was served slightly chilled at dinnertime; take it out of the refrigerator for leftovers and don’t bother to heat it up. The “Peiping” of the recipe’s name is actually another way of translating “Beijing.” Beijing is not the only place you’ll find smoked poultry, though. There’s a similar delicacy made with duck popular in Hunan and Szechuan cuisines, which you should find on the menu for any of those types of restaurants. Smoked chicken, on the other hand, is more rare to come across, but still tasty (as well as generally more economical, and less fatty than duck). I followed it except for a couple things: I swapped in rice for the flour that tea leaves are combined with for the smoking effect (which I’d found in most in smoked duck recipes, and hence guessed that the flour Pei Mei called for was a flair of Western convention). I reduced the chicken braising liquid and poured it over the cooked and smoked pieces while they chilled — and I chilled it a bit before serving. I shrugged off a certain black pepper required at the beginning of the recipe, while rubbing it with salt, because I had no idea what she was talking about. 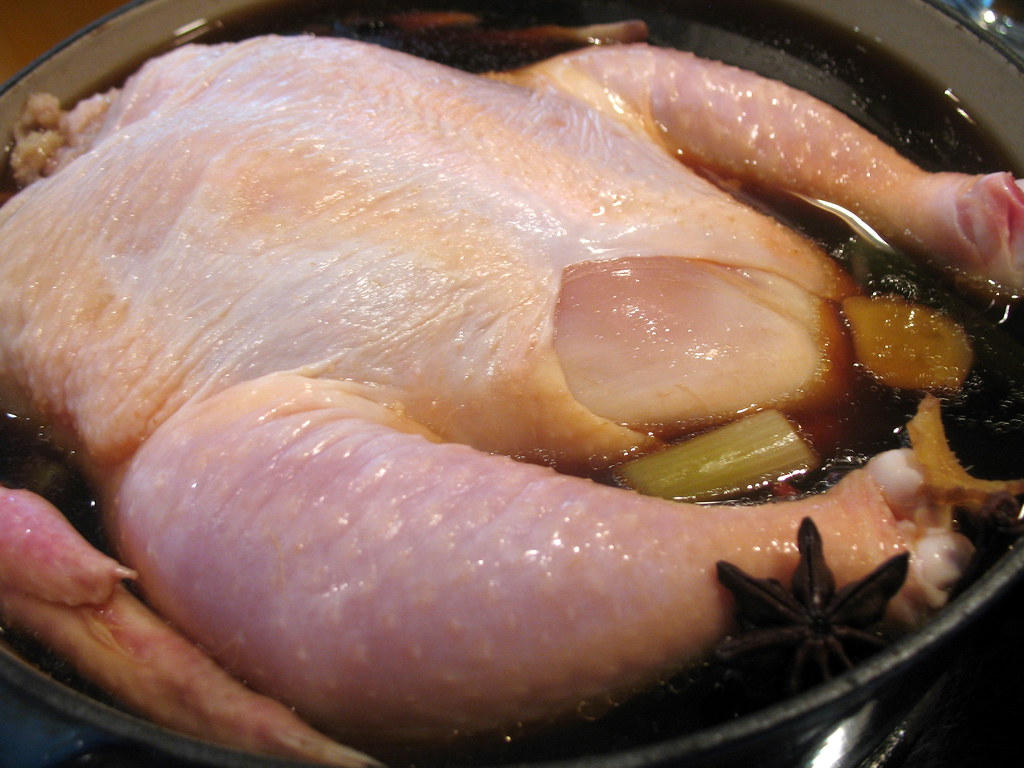 the chicken cooks in a soy sauce and spice-scattered bath 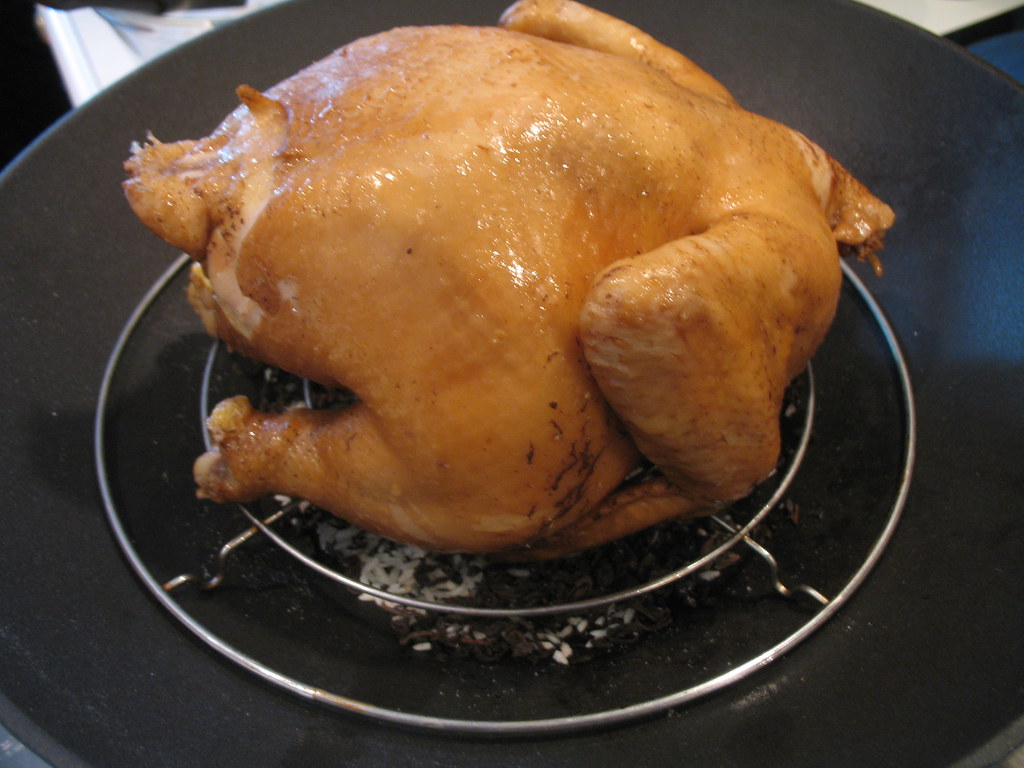 and afterward, sits atop a simple stovetop “smoker”


I took these liberties because Pei Mei didn’t invent any of these recipes, after all. She adapted well-known Chinese dishes into recipe format (something that’s not typically done, to a standard at least, in traditional Chinese culture). She also made them easy to replicate at home, the mission of all cookbooks. This smoked chicken recipe, daunting as it may sound, is no exception. You start by boiling the chicken until just cooked in a broth of soy sauce, green onions and Chinese spices like five-star anise. In another large, covered pot or skillet, scatter a handful of black tea leaves, uncooked rice grains and sugar over the bottom and let them scorch as the chicken, drained but still whole, sits elevated on top. Keep the improvised “smoker” covered like this a short while, and the tea and smoke will have imparted its flavor throughout the chicken.

Then the really fun part: chopping it up with a cleaver. Having watched Chinese butchers do this deed with roast ducks and chickens hanging by the windows of their shops throughout my life — the most recent time, getting splatters of duck juice on my face as I stood too close — I gleaned what I could and with a steady grip on the knife, bore down on my target (a bony midsection of leg, say), with a deft swipe. It worked. And it’s a great way to release stress.

There are a couple things you do want to be picky about if making this dish. You’ll want to use whole black tea leaves, the loose, dried shriveled knots you have to put in tea bags or a teaball to steep water with, instead of the finely shredded pre-teabagged type. I wouldn’t recommend trying it with green tea leaves either, as it seems too subtle in flavor, and this chicken has a subtle tea flavor to begin with. As far as black tea leaf types go, I’d say try almost anything. I’m fairly certain the kind I used was a common Yunnan variety. Get a fresh can, not something ancient in the pantry, for the most effect. 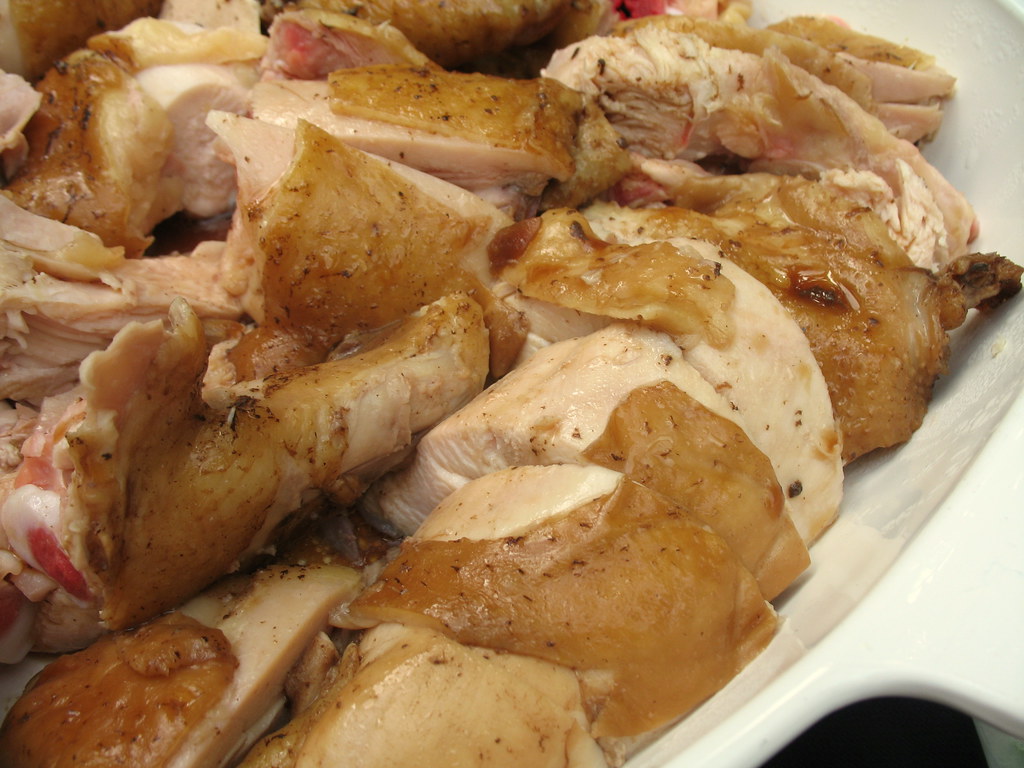 Now I’m going to eat my words (and I did, literally). I did use something ancient in the pantry for my tea leaves, and I experienced severe chills down my spine when I was confronted with a factory-farmed, conventional chicken to cook on the Fourth. Not my ideal. I’m not going to get into the specifics that led me to little options than this, and I don’t want to preach or chastise on the dichotomy between humane/local/sustainable agriculture versus not, any more than my poor family (and dear readers) are subjected to, least of all when I’m not exemplifying said preferences. It’s a fact of sustainable foodie life that most of us cannot practice it 24/7. And, that we have to remain respectful of people who are not as strongly opinionated, which is why I loved this Huffington Post piece on the “Environmentalist Etiquette.” In any case, when life threw me this lemon (a conventional chicken), I turned my attention on making lemonade (the most interesting usage I could think of for it then, smoking it with tea leaves Chinese-style, in a humble ode to the late heroine of Chinese cookery, Ms. Pei Mei, for a peaceful and otherwise perfect Fourth of July party with close family).

Rinse and pat chicken dry. Rub with salt throughout its surface and inside the cavity and refrigerate for 4 hours (or overnight). In a large saucepan (big enough to hold the chicken fully immersed), bring the water, soy sauce, star anise, cinnamon, peppercorns, scallion and ginger to a boil. Let simmer for 10 minutes. Add the chicken and cook another 15 minutes, turning once.

Remove and let cool for a few minutes. In a large, heavy-bottomed pot with a lid (a Dutch oven will do), spread the tea, rice and sugar on the bottom. Heat over medium-high flame until the tea mixture becomes fragrant. Reduce heat to low, and and place a roasting rack that fits inside it on top, so that the surface is just elevated from the tea mixture. Place the chicken breast side-up on top, and cover with the lid. Cook over low heat for 20 minutes.

Meanwhile, remove about 3/4 of the cooking liquid from the chicken and reserve the stock for another use. Bring the remaining 1/4 to a boil and reduce, simmering over medium-low heat, to about half its volume.

When chicken is cooked and cool enough to handle, butcher into small pieces starting with splitting it across the center lengthwise. Cut off the wings and legs and chop into roughly 2-inch pieces. Chop the breast width-wise into similar-size strips. Arrange the chicken pieces into a serving dish and pour the reduce (and slightly cooled) reduced stock on top. Cover and chill for 1 hour or more before serving.

Five brownie points: This is only one part of a full meal, the protein. But it’s also one of the cleanest, easiest and most healthful ways to prepare a whole chicken. Unlike roasting it, where cooks and cookbooks recommend heavily greasing the bird beforehand with butter, this technique adds zero fat to the skin and blubber already in the meat. That said, it’s also highly recommended that you eat the skin, because it lends such a great richness and flavor to the overall bite.

Two maple leaves: This dish is just chicken, with some ingredients used to season it. As admitted, the one I used was none too local nor humanely raised, but the two brownie points are intact for actually purchasing it whole; most of the chicken meat sold in the US are oversized breasts, boneless and skinless. The way I see it, this lends to a disconnection between the consumer and the animal he or she is consuming, and the cut preference responsible for the practice of plumping up the breasts of the chickens to the point that many are too off-balance to walk just before being slaughtered.