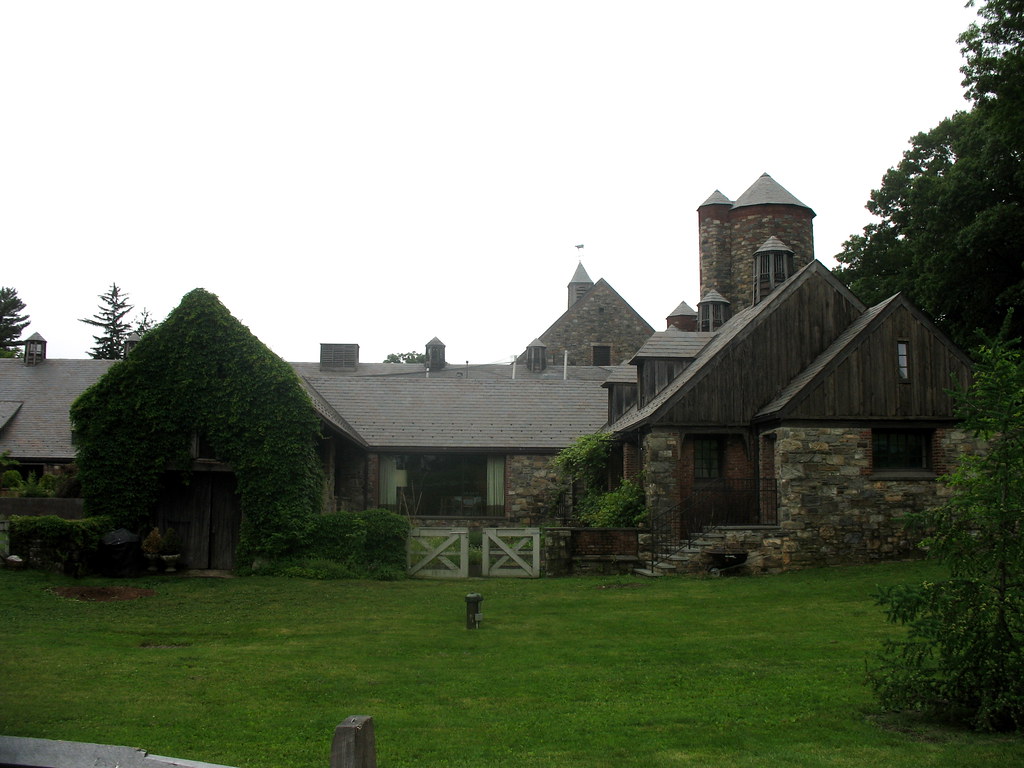 If April showers bring May flowers, then June showers bring July… peppers! Zucchini! Tomatoes, purple string beans and strawberries! And okay, more flowers, too. And that’s just the beginning of what’s in store as summer harvest time approaches at Stone Barns Center For Food and Agriculture.

I recently heard a local farmer recommend to anyone wanting to volunteer at a farm, “Don’t go in July and August,” – when it’s all nice out and everything’s coming out of the soil like crazy. Go from April to June or so – essentially, now. I can’t say this is exactly why I went to Stone Barns to roll up my sleeves and help plant this week, though. The reason I went was fairly simple: it’s Stone Barns, and I’d never been there before.


A working farm and educational center, Stone Barns is perhaps the most lauded archetype for sustainable agriculture in the Northeast, and popular destination for eco-conscious foodies. Its tightly woven ecosystem includes cattle, sheep, pigs, chickens, geese, turkeys and fields and greenhouses of produce across its 80 beautiful acres. It is the heart of Blue Hill, the Michelin-starred restaurant led by executive chef Dan Barber, which has a sister location in Manhattan. And it’s only 30 minutes from Midtown by train, located in Pocantico Hills, New York.

My cab driver looked confused when he drove up to the locked gate in front of a long driveway surrounded by sprawling pasture. “Closed Mondays and Tuesdays,” a sign read. It was Tuesday. “You work here?” he asked. “Uh, yeah,” I said, paying him $10 for the quick ride from the Tarrytown Metro-North station to the agriculture center. At least, for the day. And what a day I’d picked: the thunder and lightning that had woken me up through the night had lightened up to a steady downpour all morning. It was a good thing I was working in the greenhouse.

When I arrived at the greenhouse I found my friend Katarina crouched over a row of baby spinach. It was her first time volunteering at Stone Barns, too. I also met Olivia, the Four-Season Farm Apprentice who’d OK’d our volunteer visit. Since she’d taken up the post in January, Olivia seemed to have an intimate knowledge of every seedling inside the place. After a cheerful introduction, I was put to work on harvesting the spinach and lettuces, too. 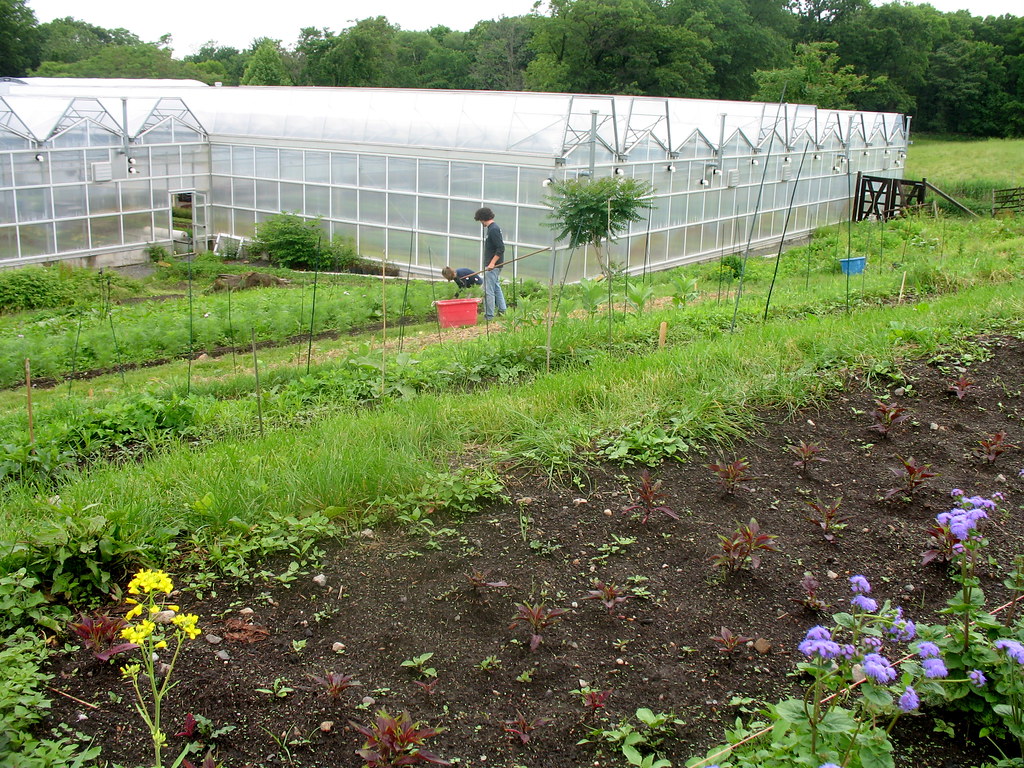 a hillside view of some of the greenhouses 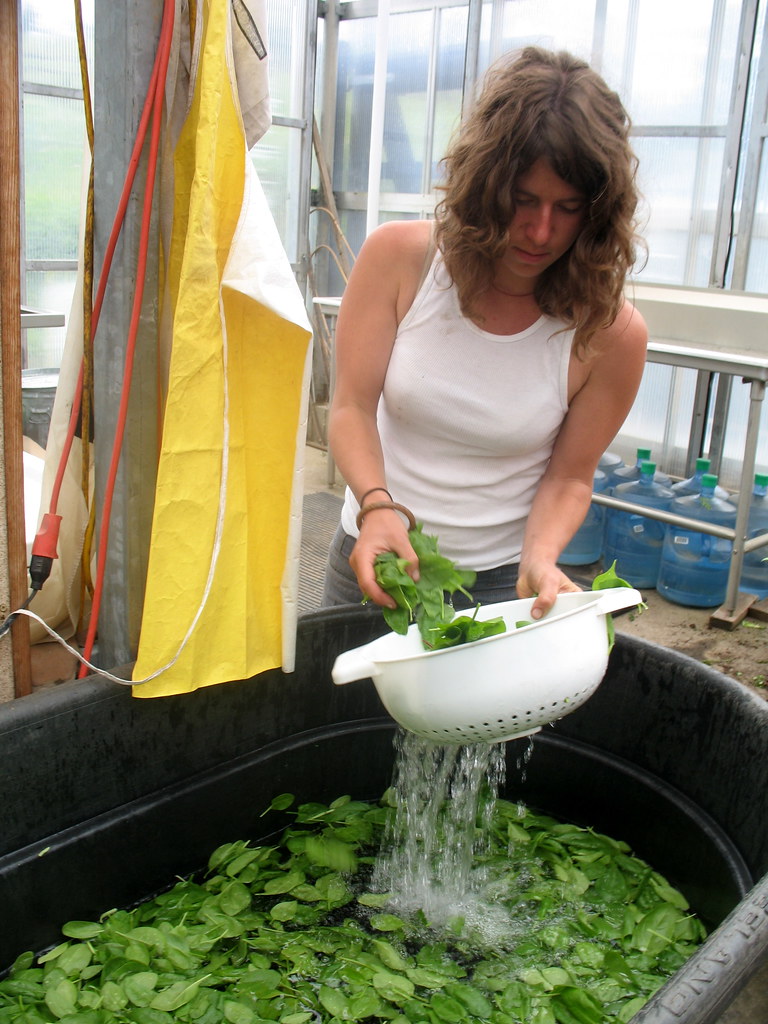 Stone Barns’ main greenhouse is an enclosed half-acre of in-ground crops that grow with very little if any extra heating, even in the winter. There are several smaller, tent-like greenhouses to its side. As with all the crops on the farm, they are grown without chemical fertilizers, pesticides or herbicides. A large white tank just outside the greenhouse labeled “Compost Tea” helps to fertilize the soil. The “tea” is made up of only the debris and manure from the farm itself (and sometimes compost scraps from the staffs’ homes, according to Olivia), which are combined with water and aerated inside the tank for a period of time by a device somewhat like a fishtank bubbler before it’s ready to use. (Unlike regular tea, it does not need hot water to “brew.”) All the crops produced here, like the meat and eggs from the farm’s livestock, are sold at Stone Barns’ farm stand or used in the kitchens of Blue Hill.

Snapping leaf after leaf off its delicate stem with a serrated knife and plopping them into a basket, I was reminded of the chapter in The Omnivore’s Dilemma where Michael Pollan goes to Earthbound Farm and observes the migrant workers doing this backbreaking task all day under the hot California sun. We were spared the sun’s rays being inside the greenhouse (not that there was any outside, either), but crouching constantly is definitely not for the old or un-fit, I learned after just a few minutes of it. Olivia conceded this point, too — even with a bucket to sit on, this work was strenuous. (Katarina says she’s still sore from all that crouching, whereas I’d opted to sort of kneel out in the dirt and got really muddy, but ache-free.) But despite this discomfort, we had a good time chatting through the work amongst ourselves, and with an intern who joined in, who had just graduated college and was starting a summer at Stone Barns.

Leaving only the tiniest baby greens to grow, we moved onto transplanting a few rows of lettuces. Olivia showed us which seedlings to plant where — different varieties of mesclun greens that would benefit from intercropping. They each had interesting names like Regina and Oscart, names that for the most part never make their way to the market. These seeds were sown in small beds covered with netting to keep bugs out until the sprouts were strong enough to go in the ground. Not all of them make it, and placing the clumps of soil with their delicate roots into the holes we’d dug, I feared that some of these might not thrive, either. Olivia and Katarina assured me that most would. But after planting two rows of them (hopefully not too clumsily), I felt a certain attachment to these plants. How are they doing now? Will they survive? I guess I’ll have to come back sometime soon and see. 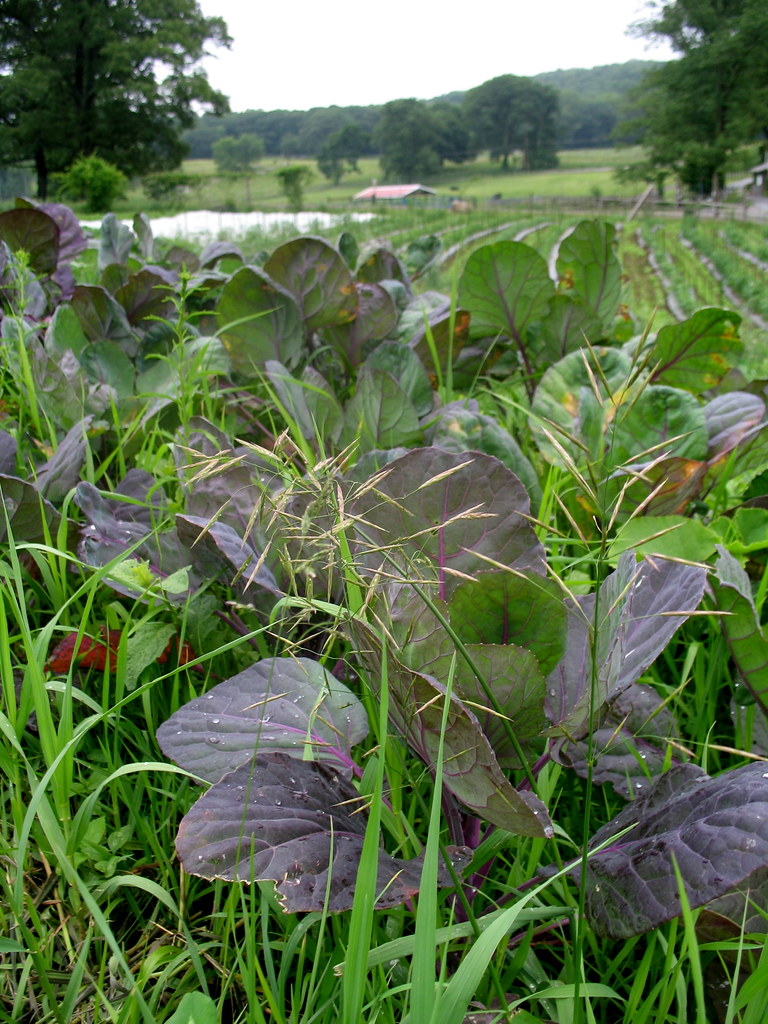 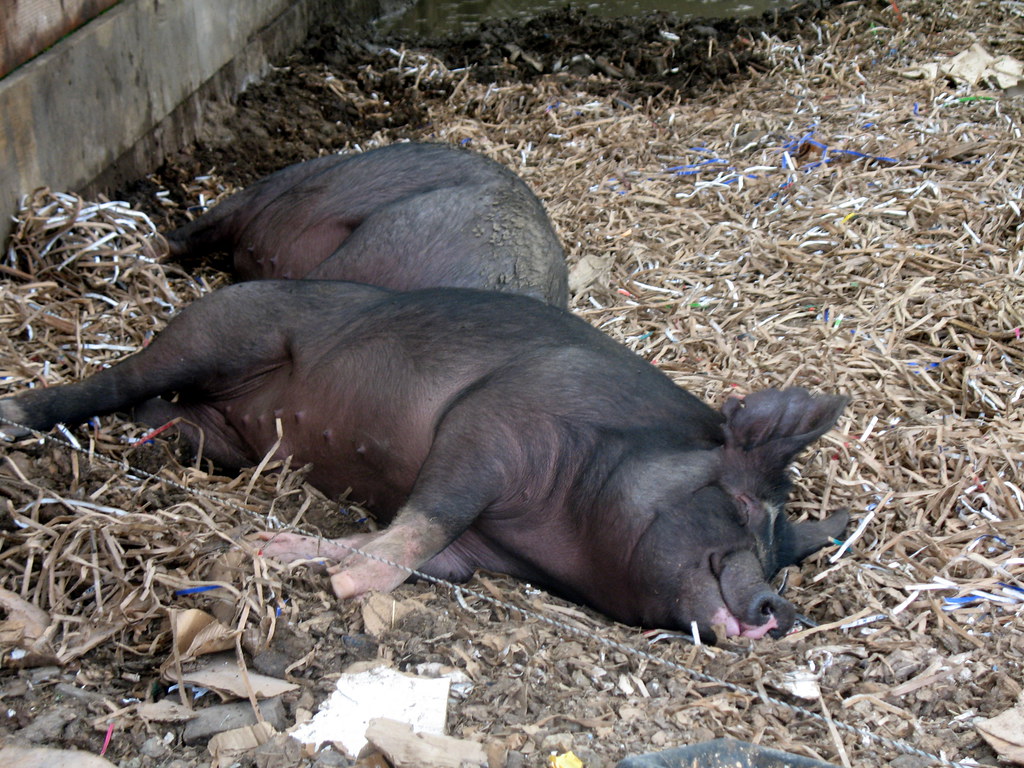 a contented pig takes a nap 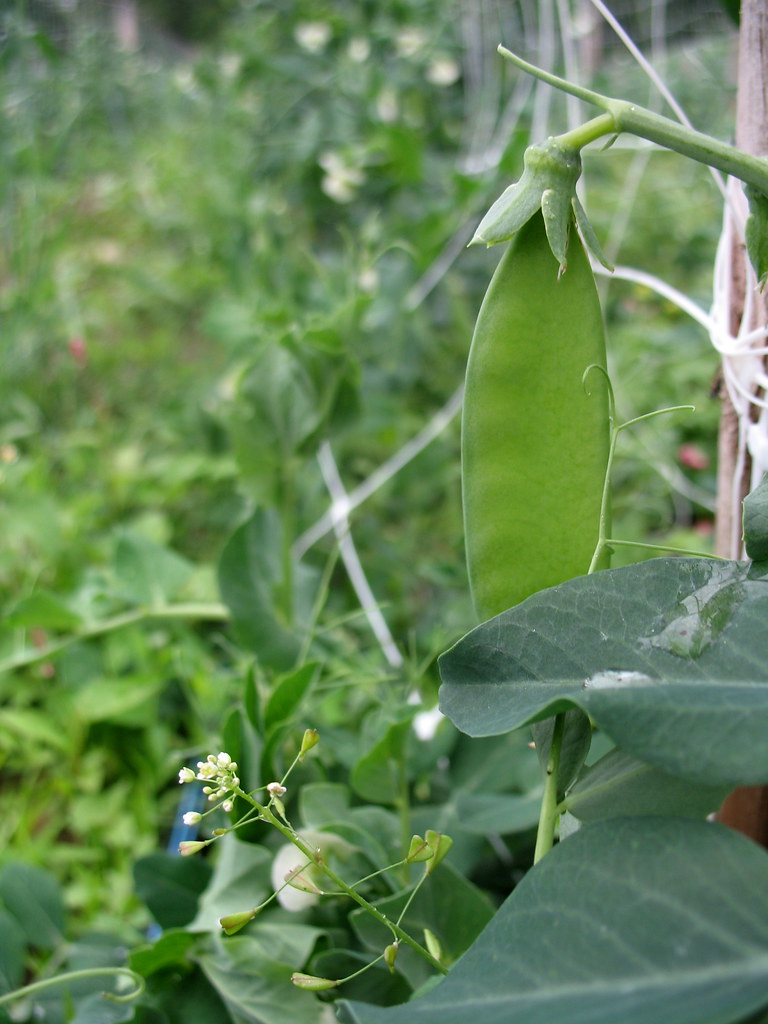 Taking a break, we walked around the farm for a while, peeking into the chicken coops and livestock pens. We were treated to a walk-through of some of the field gardening operations by Zach, the apprentice field manager. The pastures at Stone Barns are hilly, which makes it a little more difficult to plow and to evenly irrigate. But with a little innovation, trial and error, it produces vast amounts of diverse crops. We also took in the rustic quaintness of the courtyard and surrounding buildings. Really stone barns, the circa-1890 complex had originally been a dairy farm owned by the Rockefeller family. After decades of disuse, Peggy Rockefeller began a cattle breeding operation on the land in the 1970s. Her husband, David Rockefeller, eventually restored the estate and established it as an agriculture center in 2004, in her memory. 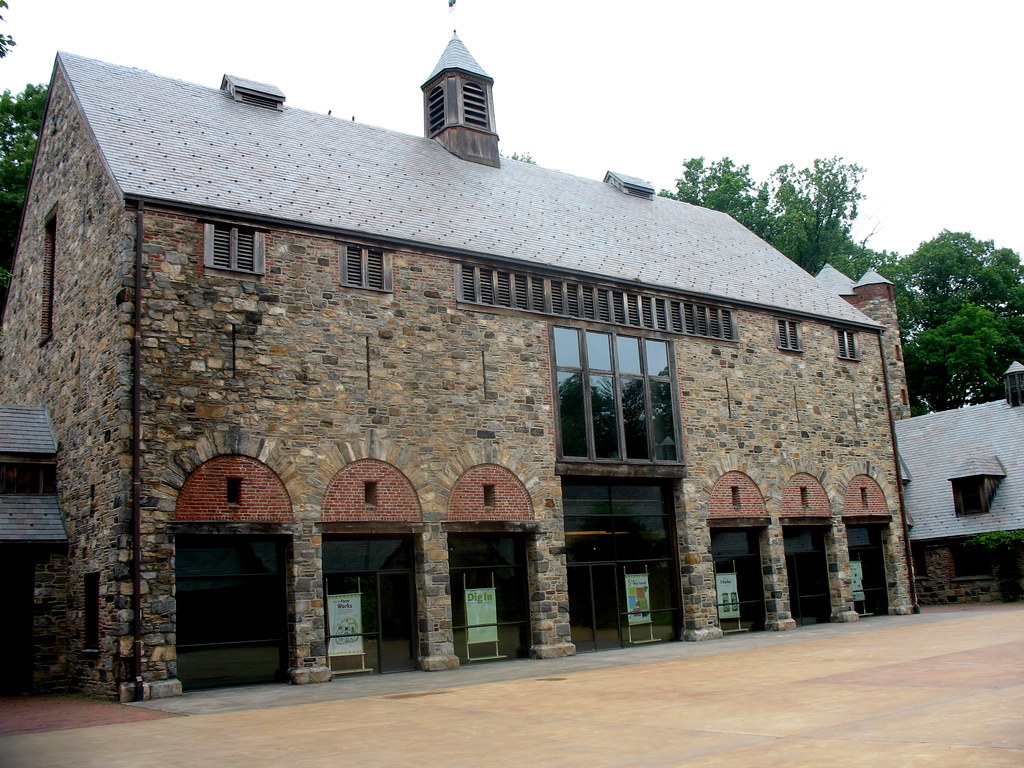 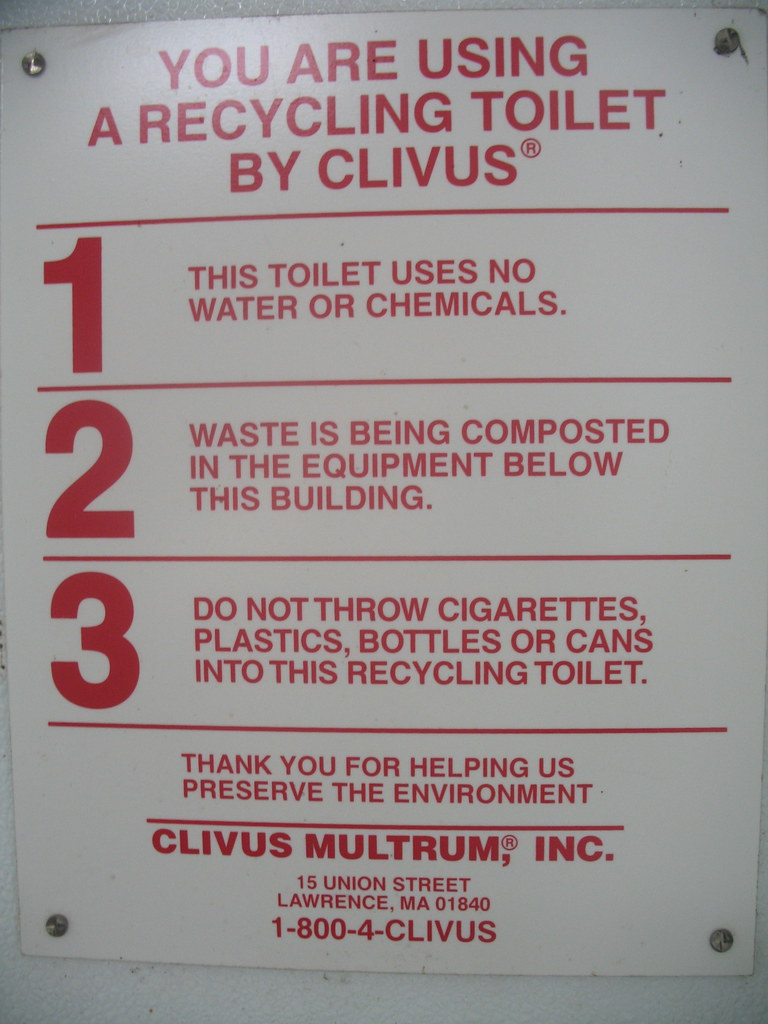 instructions inside the farm’s earth-friendly outhouse

Stepping into a barn, we saw a ceiling strewn with what looked like dried cornhusks and smelled like hay. There we met Jack Algiere, the Four-Season Grower in charge of the greenhouse and garden operations, who was generous enough to step away from his paperwork to chat. He explained the dried things were a particular variety of black soybeans he was drying out to collect the seeds. Plucking one of the round, matte black pebbles, he told us that he’d gotten the seeds from a friend who had cultivated them for more than thirty years; since then, he’s taken them from state to state in which he’s lived, and says he’s still learning about breeding for soy. The agrarian art of seed saving has been in great decline in recent years (as discussed in detail in a later chapter of Food, Inc., which opens today). Essentially, seeds have been patented, and most commercial farmers forced to use only certain patented (and often genetically-modified) seeds instead of saving their own. What Jack’s friend had been doing with these soybeans, and what Jack was taking up the ropes on, was what farmers had been doing for ages in order to breed the best product for their particular plot of land: selecting and planting seeds over several harvests, so that they gradually change. These black soybeans were very rare, according to Jack; he hasn’t seen or heard of them being grown by more than a few farms including his friend’s. He also found them to be a very practical plant, higher in rhizobia than most legumes, which fixes nitrogen in the soil beneficial to growing other plants.

They say you learn something new every day, but I couldn’t count all the things I soaked in during my day at Stone Barns with two hands. With summer near, the center’s farm stand will not only be overflowing with produce, but its workshops and activities much more numerous. I look forward to coming back another (non-rainy) day to help out in the fields — or to try the restaurant for the first time (read: I would not turn down a date to Blue Hill). The day Katarina and I volunteered happened to fall on Stone Barns’ five-year anniversary. The staff was looking forward to celebrating it that evening with beer and Mexican food. But a siesta the next day? Probably not. They are so committed, these kind and knowledgable staff.