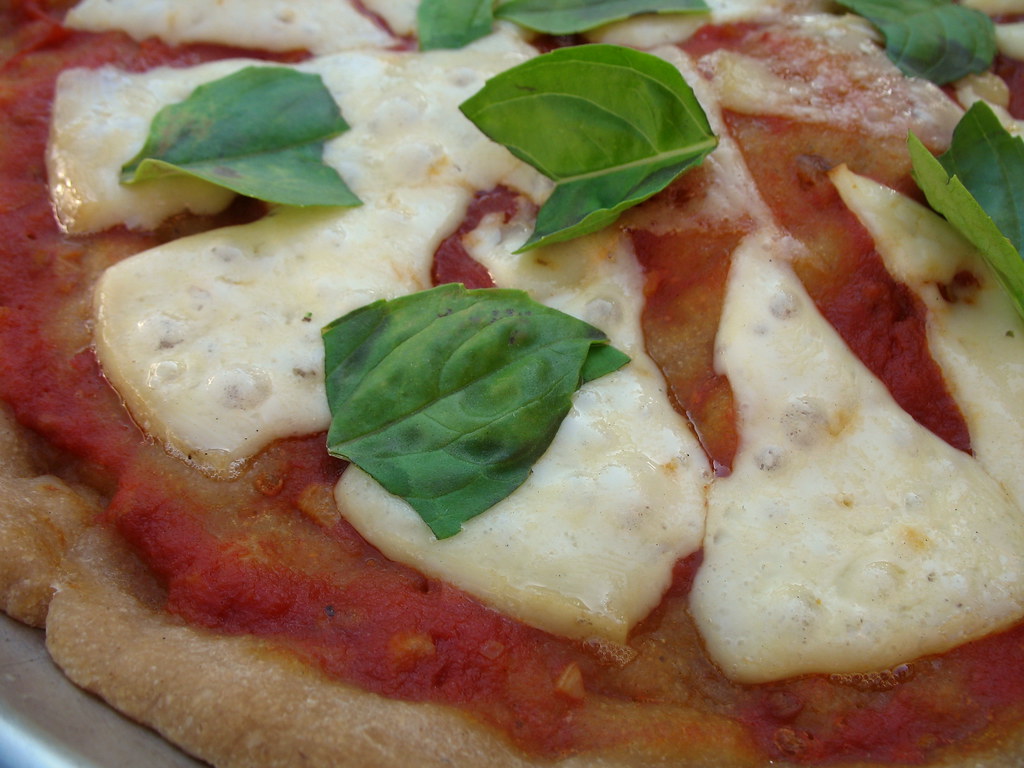 ‘Tis the season to grill, as they say. And Memorial Day is no exception, especially when it’s as hot and sunny as the one we just had. It seems the weather gurus have had it wrong so much lately — not a drop of rain was in sight. So instead of satisfying my latest craving with an oven, some friends and I fired up the charcoal for an impromptu barbecue… pizza.


Not barbecue in the sense that it had barbecue sauce. Nor did it have barbecue meats of any type. This pizza was simply the first vehicle I could think of for a very particular wedge of cheese I was smitten by at the Greenmarket Friday afternoon: Pecorino Fresco, made from raw sheep’s milk by Dancing Ewe Farm. It’s sharp and piquant like any good Pecorino, but soft and perfect for melting, like queso fresco. When I tried it (after trying the rest of the farm’s cheeses, also delish), the farmer told me that I’d never need mozzarella again. A lightbulb flashed on. 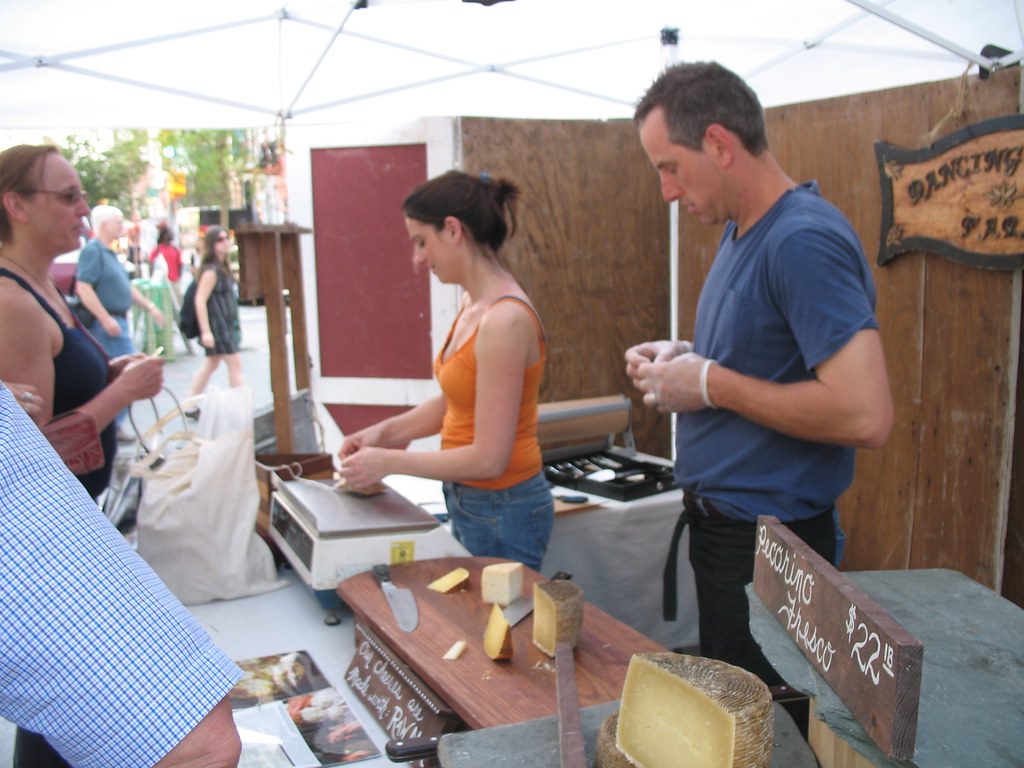 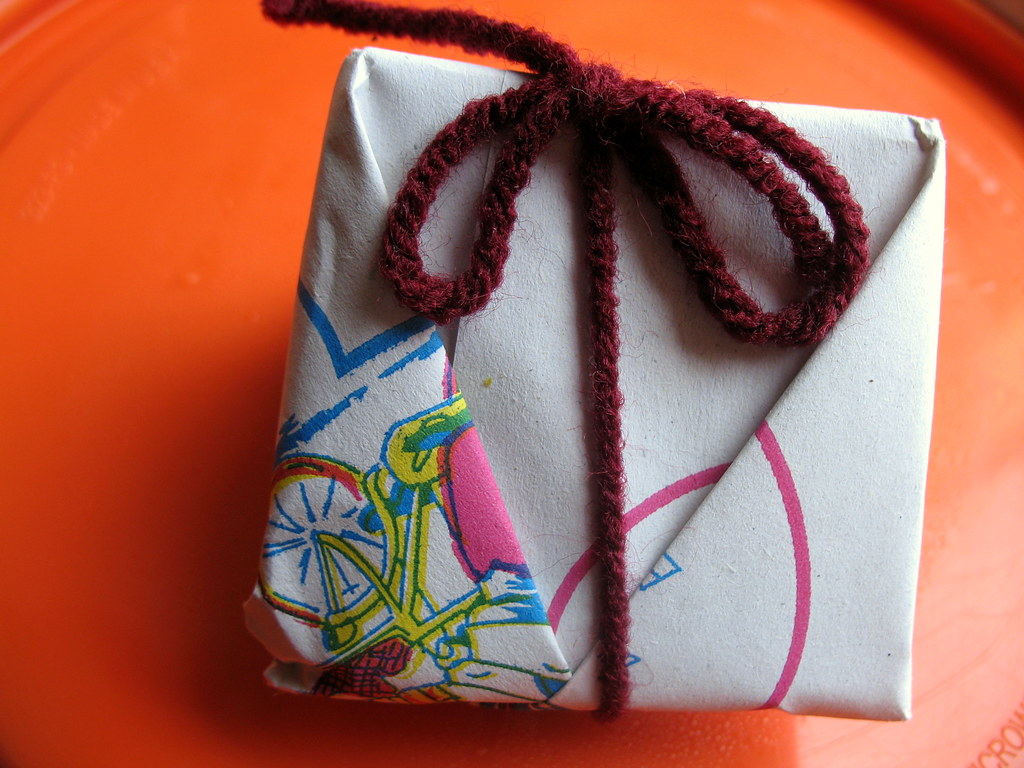 this is how they wrap their wedges of cheese

So an unlikely grilled entree it was on Memorial Day — pizza. I wasn’t terribly confident the crust would turn out well, and even entertained the wildly WRONG thought of placing the dough, topped with sauce and cheese, directly on the rack above the burning coals. Thankfully, a thin metal pie pan at my friend’s apartment saved the day from that would-be disaster. The dough was stretched out to fit it, layered with a simple homemade marinara and slices of the atypical cheese. To make the crust crispy on the bottom, I’d recommend sliding the pizza off the pie pan when it looks like it’s done — the cheese has melted, the crust no longer looks doughy. Then place the pizza back on the grill racks to give the bottom some direct heat, and crisp it up with a few burnt patches. Finally, a few leaves of basil snatched from the patio plant were draped on top for the deceptively classic snapshot. 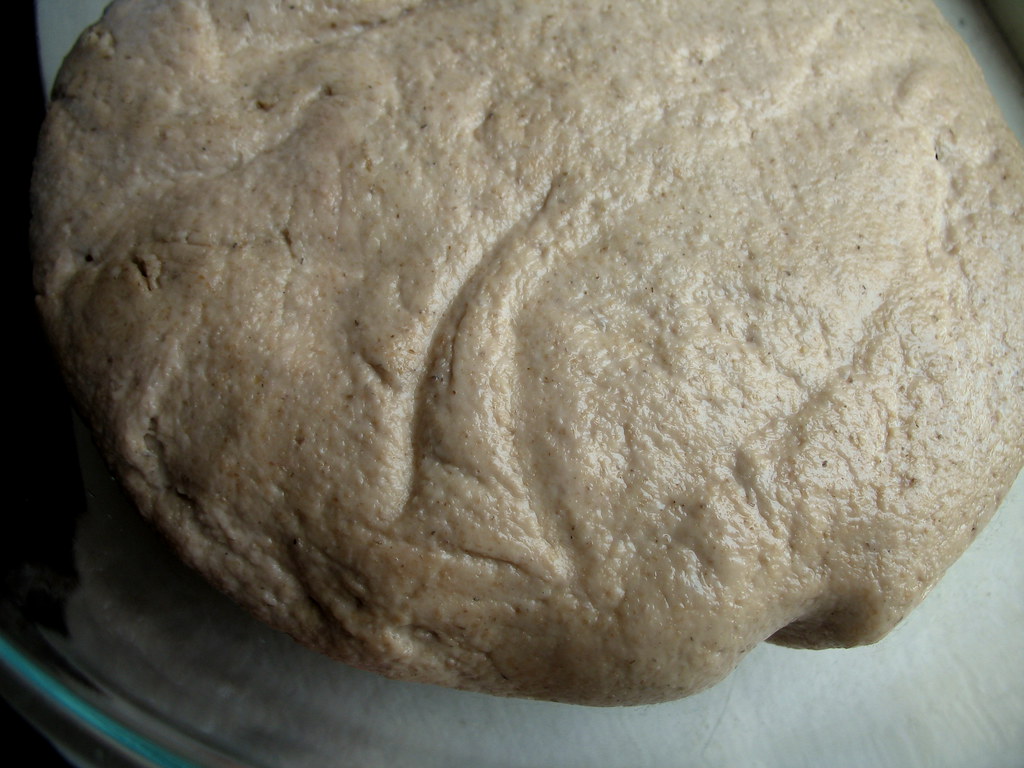 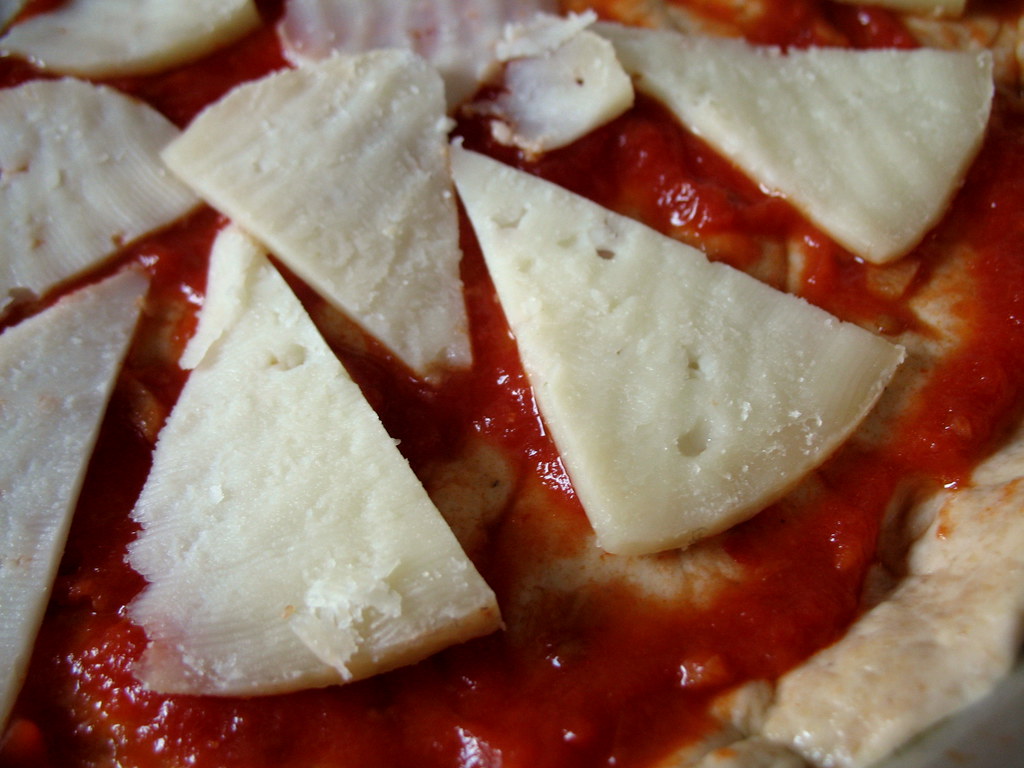 A good part of the fun about cooking for me has always been trying new things and seeing how they fly. Breaking preconceived notions — a pizza doesn’t go on the grill, asparagus can’t be eaten raw — has its own unique thrill. Even if the technique doesn’t turn out for the better, or, worst comes to worse, ends in a disaster, frequent experimentation will show how just how agreeable most foods are to working with you. Just remember to give them an inch when they’re feeling cranky, or are under deadlines.

It just now occurs to me that this wasn’t the first grilled pizza I’ve laid my eyes on. Unlikely, un-recommended, and unwieldy as it may sound, a pizza placed on top of a charcoal-burning grill rack won first place at a barbecue cook-off I co-judged last summer. That one actually had barbecue sauce beneath the cheese, to tie together the whole ‘cue theme, and that griller actually won $1,000 as her first-place prize in the event. So yes, a grill and homemade pizza can get you pretty far. 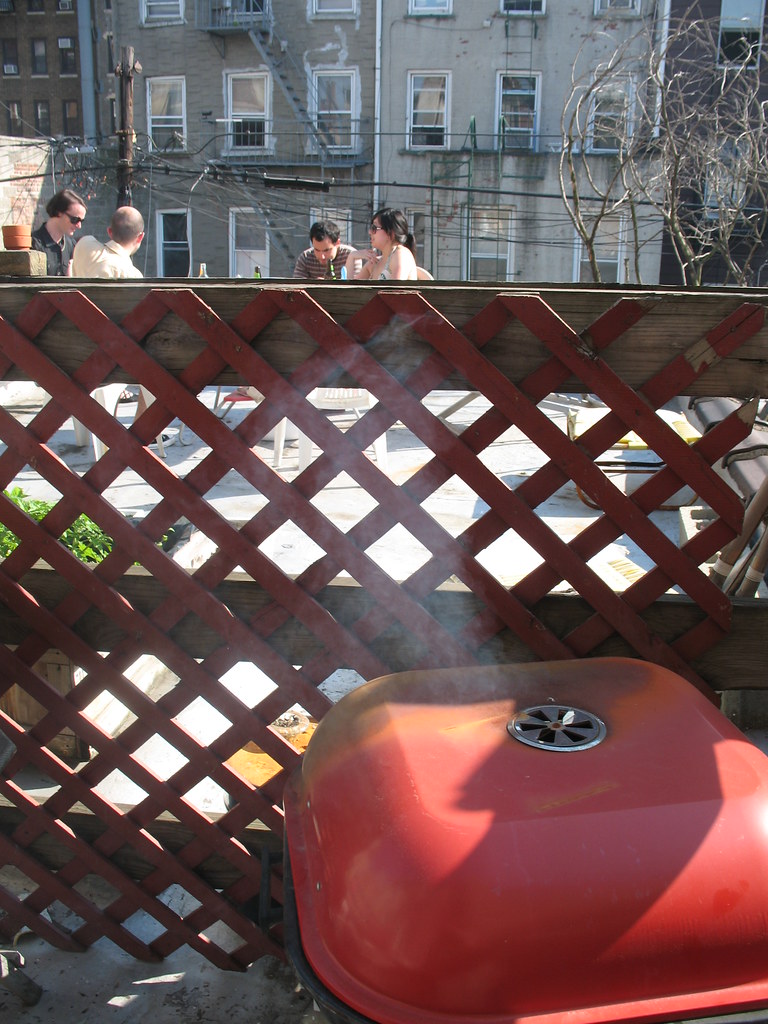 Luckily my friends didn’t mind that the slices tasted a bit like charcoal briquettes. (I should’ve let them burn off a little more before starting to cook.)

Stretch the dough out to roughly the same size as the pie pan and place it on the greased pan. Even out the dough with your fingers, creating a thicker crust around the rim. Spoon on the sauce, and top with the cheese slices.

If using charcoal, be sure to let the fire burn down before beginning to grill. While the heat is still very high (think 500 degrees if using propane), place the pie pan in the center and close the top. After about 10 minutes check. Once cheese has melted and the crust no longer looks doughy, remove the pan from the grill (wearing mitts). Carefully remove pizza from the pan and place directly on the grill rack. Cook, uncovered, another five minutes or so. Top with the fresh basil and serve immediately.

Four brownie points: I can’t vouch for the exact nutritional make-up of this particular cheese, but I can say that raw milk, and especially from grazed animals such as those at Dancing Ewe and most small farms that sell at the Greenmarket, is much denser in essential vitamins and nutrients. It also tastes really good, if you haven’t tried the illegal substance. The whole wheat dough might be less crisp or air-bubbly than what you’re used to from pie shops, but what it lacks in texture (actually, many people prefer the chewiness) it makes up for in fiber.

Seven maple leaves: That the “green” score goes up as it gets warmer out signals the start of growing season in NYC. I, too, have a basil plant and could have spared my friend the leaves I stole, but when they’re plentiful, who cares? The imported canned plum tomatoes from which the sauce was made will hopefully be replaced by fresh tomato sauces come late July or August, and as of now, are really the only thing standing in this recipe to make it non-local.