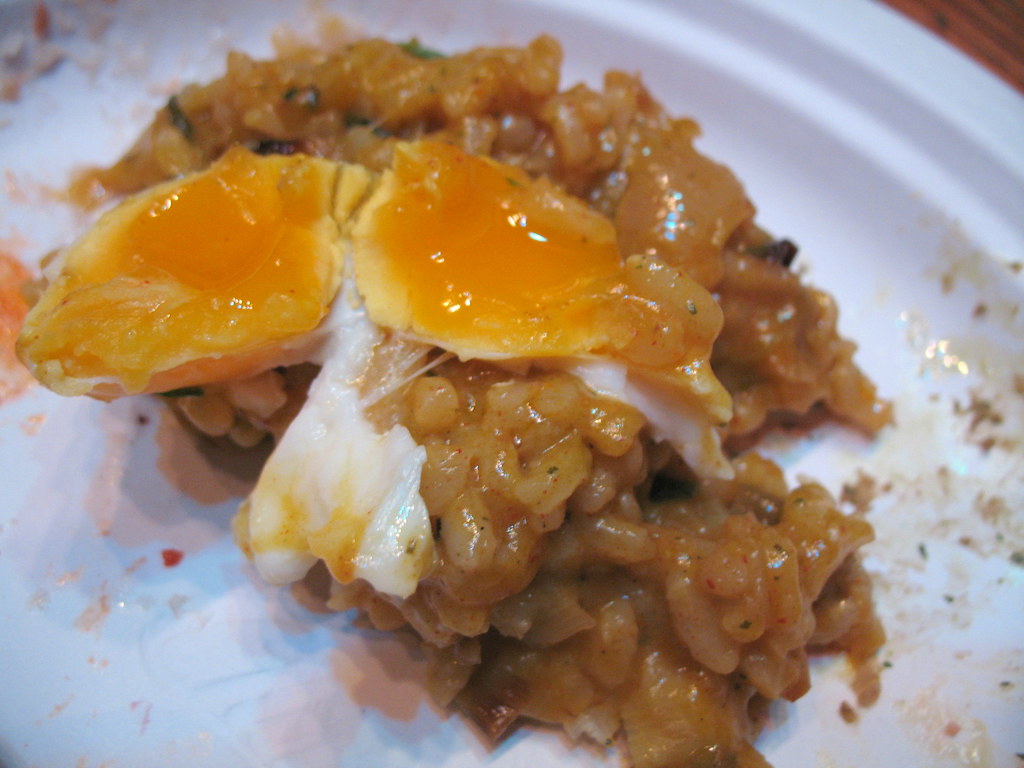 How to say… thanks? For coming out to serve delicious, unique and inspired food, for eating and enjoying the fruits of everyone’s labor, for lending your discerning criticism of said dishes as an audience member or one of the expert judges, for donating your money to Just Food, and for essentially making Karol and myself’s dream come true. From the bottom of our butter-clogged hearts, thanks to all for Risotto Challenging it up yesterday at Jimmy’s No. 43. Especially to Jimmy Carbone, for graciously hosting the fete at his bar.


It was a sunny Memorial Day weekend afternoon when the second-annual risotto cook-off took place, indoors, sprawled throughout the bar’s back room where the contestants served at their stations, and the general seating area, where folks took their plates and washed them down with craft beers. We had more folks stream through than I’d hoped for despite the circumstances (I made only two runs to get more plates and forks!), and because of it, we were able to raise more than $1800 for Just Food at the end of the day. I’ll add that this has been one of the best-tasting cook-offs I’ve attended (and I’ve been to many). Too many palate-pleasers for one plate. 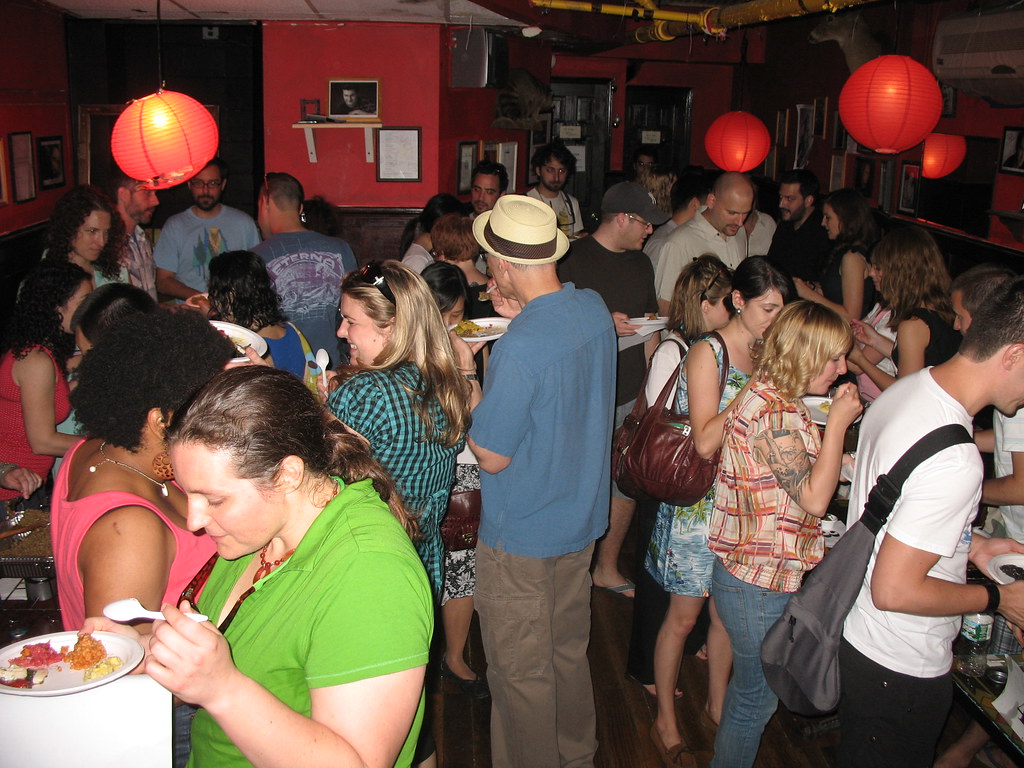 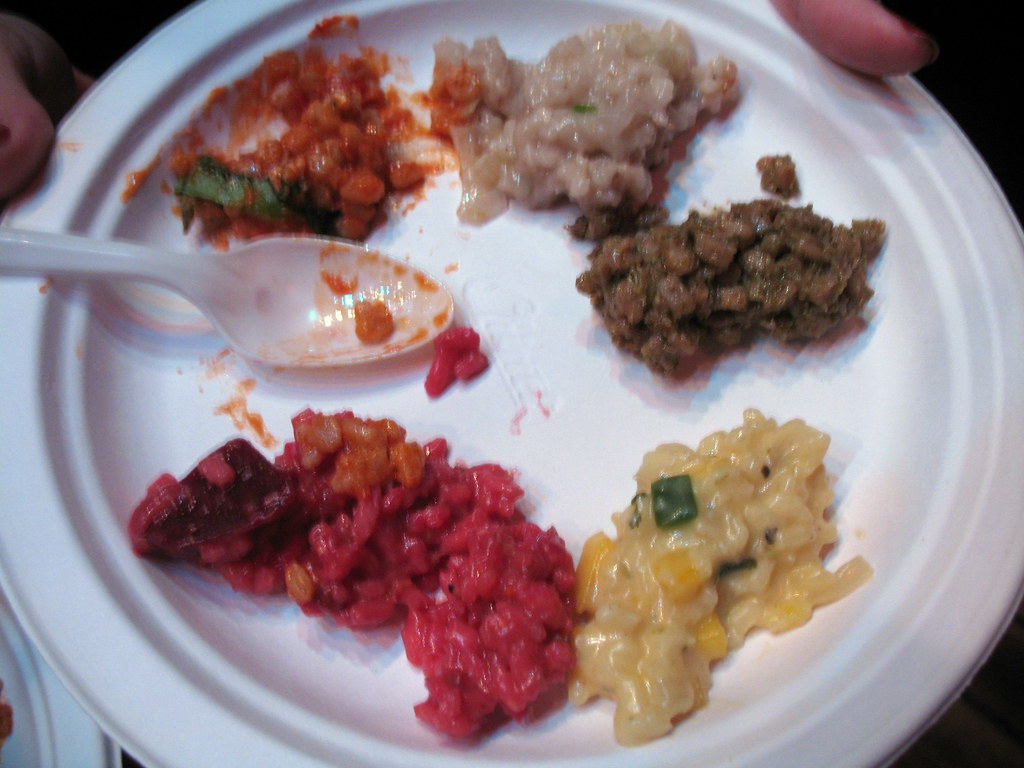 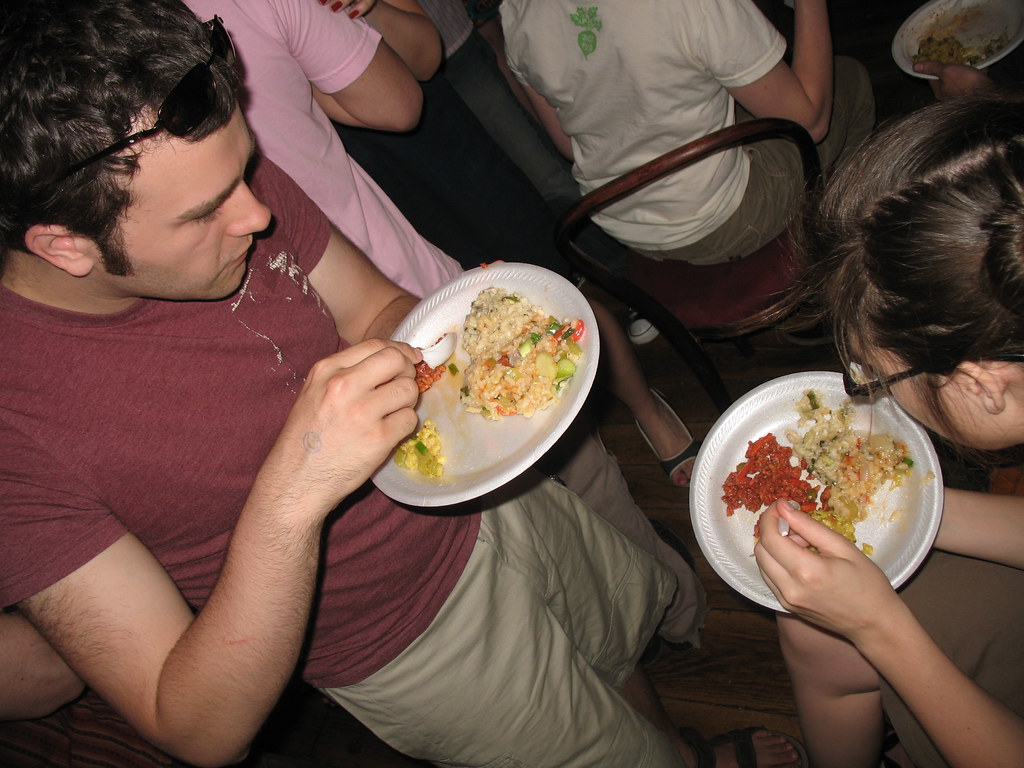 The plates of risotto, once a guest was finished walking through the serving stations, actually resembled a painter’s palette, too. Of the 14 entries on display, there was a deep magenta risotto with beets and raspberry jam, a shiny black risotto with squid ink, a bright yellow risotto with mangoes, an umber farro risotto with lots of mushrooms, a ripe red marguerita pizza risotto, and a “sunset” orange risotto with shrimp. There were risottos with multiple colors, including one with slow-roasted tomatoes and other veggies, and an etouffe-inspired risotto with spring veggies. I miss them already.

But everyone wants to know one thing: who won? Well, there’s lots of answers to that question, as lots of people won something. Those that for some reason didn’t make the cut included ones that were some of my friends’ favorites: Ricky Silver’s fresh mango and goat cheese “salsa” risotto (#3), Marsha Nicholson’s “Risotto di Farro con funghi porcini e due pesti” with ramps, walnut and aged gouda (#4), Jason Anello’s “Poor Man’s Risotto” with monkfish, zucchini and a “secret spice” (cardamom!) (#11), Jaime McCallum’s “Solidarity Forever” risotto with fiddleheads, mushrooms and butternut squash, and Roxanne Aubrey and Peter Marina’s “New Orleans Crawfish Etouffee” risotto (#12), with all that goodness and more. I don’t think these guys need to be reminded from the many plates scraped clean how great theirs were, but in case they do, keep your chins up, kids — you done good.

The judges spent a good hour or so deliberating together over how to place their winners. Turned out they were pretty split! The panel of local food authorities put together to judge the contest consisted of chef Mark Bello, who schooled me and everyone else at the Cassoulet Cook-Off, and who “schools” people for a living at his hands-on pizza workshops throughout the city; the erudite food blogger Zach Brooks, from Midtown Lunch, who I enjoy the company of so well even though our blogs are complete antitheses of one another that something’s either so wrong or so right in this world; and Erin Zimmer, a regular contributer and editor at Serious Eats — need I say any more to hail to the queen, baby? (Plus, Erin was in the process of moving this weekend but still made it down to chow!) 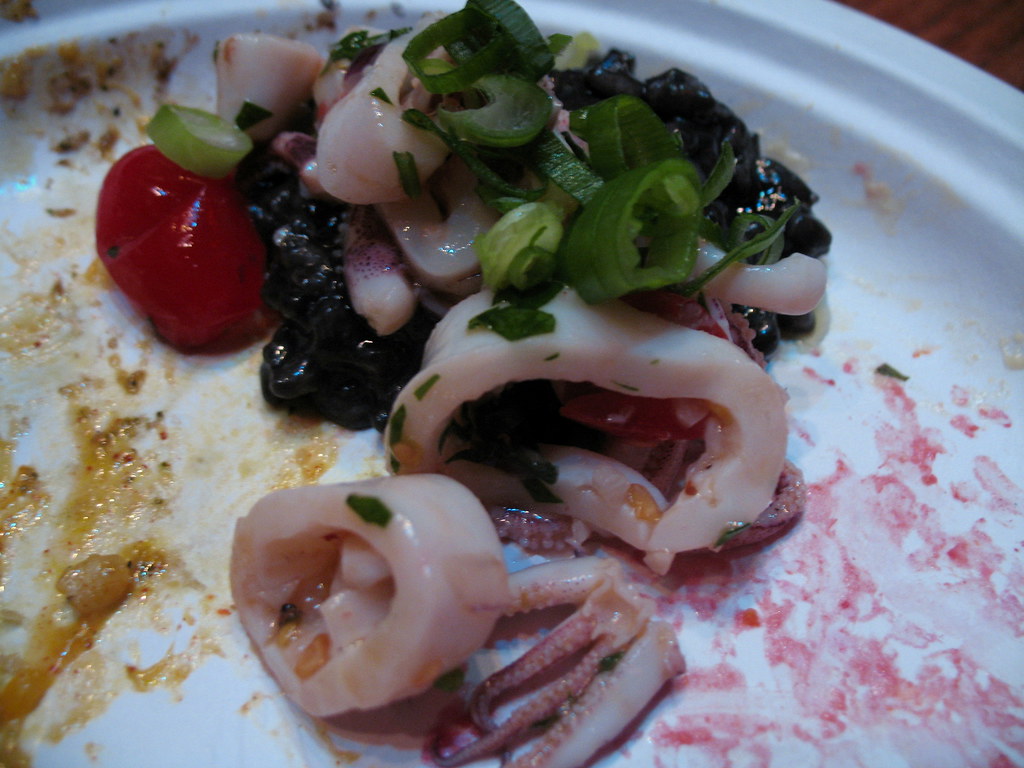 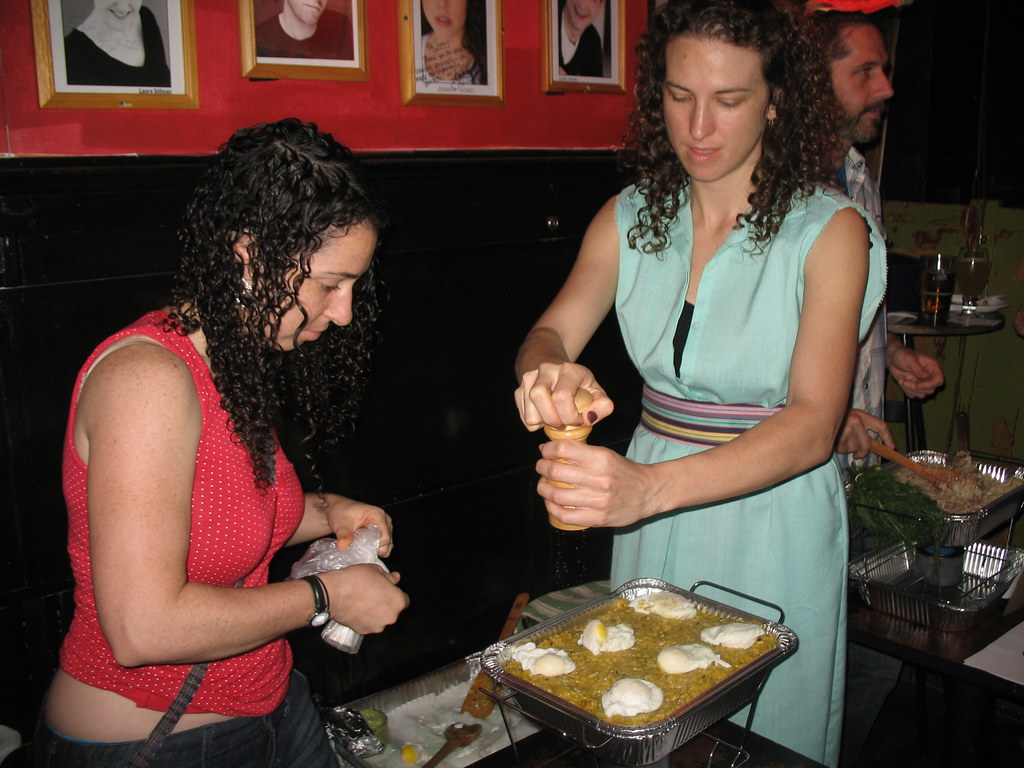 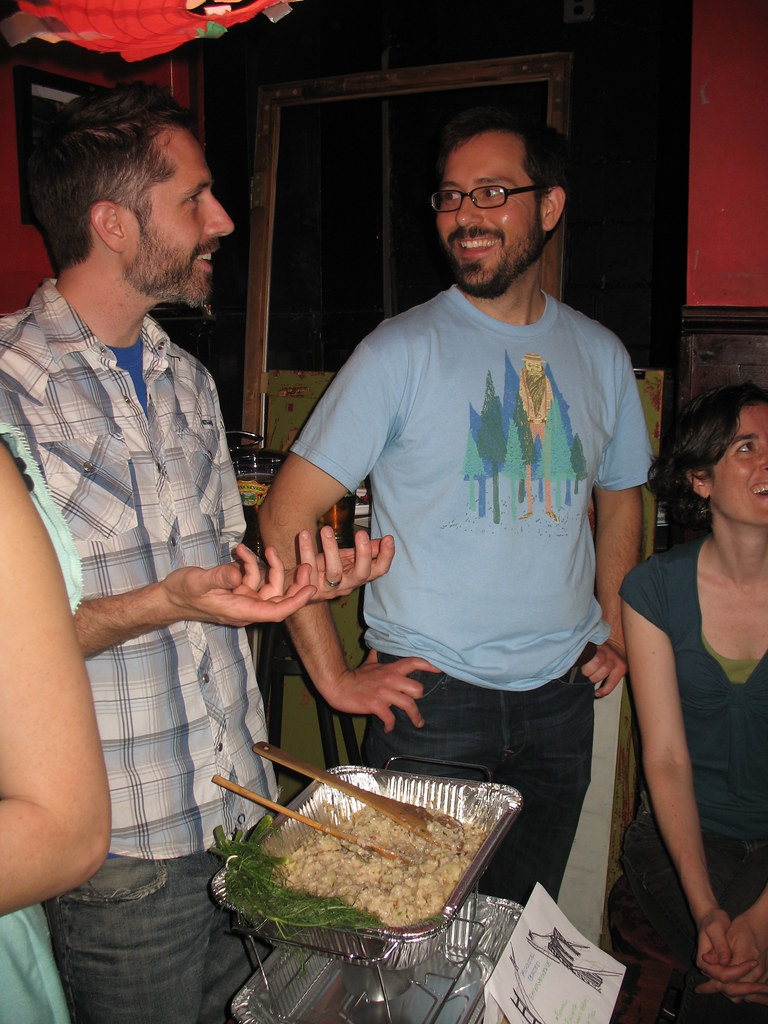 bearded buddies Vince and Scott with their pancetta-fennel risotto 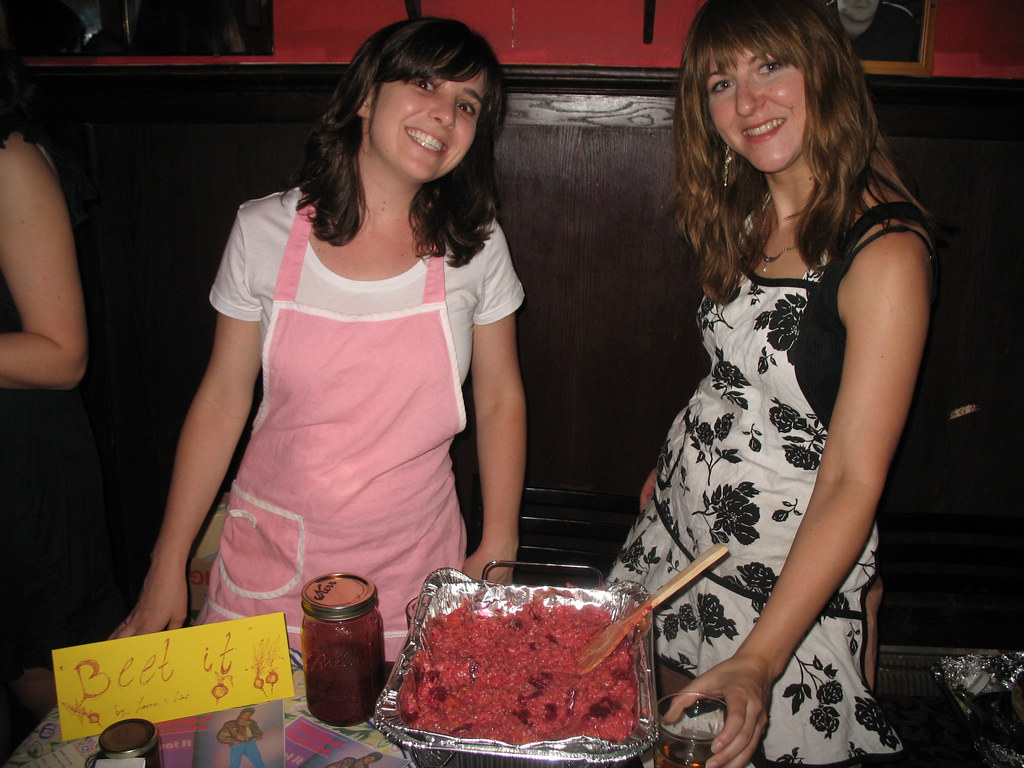 Liv and Laena with their “Beet It” risotto

Despite their differences, these judges came down to their final decisions, finally. In the award for awesome risotto with “not enough poached eggs” was the unexpected effort by Arin Kramer and Alyssa Casey, whose “Urban Chicken Risotto” (#7) incorporated grilled leeks, gremolata, anchovy butter and poached eggs from the chickens that Arin and husband Ben raise in their own backyard. For that, they won a seat to dinner at Ted & Amy’s Supper Club — hopefully I’ll get to join them there. The judges also loved Eliza Ronalds-Hannon and Tali Biale’s squid ink risotto (#4) topped with a lemony squid, tomato and scallion salad, another adventurous and eye-catching risotto twist at the event, so they won a gift certificate to the Brooklyn wine shop, Thirst. The award for the best risotto adaptation of a Vicki Sue Robinson song went to Laena McCarthy and Livia Manfredi’s beet and raspberry jam risotto (#2) with balsamic, aged goat cheese and orange zest (I might add that the only person who got the reference to “Turn the Beat Around” in the crowd at first was Cupcake Takes the Cake blogger Nichelle Stephens). Be on the lookout for Laena and Liv’s artisanal jams at shops like The Brooklyn Kitchen this summer. They won a covered saucepan from Scanpan, “perfect for jam.” Eve Dilworth’s “NY State Strawberry Rhubarb” risotto (#13) impressed the judges with its creamy, mascarpone-infused texture and fresh strawberry-rhubarb topping, so she earned a subscription to Diner Journal. The judges gave Vince Trotter and Scott Lachut’s “Bicoaster Bearded Efferevescence” risotto with fennel, pancetta and jasmine tea (#8) a thumb’s up with a stash of Mast Brothers Chocolates, “because the Mast brothers also have beards.” 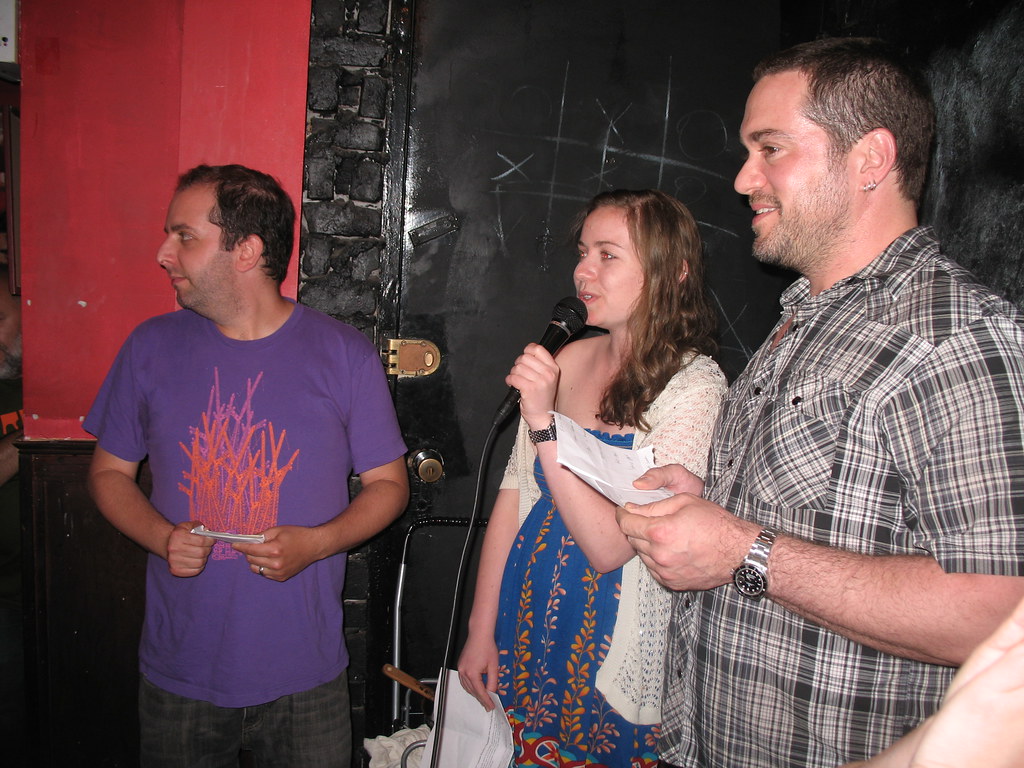 In honorable fourth place with the judges came Mike O’Neill’s rad(ish) risotto (#9) — he got a fry pan from Scanpan. Third place, Jackie Beach and Jef Walker’s “Oh So Slow” Risotto (#14) won for its savory, all-vegetarian blend of aged goat cheese, caramelized onions, roasted tomatoes in a stock of slow-roasted mirepox and fennel. For added flair, they topped each portion of their risotto with a crisp parmesan chip, and took home a Scanpan Dutch oven for their prize. Who could forget Nick Suarez’s “Di Farro’s” Farrotto Margarita risotto (#1), a take on the famed NYC pizza joint DiFaro’s classic pie with farro instead of rice and lots of homemade tomato sauce, freshly snipped basil and a dropper’s worth of good olive oil on top? With a double-silver (Nick also came in close second place in the audience award), he won a $100 gift certificate to 1 Dominick wine bar for second place. The judges’ first place award, though, went to Noah Berland’s seafood-studded “Sunset Shrimp” risotto (#10), with carrots, beets and peas. Now this is a guy who received a fair share of public slack following the Tofu Takedown a couple weeks ago; in that cook-off, he received the not-so-coveted award of “Worst-Looking Best-Tasting” dish for his green tea creme brulee. (At a recent family reunion, fellow Tofu Takedown judge Akiko was greeted with a host of snot-related jokes for being quoted in the front page of the New York Times‘ Dining section saying that an entry had looked like snot.) Needless to say, Noah sucked it up and turned out a brilliant risotto entry that tasted and looked good, both. What a comeback. That risotto was pungent but perfectly balanced, with a satisfying ratio of veggies (the carrots were thinly sliced yet visible, the beet juice staining the concoction salmon roe-red) to seafood chunks. Noah won a Mario Batali brand cast-iron “risotto pan,” donated by The Brooklyn Kitchen. 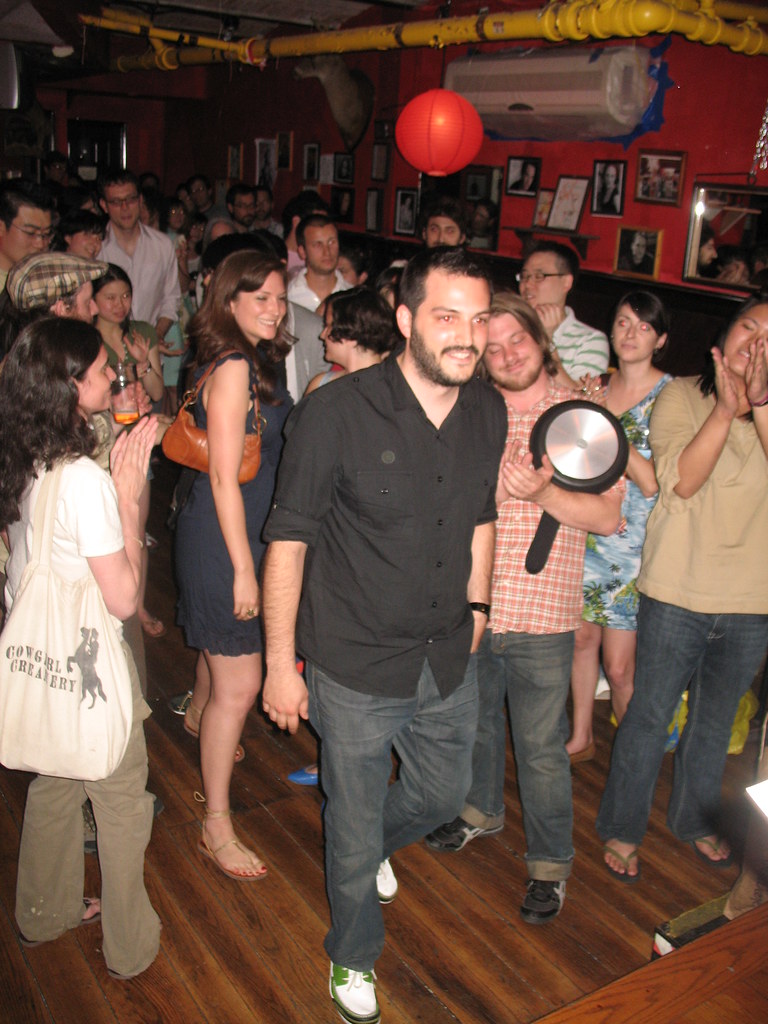 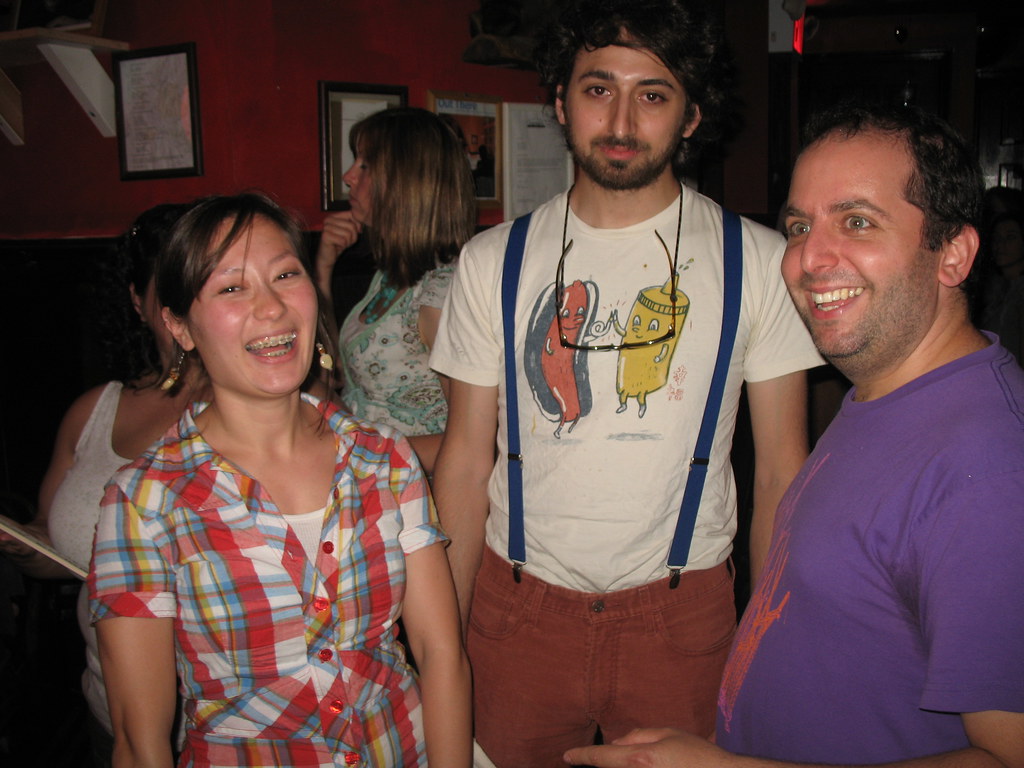 After the ballot box was upended and all the audience’s votes were counted, the final decision for first place in the popular award was decided by one vote. By a hair (over Nick Suarez), Jackie and Jef’s “Oh So Slow” risotto placed again. This time, they won a $100 gift certificate to the very bar and restaurant hosting the event, Jimmy’s No. 43. No stranger to home cooking, Jackie’s been around the cook-off scene, entering the Bacon Takedown, and as a fellow hapa, she recently put in a killer communal cooking effort at the Hapa Kitchen‘s May Day dinner (and hopefully future dinners, too!). Amazing that both first and second place in the audience awards were all-vegetarian entries, as well — and many others. The stacks of ballots were pretty spread throughout eight or nine entries, too, which varied drastically in ingredients. I think it’s safe to say that there were many big wins of the event. And just below is the recipe for judge’s favorite, Noah Berland’s! (For “Oh So Slow” risotto, check out the recipe and great photos on Jackie’s blog, Devour This!) 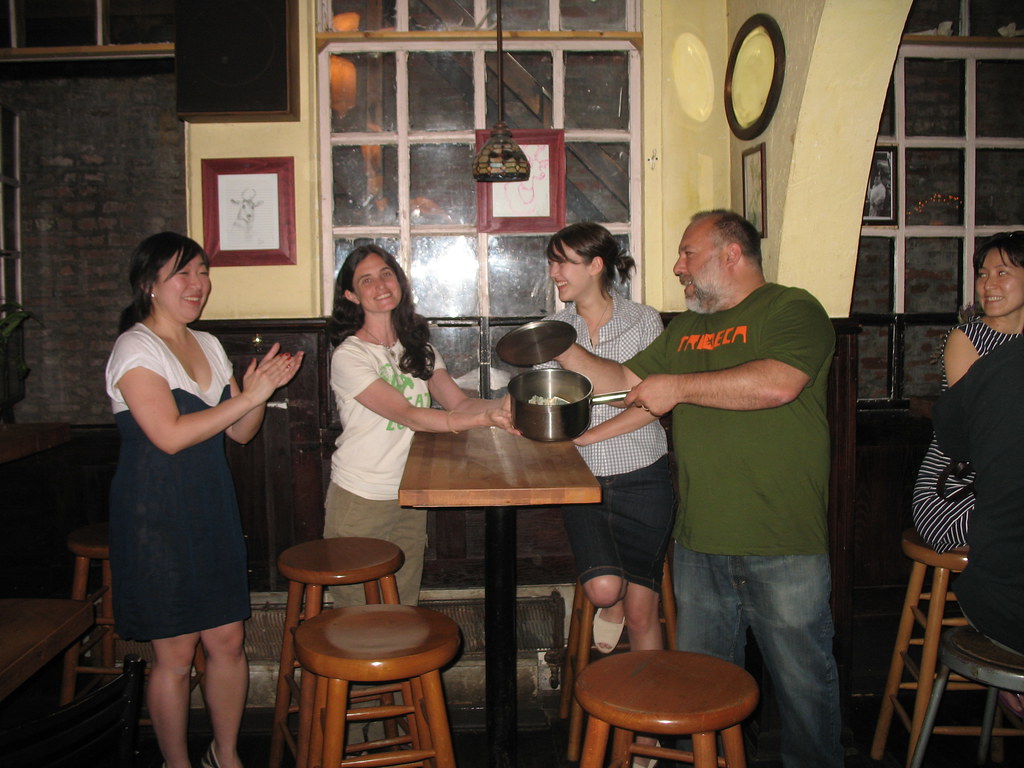 At the end of the entire risotto experiment, Jimmy, Karol and I handed over a saucepan filled with hard cash from the door donations to Just Food director, Jacquie Berger. After sparing some of the share for the hostess and necessary supplies, a total of $1,800 and change was given to the nonprofit’s cause. Find out about more of Just Food’s activities and ongoing campaigns to spread healthy, local and sustainable foods throughout NYC at its website (i.e. a series of beekeeping events in honor of “Pollinator Week” in late June). Hope to see you at one of those soon.

Shell the shrimp and place the shells into a quart saucepan and cover with water; simmer for an hour. Cut the shrimp in half as if you were butterflying them, but all the way in half and de-vein them.

Cut the beet in half lengthwise and broil for about 5 min’ they should get very slightly charred. Cut the beets into chunks and place in a blender with the stock from the shells and blend finely.