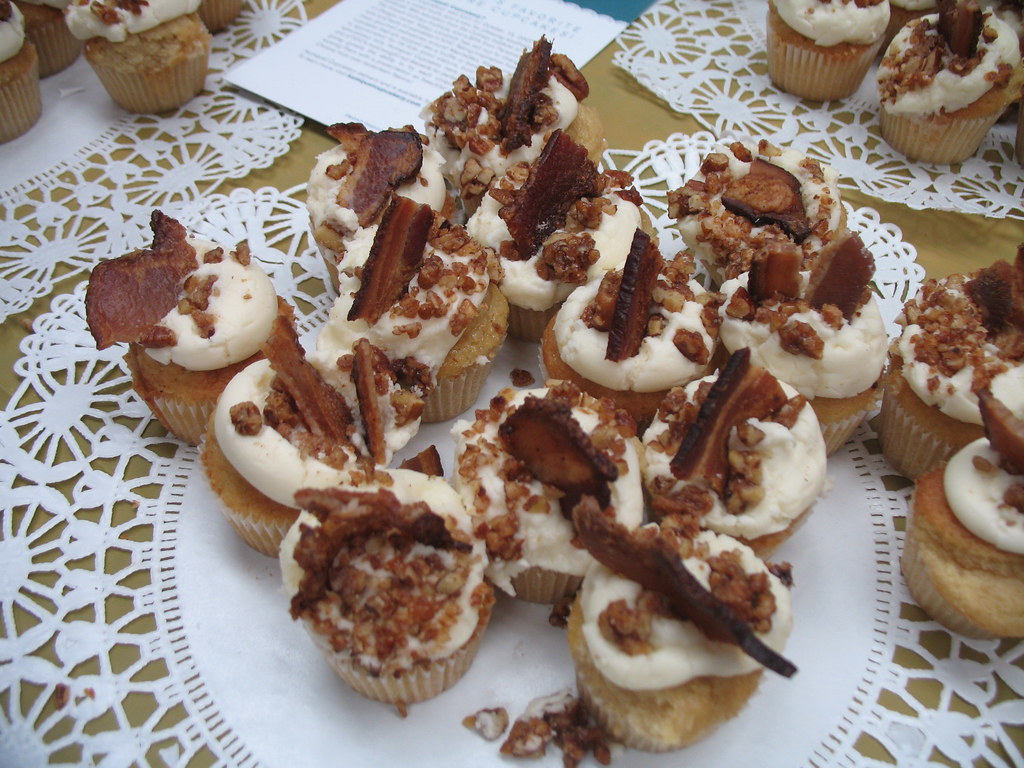 To all those tired of the pork belly and bacon food fad, I’ve got bad news for you. It’s far from over. Anyone who might have walked within a one-block radius of Radegast Biergarten in Williamsburg sometime between 4:45-7pm yesterday would have seen the hoards of hungry bacon lovers lining up outside the bar (“Is this for the bacon festival?” I heard a lot of). When I arrived at the time the first-ever Bacon Takedown officially began there, 5pm, that line reached well down the block. 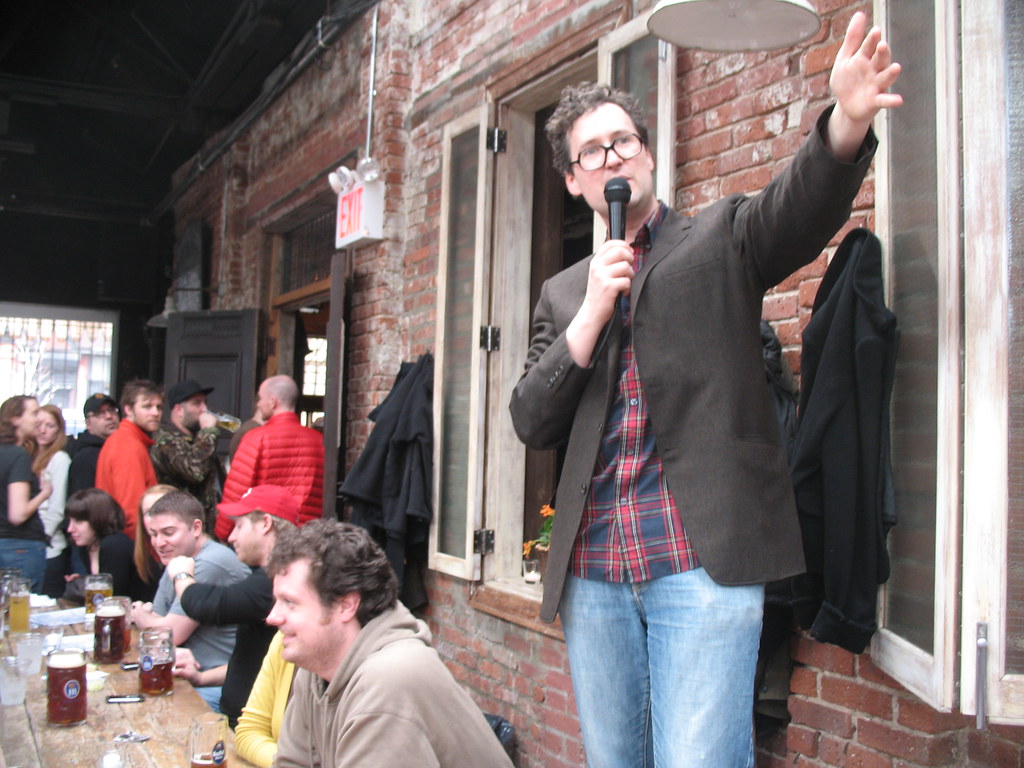 Matt Timms creates an impressively ordered line out of the chaos

Host Matt Timms, creator of the Chili Takedown, surely hit a soft spot for food fanatics by calling for a bacon-themed cook-off. Registration for hopeful chefs was cut off about a month before the date of the contest, capped at thirty contestants. Even after finding a bigger venue in Radegast Biergarten for this Takedown (as opposed to longtime Takedown spot Union Pool), it’s apparent that this food competition has once again outgrown its former shoes. 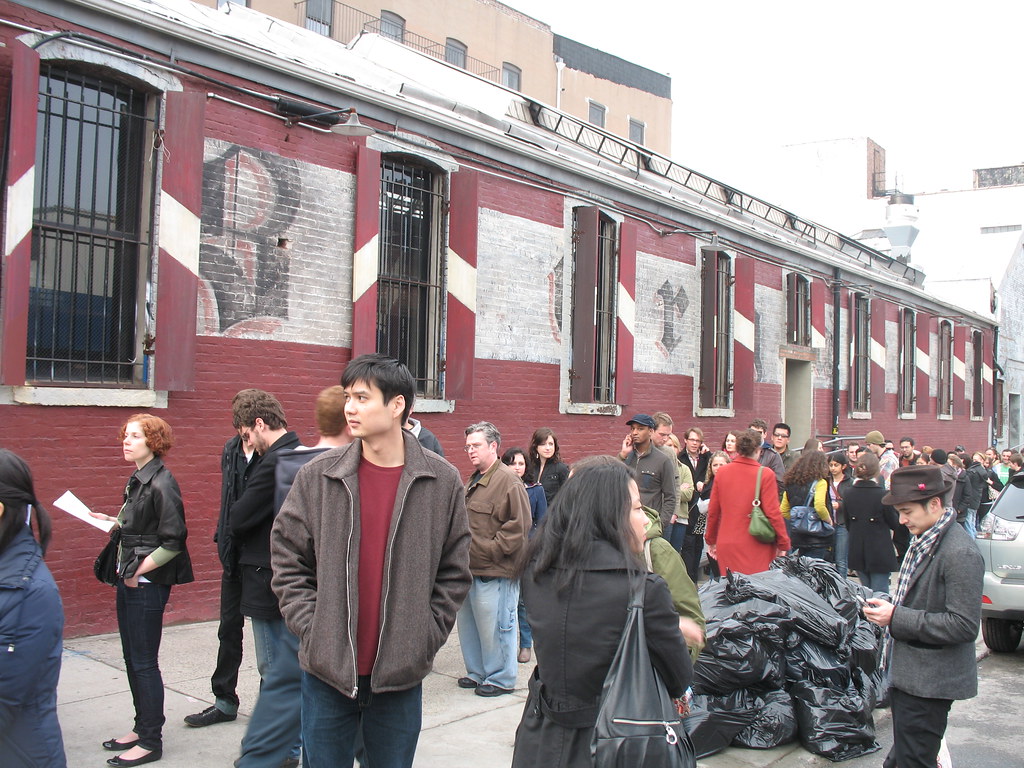 outside the Biergarten, many waited for hours 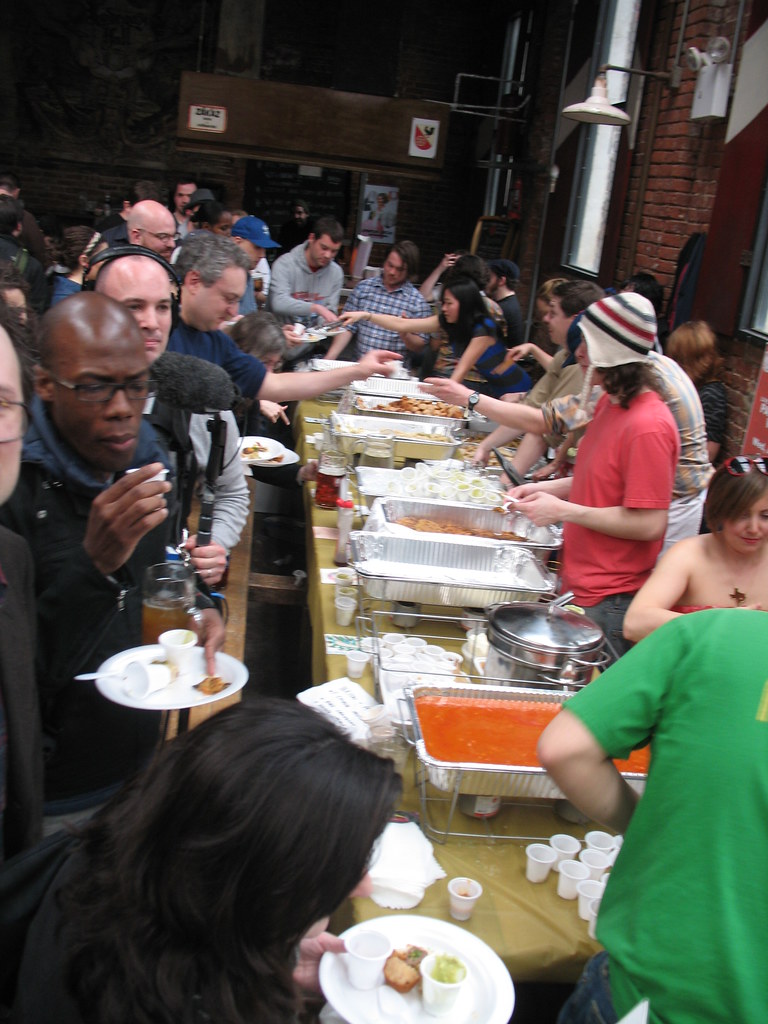 a glimpse of the sampling stations 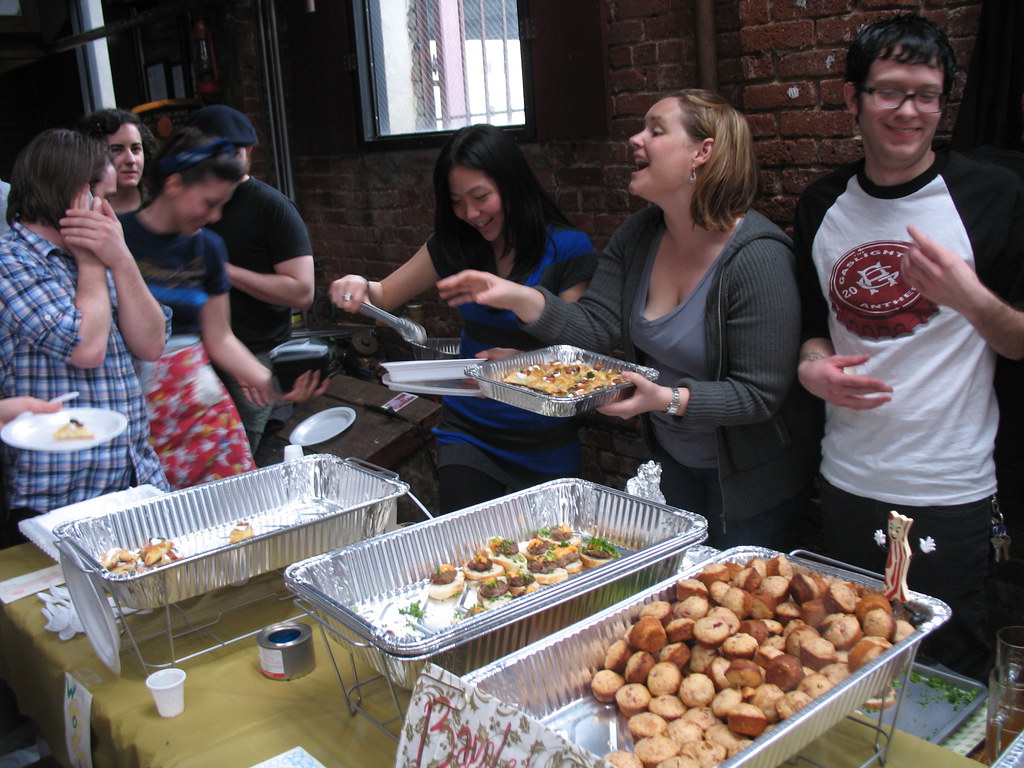 contestants serve with a smile

And for all the hubbub, I must say that the contestants themselves really upped the ante at this contest. I didn’t know what to expect from thirty amateur chefs who entered the event, but I was pretty blown away by their brilliance. I don’t think I tried anything that wasn’t completely unique and tasty. Okay, so there were two tamale entries. And there were two bacon-flavored ice creams (one with avocado and one with Bourbon). But aside from that, everyone seemed to go their own way, and come out fabulously. Here’s a glimpse at some of the bacon food porn. 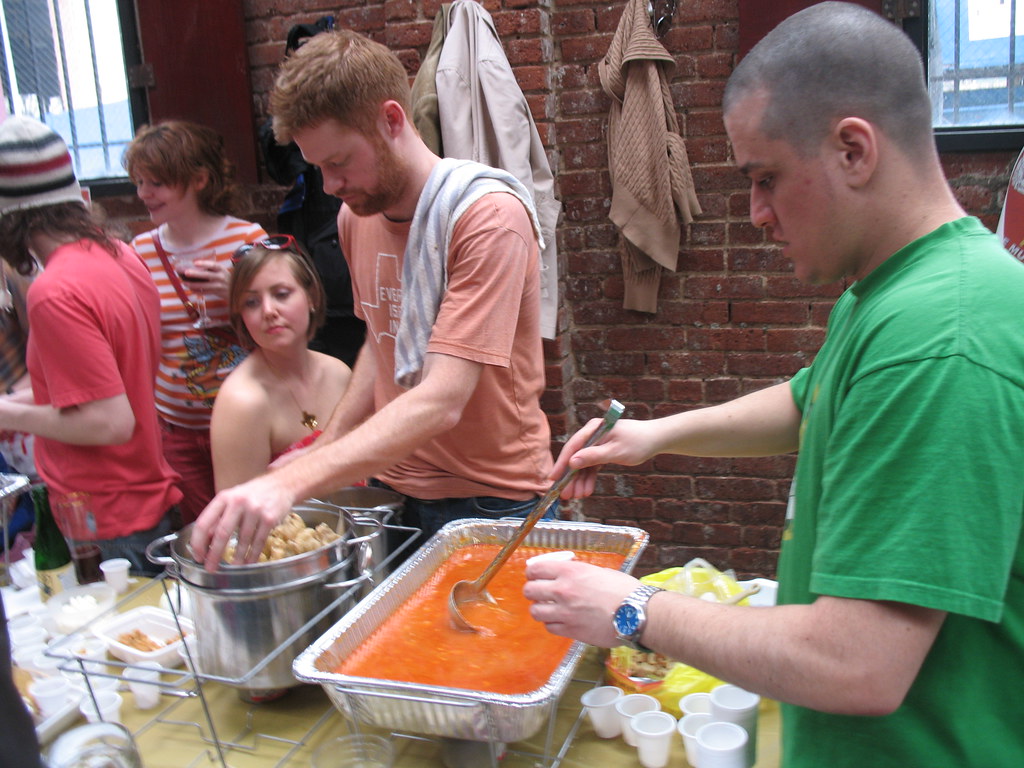 a bacon tomato soup with crisp croutons and grated cheese 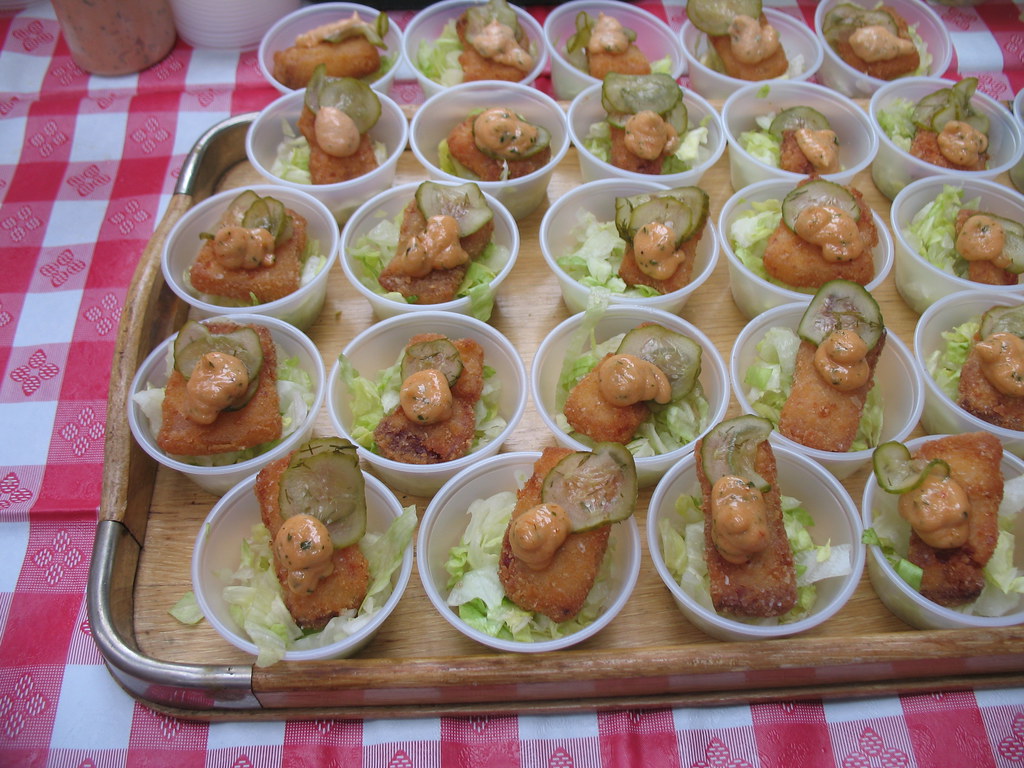 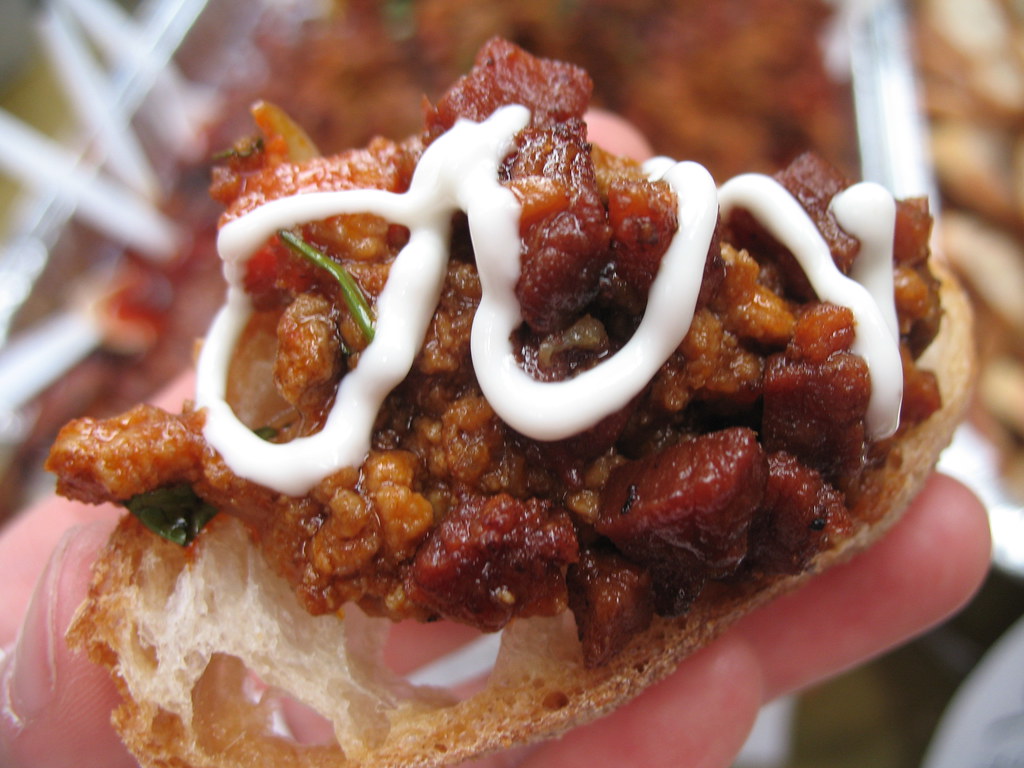 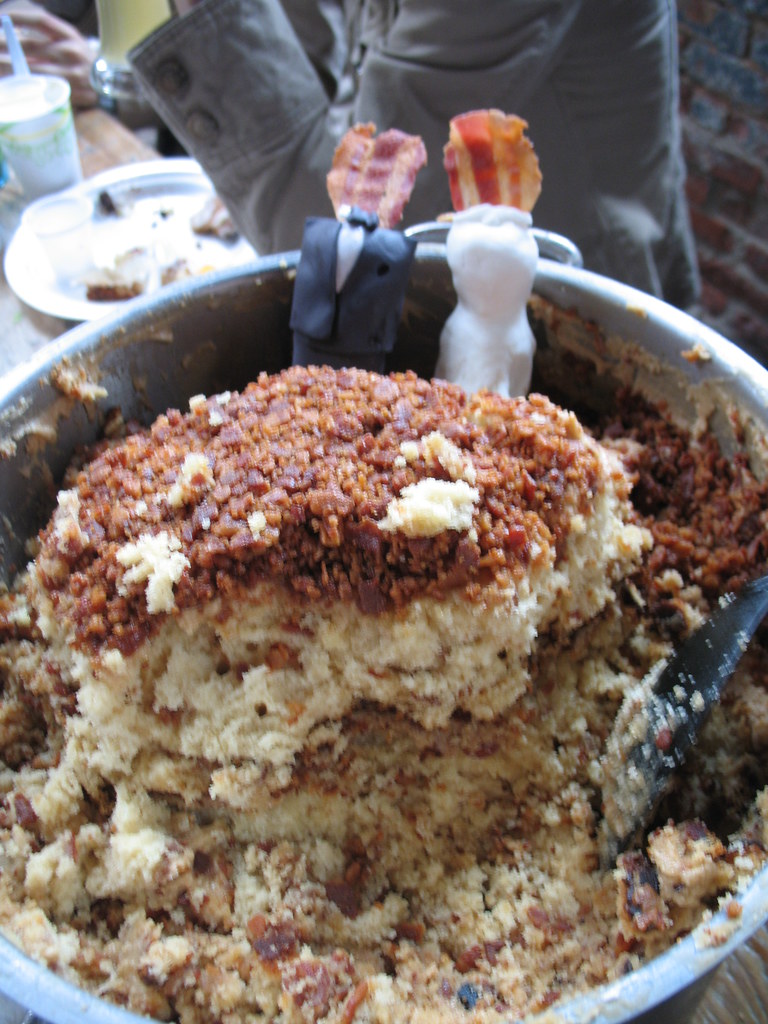 a moist bacon cake with local honey and pb 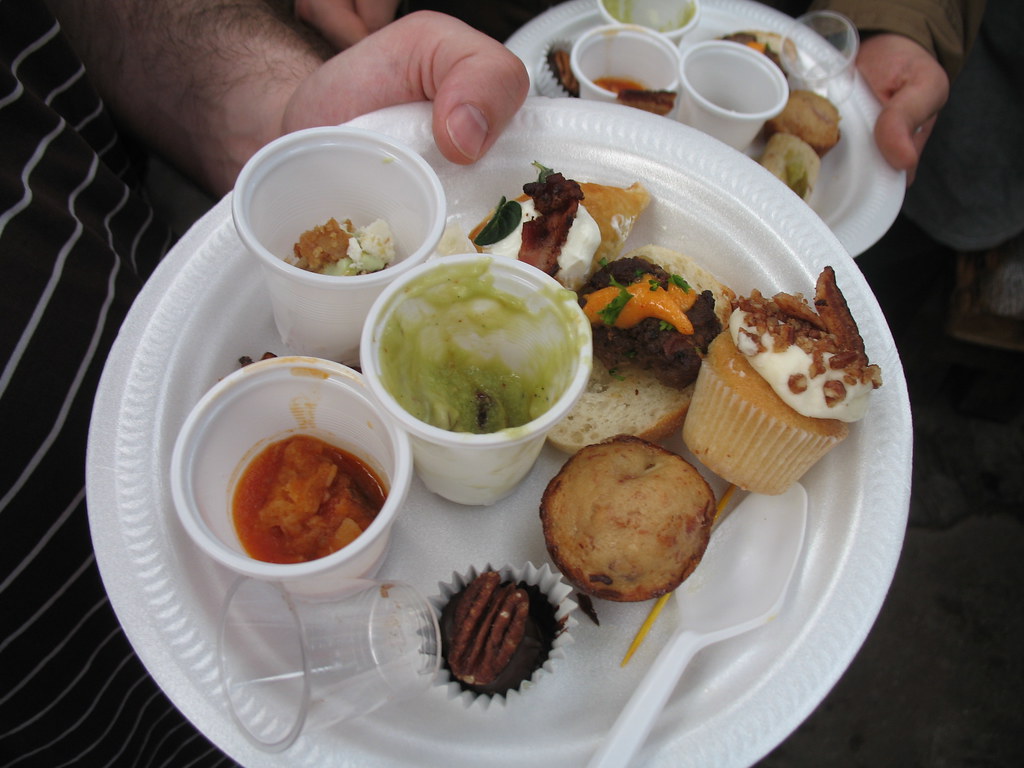 And those beautiful bacon cupcakes (pictured at top) definitely put my once birthday effort to shame. Indeed, so many entries blurred the line between savory and sweet. Among the many desserts served up were bacon truffles, brownies, muffins, turtle bars — even bacon applesauce. Bacon has firmly become a darling of the dessert world as well as the breakfast world. (For that matter, I didn’t see any breakfast-like entries at all.) 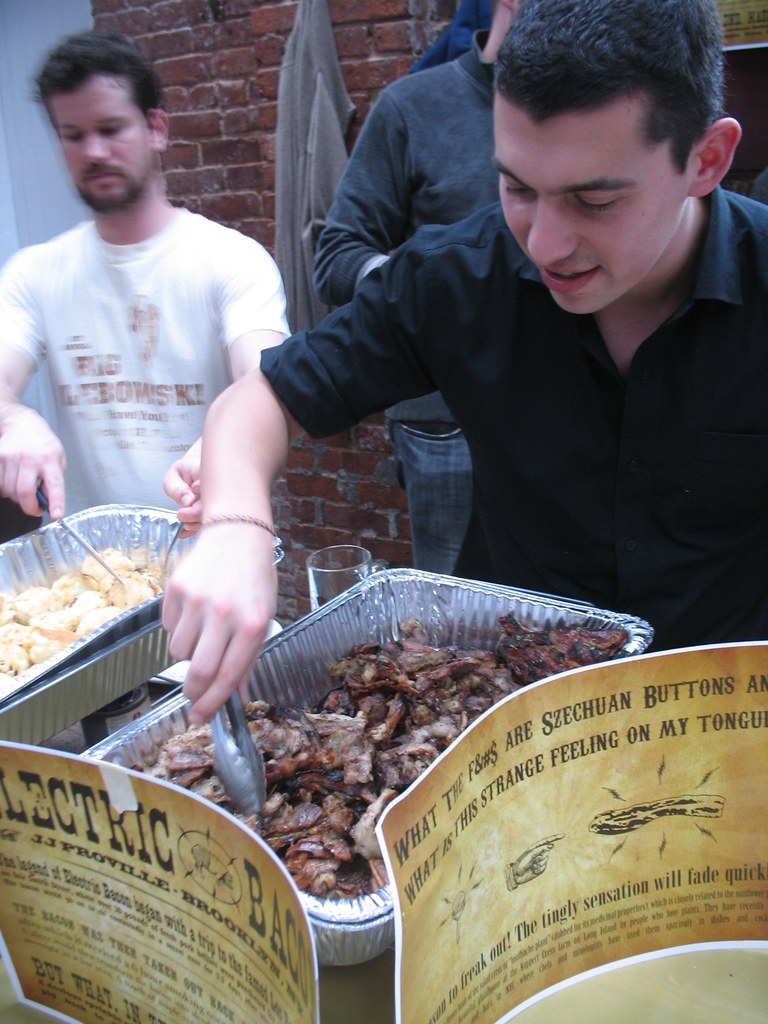 deceivingly simple: slabs of home-cured bacon (which took a week to make)

One trend I was a little disappointed I didn’t see as much of yesterday was home-curing the bacon itself. Two of my favorite entries of the event, the deep-fried pickle-topped bacon a few photos up, and the Szechuan-inspired, sweet-and-smoky bacon just above, featured the chefs’ own home curing methods and flavors. I realize that not all home cooks are at this level of expertise yet, but kudos to these folks for going the extra mile. (And doing so deliciously.)

So, who won this whirlwind Bacon Takedown? Well, to begin with, who were the judges? Judges happened to be a couple pals of mine, both professional chefs. Akiko Moorman (formerly of Momofuku Noodle Bar) and Charlie Izenstein (of Minetta Tavern) ate their way through each of the thirty stations and came up with their top three picks. Then the audience, as usual, decided their favorites. I’ll start with the judges’ awards.

In Third Place for the Judges’ Award: Olin Moran, with the bacon tomato soup! The only soup in competition, and by far the best tomato soup I’ve ever had.

In Second Place for the Judges’ Award: Keavy Landreth, with the bacon cupcakes! These were not only stunningly gorgeous, but had a depth of crispy, moist and fluffy textures. Great call also on making them cute miniature-sized ones.

In First Place, for the Judges’ Award: Jonathan Proville, for the Szechuan-inspired, home-cured “Electric Bacon.” I’ve never had bacon that tasted anything like his complex, innovative take. Also, amidst so many dressed-up entries, I found his irregular-sized slabs of straight-up bacon a refreshing presentation.

There were so many great entries that didn’t receive awards whatsoever. I feel for you guys, for putting in such enormous time and effort. I also wish I’d joined the fun and entered something in this Takedown, too (but for reasons of a conflict of interest which I cannot get into right now, had to decline). Thanks for helping make history in Brooklyn cook-offs, everyone. And now, for the Audience Awards. 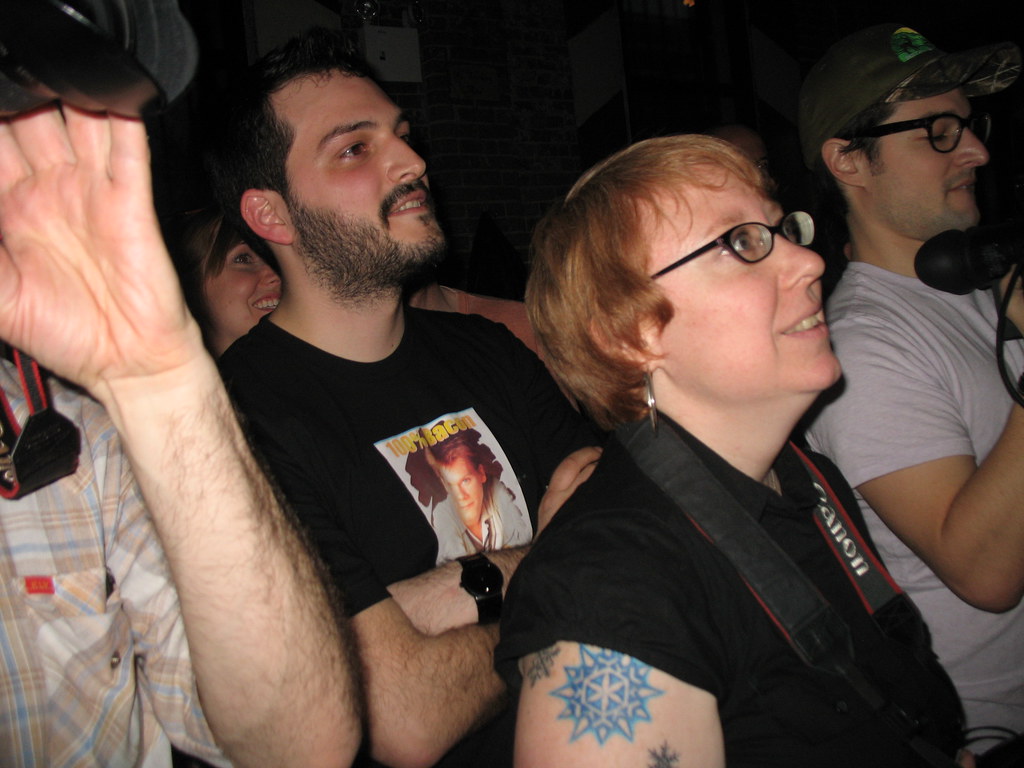 Tied in Second Place for the Audience Award, then, were Nick Suarez with his bacon Sloppy Joes and Theo Peck with his deep-fried, panko-crusted bacon with homemade pickles and tomato aioli atop crisp lettuce. You might recall from last week’s Chowder Slam that these two both placed for awards in that cook-off. In fact, they’ve both placed in or won numerous cook-offs. The friendly competition that’s built up between them has probably provoked both to create their best ever each time. (You could say they’re sworn rivals of the cook-off scene, but it’s a lot more laid-back than that… at least, I think… ) 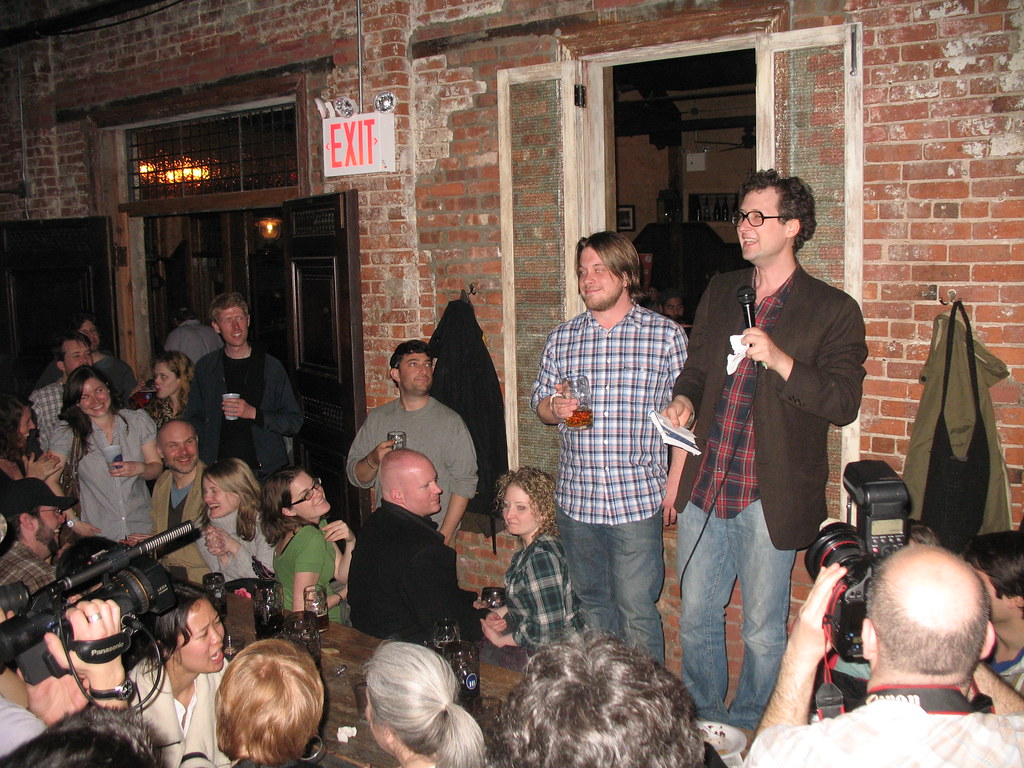 In First Place for the Audience Award, and this, folks, is THE award at every Takedown, was Mike O’Neill for his bacon Bourbon ice cream. Mike has competed in several Takedowns ever since their humble beginnings, and I’ve competed alongside him at many of them, too. Neither of us have ever won first place at any of them. Until now. What a win, too — that ice cream was delirious: crispy bacon, a creamy Bourbon-flavored base. Well done. I might add, too, that Mike borrowed my ice cream maker bowl in order to churn out 300 servings of this ice cream over the weekend (I didn’t realize that this was what he was up to when he asked to borrow it, though). So, perhaps I may take a tiny, tiny part in his victory? In any case, congratulations. (And hopefully I’ll have the recipe for it coming up in a separate guest-recipe post!) And now you can make the winning ice cream, too!

Lay the bacon strips on a baking sheet lined with tin foil. Sprinkle enough brown sugar to cover each strip. Bake for 5-7 minutes at 350 degrees until the sugar starts to melt, about 5-7 minutes. Flip bacon slices and drag through the fat/sugar. Sprinkle with more brown sugar and bake for another 7-10 minutes until crisp. Place bacon on a wire rack until cool and chill completely in refrigerator.

In a heavy-bottomed pan, melt the butter over low heat. Add 1 1/2 cups of the half-and-half, 1 cup brown sugar and salt and just bring to a boil. Whisk egg yolks in a separate bowl and add a spoonful of the hot half-and-half mixture while whisking to temper. Repeat process a few more times. Add the egg yolk mixture to the half-and-half mixture in the pot and stir thoroughly. Add the Bourbon, and continue cooking until mixture is thick enough to coat the back of a spoon, stirring constantly. Strain into 1 1/4 cups of cold half-and-half. Whisk thoroughly, cover and chill in the refrigerator at least 6-8 hours (or overnight).

Chop the bacon strips into small pieces. Churn into ice cream following your ice cream maker’s direction, and add the bacon in the last minute of churning. Transfer ice cream to an airtight container and freeze a few hours before serving.