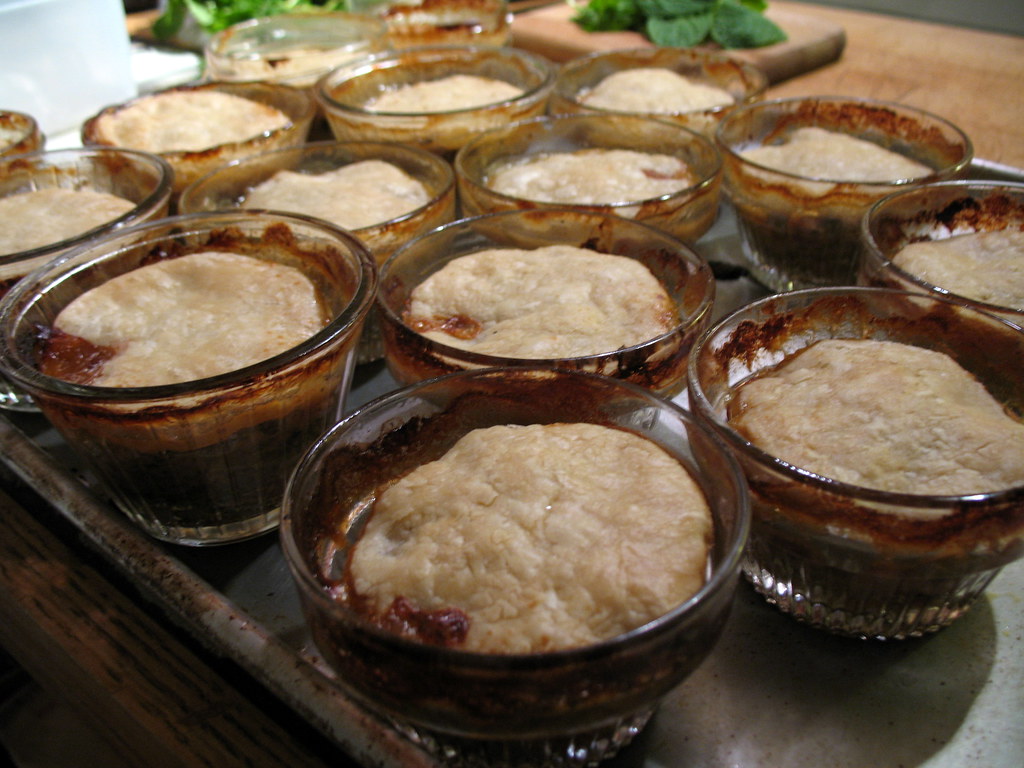 There were many things that blew my socks off at a dinner Sunday night, held in a cozy Brooklyn ground-floor apartment. The basil-ricotta gnocchi was one of them. The lamb pot pies (above) were definitely another. But the one thing that really struck me the most was when, while casually biting off chunks of his garlic sauce-smothered lamb breast and duck fat confit hors d’oeuvres, Tamarack Hollow Farm founder/farmer Mike Betit said, “The first two years [of starting his farm], I lost money. The third year, when I started selling at the NYC Greenmarket, I broke even.”


Holy cow (or lamb)! What in the world would make someone continue their work after such dire straits? Commitment. Passion. Principle. In a word, belief in humane, pasture-raised livestock and its subsequently delicious meats. To me this is a true example of the dedication, if reckless, of all the farmers who truck their goods in each week to the Greenmarket, and the strength of its support for small farms in return.

Before and during the four-course dinner that myself and twelve other New Yorkers enjoyed that night, Mike shared a few other tales of his trade. Between the lamb-based courses prepared by him and our talented chef-hostess, and the conversations about small farms and animal raising, the dinner was rich, meaty and oh so filling. Here are some of the things Mike had to say. 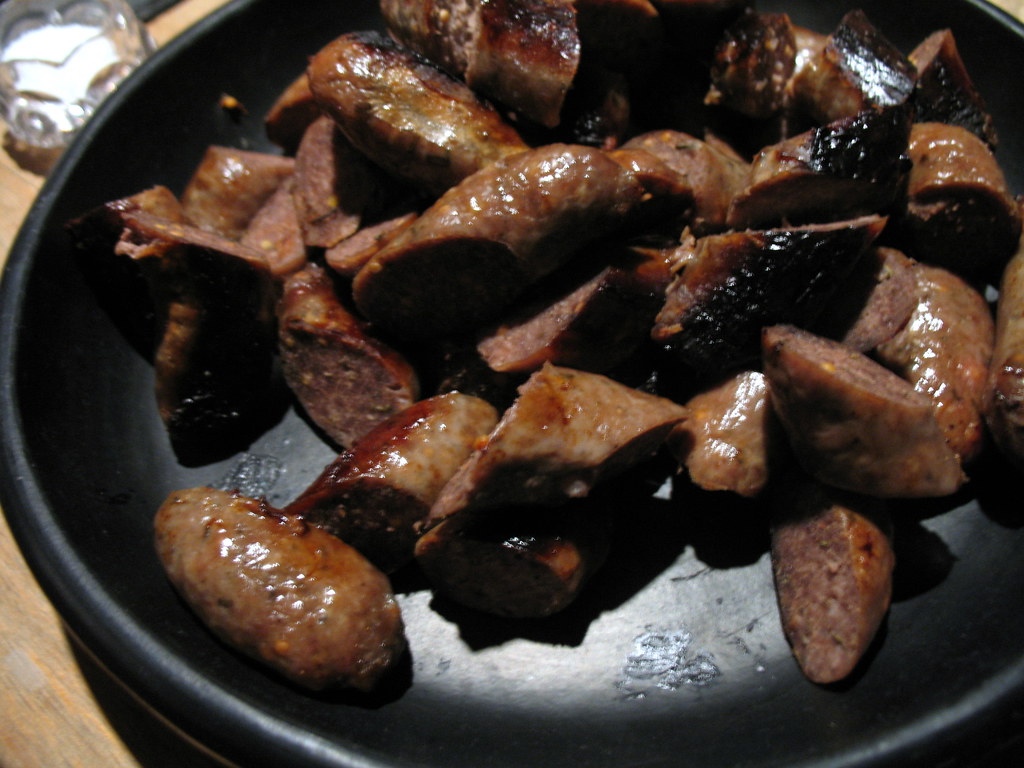 What’s in these delicious sausages?

Are there any more of these being sold at your Union Square Greenmarket stand?

No, these were a small run, and they’re all out. As with so many things [at the Greenmarket], investigation pays off. There are so many limited-run things from everyone.

Why does Tamarack Hollow Farm only sell on Wednesdays at Union Square? Why not at other Greenmarket locations, too?

Well, there are a lot of politics about who gets to sell at what market. But for better or for worse, I’ve purposely hung my hat on Wednesday at Union Square. I can cultivate a following of customers who always know I’m there then. 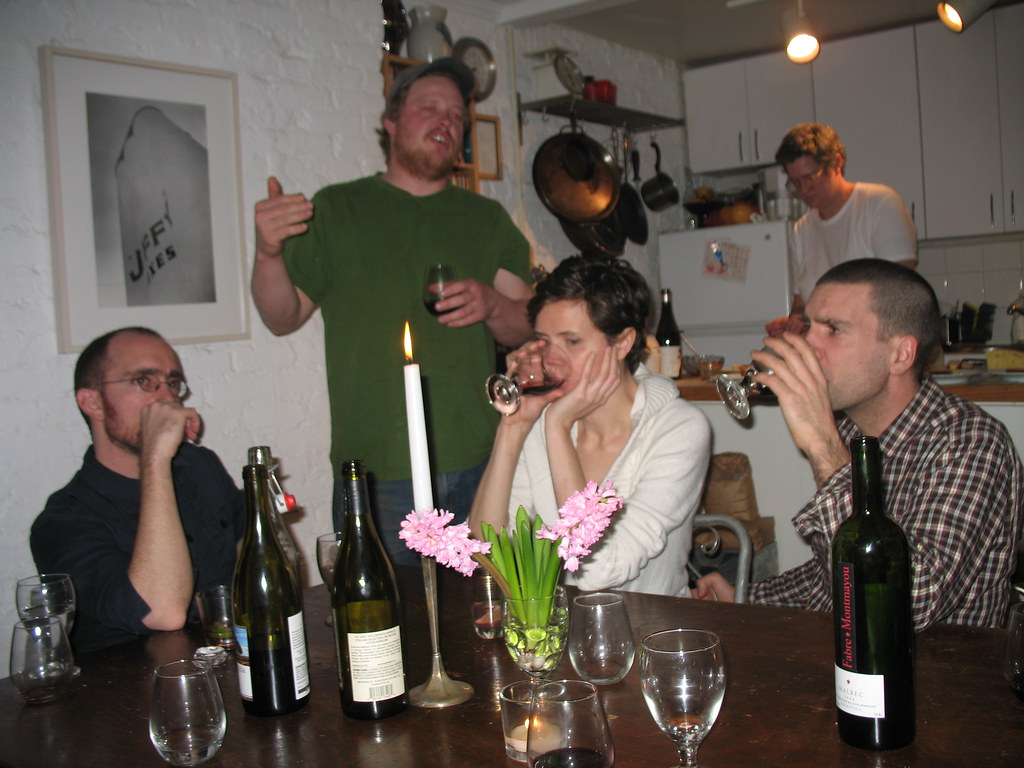 How long does it take you to drive to NYC each week from your home in Vermont?

When did you begin farming?

I started raising pigs in 2003. The first year, I lost about 8k, the second year, about 16k. The third year, when I began selling at the [NYC] Greenmarket, I broke even.

Do you also sell locally, around Vermont?

Yes, I’ve always sold there, but there’s less demand for the type of meat I produce than in NYC.

What did you do before you became a farmer?

I taught. I was a field guide at an alternative school for at-risk youth. I was “Outdoor Mike.” 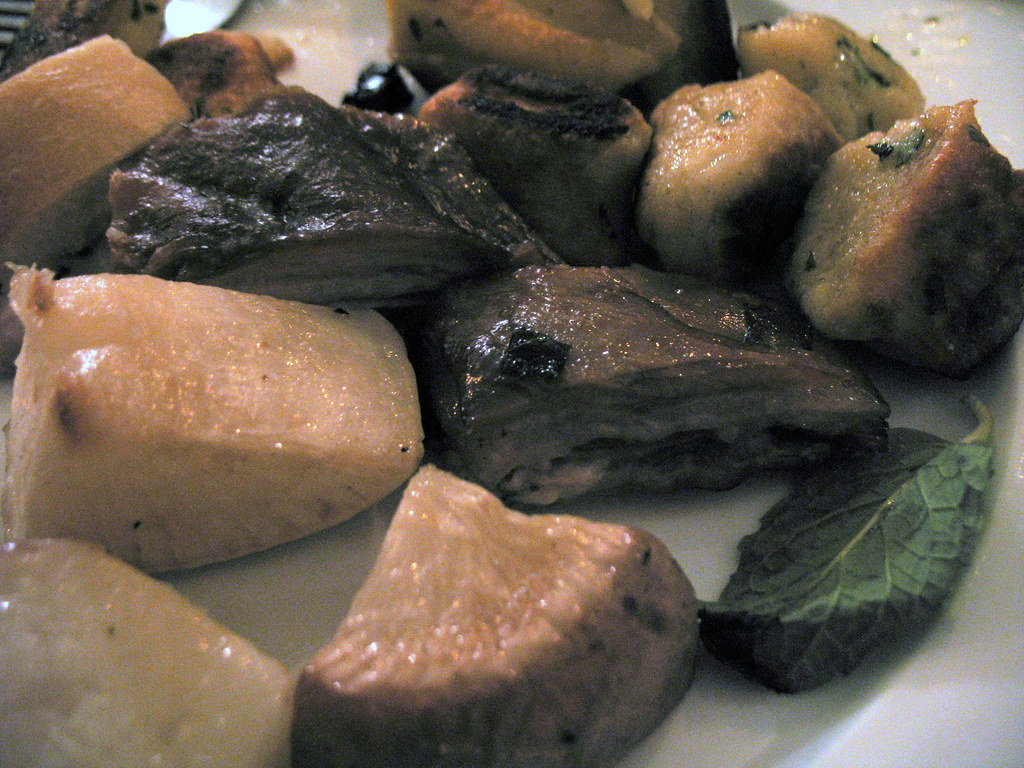 twice-cooked lamb breast (aka belly) with turnips and basil ricotta gnocchi. According to Mike, lamb breast is on the rise to becoming the new “in” cut

What animals do you currently raise?

Aside from sheep and pigs, I raise ducks, turkeys and geese. [After some table conversation about Berkshire pork and other heritage animal breeds]… Breed has less to do with the resulting meat than the production practices. Ten years ago, Berkshire pork was a nonexistent market condition. Now it’s a selling point, but you can produce Berkshire pork just the same way as the rest of [today’s industrial, factory-like farmed] pork is, and come out with the same kind of quality. The way I see it, management comes first; breed is second. I really think if you manage the breed well, that will affect your product the most.

What else have you got on the horizon for Tamarack Hollow Farm?

We’re adding veal this year to our offerings, and eggs. We’ve got eggs that have yolks so dense it’s like tapioca. It’s almost dark red.

Now that is one good egg.

Tamarack Hollow Farms-related posts:
Where To Get Your Gobble Gobble
Who Took the s’MACdown Crown?
Pommes de Porc Cassoulet