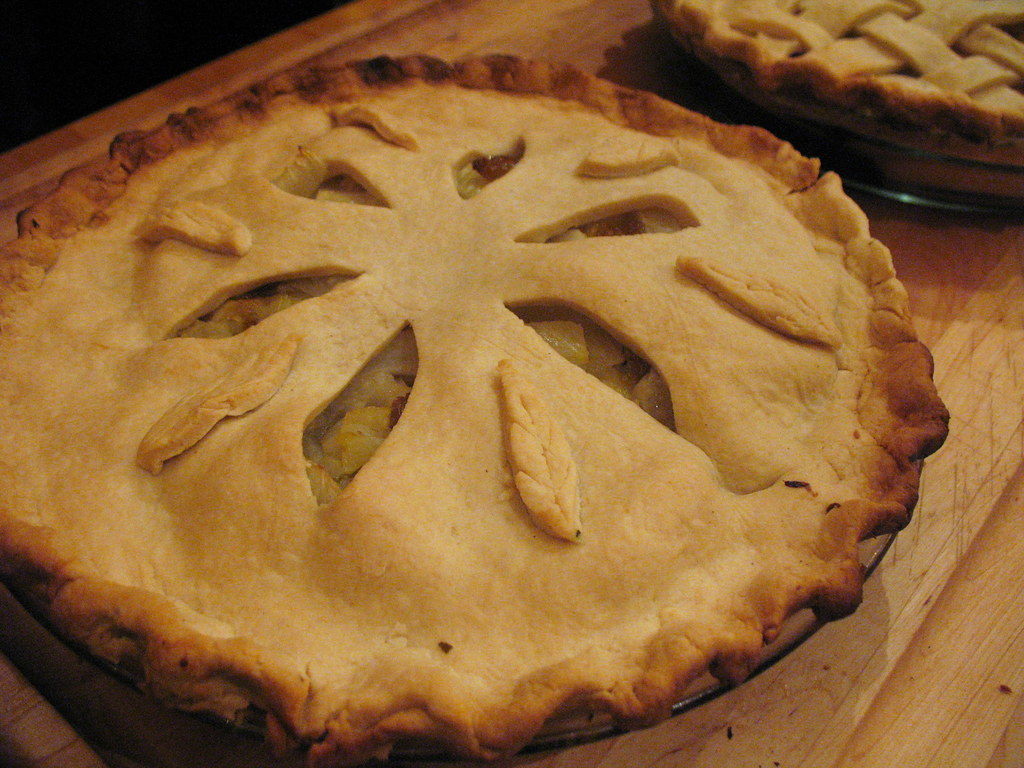 Really, now? Fennel pie? Are you going to eat (and cook) that? I asked myself these same things, too. And while I was making this pie, at the Photojojo Food Photo Safari on Sunday, I heard many similar concerns from lookers-on. (I told you winter was a tricky time of year for finding seasonal pie fillings!) But, the great thing about cooking, especially in the name of fun with friends, is that nothing worse than a pile of dog’s dinner will result in a failed effort. I therefore gleefully submit to the anti-theory of “Why not?”


For those who came to the Photojojo Safari, it was a novel experience for us all, and I hardly know how to describe what happened in writing. It’s true I helped organize the event, but even as the first few guests began to filter in, I really had no idea what to expect. There were food photography tips hanging from the ceiling rafters, there was a bar where Mayur Subbarao served as mixologist for the night, shaking up a flaming cocktail and shaving perfect blocks of ice. There were food demonstrations on picturesque preparations, like Nora Sherman and her father’s favorite apple strudel, Kara of Ted & Amy’s Supperclub sweet and savory pumpkin ravioli, chef Akiko Moorman’s Activa-bonded rainbow rolls and two-layer Japanese jelly desserts, and Michael of A Razor, A Shiny Knife and Mark of Whisk & Ladle‘s mouthwatering steaks, squid ink pasta with seabass and crispy oven-fried kale being churned out all under the same roof and often at the same times. A feast for the lenses as well as the senses, we hoped. 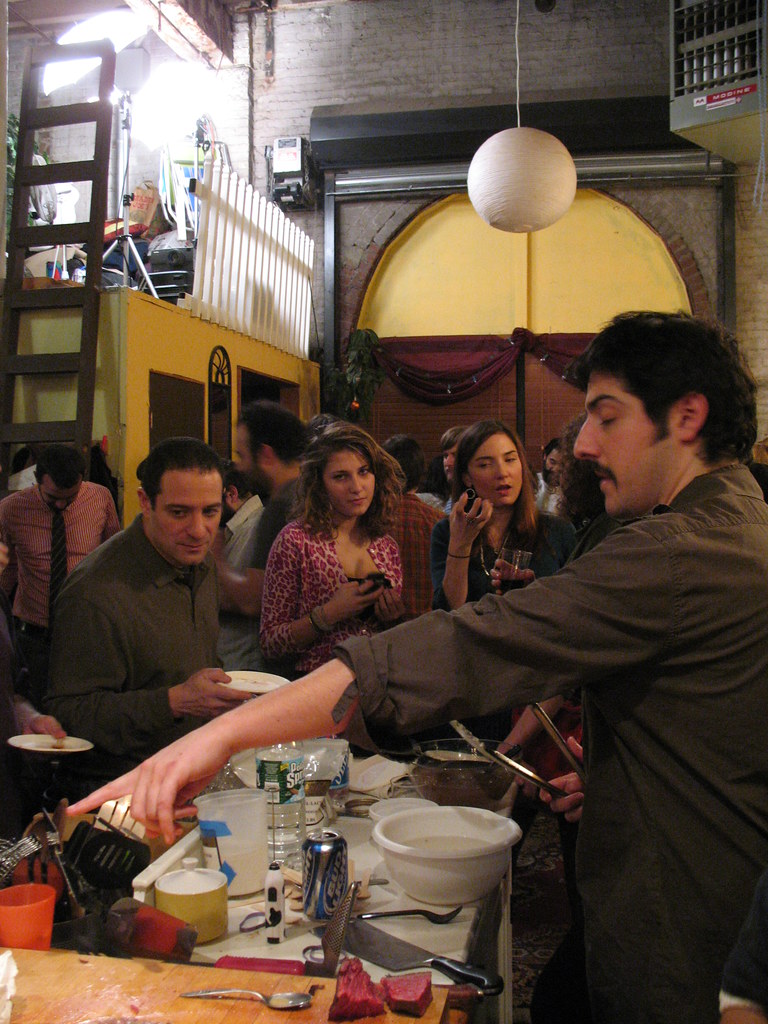 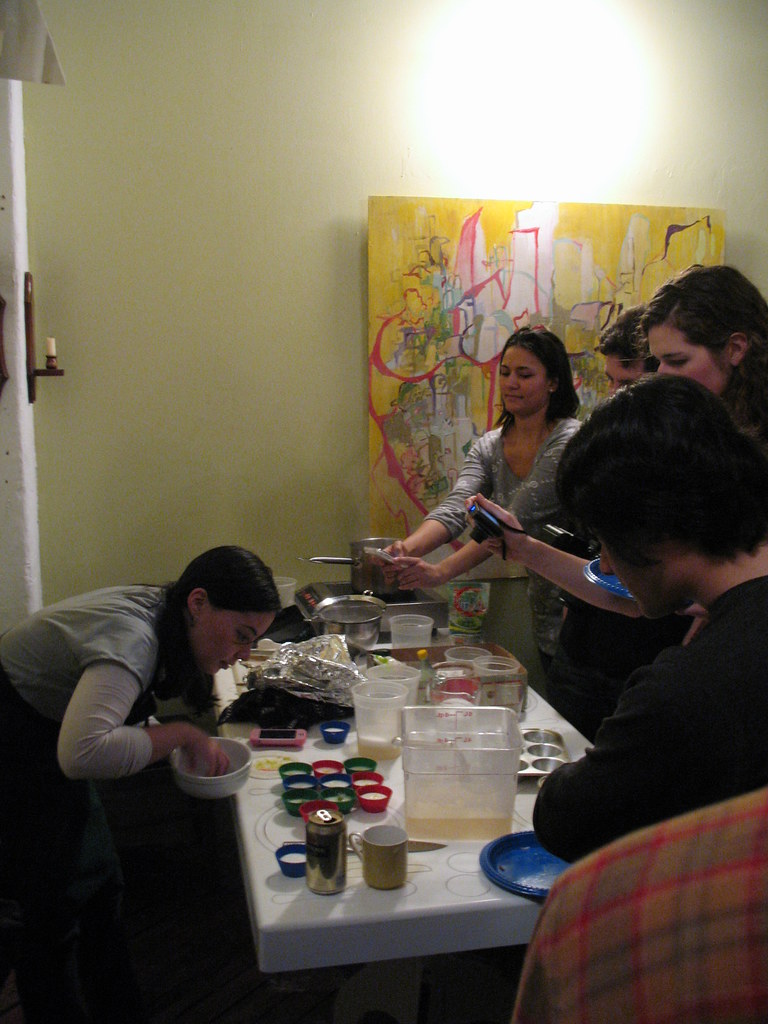 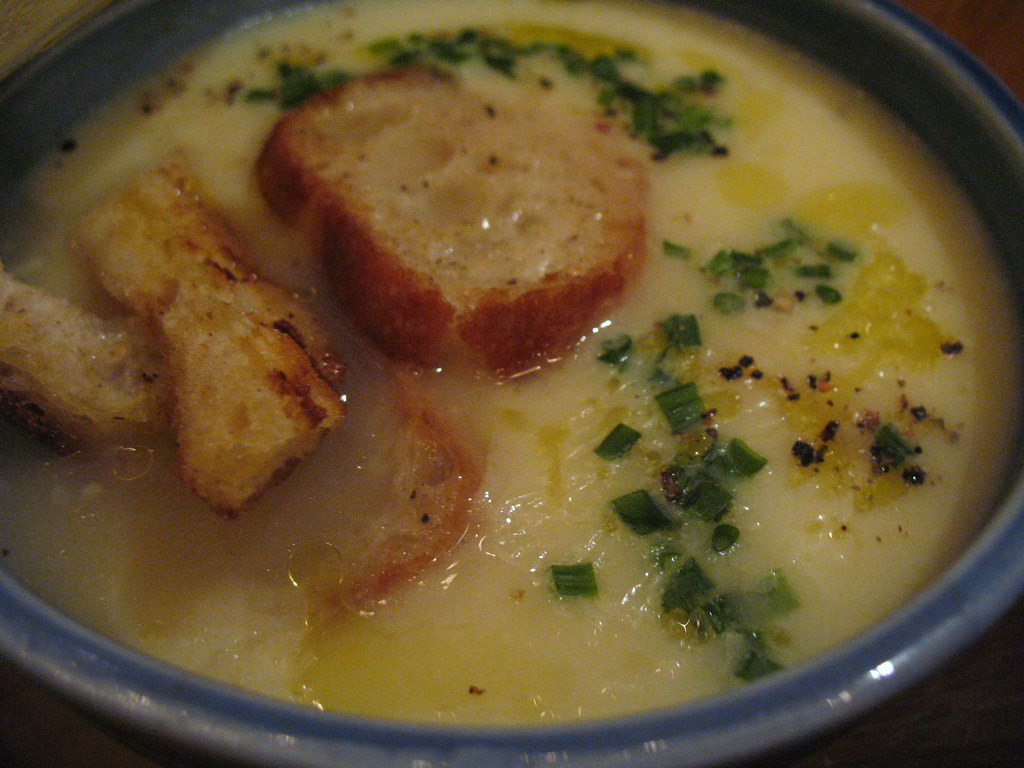 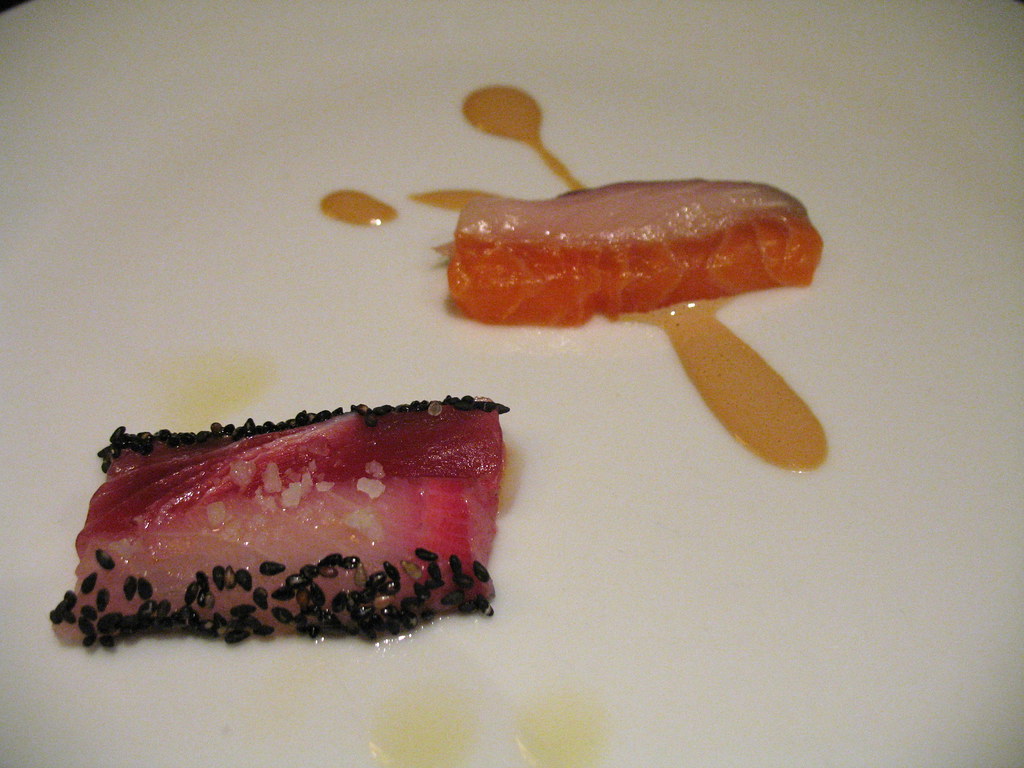 “meat-glued” tuna, salmon and mackerel with black sesame and a yuzu-based sauce 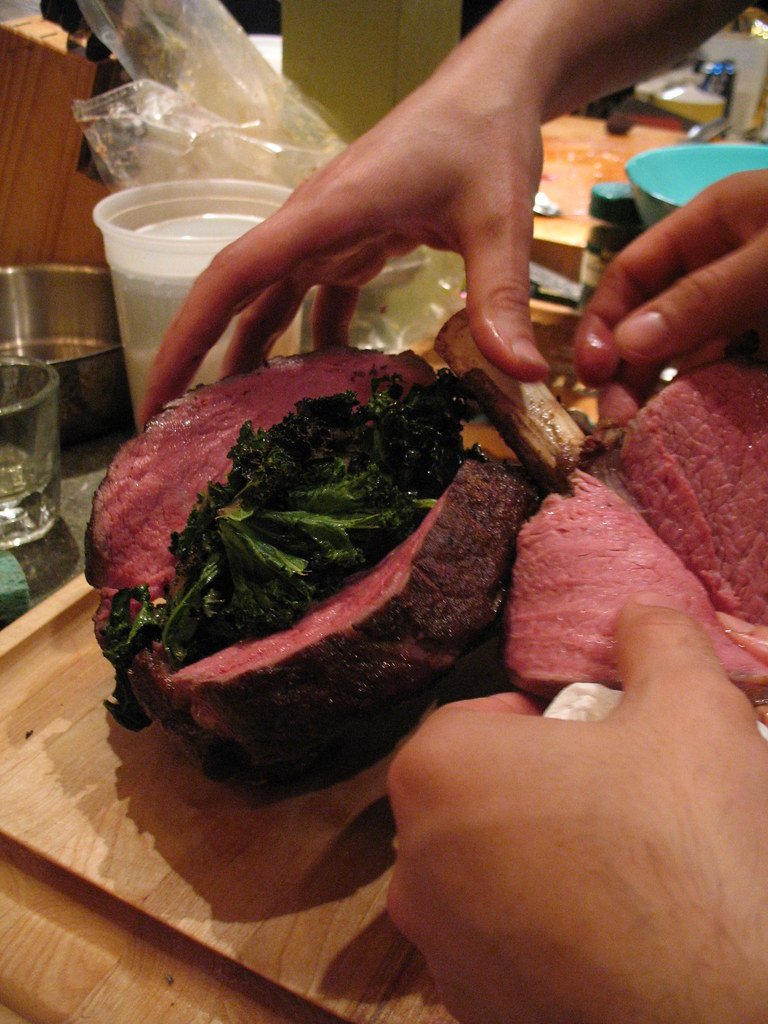 stuffing a steak with kale for the photo op

That’s the short version of it, but for the real story there’s a Flickr photo pool of uploads from folks who attended. There were also cook-participants who didn’t prepare their dishes on site but brought along beautiful treats: Emily C., Yoko Nitta and Melissa Sands can be thanked for those choice bites. It has been too long since I’ve seen this many talented, fun and endlessly creative members of the Brooklyn cooking underground in the same place at once. Thanks to the fine folks at Photojojo for putting it together.

So where was I with this pie? Fennel! Not the spice, but the bulb, chopped in small chunks and quickly sauteed with butter, golden raisins and savory spices. This was the third pie I thought to make for my demonstration; the other two were a fresh pineapple pie and a more traditional, crowd-pleasing apple cranberry pie. The demo was based on top crust decorations, so for the apple cranberry I gave it an unconventional pentagram lattice weave; the pineapple got a pineapple-shaped center cut-out with droplet-shaped cut-outs around; and the fennel pie, my favorite leaf design with the cut-out pieces of pastry applied on top in between the slits. I ran the tip of a knife across the top of these pieces to create a leaf-like texture, as well. Easy as pie! 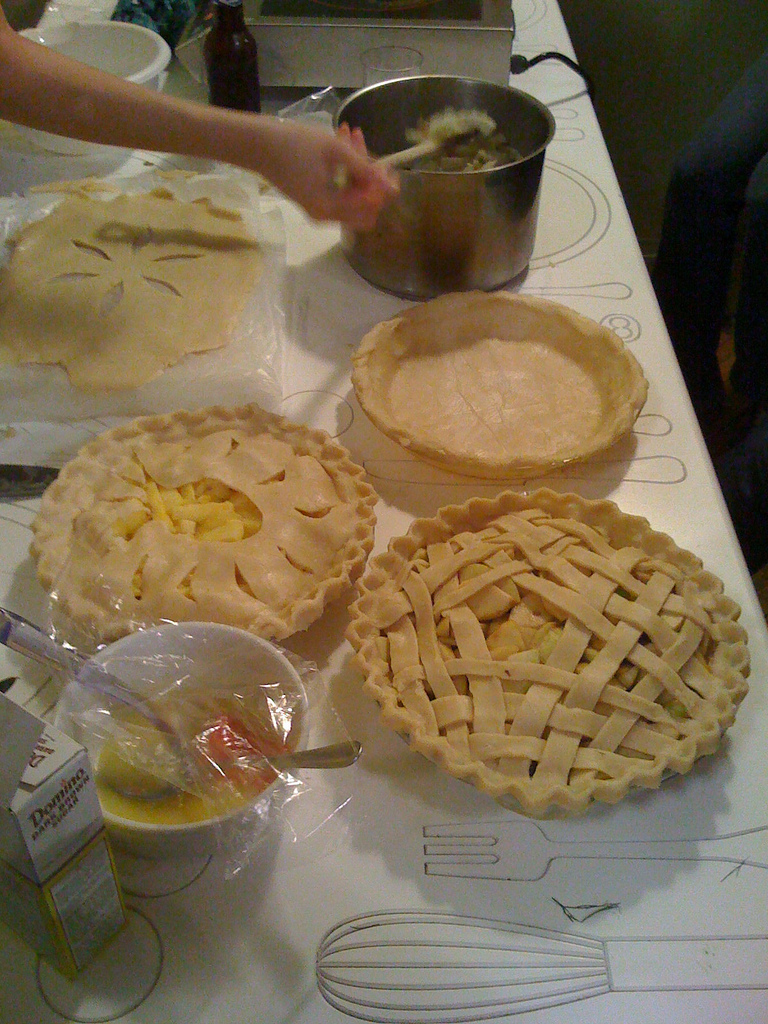 Truth be told, I liked the fresh pineapple one the best. Once the tough skin was hacked off, all those juicy yellow cubes needed was a scoop of sugar and squeeze of lemon along with cornstarch to make sure the juices wouldn’t run wild and thin as they baked. But as I walked around the room at the party, and continue to hear comments in the aftermath, I’m told by many that the fennel pie was “amazing.” Myself and a notable guest at the event, the food writer Joe DiStefano, both thought it could have used “something.” So the recipe below is the version I would have made, had I been closer to the kitchen and could grab spices as I cooked at the time.

Anise, raisins, warm coriander and cumin: is it sweet or is it savory in the end? I’m not sure it fits into either category. But as long as it’s thought to taste good — and look photo-worthy — I’ll stand by my pie with pride.

Make the crust: Combine the flour and salt. Using a pastry blender, your fingers or a food processor, cut the butter into the flour. If using the food processor, pulse several few times until the pieces of butter are no larger than a pea. The mixture should resemble coarse crumbs. Add water one tablespoon at a time and stop when the dough is malleable enough to form a ball. (If using food processor, slowly add water one tablespoon at a time to the mixture while pulsing it just until a ball is formed). Break into two balls. Cover them with plastic wrap and chill at least 30 minutes. (Crust can be made several hours beforehand.) It’s important to make sure dough remains cold while you work with it and ideally before it goes into the oven, so keep refrigerated until you need to use it.

Chop fennel into 1-2 inch pieces. Heat butter over medium-high in a medium saucepan. Add shallots, fennel, golden raisins and spices and cook, stirring occasionally, until lightly softened, about 7-8 minutes. Remove from heat while you roll out the dough. Add lemon juices once it has cooled a bit, and stir to combine. Taste for seasoning.

Preheat oven to 375 degrees. Roll out both balls of dough into evenly thick, roughly 10 inch rounds on cutting boards or waxed paper. Place one into the bottom of the pan and pat in. Add the fennel filling. With the top crust, cut out shapes in the dough in whichever fashion if desired. Otherwise, simply peel dough carefully off its surface and arrange on top of the pie. Even the dough around the edges, and crimp with fingers to seal. Bake for about 35 minutes or until lightly golden on top. Let cool at least 10 minutes before serving.

Cost Calculator
(for one 9″ pie)

Seven brownie points: Pies, as long as you’re keeping the crust, without which it really couldn’t be called a pie, just don’t get much lighter than this. There’s no added sugar to speak of, just the natural ones found in the fennel and raisins, and there’s a light touch of salt. It’s a very mild, subtle-tasting pie as a result, but hopefully refreshing. And the main ingredient, fennel, is high in Vitamin C and fiber.

Six brownie points: Fennel is just about retired from the fall harvest around this time of the year, but stalks can still be stalked at some Greenmarket tables. It’s a great comeback story that the once unpopular veggie has been so embraced in recent years; the more demand, the more small farmers grow it. Let’s keep the momentum going here.