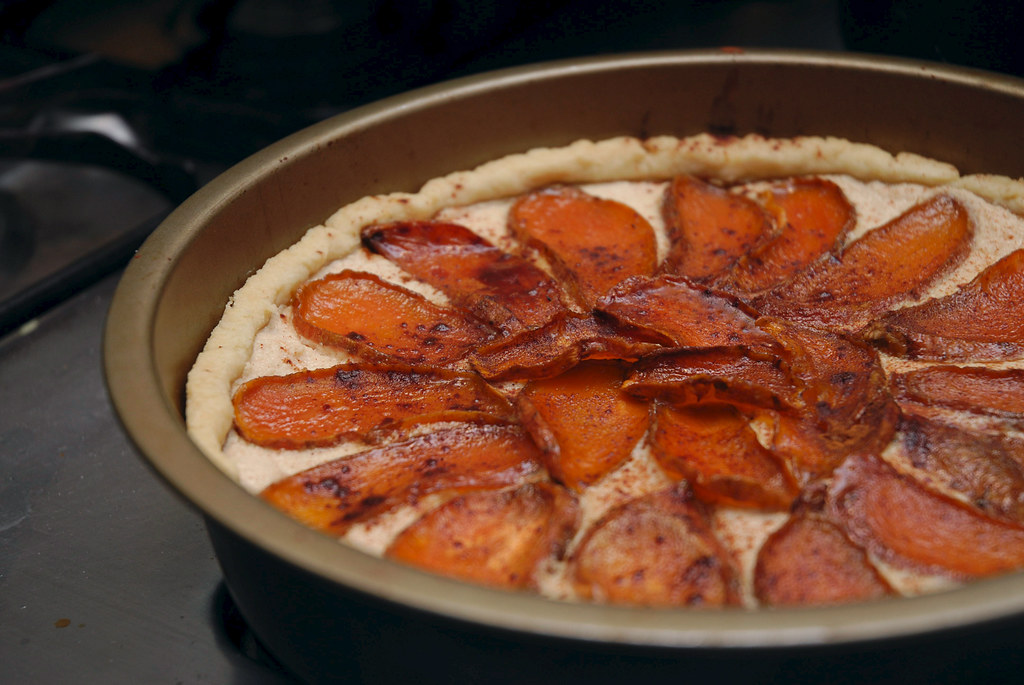 Happy holidays, food lovers. I hope everyone’s had their fill of celebratory treats both sweet and savory. No? Well, there’s another holiday coming up in a few days, the eclipse of 2008, but that one’s less about food (or holiness) than drink. Perhaps you, like I, are still looking forward to serious snacking on New Year’s Eve, but sense that you’ve maxed out on your monthly caloric intake. Instead of leftover fruitcake, this healthy sweet potato tart might appeal to both dueling persuasions.


It’s hard to imagine that as a child I detested sweet potatoes. The first time I had one, I was expecting it to taste like a normal potato — earthy and delicately savory. To my shock, it tasted more or less like a cooked carrot, and that was something else I couldn’t stand. Nowadays, I’ll eat both carrots and sweet potatoes cooked in any way, shape or form. But I can’t fathom not liking sweet potatoes as a little kid if they were thinly sliced, glazed with brown sugar, and roasted to caramelized, crispy-chewy little chips like the topping of this tart.

Versatility is a virtue of both sweet potatoes and ricotta cheese. I love baking ricotta as an alternative to rich, eggy tart fillings, and it’s so much easier than carefully cooking yolks whisked with cream or milk to boot. All I had to do to create the filling of this tart was dump a carton of whole milk ricotta (lowfat if you like) into a bowl and mix in some sugar and spices like cinnamon, nutmeg and ground ginger. Into a pan lined with a basic shortbread bottom crust it went, and on top of it a fan of said roasted sweet potato slices. Once out of the oven, the ricotta was solidified but still soft, and the sweet potatoes were uniquely aromatic, tinged with the warm holiday spices. 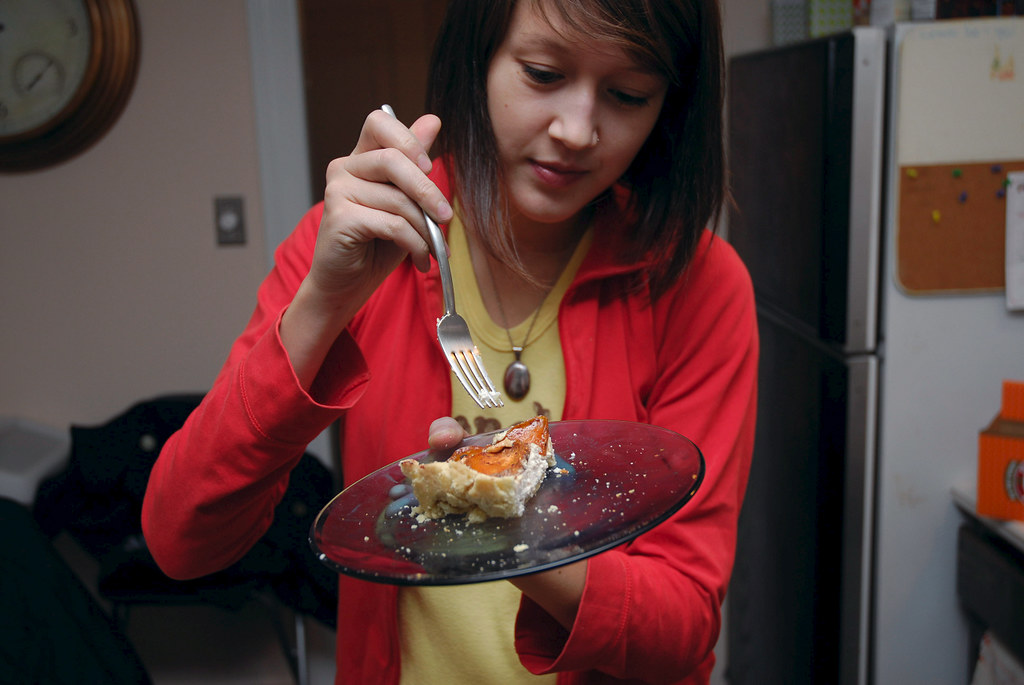 Was it the best dessert I’ve ever tasted in my life? No, as an ice cream fanatic, I would probably say not. Was it eye-catching and appealing to my friends at the time who were simply looking forward to “dessert”? Indeed. We ate it up. And afterward, I didn’t have as bad of a glutton guilt hanging on my conscience.

One of my friends couldn’t guess what the orange slices on top of the tart actually were. The secret to this was using “baby” sweet potatoes, which are sold by the 2-3-pound bagful at the Greenmarket in Brooklyn’s Grand Army Plaza all fall. The unusually small shape gave way to roughly three-inch ovals. (His first guess was that they were mangoes; next, papaya.) If you can’t get a hold of this diminutive version of the tubers, slicing them into thin rounds along the width, rather than length, would also produce arrange-worthy pieces to top the pie, with some overlap. Just make sure you have a good, sharp knife and are careful with it, though — sweet potatoes are much denser and sturdier than their pale cousins. 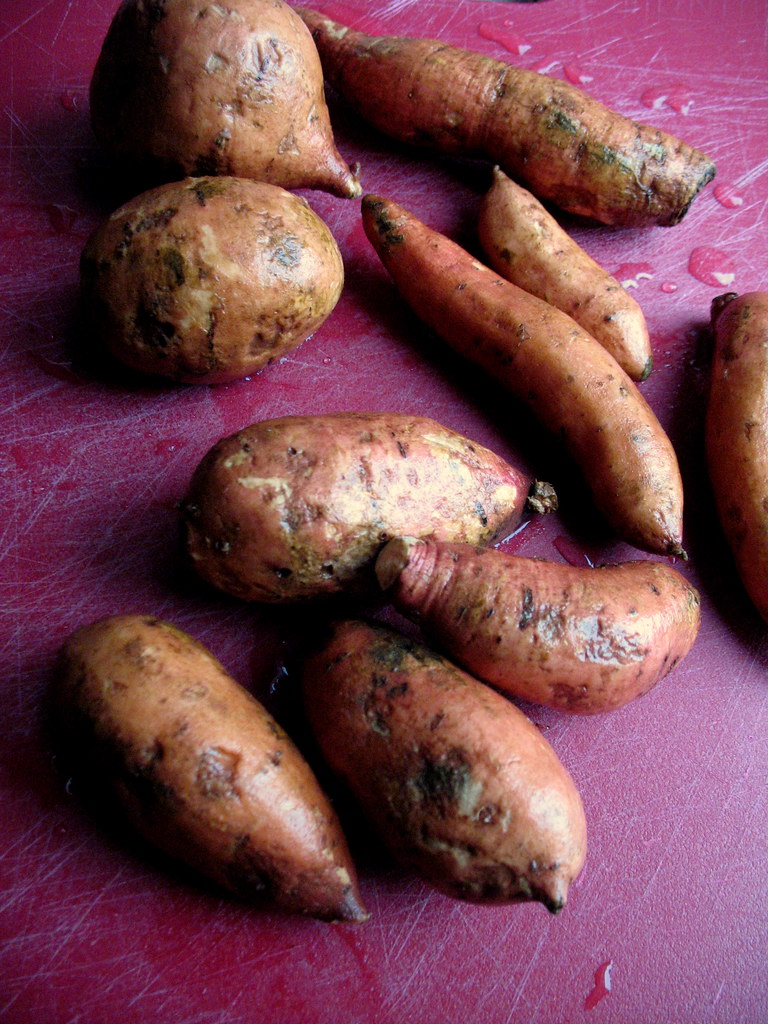 Last but not least, with most types of pies and tarts, there’s always that inclination to top it with ice cream or whipped cream. But because of the hearty portion of sweetened ricotta in this one, I just don’t get the sense that either of these additional dollops of creaminess would “go” very well. Works for me and my post-holiday diet! Here’s hoping that this one actually lasts a while.

Major thanks to the incredible talents of Albert, who attended the dinner party this dessert was served at and snapped the photo at top of the cooling tart, and the one below of me tearing into a slice.

Make the bottom crust: Combine the flour, sugar and salt. Cut the butter into small cubes and cut into the flour mixture using a pastry cutter, a food processor or your hands until the mixture resembles coarse crumbs no larger than a pea. Add the egg yolk and a tablespoon of water at a time until the mixture just comes together to form a ball. Wrap in plastic wrap and refrigerate for 30 minutes. Once chilled, roll out dough and turn into the bottom of a 9″ pie pan. Keep refrigerated while you prepare the rest of the ingredients.

Preheat oven to 375 degrees. Spread sweet potato slices on a baking sheet and toss with the brown sugar and oil with your hands until evenly coated. Arrange in a single layer on the pan, and bake for about 15 minutes, or until lightly caramelized around the edges. Remove from pan and let cool.

In a large bowl, combine the ricotta, granulated sugar, vanilla and spices. Pour mixture into the bottom of the pan with the bottom crust. Arrange the sweet potato slices on top. Sprinkle with additional cinnamon (optional). Bake at 375 degrees for about 35-40 minutes. Let cool at least 10 minutes before serving.

Cost Calculator
(for one 9-inch tart)

Four brownie points: At the cost of their natural extra sugars, sweet potatoes provide one of the densest concentrations of nutrients known to tubers: Vitamin A, Vitamin C, fiber, iron, calcium and even protein among them. Add ricotta to that and you’ll have even more calcium, along with some not-so-great saturated fat. I haven’t tried making this with skim or lowfat ricotta rather than whole milk, so can’t guarantee a perfectly similar outcome. But I wouldn’t be surprised if it wasn’t too far off.

Seven maple leaves: Sweet potatoes are in season all through winter. So is dairy, and eggs. I have a hard time coming up with pies this time of the year that don’t have apples or pears, so be on the lookout for the next unexpecting root vegetable dessert!