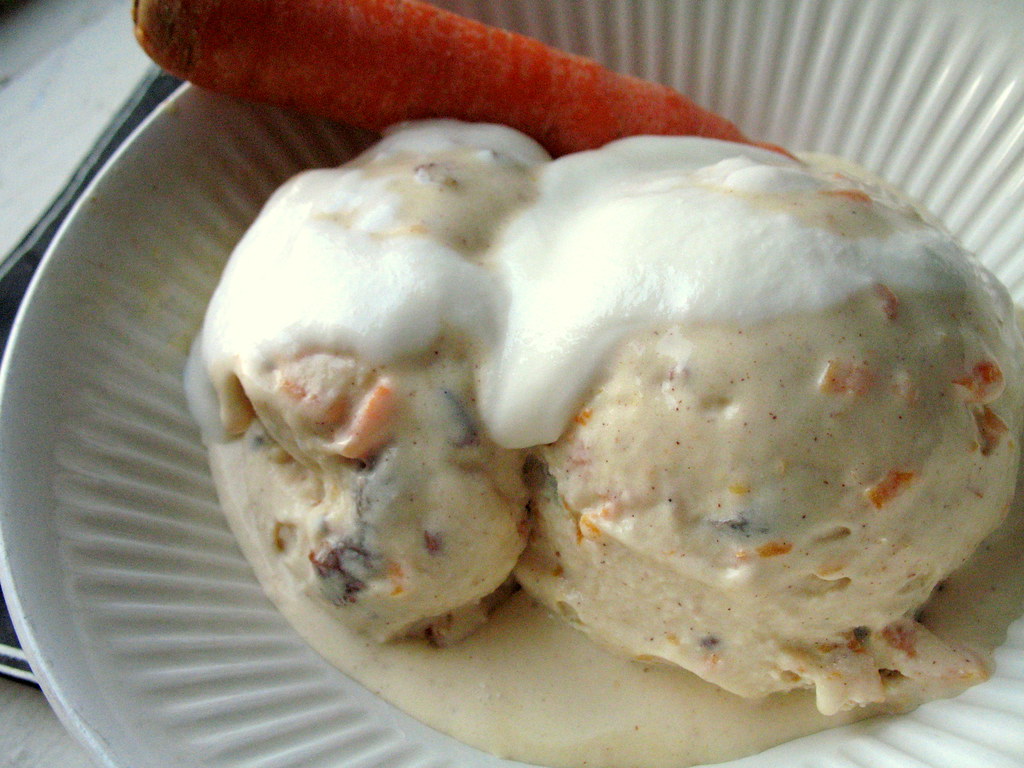 Sometimes, words don’t even come close. Sometimes photos don’t do the trick. Sometimes, like when dealing with something as delicious as this ice cream, there is no proper justice. But I will try. 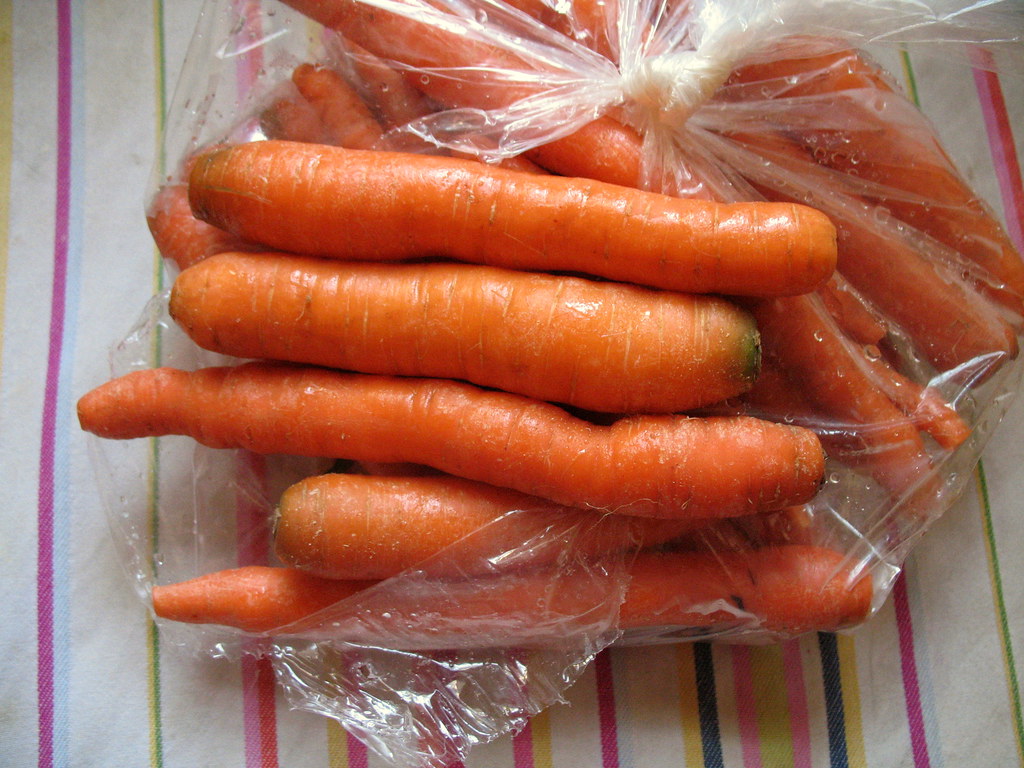 It started with this big ‘ol bag of carrots. Last week I got a load of tomatoes at the Greenmarket. This Saturday, I made off like a happy wabbit. My snacking binges have gotten a little out of hand lately, so I thought these easy munchables would provide some buffer between me and the office vending machine. Only, the workweek hadn’t even started by the time I decided to turn the healthy veggies into minions of one of my most decadent desserts. 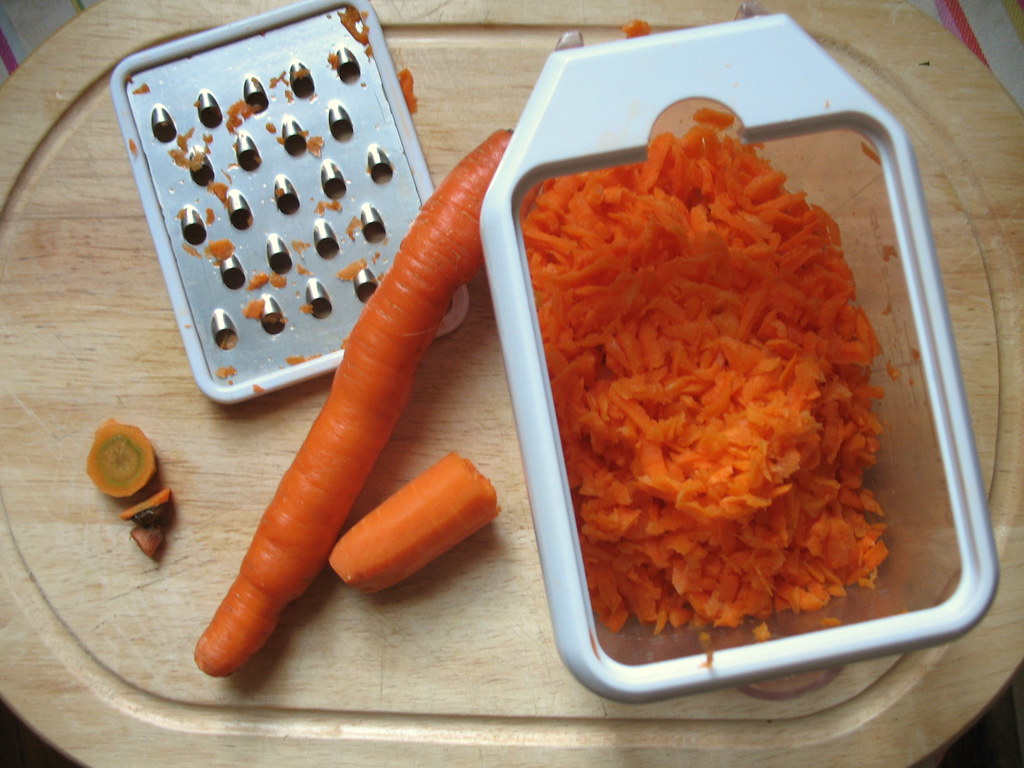 carrots zip through a grater 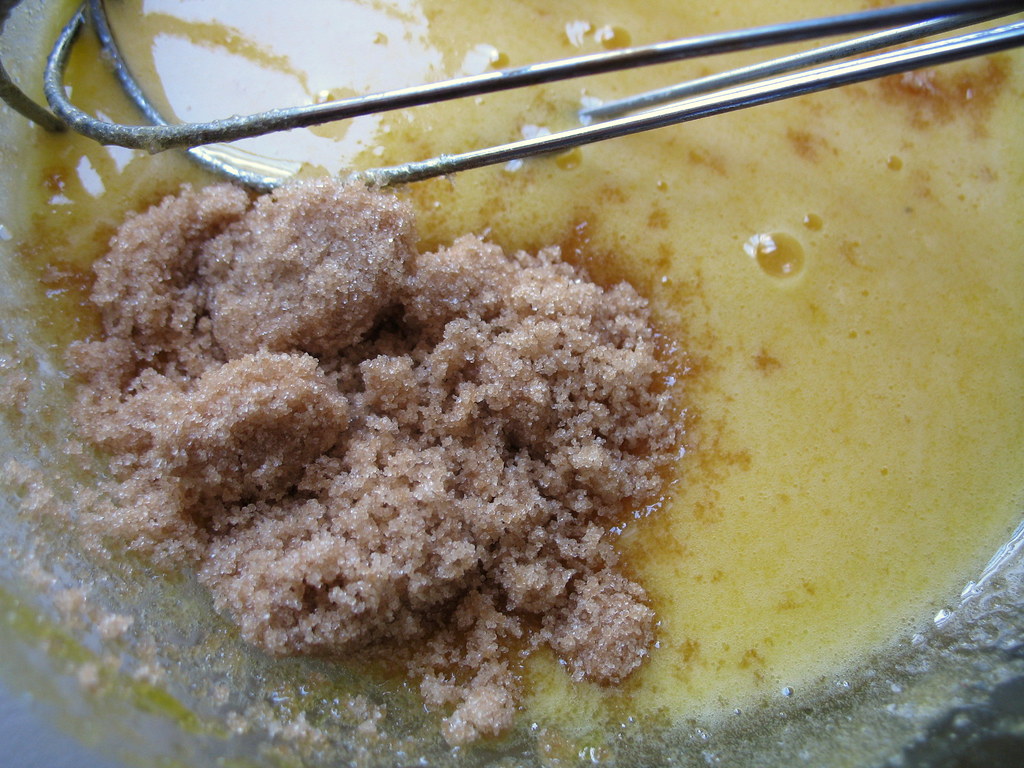 brown sugar adds a little density to the flavor’s sweetness

This recipe came out of one of those, I wish someone would do that moments. Make an ice cream fashioned after carrot cake, with chunks of chopped nuts and plump raisins, and top it with a sauce fashioned after cream cheese frosting. Why not? Unlike so many of these moments, this one had been followed by action. 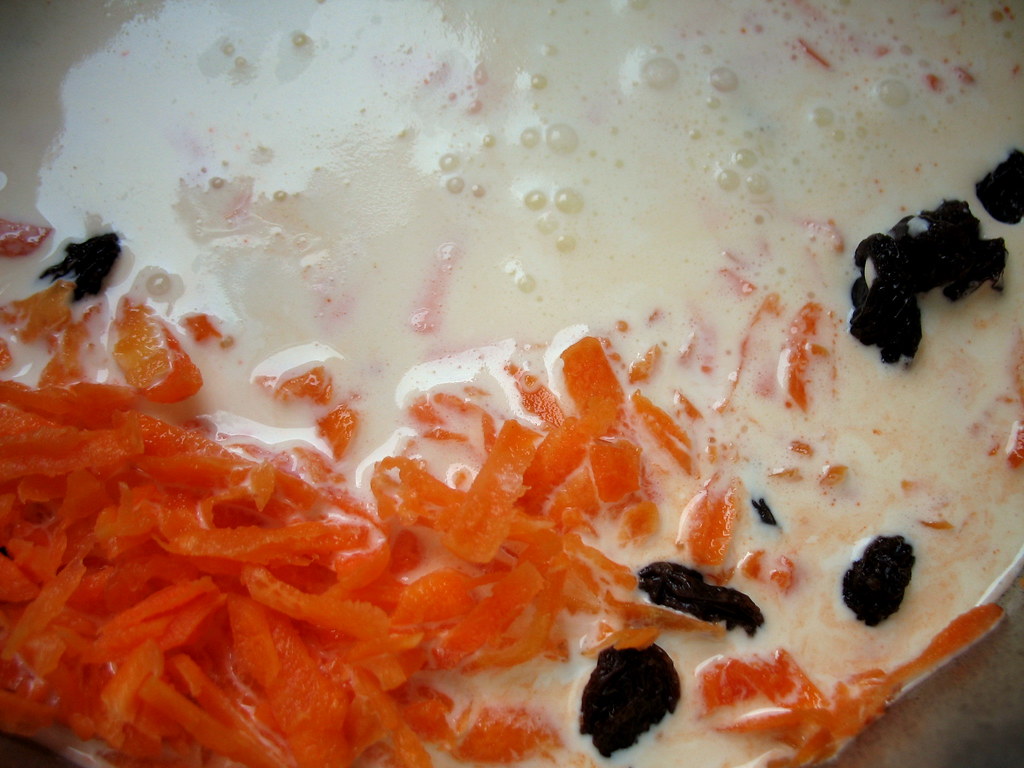 shredded carrot and raisins cook in cream until soft

These knobby, cute little carrots were so juicy and bright after shredding that they immediately seeped into the milk and cream even before it was heated. To soften them to that familiar stage we’re used to seeing in carrot cake, I let them simmer for about half an hour with the milk mixture, along with the raisins. By the time the ice cream was done, I think most of the smaller shreds completely blended in as mush; and the raisins had grown to fat, full balloons that were just breaking apart in the churning process. Only the pecan bits, tossed in at the last few churns, retained their original shape, and add a nice crunch to the cream. Maybe ice cream isn’t one of the most decadent desserts on the planet, but this one sure tasted up there. Something about the way the warm spices of cinnamon, nutmeg and ginger mix with velvety dairy is intoxicatingly good. I could smell it even while beating the spices up with the sugar and egg yolks, a haunting portent of an endless snacking session to come. 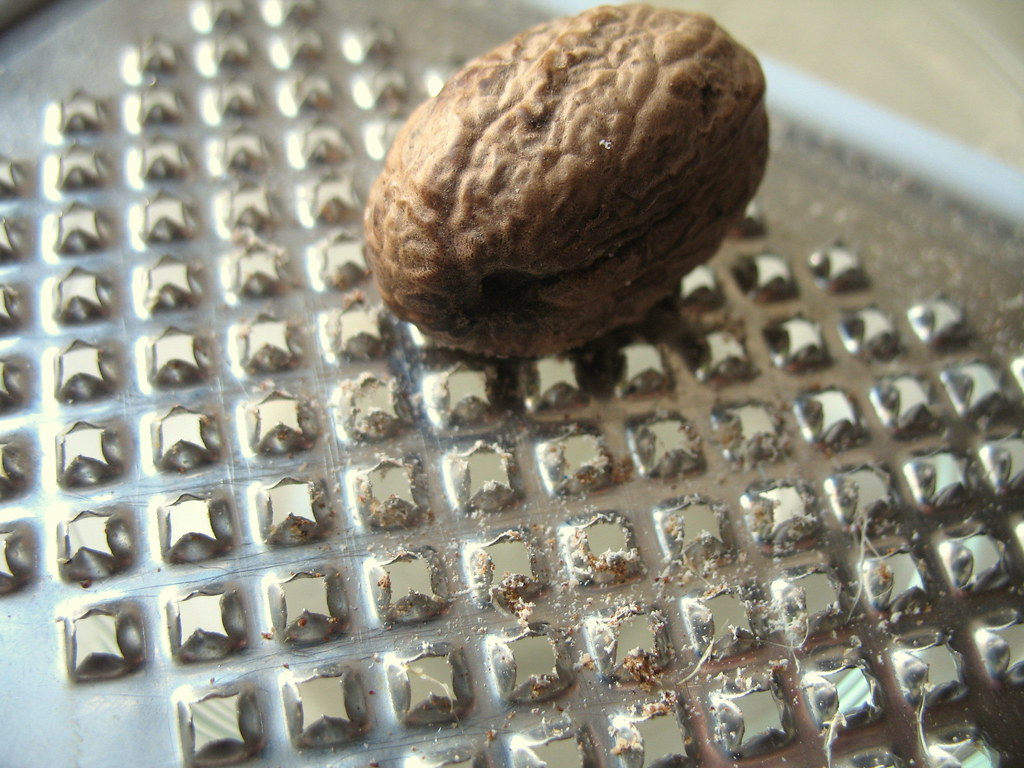 I’ve been watching the Olympics a lot lately, like many of you may have been, too. Gymnastics are my favorite. I find great satisfaction in seeing someone complete exactly what they know they’re capable of doing, all in one routine. The thought came over me while I was digging into this carton of ice cream and watching the Games, that here is one instance when everything I know about ice cream making came together perfectly. Beautifully. From letting the custard heat just long enough that it coated the back of a metal spoon, to not letting the ice cream churn too long, so that it turned slightly buttery, but taking it out right at that soft, almost soupy stage and letting it ripen to the right texture in the freezer (which was so not intuitive the first few times I made ice cream). I’d give the consistency of this ice cream’s base a perfect ten. (Although I took too long setting up the photo so it melted too much in the photo at top.) After all, the Olympic ice cream making scoring system can still use perfect tens in my dream world.

The only hurdle next is not eating so much that my stomach turns to complete flab. Nastia has great abs. You can see them through her leotard, that’s how great they are. 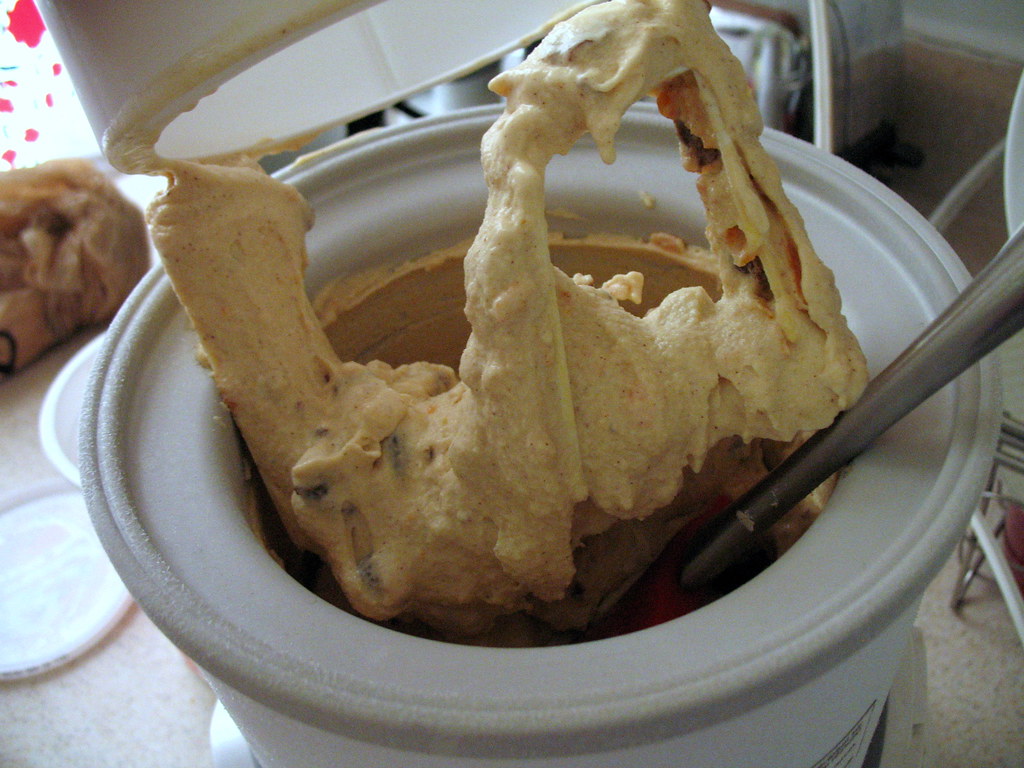 In a small bowl, beat the egg yolks with the sugars and spices until fluffy and the lighter in color. Set aside.

Combine the milk, cream, carrots and raisins in a medium saucepan. Bring mixture just to a boil, then reduce heat to very low. Let simmer, stirring occasionally, for 25 minutes. (Do not let boil.)

Let custard cool completely, then transfer to an airtight container and completely chill in the refrigerator at least 2 hours. Follow your machine’s instructions for churning length. Add the chopped nuts in the last minute of the churning process. Transfer ice cream to an airtight container and freeze for 2 hours to “ripen.” Serve with the cream cheese sauce (recipe below).

Beat all ingredients together in a bowl until smooth in consistency.

Seven brownie points: For all my bellyaching about binge ice cream eating, I must say there are some redeeming qualities about this one. Not that it’s ever good to go overboard, but there have been worse ice creams to do so with. Although I followed the rules toward making a decidedly rich, creamy base with the amount of egg yolks used, I thought it would be somewhat necessary given juices from carrot blending into it. But those juices add a bit of Vitamin A, and the raisins, a tiny dose of immune-building antioxidants. Of course where milk is concerned there’s plenty of calcium. But ice cream is also where plenty of sugar and cholesterol is concerned.

Five maple leaves: The Greenmarket gets the win for the carrots. But for much of the other ingredients, it’s a tie. I had to run out and grab some more eggs, along with cream, so I was able to get cage-free eggs but only generic cream. As for raisins, it seems like they’re only made in California. I could be wrong, but manufacturers certainly like to advertise them as such.