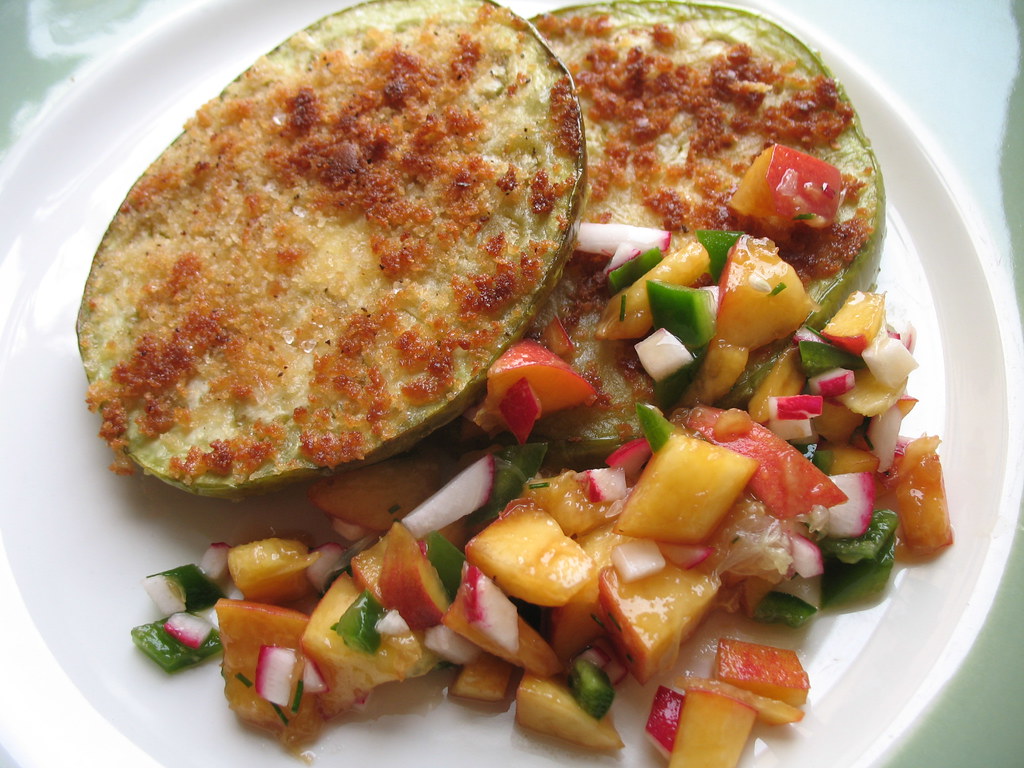 This weekend, I had the pleasure of running into not one but two different old roommates of mine, whom I haven’t seen in ages and didn’t even realize lived in the city in one case. I know these women intimately, but for some stupid reason have fallen out of touch with them over the years. Now, we didn’t romp around in flour, or kill our abusive husbands with frying pans like the protagonists in Fried Green Tomatoes. But I was feeling nostalgic for those times all the same, and knew just the recipe I wanted to try out for the first time today. Except for one little ingredient switch.


On Saturday, the Grand Army Plaza Greenmarket “smelled like peaches” as a friend put it. I think 75% of the farmers were selling peaches, to my astoundment. I’m not one to be left out of the fun, and with bounty like that, my mind started buzzing with all the different things to do with them. (Although a fresh peach pie can never go wrong.) 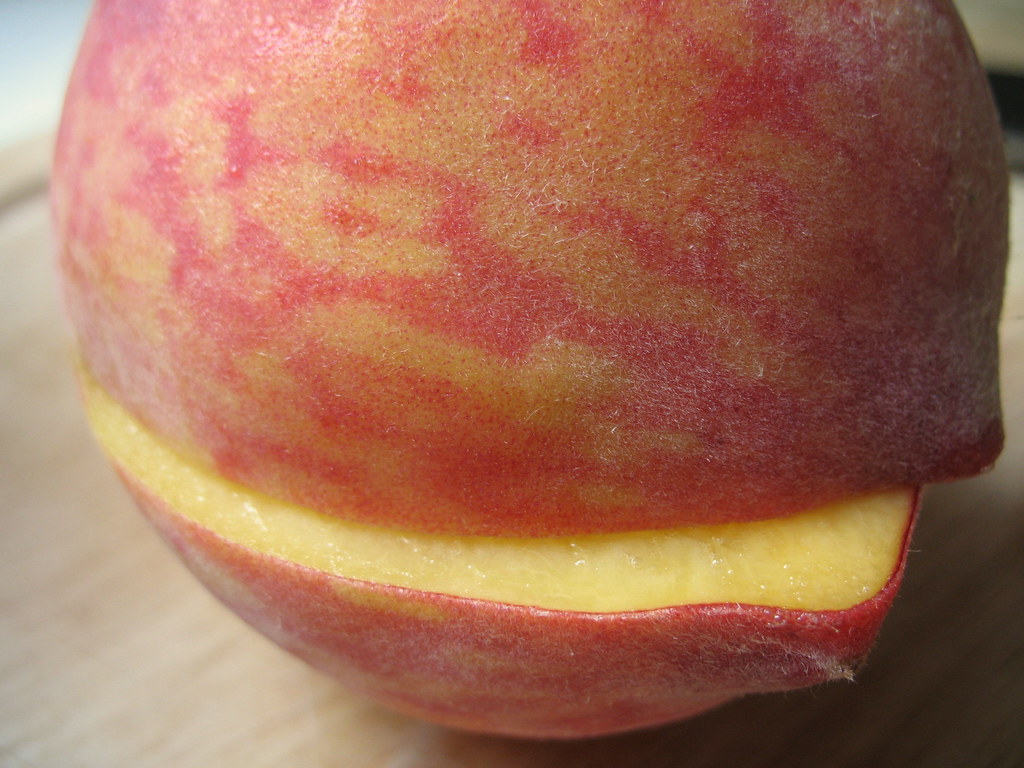 I was also surprised to see eggplants there already, and in so much variety. I swear the shades they come in multiply every year: last summer I discovered the luminous, moon-white eggplants. This time, I found a pretty, spring green-colored one. I wouldn’t be surprised to see cherry red ones appear next. Since this one so resembled a green, firm tomato, I decided to slice it in rounds and cook in the manner of the Jessica Tandy film. 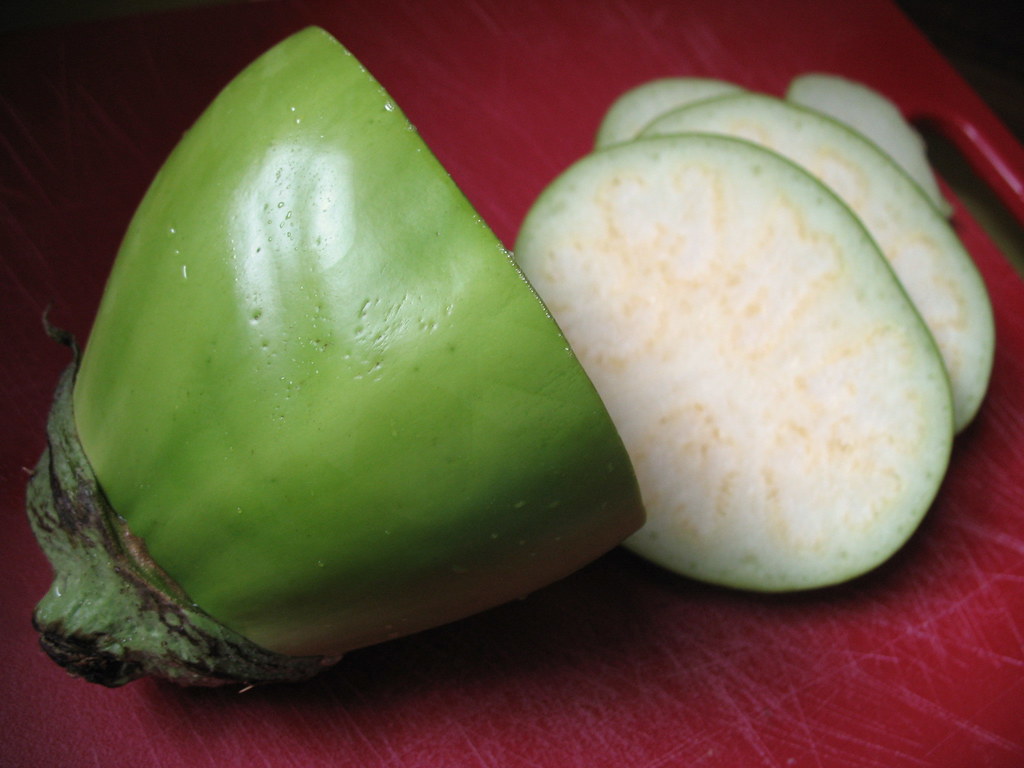 I’m convinced that a crispy, hard crust surrounding a custard-soft, warm center is the best way to experience an eggplant. I made a stir-fry with another, purple eggplant recently. It was slimy, maybe a little over-cooked, and soaked in the garlic and black bean sauce of the dish. Overall, pleasant. But this batter-fried, peach salsa-topped dish really had me from bite one. Using coarse breadcrumbs (instead of cornmeal, as some recipes recommend) and egg for dredging, and olive oil (instead of bacon drippings, again as some recipes advise) for frying, this not-so-southern side dish was produced. I considered making a smooth, chilled peach sauce to go with it, but after seeing how pretty the diced peaches looked, I instead combined them with some seeded jalapenos, radishes, chives and lime juice for this chunky, refreshing salsa topping. 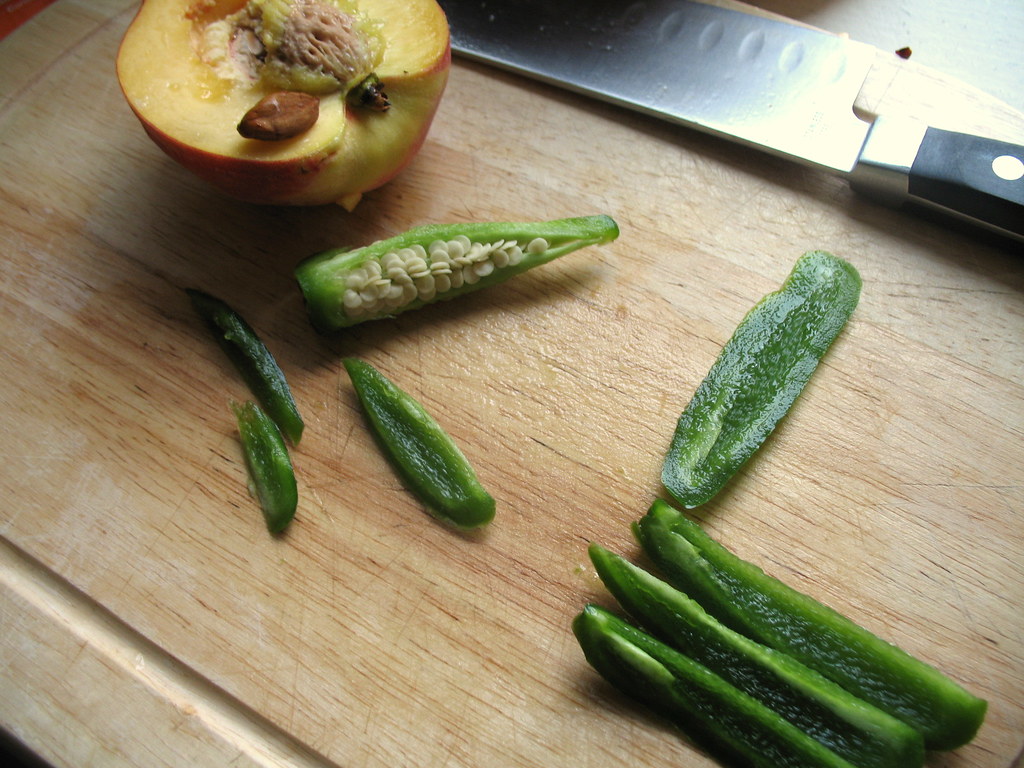 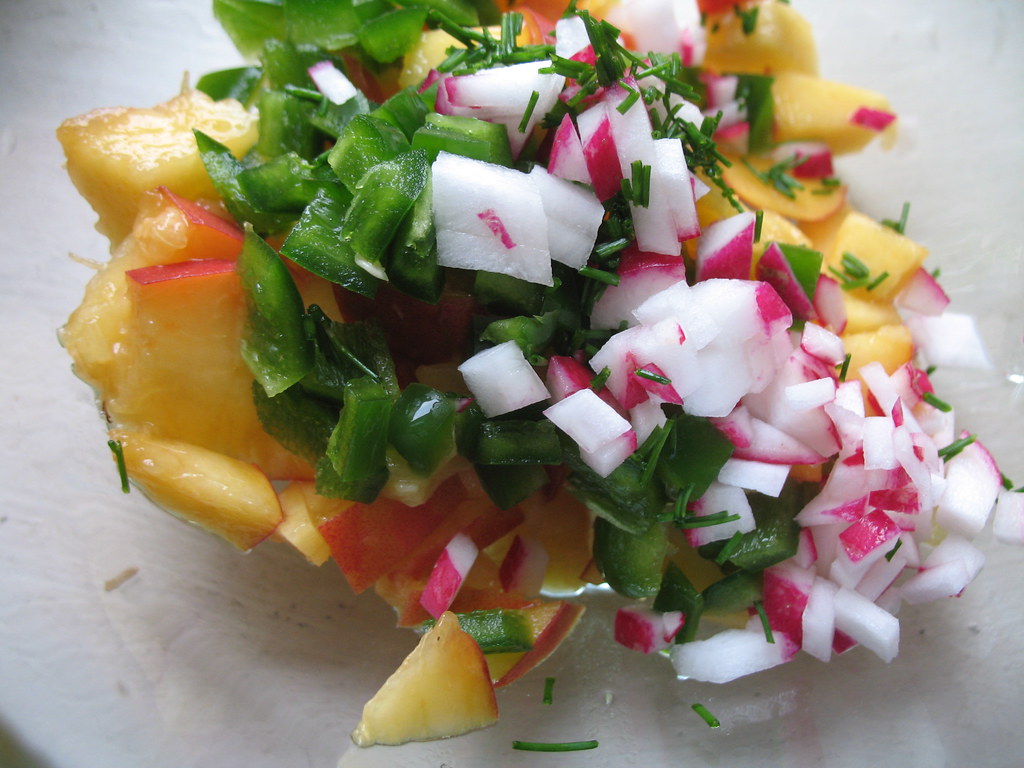 So here’s one way to do peaches and eggplant: two local summer fruits/vegetables that I’d never have thought went together before. But isn’t that what friendships are all about? (And isn’t cooking seasonally fun?) 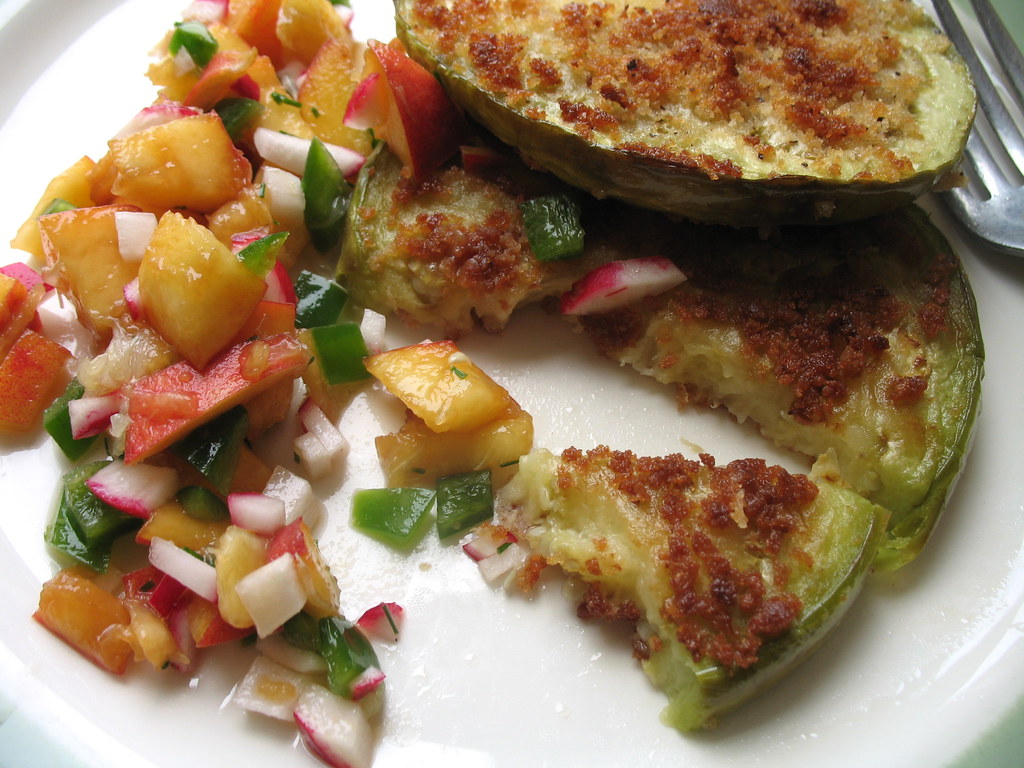 Sprinkle eggplant slices with sea salt and set aside while you chop and prepare the rest of the ingredients.

Combine the peaches, jalapenos, radishes, lime juice and chives in a bowl, cover and set aside.

Combine the beaten egg with about 3 tablespoons water and place into a large, wide bowl. Sprinkle a little salt and pepper into the breadcrumbs and place into a large, wide bowl. Heat olive oil over medium-high in a large skillet. Dredge eggplant rounds first in the egg mixture, then into the breadcrumbs. Once the oil is hot, add the eggplant slices to the pan (you may need to work in batches if they don’t all fit), and cook on each side about 3-4 minutes, or until lightly browned. Transfer to paper towels and let cool a minute. Transfer to a plate, top with peach salsa, and serve immediately.

Three brownie points: Given that this dish has the word “fried” in it, it’s made a startling comeback in terms of vitamins thanks to its being virtually all fresh, healthy produce. Eggplant, no matter the color, is a surprisingly good source of fiber, folate, Vitamin K, potassium and other nutrients. Peaches add a boost of Vitamin C and Vitamin A, and the only negative really is a minimal amount of fat from the olive oil (heart-healthy monounsaturated, however) and the egg.

Seven maple points: This dish was inspired by browsing the produce at the Greenmarket, and so has seven “green” points to show it. Peaches and eggplants both are abundant in late summer, a sacred time for cooking fresh and deliciously if you live in the northeast. Taking advantage of that, and by re-purposing stale bread for breadcrumbs, there’s not much you can say about this dish that isn’t green (except for the imported olive oil — sigh).