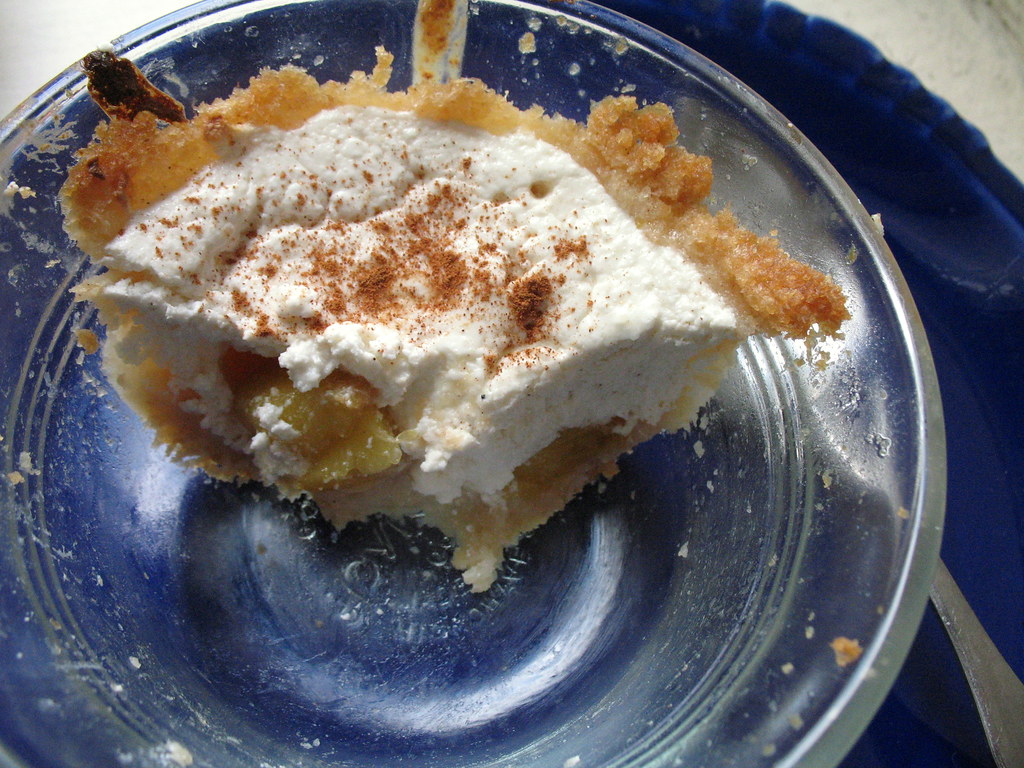 This recipe started with a lot of leftover bread. I didn’t know what to do with it; it was stale, so I ground it into coarse breadcrumbs in the food processor. Okay, so now I have breadcrumbs, I thought. What to do? This was great fodder for, let’s see, meatballs? Frying batter? Savory stuffing? Nothing that sounded too appealing during these hot weeks of July.

You know what did sound appealing, though? Dessert. Any dessert. It didn’t have to be a classifiable dish, just something to get me through the rest of the night. Filling this need, I came up with this crispy, breadcrumb-based crust to bake sweetened ricotta and fresh fruit in. 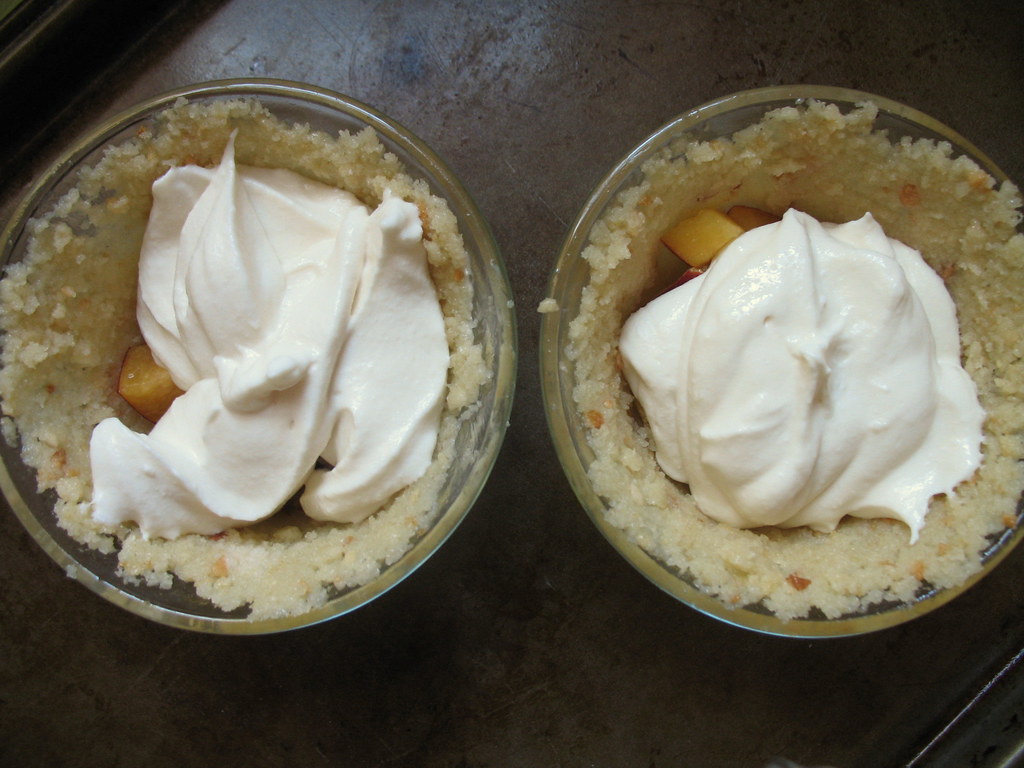 In step with this free-for-all mood I think almost any fresh fruit, chopped up and juicy, or whole small berries, would serve a suitable filling in this recipe. Stone fruits like apricots, peaches and cherries have been making their appearances at Greenmarkets throughout the city, to widespread cheer, and one of these days, I’ll have to finagle a car and check out some of the nearby farms to pick my own. But for the time being, I’ll just stick with picking through the baskets. Last weekend, I settled for some nectarines. I like these best when they’re still firm and have some crunch to them; they’re a little more tart than peaches and since I thought I’d want to cut them up to toss in something else, I didn’t want to deal with fuzzy skins. 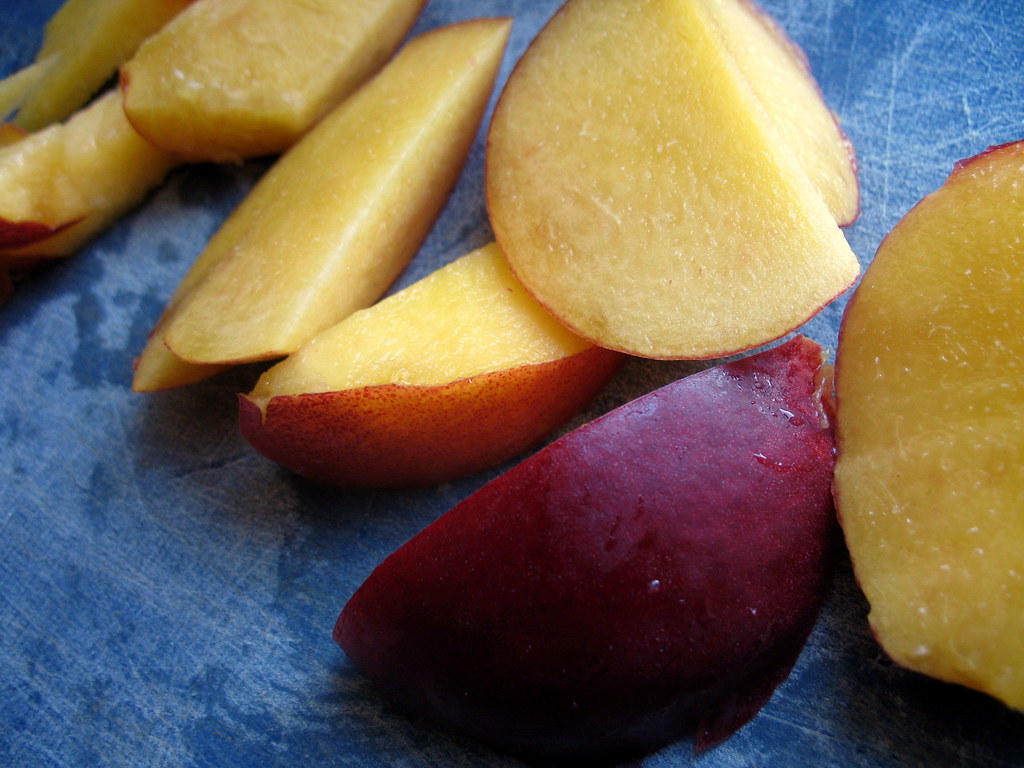 my favorite stone fruit of the moment: nectarines

Most recipes for ricotta-based custards have eggs and cream beaten into them, which is fine. I didn’t use either in this baked dessert, and if you ask me, this is fine, too. After giving the ricotta and some sugar a whirl in the food processor, its texture was so thick and creamy and its flavor so pure and luscious that I thought it could do no harm to leave it alone. After just a tiny drop of almond liqueur (a nice pairing for nectarines, I thought), that slightly sweetened, smooth ricotta was to-die-for, spatula-licking good on its own. 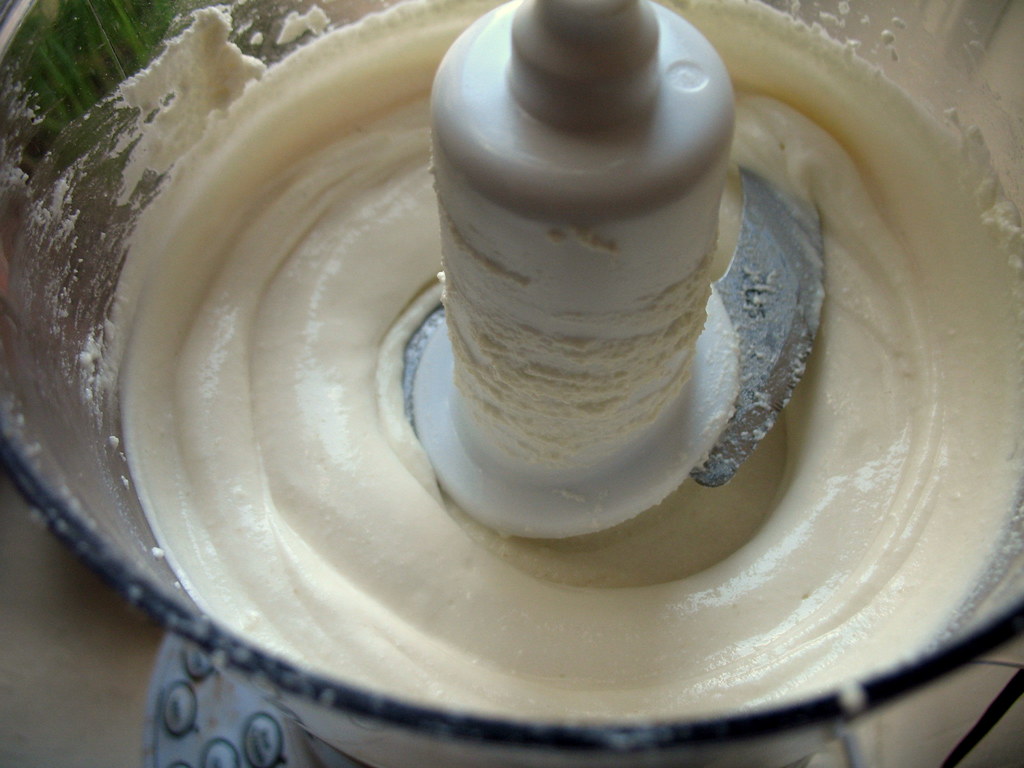 ricotta and sugar are smoothed in a food processor

The slightly savory tart shell was composed of only the breadcrumbs and some butter. The cold butter works the breadcrumbs into a pliable “dough,” easy to smush up against the sides of a ramekin and stick there. The breadcrumbs I used were still slightly moist, since I didn’t leave them out to dry too much. As with a graham cracker crust, the baking gives it a slightly toasted flavor which reminds me, in this case (using stale country white bread), of a crostini with ricotta slathered on it for hors d’oeuvres. Or of buttered toast with jam for breakfast. Or a combination of the two. Whatever the comparison, it’s completely delicious. 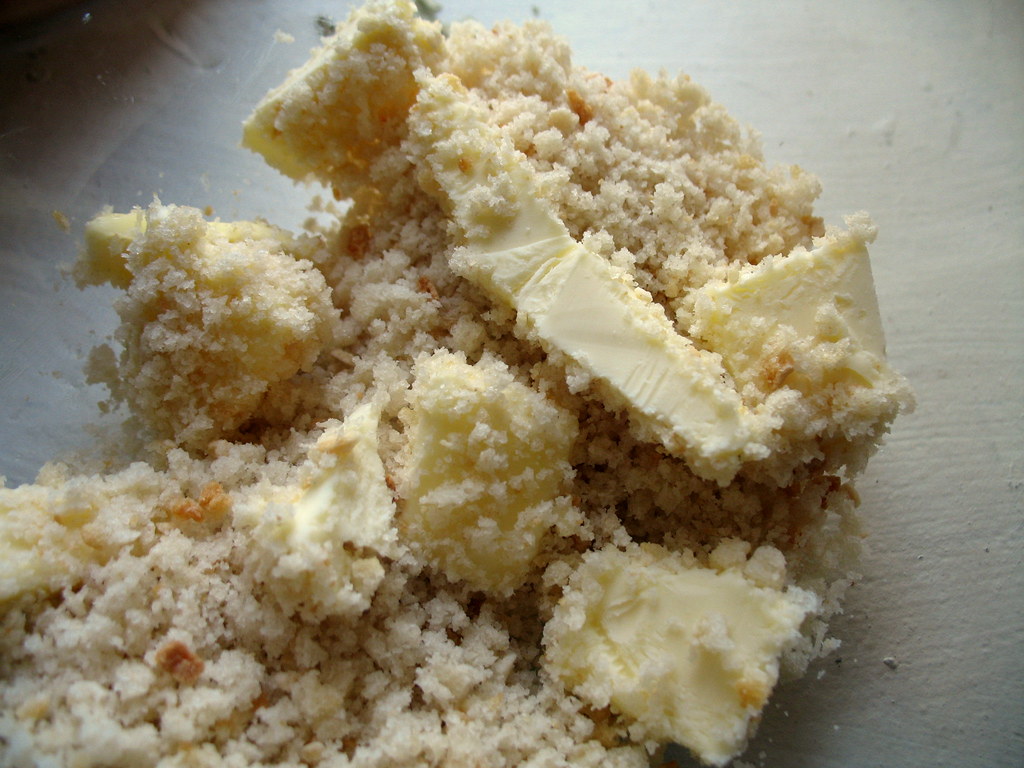 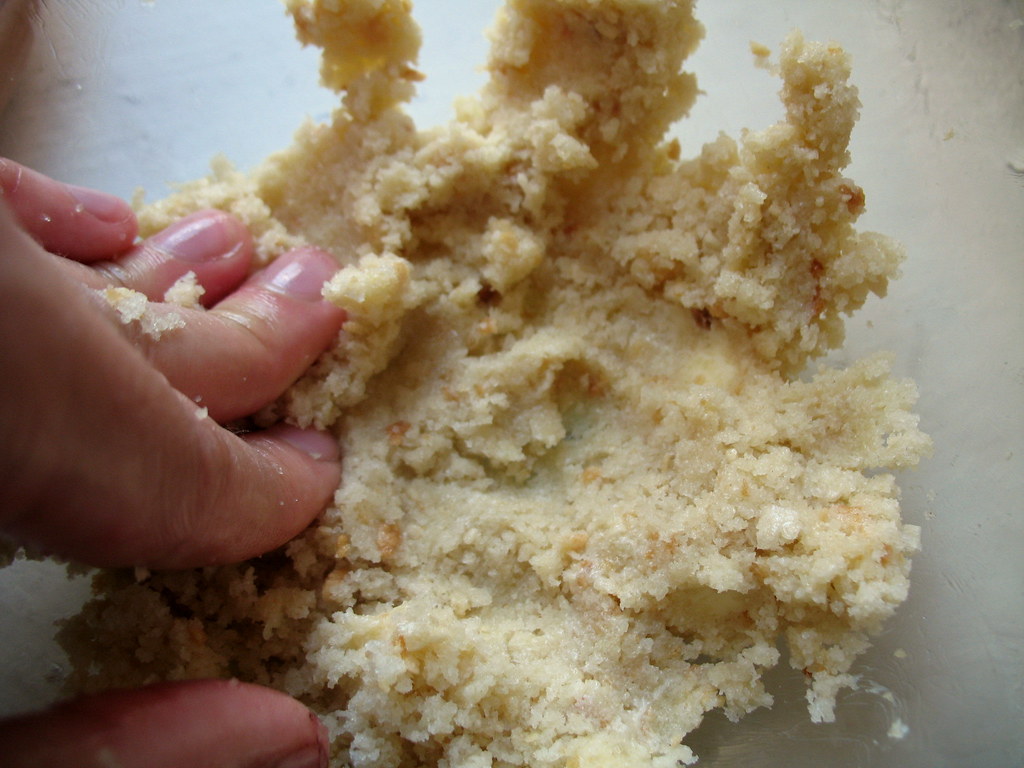 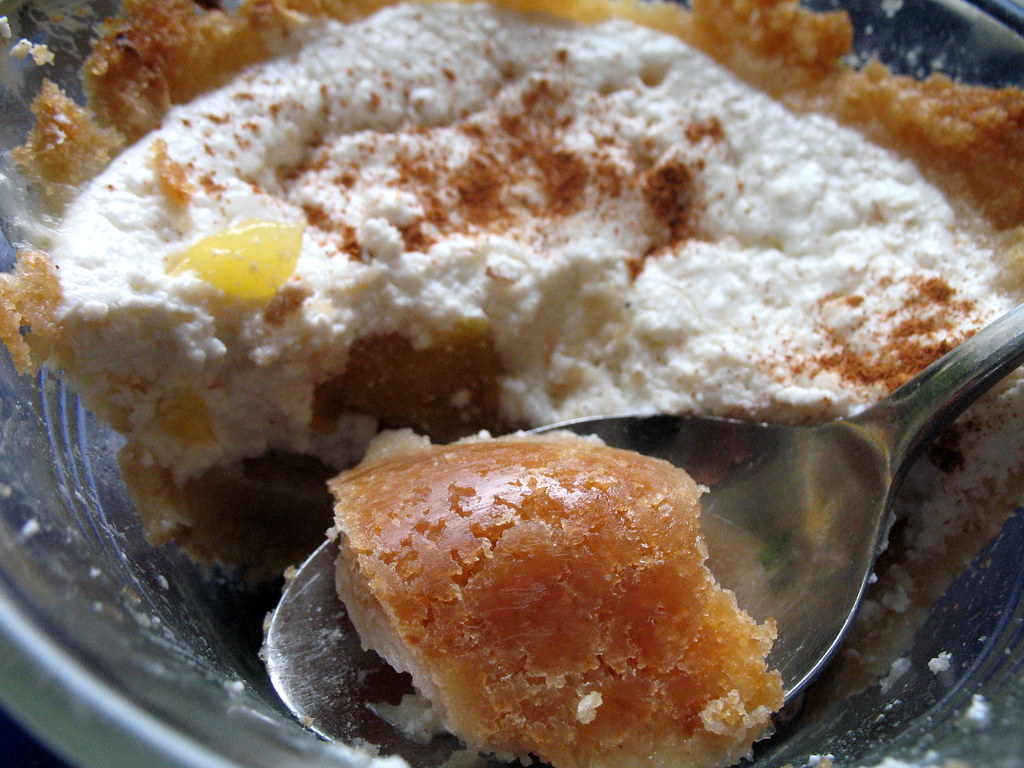 resulting in a quickie pastry crust

Preheat oven to 375 degrees. Put ricotta, sugar and almond extract/liqueur in a food processor and pulse until mixture is smooth and creamy.

Using a pastry blender or just your fingers, cut the butter into the breadcrumbs until evenly distributed into a unified, greasy sort of paste. Divide into two halves, and press each down into the bottom and along the sides of two ramekins to form a tart shell. (Use slightly less or slightly more breadcrumbs than indicated, as needed to fill the sides of your ramekins.)

Divide the fruit equally amongst the two ramekins. Top each with the ricotta mixture, gently smoothing out the tops with a spatula. Add optional sprinkle of cinnamon on top. Bake for about 20 minutes, until the sides of the crust are lightly browned. Remove from heat, and let cool at least 10 minutes before serving (or, as a delightfully refreshing alternative, let cool completely, then chill covered for 2 hours and serve cold). 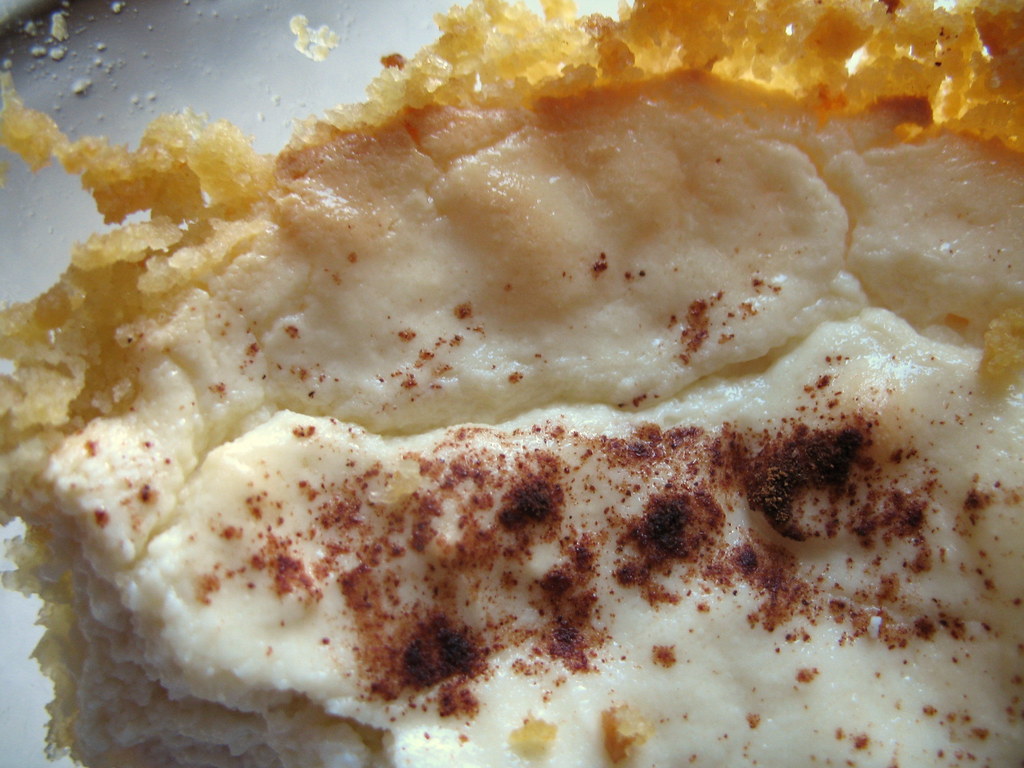 Six brownie points: The first thing you might notice about this dessert if/when tasting it is that it isn’t very sweet. The ricotta’s been sweetened with just a touch of sugar, and the crust has none at all. That said, each serving has a tablespoon of butter for that crispy, toasty, buttery crust, and the rest of the fat tally depends on the ricotta you chose to use (I opted for part-skim instead of whole). Depending on what fresh fruit you use, this dessert also has vitamins and calcium from the ricotta.

Six maple leaves: I missed a major opportunity here–the ricotta. I didn’t think I needed or wanted ricotta when I passed by Salvatore Brooklyn’s stand at Brooklyn Flea the last time I went, though I’ve sampled their fresh, locally produced ricotta and it is outstanding (not to mention made from pasture-raised cows). So I just got a ho-hum grocery store carton. The rest of the three or four ingredients in this dessert were consciously purchased, or as for the bread, made at home.