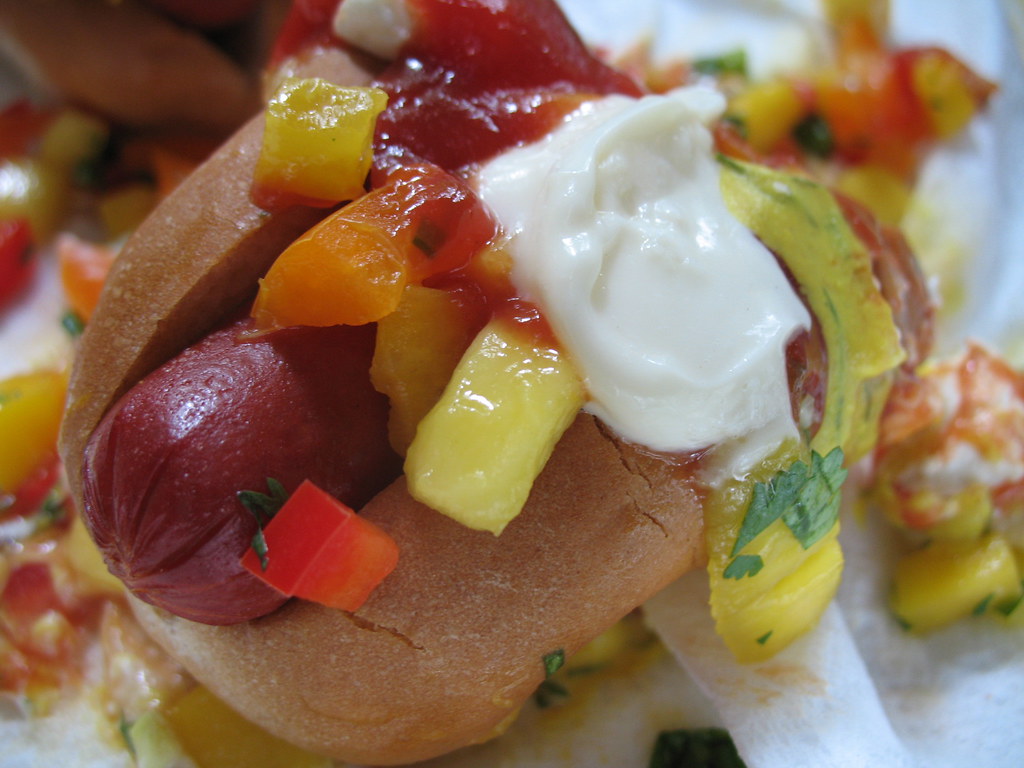 I was a proud glutton on Saturday. Not that co-hosting a Great Hot Dog Cook-Off isn’t reason enough to celebrate (or pack on five extra pounds), but through it all, we made over $1500 for the Food Bank for NYC from ticket sales and cash donations at the event. Fourteen chef-contestants made trays full of fabulous, fantastical frankfurter creations. We made new friends, lots of them. And it was also a day when the majority of the ballot-voting audience made this fascinating discovery: Goat cheese and hot dogs go REALLY well together. Especially with mangoes.

Although this innovation, the OK Dog (pictured above), may have won the Audience Award, every single hot dog served at the event was a winner in its own, often never-before-seen category. Internationally or regionally inspired, holiday or hue-specific, the recipes all flew far from the nest of your standard BBQ fare. 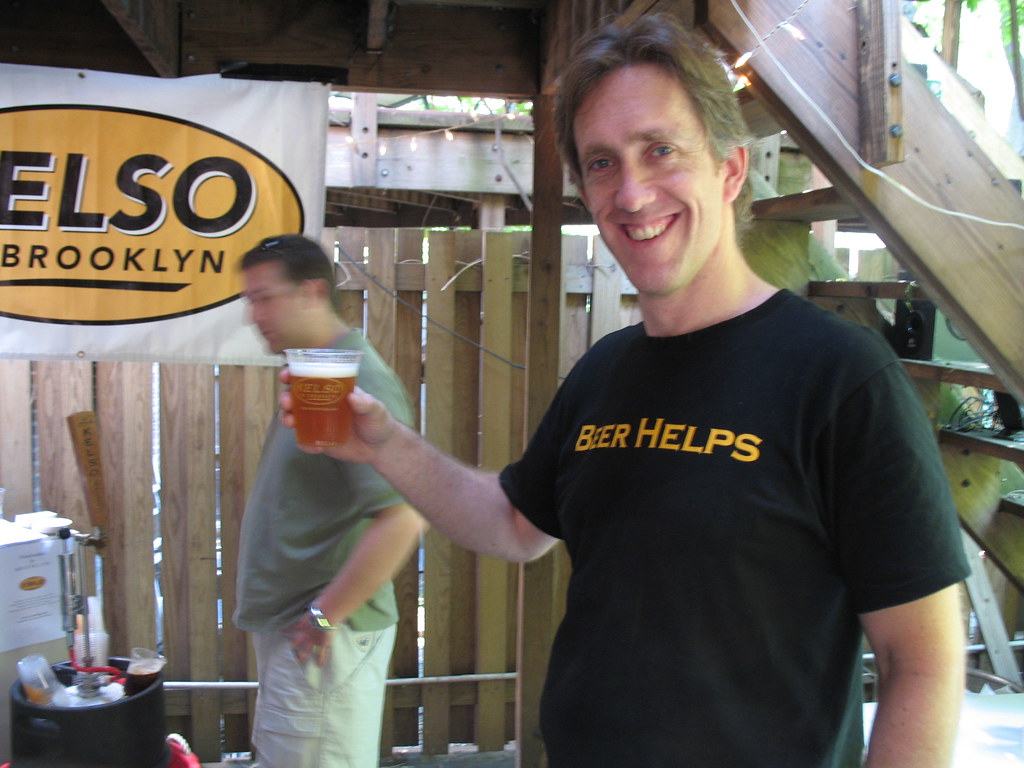 Kelly of Kelso proves beer does help at a barbecue 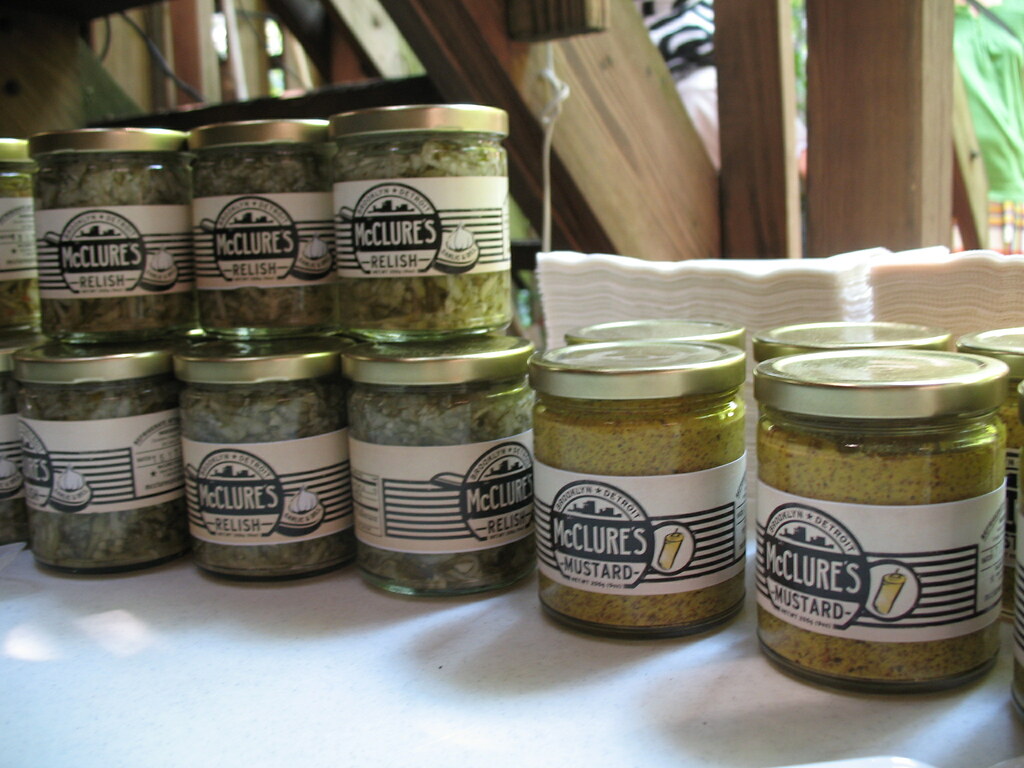 as do McClure’s relish and mustard

Held in the cozy, shady backyard of Kara’s (cook-off creator and co-host of Ted & Amy’s Supperclub) Fort Greene residence, the event took off on a beautiful July afternoon. Two of the three kegs graciously provided by Brooklyn-based Kelso craft brewery got flowing, with the help of proprietor Kelly himself. Jars of McClure’s relish and mustard were set out for sampling with some pretzels and for later use with the hot dogs. Not that I needed to add to this, but I resurrected the Maki Dog and Baked Brie Dog to serve as appetizers for early-comers. Then, off the cooks went. 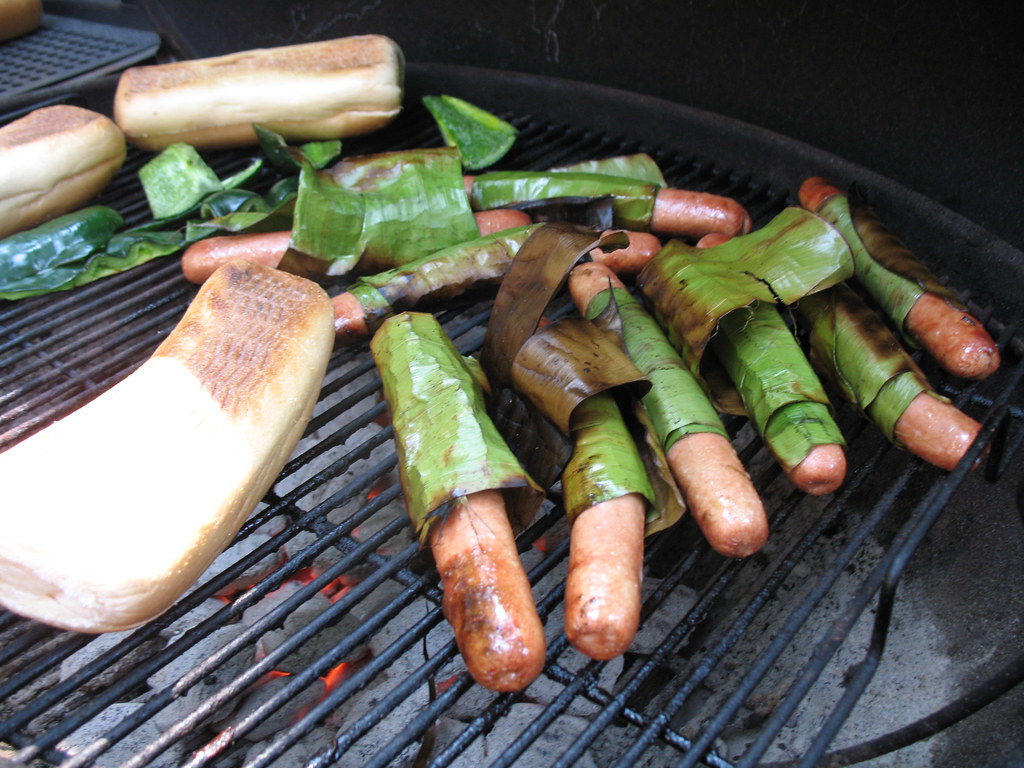 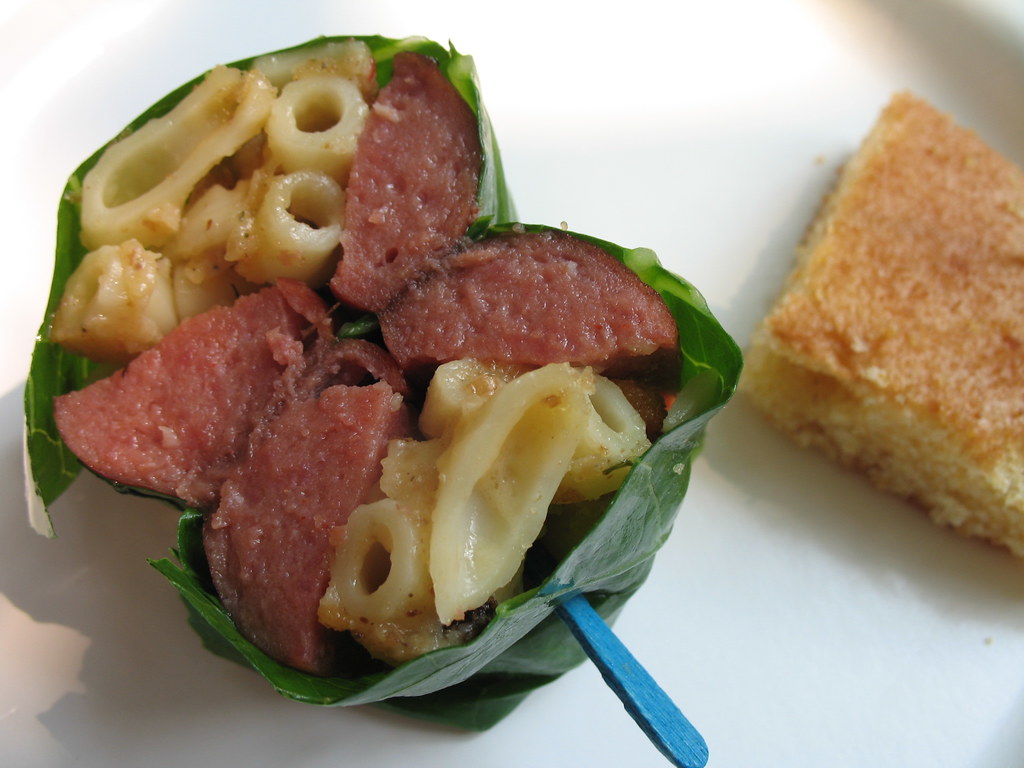 an honorable mention went to this mac ‘n cheese-stuffed, collard green-wrapped dog served with cornbread and a fizzy beverage 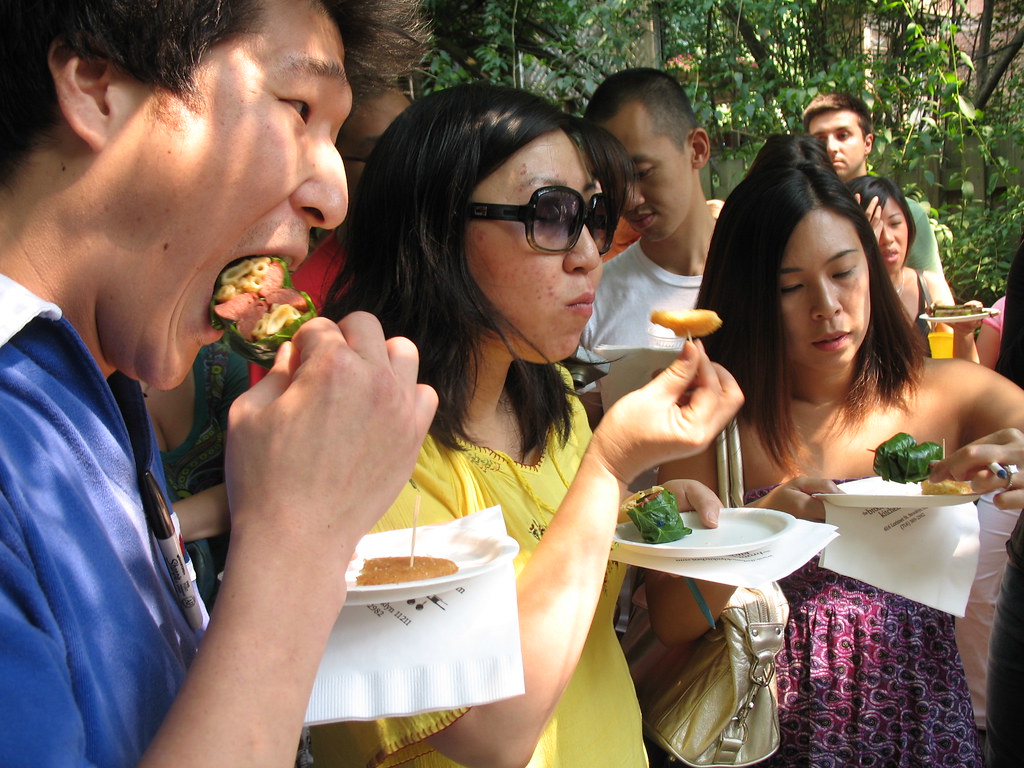 the judges dig into Round 1

The first round saw two types of leaves wrapped around hot dogs: Team Good Times’ banana leaf-wrapped, bacon-topped dog and Lindsey Reilly’s collard green-wrapped Mac Daddy Dog, stuffed with mac and cheese. Also in Round 1 was Eugene Kim’s aforementioned OK Dog, with a refreshing and spicy mango-jalapeno salsa, three sauces and goat cheese (which I snagged the recipe for below!). Cooking in the Veggie Dog category for Round 2, Karol Lu’s banh mi sandwich inspired tofu dogs went head-to-head with Arin Kramer’s “Estelle’s” Corn Dog, named for her hen who contributed eggs to the battered and golden-baked cornmeal crust. 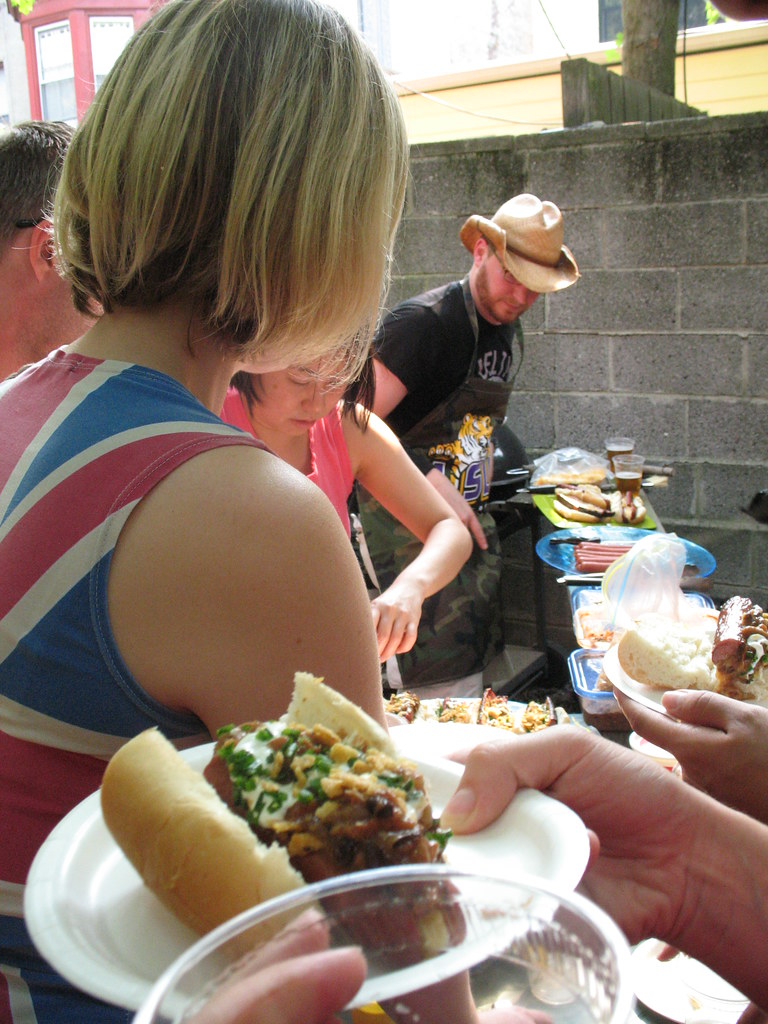 someone snags an Alligator Chili Dog 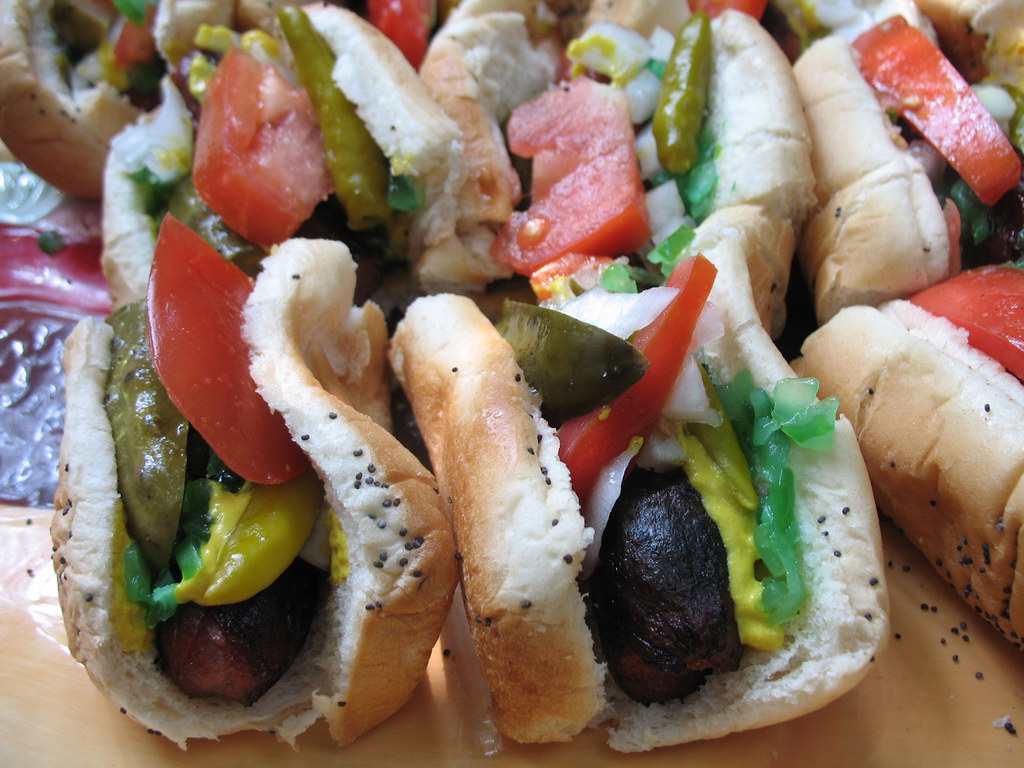 the Chicago Style Dog: not complete without the celery salt 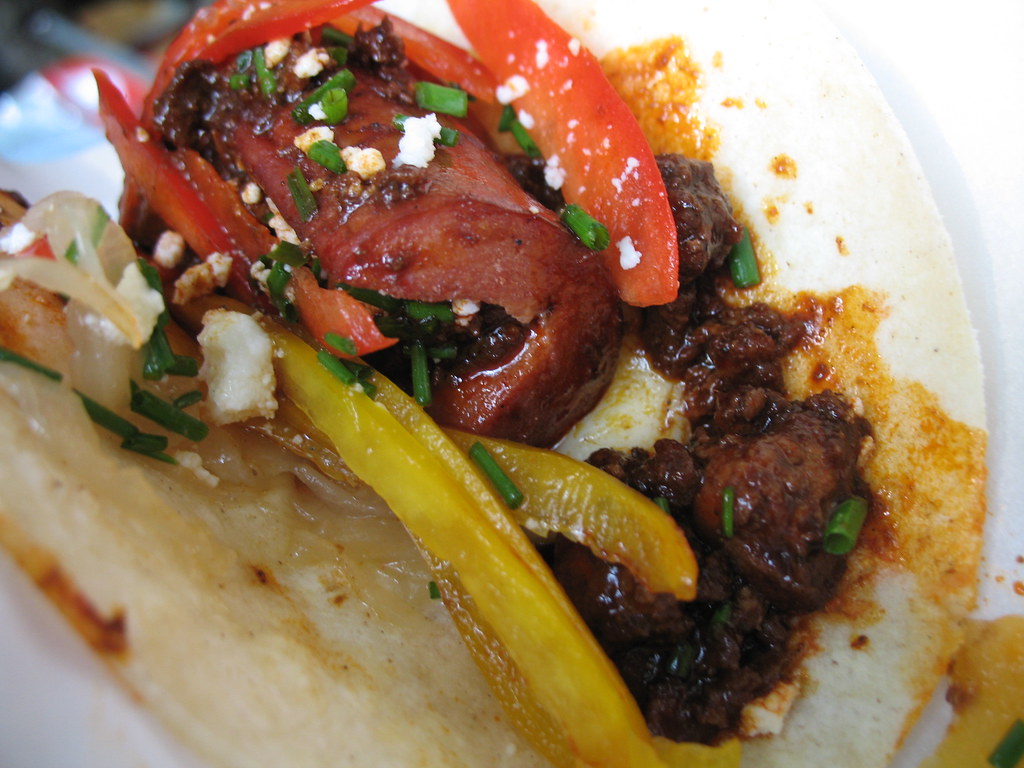 the Oaxacan Chili Dog, made by a 3-year Great Hot Dog Cook-Off veteran

In Round 3, it was all about location: Scott Gold‘s tequila-spiked alligator and Wagyu beef chili dog topped with crushed Fritos was a nod to his New Orleans upbringing; Phil Lubliner’s Chicago Style Hot Dog was lovingly and meticulously crafted after Stash’s famous Highland Park hot dog joint; Greg Galant’s Deep South Dog was topped with grits, bacon and cheddar; and Eric Friedman’s Oaxacan-inspired dog was served in a grilled tortilla with a scoop of chorizo mole. 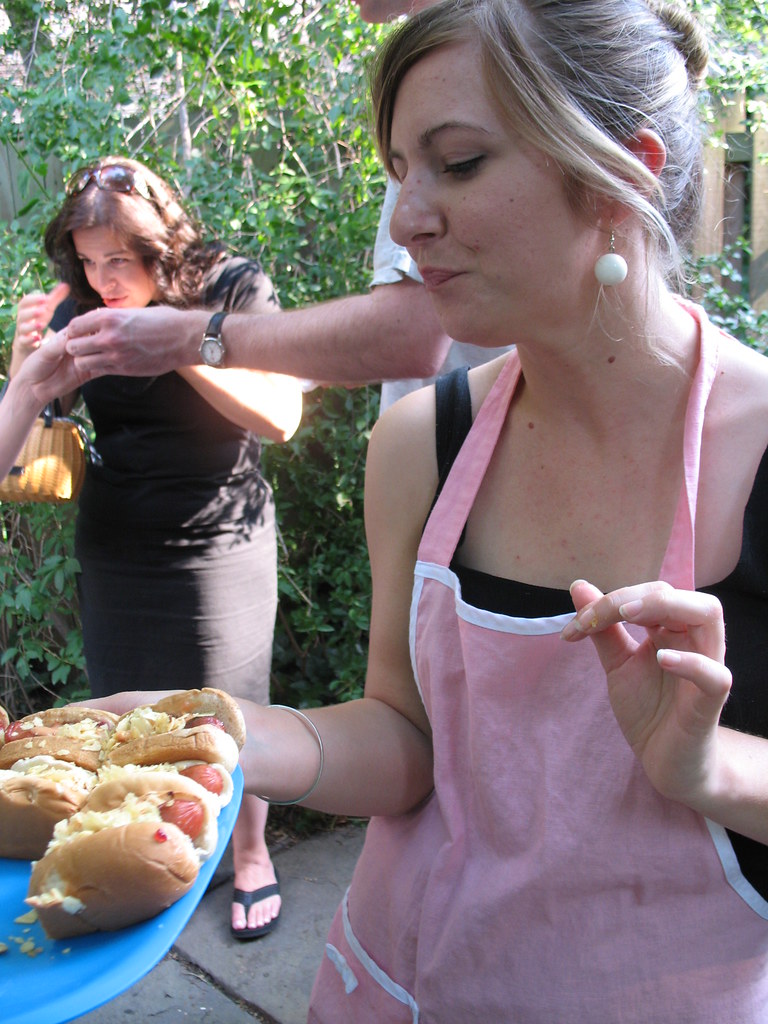 the Colombian Dogs get served up 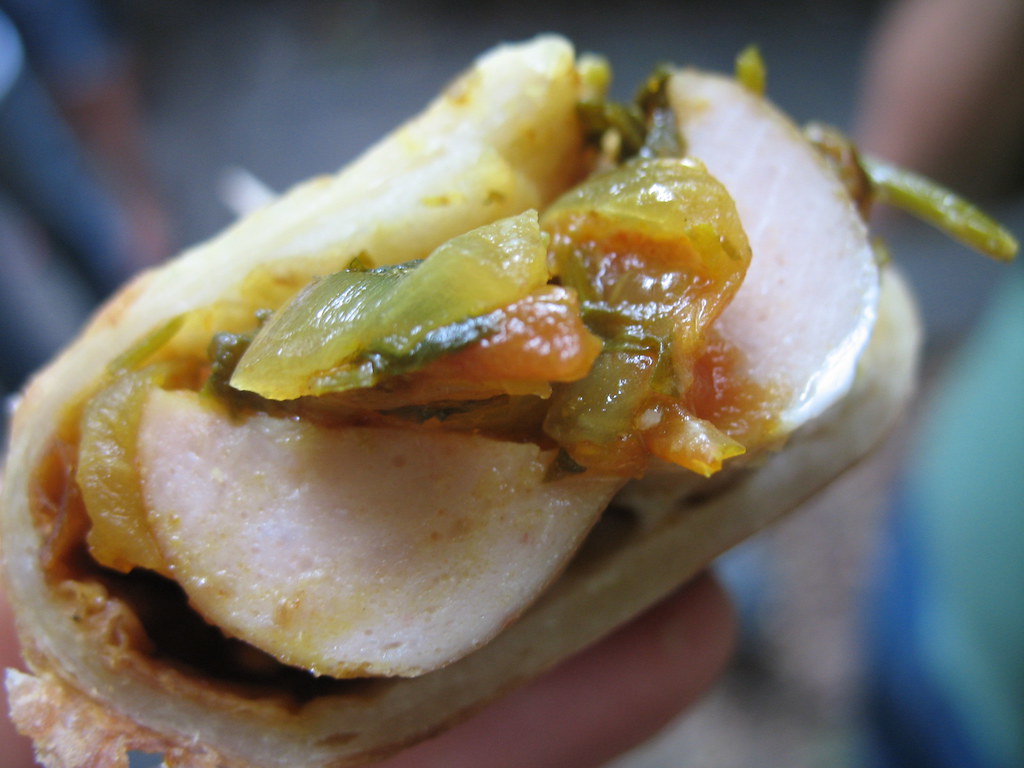 a close-up of the mouthwatering Bombay Dog 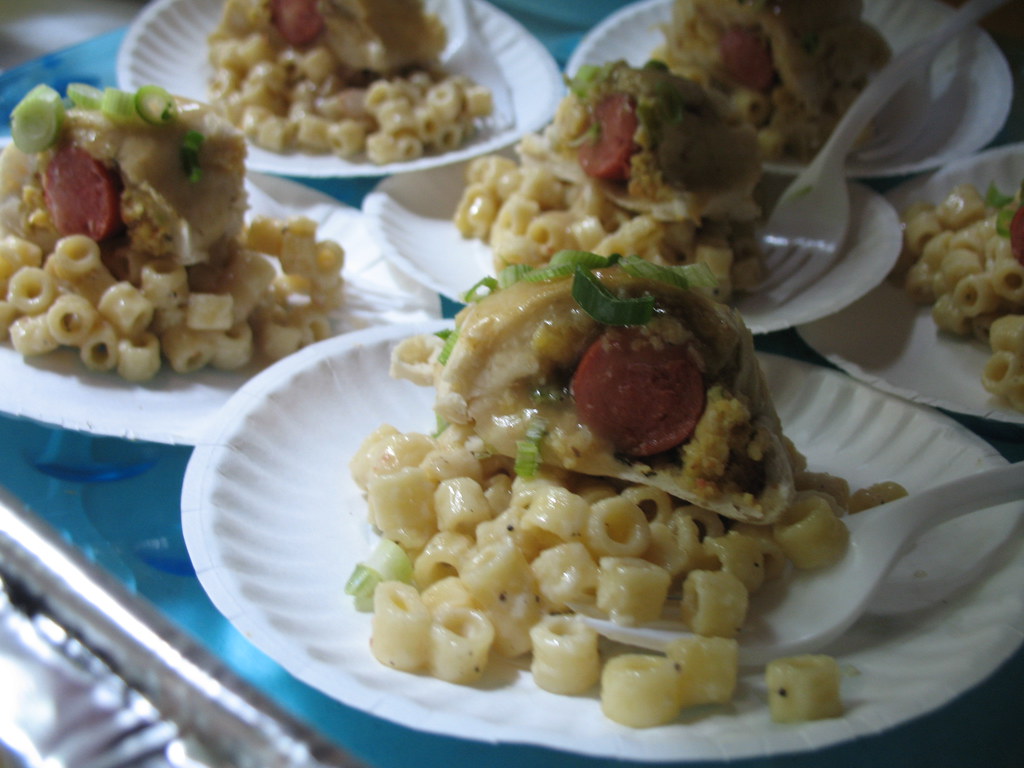 time for grace: a round of Thanksgiving Dogs

Drifting farther from North America, Round 4 featured the tangy, potato chip-topped Colombian Dog by Laena and Emma McCarthy, made with their own homemade jam and a secret pink sauce. Turning to India for inspiration, Benny Bhada perfected the Bombay Dog, a chicken frank smothered in chutney, wrapped in homemade naan, and served with raita and chile sauces. (This was my personal favorite dog of the day — not too spicy, not too sweet and most of all, not too greasy… I’ll need to get her recipe!). And bringing it all back home, Midge Pingleton’s Thanksgiving Dog was encased in puff pastry along with some bread stuffing, served atop mac and cheese and finished with a ladle of gravy. Thanks, indeed. 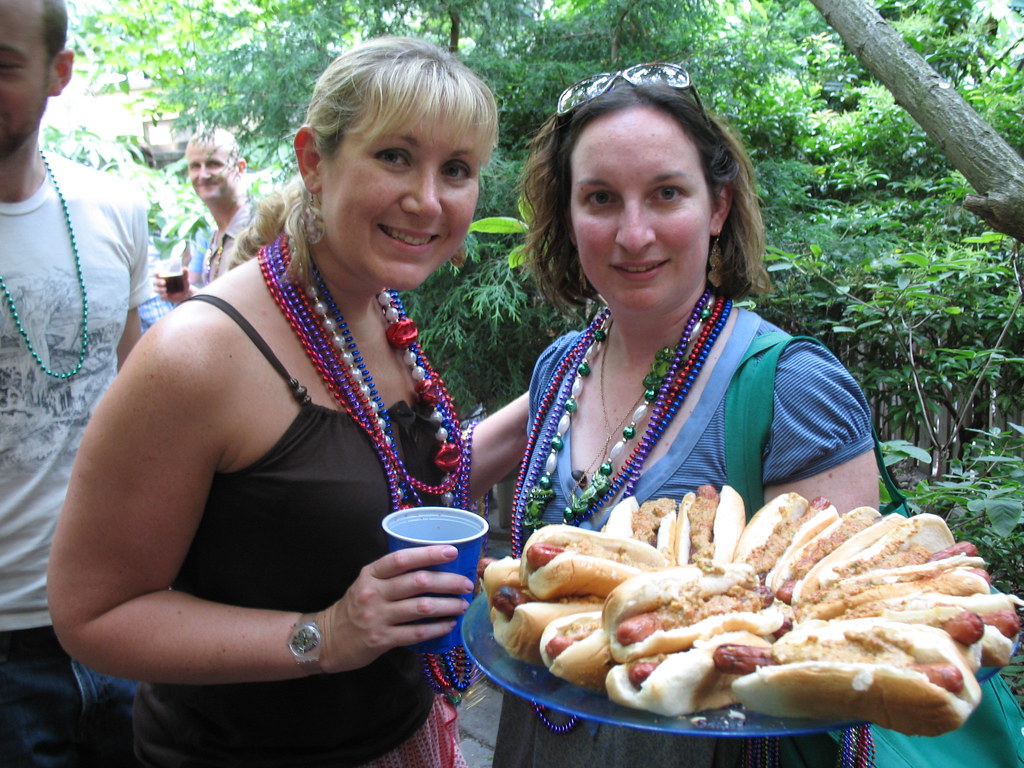 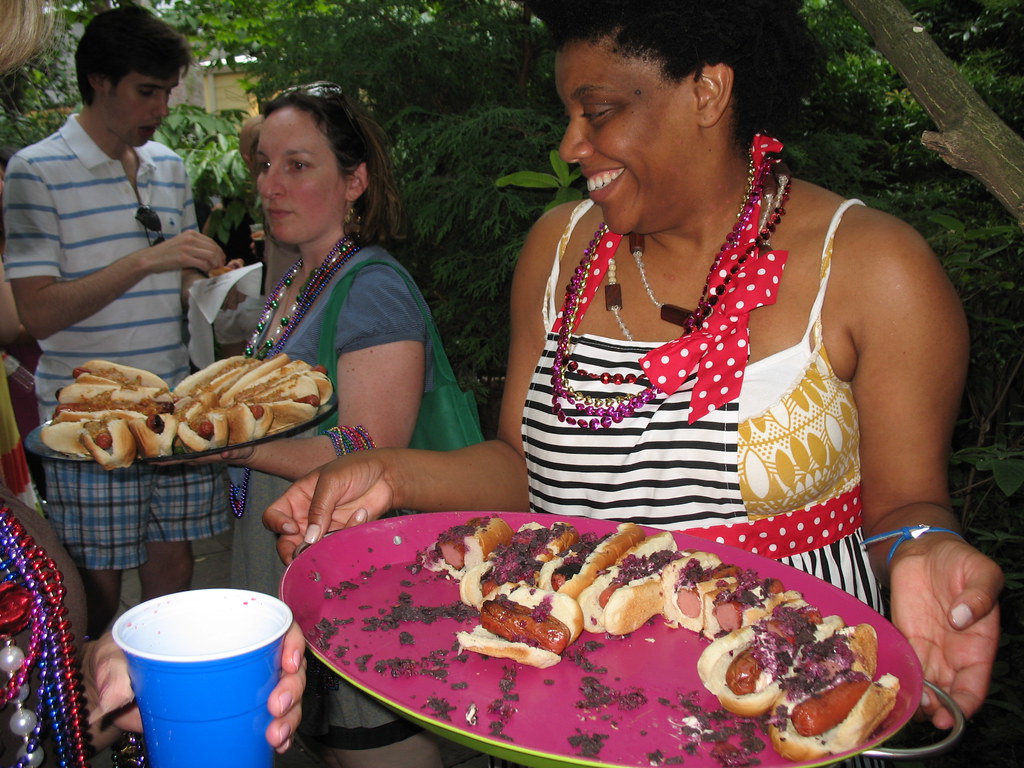 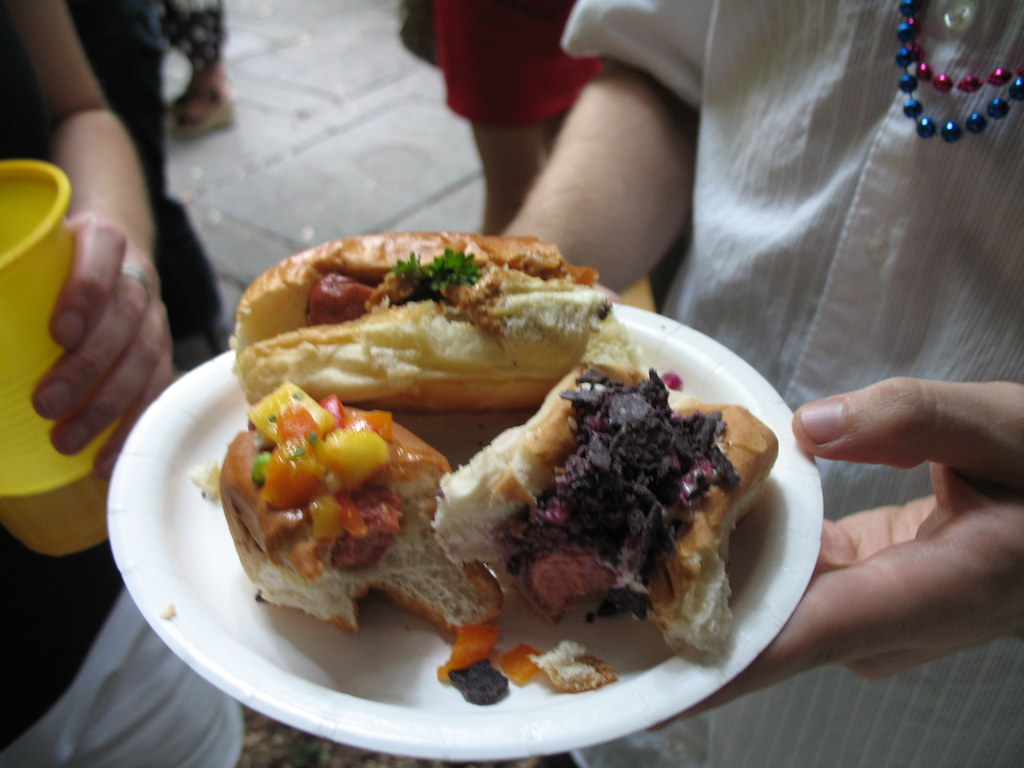 Due to one chef who fell ill before the big day, the last round, Round 5, only forged two more hot dogs. Somehow, everyone still had an appetite for them. I credit this feat to Nichelle Stephens (of Cupcakes Take the Cake) for her Purple Haze Dog, a punky-looking entry with bright red cabbage, red onion and mixed berry relish; and Kim Grauer, for her gourmet Cajun Dog with its spicy-mustardy, fresh red peppery-tasting secret sauce blend.

Alright, so you want to know the winners? Formally, the contest was divided into three categories: Chili Dog, Veggie Dog, and Neither of the Above Dog. Of the two chili dog entries, the winner was a very gratified Eric Friedman, for his Oaxacan chorizo mole chili dog. (Eric’s never won his past two years competing.) Karol’s banh mi dogs edged out Arin’s corn dogs in the Veggie Dog category (I had nothing to do with the judging — swear!). Finally, in the crowded and ridiculously varied Neither of the Above category, it was Midge’s Thanksgiving Dog that ultimately prevailed. Each chef, winners included, received goody bags thanks in large part to The Brooklyn Kitchen. 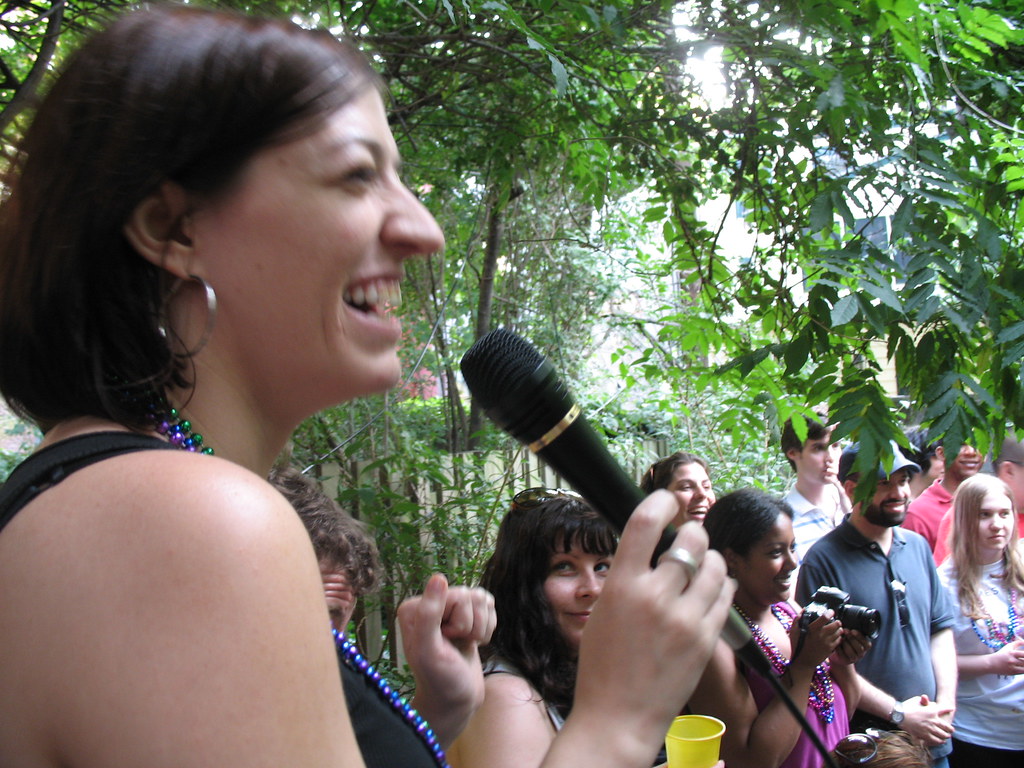 These were all no doubt tough calls for the judges, who scored each and every hot dog on their own individual cards, without conferring with one another. We asked them to consider two-thirds for taste and one-third for presentation. As luck would have it (or perhaps I should say, as Brooklyn foodie events would have it), when the judges were chosen from the audience by a random hat drawing, none other than Serious Eats writer Jenn Sit was drawn. Check out her astute post and photos from her prime point of view here.

Adding to that democratic spirit, we also pooled the audience for their favorite hot dogs. It was a close call between two entries in particular: Honorable Mention was given to Lindsey’s Mac Daddy Dog, but by a healthy margin, the crowd chose Eugene’s OK Dog. Both of these dogs were served in the first heat several hours before the ballots even went around, which I’ll say is testament to their lasting deliciousness.

As promised, I squeezed the recipe for the OK Dog out of Eugene. A first-time Great Hot Dog Cook-Off contestant, Eugene explains the genesis of his recipe:

“Many people have asked me, ‘How’d you come up with the idea for this dog?’

It’s funny because on two separate occasions, I thought of jazzing up my barbecue with a simple, fun hot dog. First, I made a blue cheese filled hot dog, with slices of raw jalapenos. Then, I topped off a hot dog with a tomato salsa and sauerkraut. Since both items were a huge hit, I thought, ‘What if I combined the two…and made it gourmet…’ After a few tweaks here and there, the OK Dog was born (in loving memory of my grandmother, Okyi Kim, who understood that my passion for food was something worth sharing with others).”

The OK Dog
(for 4 servings)

1. Mango/Jalapeno Salsa (must be prepared 30 minutes in advance and stored in the fridge)

Dice the mangoes into ½ inch cubes and place in bowl.

While wearing gloves (important!), finely chop the jalapenos (remove seeds if mild salsa is preferred) and place in bowl with mangoes.

(optional):
In order to further reduce the heat of the jalapenos, add a tablespoon of red wine vinegar.

Season with salt and pepper.

Gently fold the mixture with a spoon. Be careful not to mash the mangoes. Place the bowl, covered, in the fridge for at least 30 minutes prior to serving.

Sweet Ketchup
Add ½ a table spoon each of both the cinnamon powder and vanilla powder (be careful, a little goes a long way), to 2 cups of ketchup, and mix with spoon.

Garlic Mayo
Add 2 tablespoons of honey, 1 minced clove of garlic and ½ a lemon (juice), to 2 cups of mayonnaise, and mix with spoon.

Dill Mustard
Add handful of finely chopped dill and 1 tablespoon of cumin, to 2 cups of mustard, and mix with spoon.

(optional)
Using a sharp knife, gently slice 1 inch off the top side (soft) of the bun. (a thin, lighter bun allows you to capture the full flavor of the goat cheese and salsa)

Place 4 franks into boiling water and remove after 5 minutes (or when franks appear slightly swollen).

Transfer franks to plate and let rest for a minute. When slightly cooled, make an incision from the top of the frank to the bottom, making sure that the knife does not go through the frank. Do so for all 4.

Place all 4 franks on the grill, incision side up, for 2-3 minutes (it’s all about getting the grill marks).

Transfer franks to a plate and let cool. Using a butter knife and a blade’s length worth, gently fill the incision of each frank (a difficult and messy task but so worth it) with the goat cheese.

Top off the frank with the mango/jalapeno salsa. Be generous.

Finally, sprinkle the lemon zest over the finished product and serve.