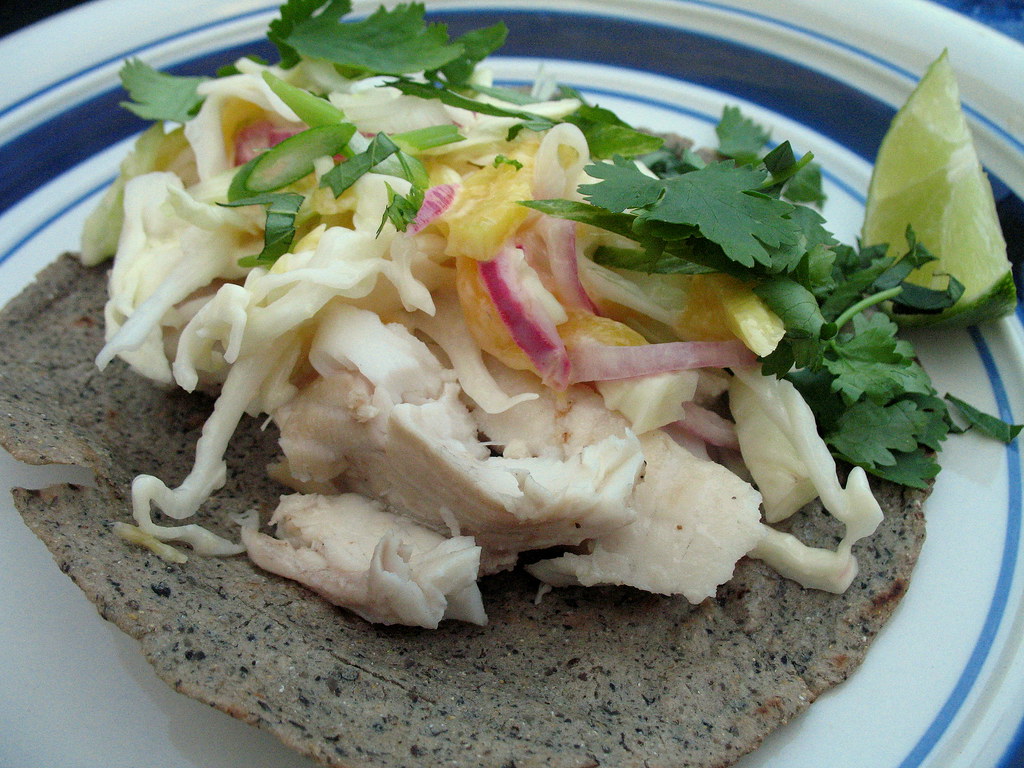 Unanimous “yes”es flooded my inbox from the crew. I am so glad I’m no longer dating a seafood-hater. Fish may thrive underwater, but I think they do smashingly well on a hand-ground corn tortilla against cool, creamy slaw and snappy herbs, and drenched with tangy lime juice. I overheard mention of “getting fish tacos” while on the boat leaving Governor’s Island two weekends ago, when the above ninety-degree heatwave was in full swing and the legendary Baja-inspired surfer food was the only thing that could wake anyone’s otherwise dormant appetite. It was like hearing the word of God. It almost hurt to not be able to drop everything and make fish tacos immediately over the course of the next week and a half. There was too much to do, and too many barbecues in between; but when time came to have a fish taco party, did we ever rise to the challenge.

Taco night was a team effort, really. The first step took place after meeting the founder of Hot Bread Kitchen at Brooklyn Flea. Inspired by the innovative social mission that the non-profit bakery is based on — it employs immigrant women from the community to make the breads of their various ethnic cuisines, like tortillas and lavash — I purchased a pack of fresh, hand-ground blue corn tortillas. Recently declared the “best in the city” by the New York Times, these were handmade in the traditional fashion, from fresh masa using a tortilla press. They’re kept chilled and sold in vacuum-packed bags of eight for $5, a bargain if you ask me, least of all for its rustic authenticity. I grabbed the blue corn tortillas, because I’d never had nor seen ones before (plus, I thought they’d make lovely contrast against the white fish). I couldn’t wait to warm them on a grill. 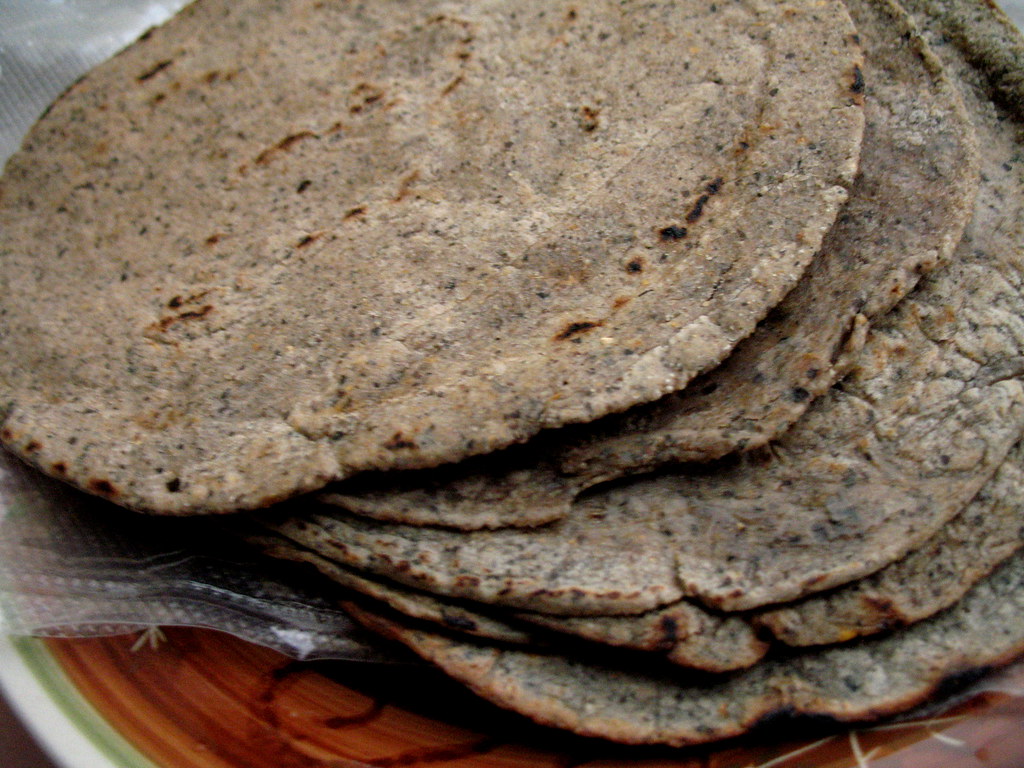 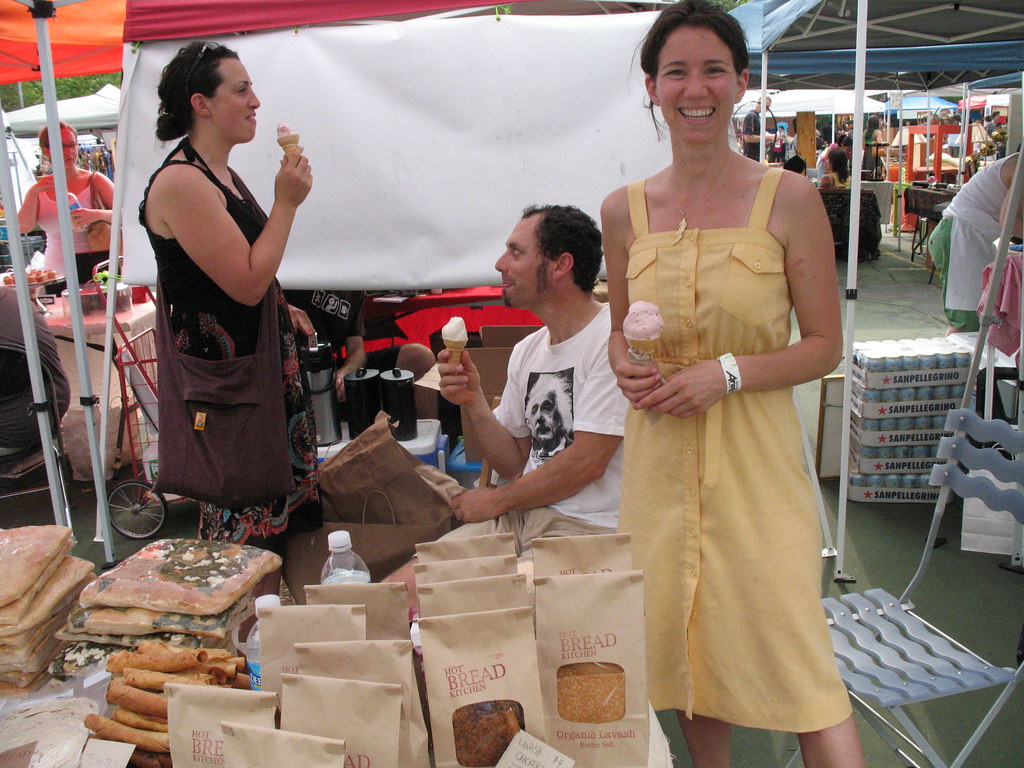 
Next, I’d recently experimented with a mango, cabbage, lime, scallion, cilantro and fresh mint coleslaw for a barbecue last weekend, and found it to be a hit. A crunchy, creamy cabbage slaw is the classic fish taco topping, after all, so why not re-purpose it here? When the designated fish taco night came around, Matt picked up some tilapia fillets. Karol brought the homemade guac and chips. And everybody else brought Coronas. All the ingredients were in: it was a well-coordinated mission. 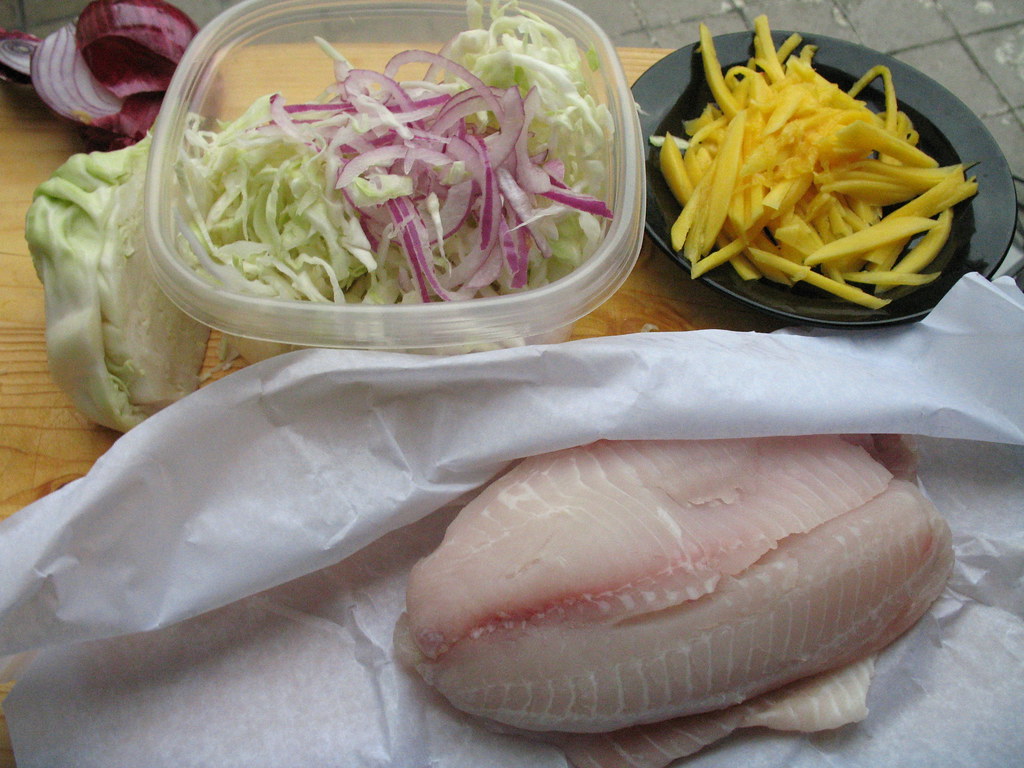 the makings of a memorable meal

However, a glitch in the master plan came about when it began raining, just as soon as we had convened on a roof patio. This was not the beach bumming, surf-rocking day I had dreamed of. The charcoal was starting to get soaked, but our spirits were still high. Like most showers in the last week, this one didn’t last terribly long, and we grilled the fish fillets up amidst a slight drizzle that I have to wonder might have contributed to their juiciness when thoroughly cooked. 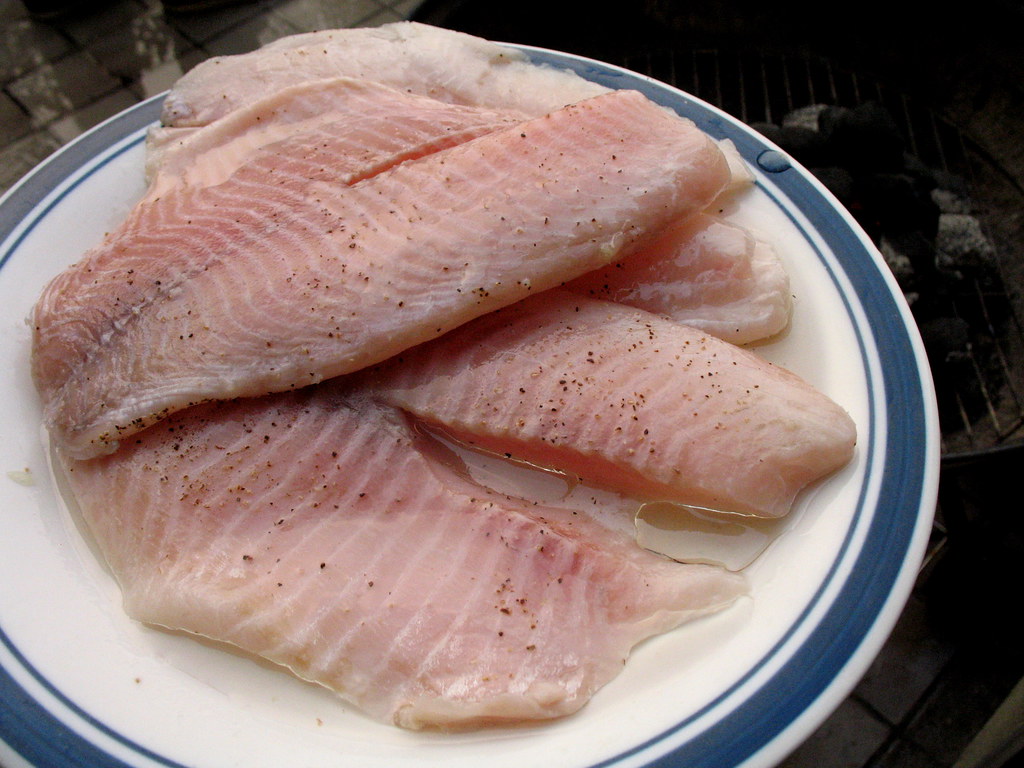 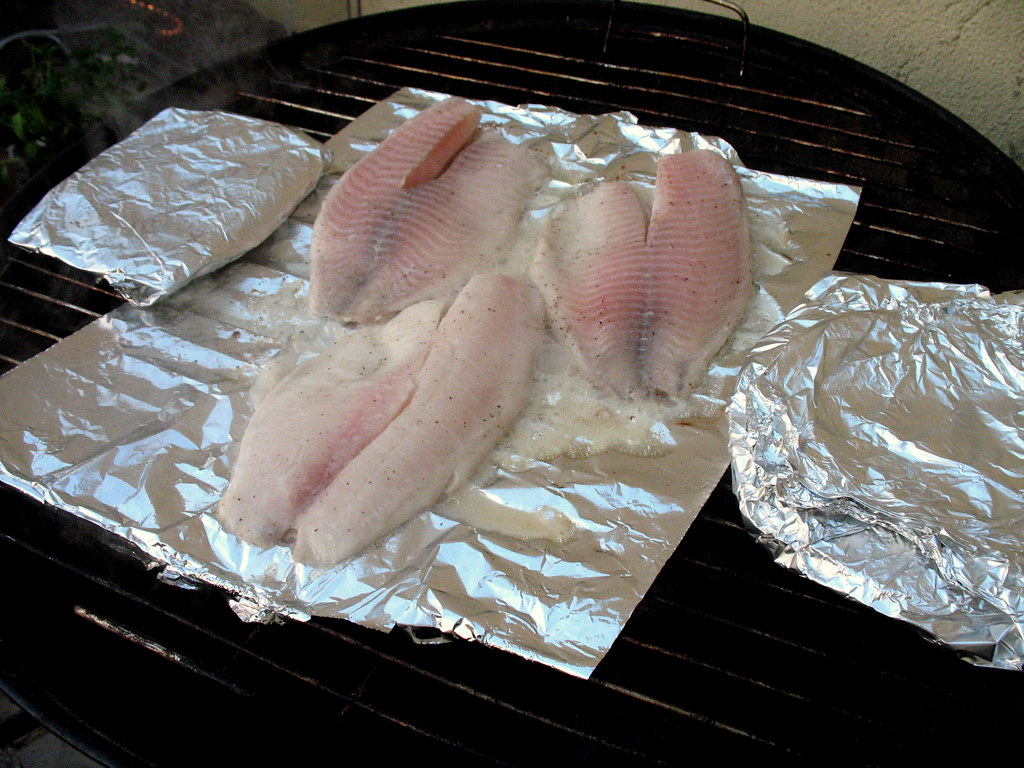 
I didn’t do terribly much to these fillets, and I didn’t want to bread them and deep-fry. The simple lime, salt and pepper marinade could have used a little kick of hot pepper. But as they were, all you could taste was fresh, clean, tender fish. It’s commonly said that the freshest fish doesn’t taste “fishy,” so I’m not quite sure how to describe the mild flavor (or lack thereof?) of fresh grilled fish, especially one as benign as the tilapia. But there’s something there… a whiff of the sea, perhaps. 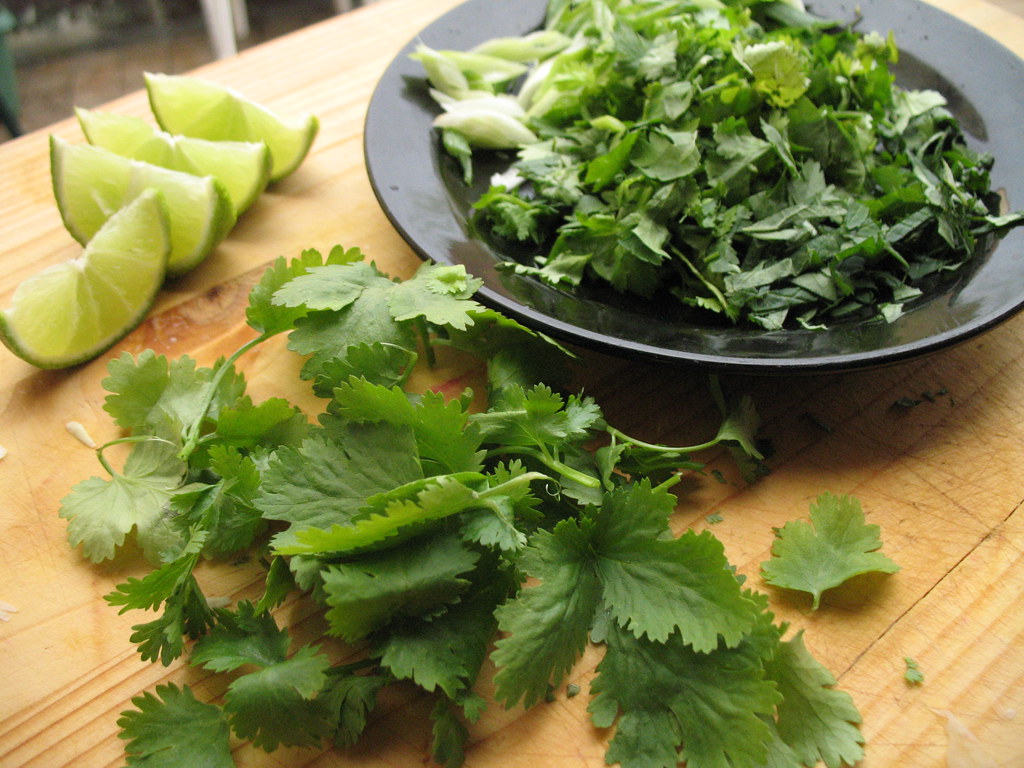 
The mango slaw in this recipe can always be made as a side course, with the herbs in the recipe tossed in. It keeps its refreshing taste and crisp bite unexpectedly long, and always tastes better after chilling for a while in the fridge, flavors marrying. Even though it hurts the Green Factor ratings of my recipes (and literally gives me a slight pang of guilt/regret) I still can’t resist putting mangoes in things. They’re far from locally grown, but so are lemons, limes and black pepper, and I can’t resist those, either. So I hope you’ll recognize by now that the Green Factor rating is there not to chart an upwards battle to be the most eco-perfect eater. It’s about being aware and engaged. Which is, sometimes, the best I can do. 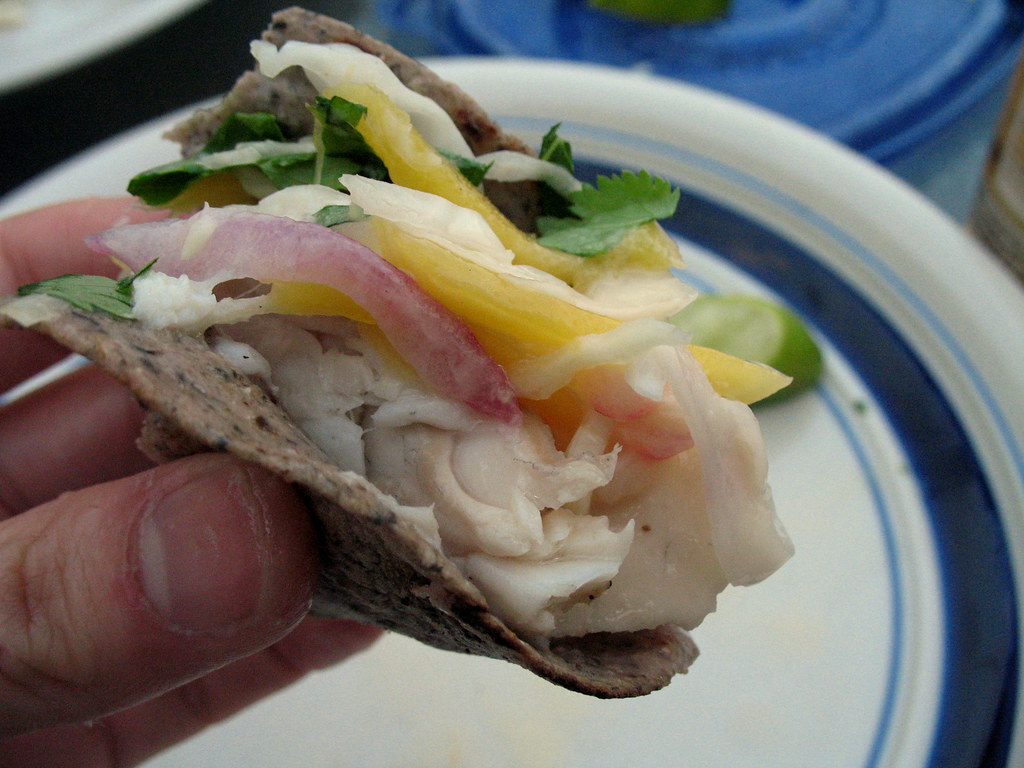 and… the envy shot

Sprinkle the fish with salt, pepper, the juice of one lime and the olive oil. Cover and chill while you prepare the rest of the ingredients.

In a large bowl, combine the cabbage, red onion, mango, juice of 1 lime, mayonnaise and a pinch of salt. Add a little of the cilantro, too, if desired. Fold together until evenly distributed. Cover and chill (can be done a day ahead).

Spread foil on top of a grill rack and fold securely over the edges (this will prevent it from shifting when you flip the fish). Heat up the grill until nice and hot. Place the fish fillets on the foil with some space in between them. Wrap the tortillas tightly in foil and place on the side of the grill. After about 2 minutes, or depending on how thick your fillets are, flip the fish over once. Grill for approximately 2 minutes longer, or check by breaking the pieces apart a bit to see if the flesh is completely cooked through. Remove from grill and place on a serving dish. Break into large-ish chunks. Serve immediately with the warmed tortillas, mango cabbage slaw, herbs, and a cut-up wedges of the extra lime as a make-your-own buffet.

Four brownie points; This is fantastic for a dish that makes one drool the way it does. Light mayonnaise (or even better, light Greek-style yogurt) is used only minimally for that luscious, creamy sauce you want to have in your tacos, letting the flavors, especially the sweetness from the mango substitute for using it excess. Tilapia is a very lean fish, full of omega-3 and omega-6 fatty acids to counter its cholesterol. And with blue corn tortillas instead of white, you’ll benefit from a whole grain with more protein and less starch.

Five maple leaves: Let’s defer to the trusty Guide to Ocean Friendly Seafood: Tilapia scores well. As well as you can score according to this seafood guide’s ratings, for its abundance and low-pollution farming techniques. That tells some of the story, though the other part of the story — how far away it was caught — I can’t be sure about. It tasted pretty fresh, though. The mango and limes, discussed above, mar a potentially great green factor rating, since the rest of the veggies were local (i.e. on my windowsill) and the tortillas were made from organic ingredients.