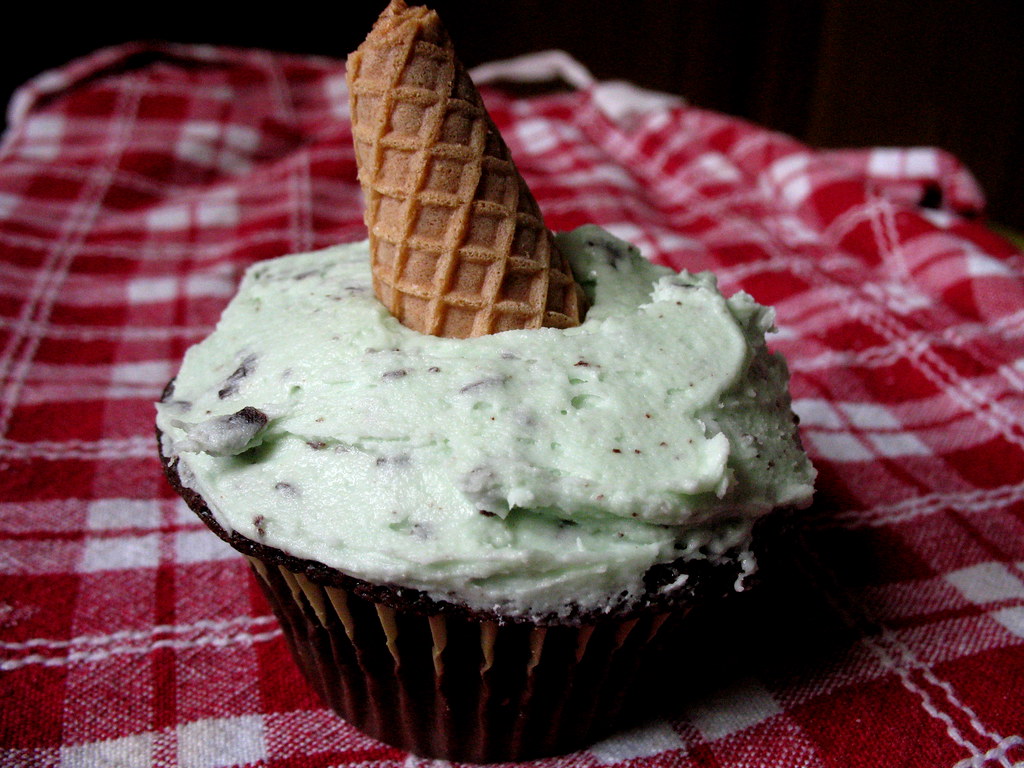 As a friend text messaged me earlier on the night of the 2nd Annual Cupcake Bake-off held by the Brooklyn Kitchen, some milk would be really good to bring along and serve with the cupcakes, instead of drinking pint after pint after beer after eating cupcake after cupcake (after cupcake). Well, a night later I’m finally taking up that advice with the leftover cupcake scraps stashed in Tupperware in my fridge, and damn. Is this ever the best combination. 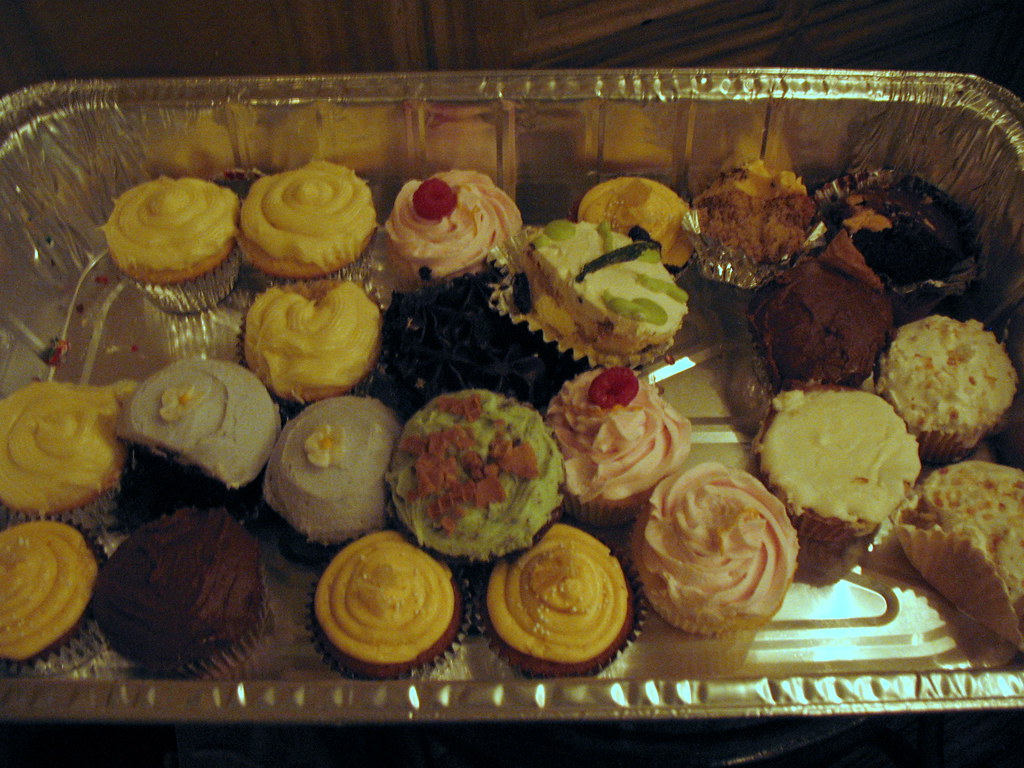 Not to mention that my leftover reject cupcakes baked up more like fudge brownies, with dense, sunken gooey centers and a trace of peppermint extract that actually improved in taste after chilling for 24 hours. Who needs frosting when you have cupcakes that glue your mouth together already? This is a job for milk and milk only. But I’m skipping ahead of the story. The real festivities began Monday night, when my favorite kitchen store revived their once-cozy cupcake cook-off with an all-out parade of more than thirty cupcake competitors at Union Pool, in Williamsburg. 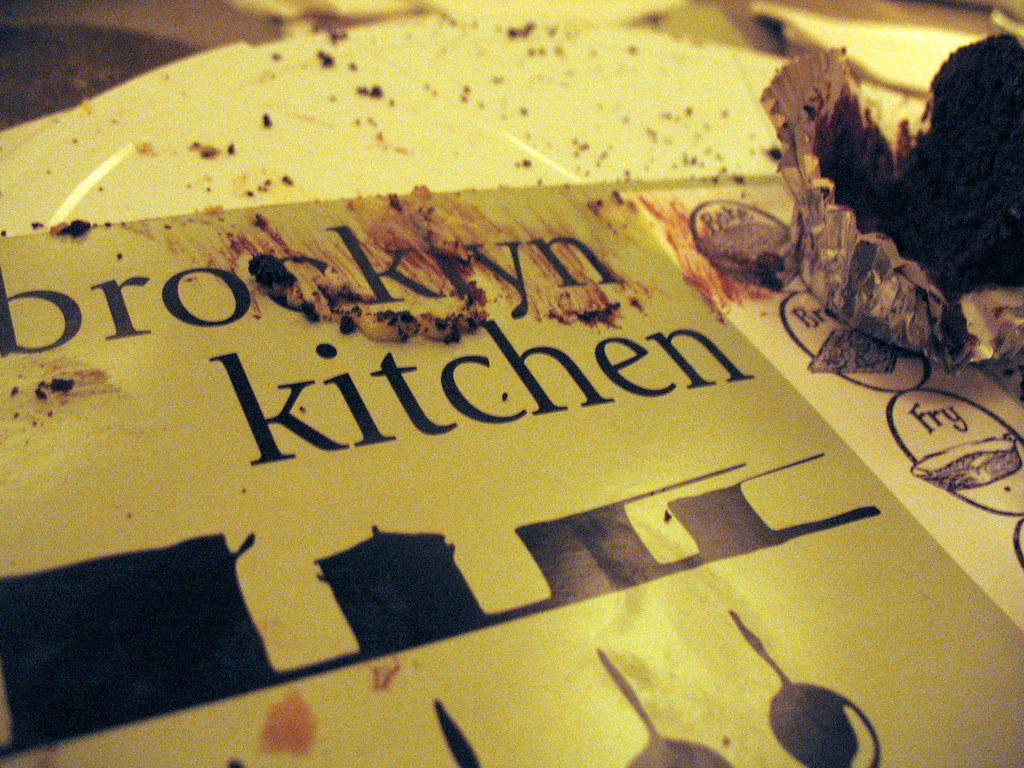 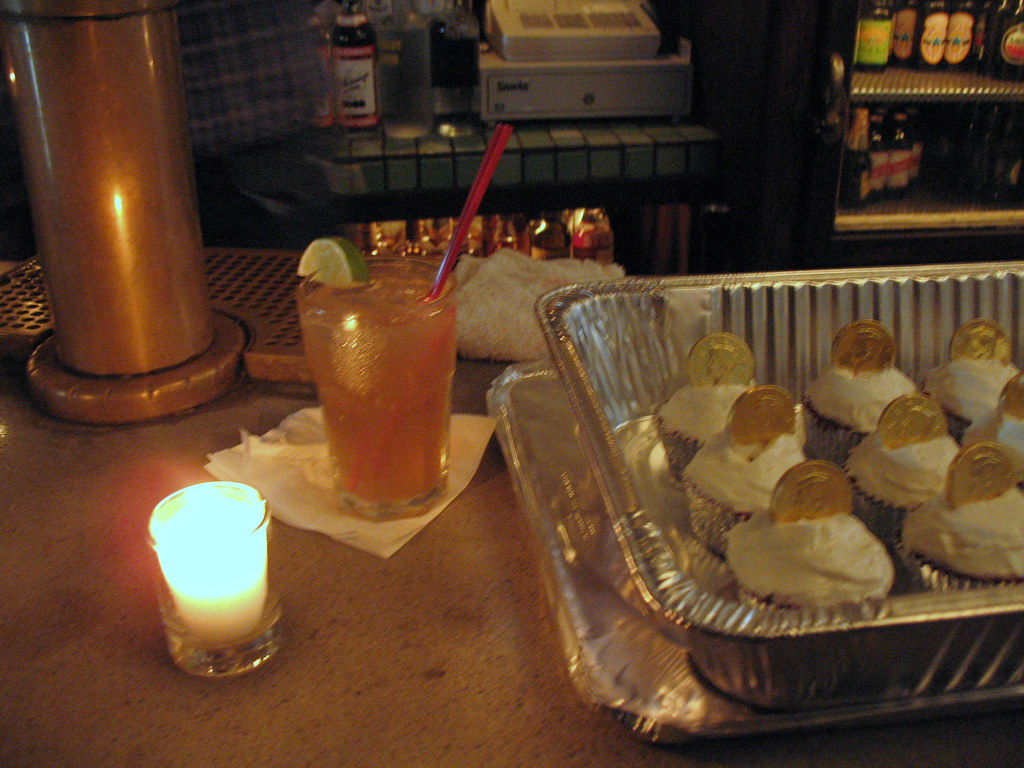 My humble entry for the evening, dark chocolate and peppermint-tinged cupcakes with mint chocolate chip buttercream frosting, won zip. But I did get a taste of the first-place cupcake for the night, and I’m not surprised it won. With a rich, chocolate and porter cake and salty caramel frosting, newcomer Kate claimed first place in the Exotic Flavor and All-Around titles. (I also got to ride the bus back to Crown Heights with the champ and steal a glimpse at the prize goody bag.) 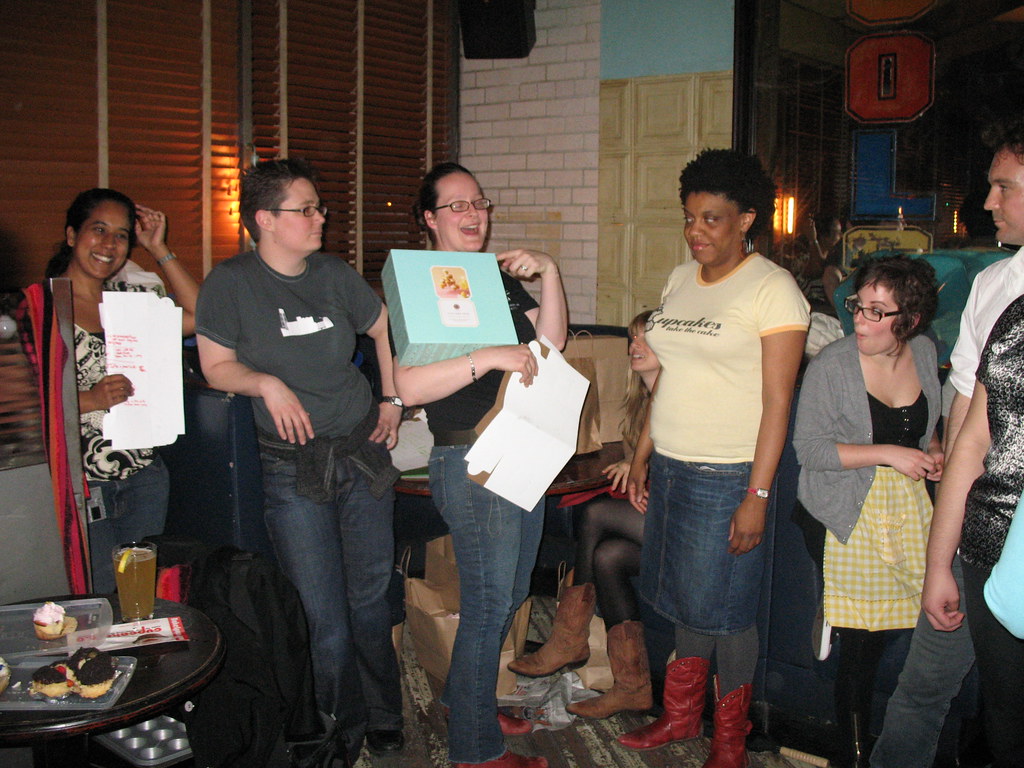 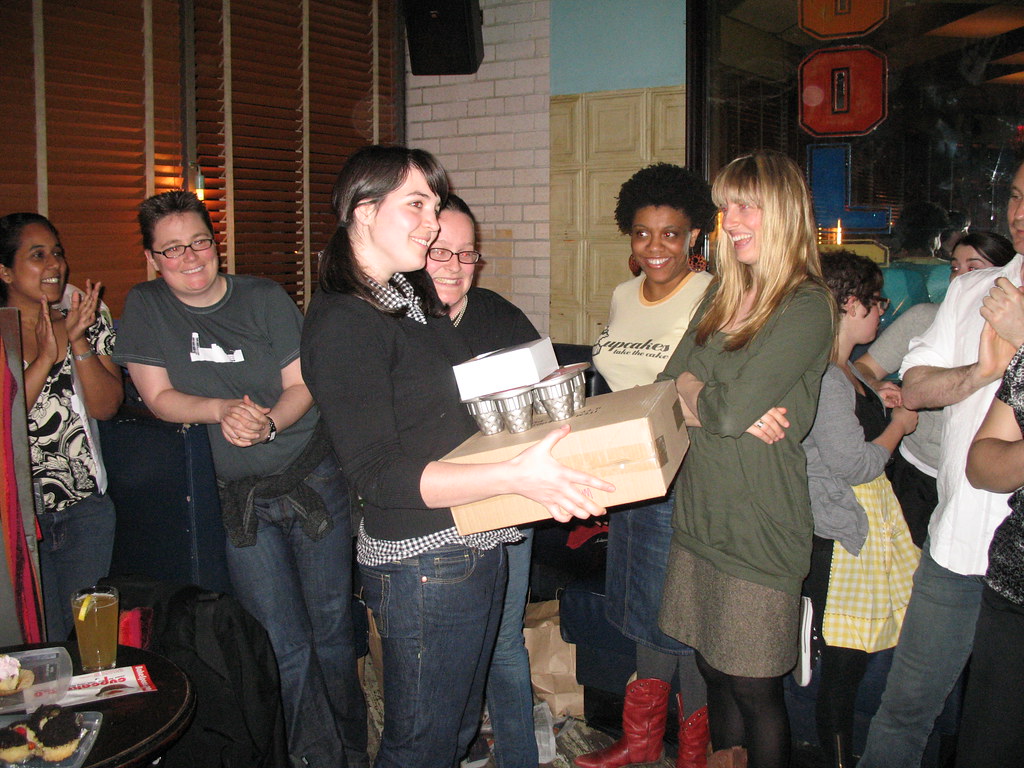 and winner takes all


The winner of the best appearance “plain” category went to cupcakes that used cones… in a much more thoughtful way than mine did. The cupcakes were somehow baked into the sugar cones and then were topped with frosting where they puffed from the tops. I’m not sure how it tasted, but the effort alone was enough to sell me. 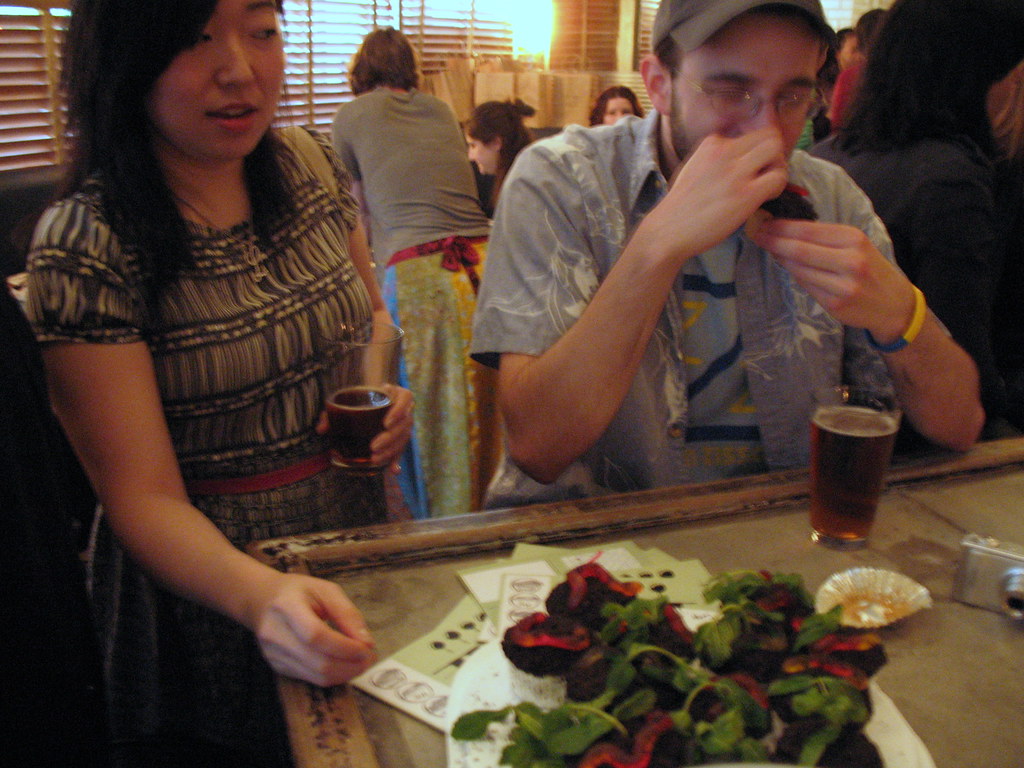 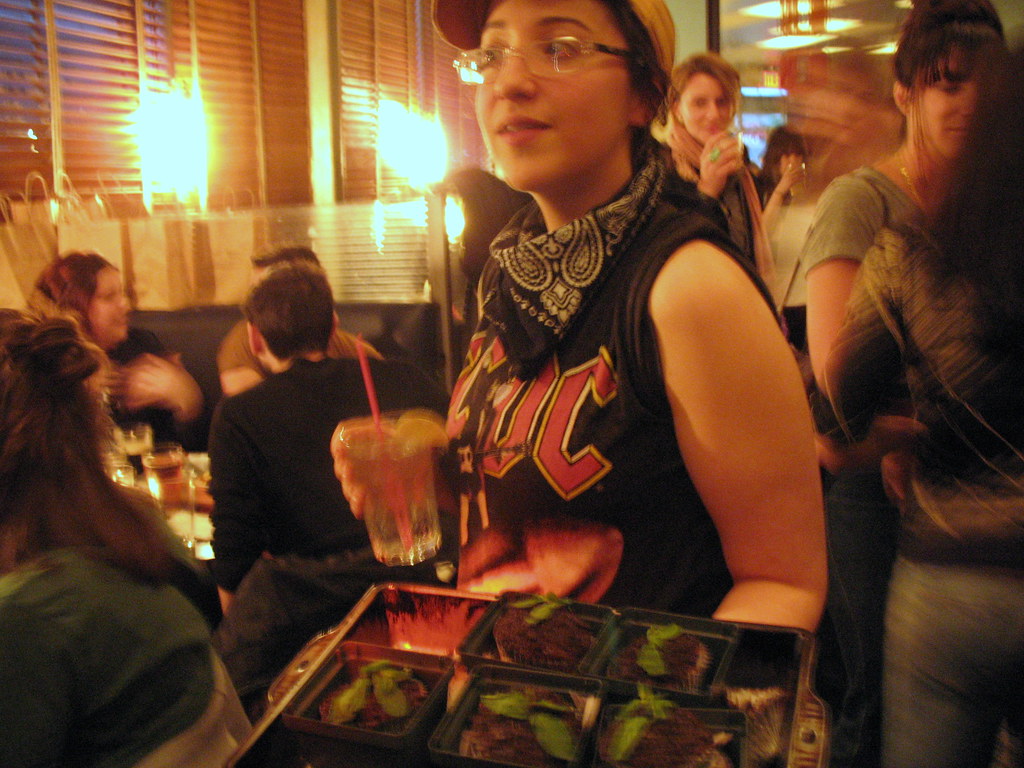 and ditto (minus worms) in planter pots 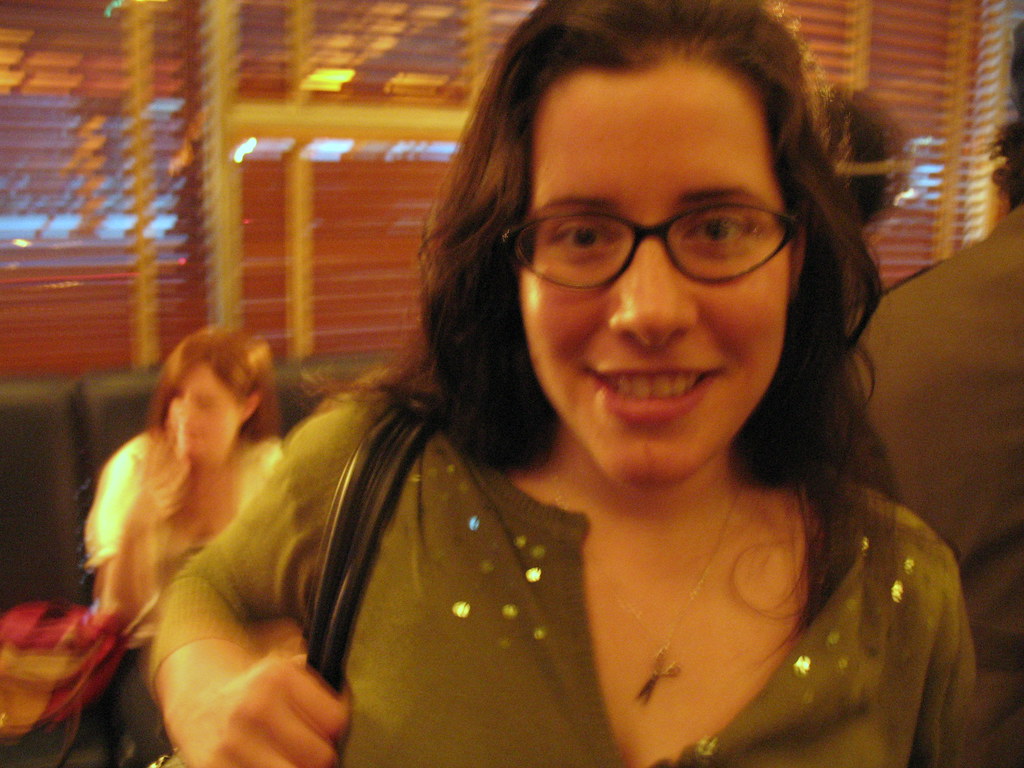 Rachel of Cupcakes Take the Cake does her field research


There were many more cupcakes whose outside appearances, as elaborate and beautiful as they were, still belied their taste. Karol’s chocolate cookie crumb (“dirt”)-crusted cupcake with gummi worms and mint sprigs planted on top of them were filled with a luscious Boston crème. Matt’s “loaded” cupcakes featured a vanilla olive oil-based cake with a splurt of raspberry blueberry compote nestled inside. (I still have no idea how my friends managed to stuff their cupcakes with filling.) And Mike’s Guinness cupcakes were as rich and satisfying as the heady stout itself. Here’s the winning team, in my book. 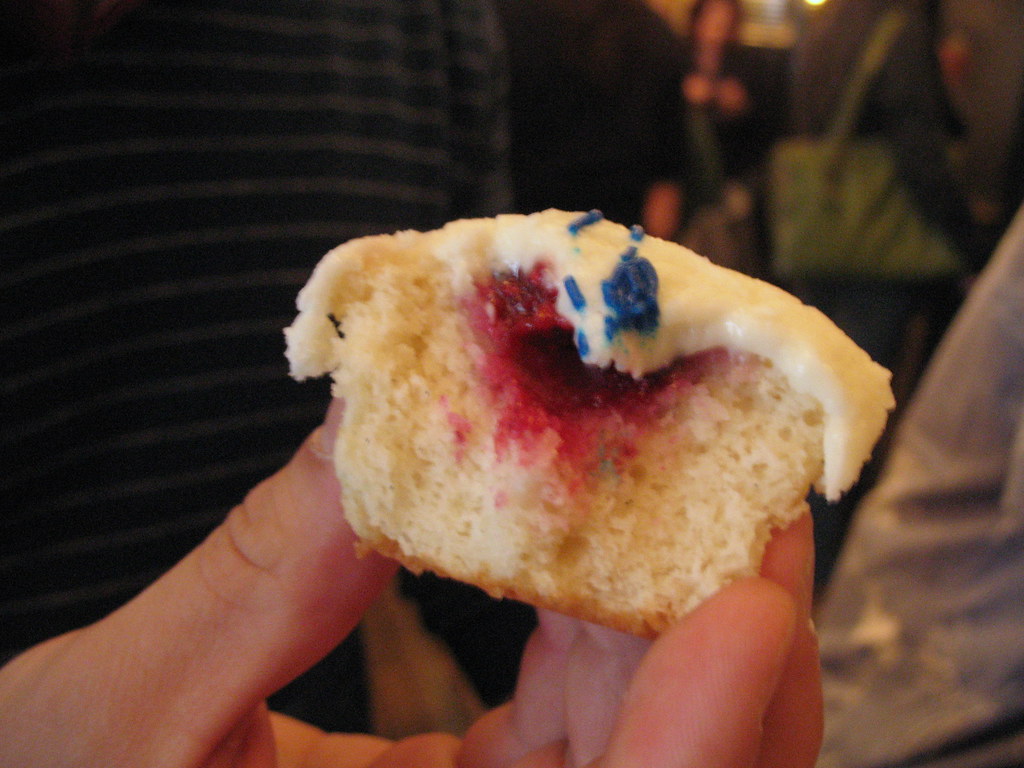 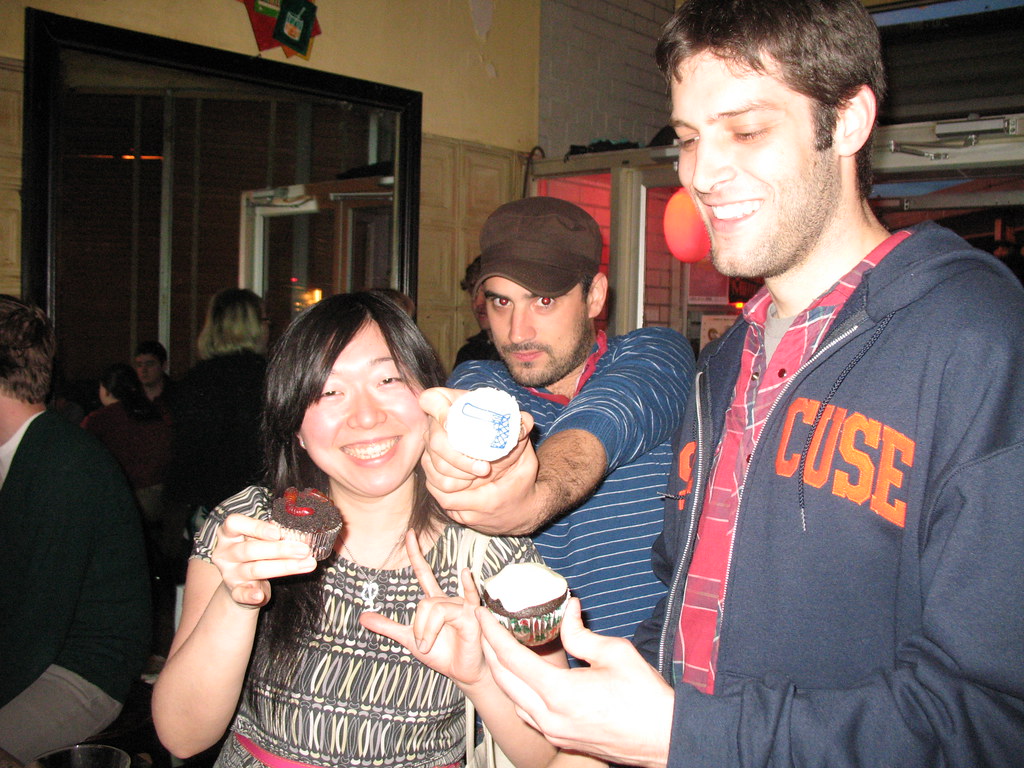 To make the cake, place the butter, cocoa and chocolate in a medium bowl and place bowl over an unopened pan of lightly boiling water. Remove and let cool for 5-10 minutes. Stir until melted and thoroughly combined. In a separate large bowl, whip the eggs with the sugar. Add the vanilla, peppermint and salt. In another bowl, combine the flour, baking soda and baking powder. Add the melted and cooled chocolate mixture slowly to the egg mixture and mix until thoroughly blended. Sift in the flour gradually, while mixing, until thoroughly combined.

Preheat oven to 350 degrees. Line muffin trays with baking cups and fill each cup about 2/3 full (otherwise they will spill over the edges and you will end up with a lot of chef’s scraps — too many, in fact). Bake for 18-20 minutes until a toothpick inserted into the center comes out clean. Let cool.

Meanwhile, make the frosting: Beat the softened butter thoroughly with a wire whisk. Gradually add in the confectioner’s sugar a half-cup at a time, whisking to combine thoroughly with each addition. Add the milk after the first two cups of sugar have been added. Add the peppermint, vanilla and food coloring, and once the frosting is fully blended, fold in the chocolate chips. Carefully spread the frosting on top of each cupcake. Decorate with crushed sugar cones. 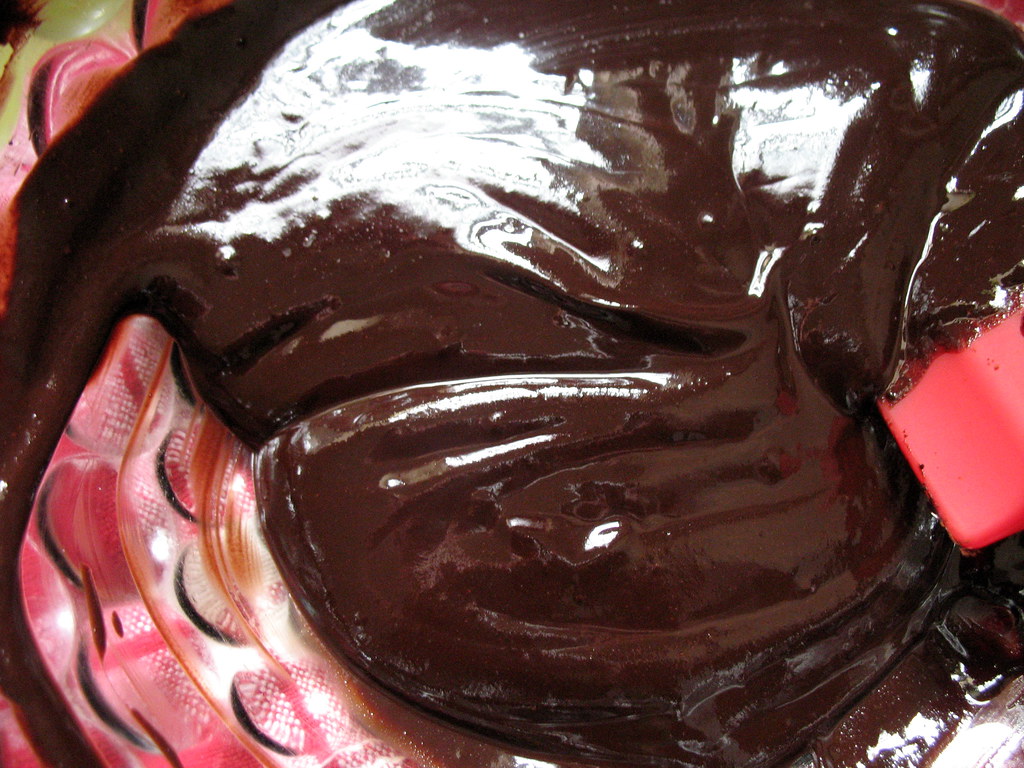 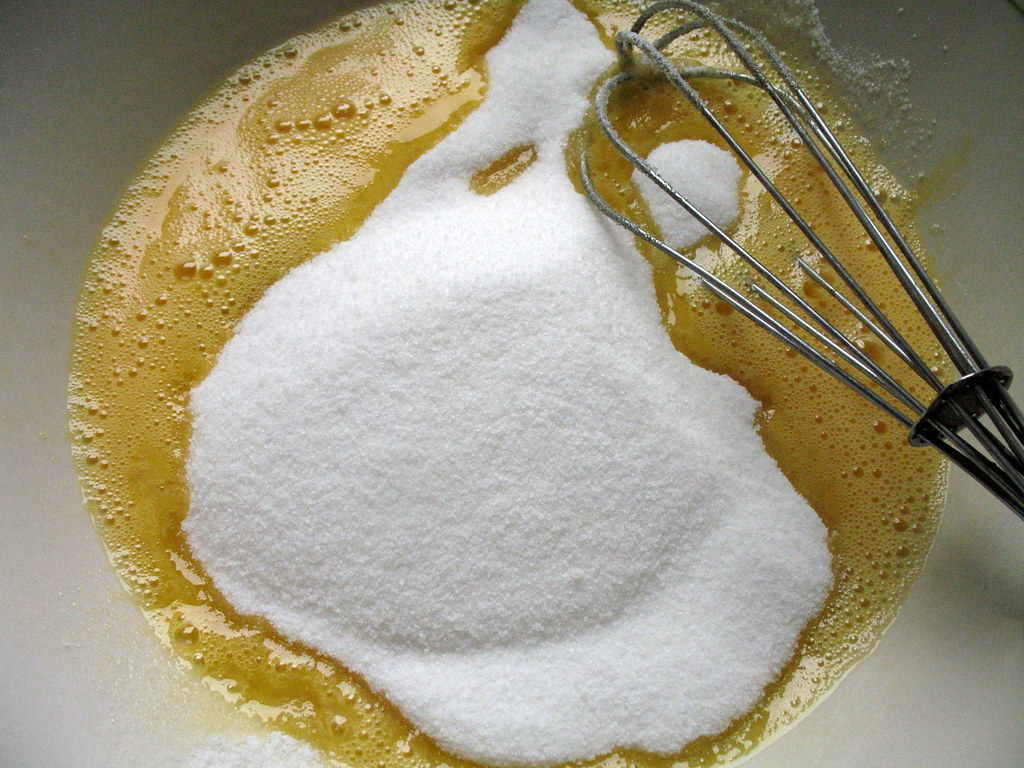 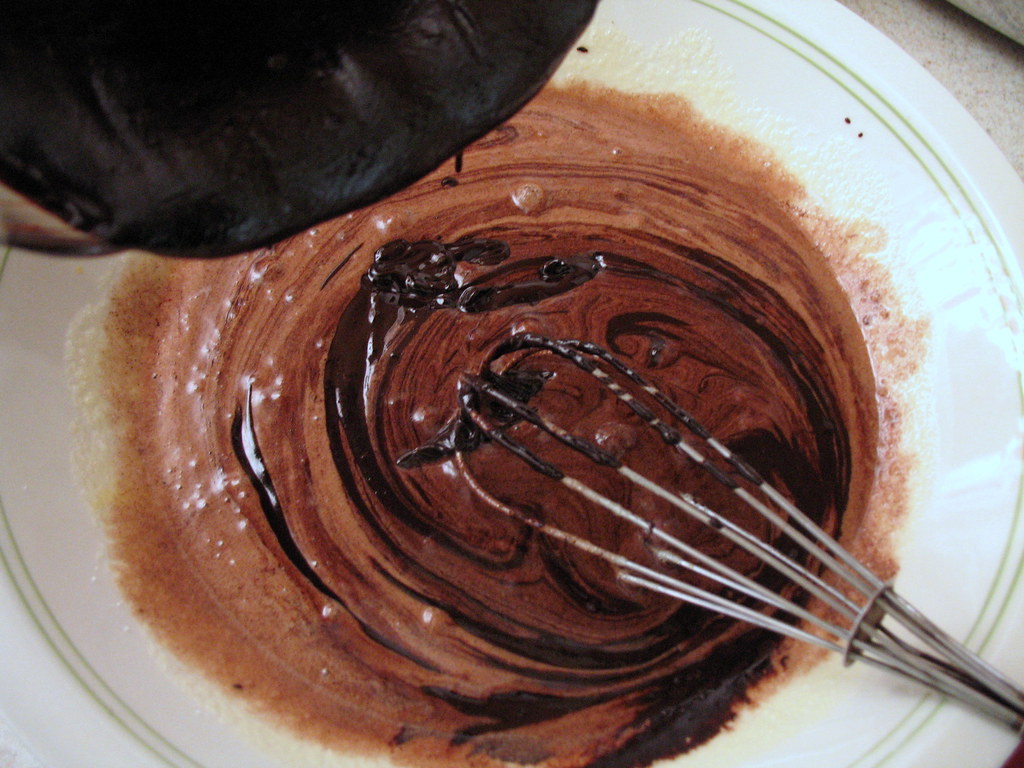 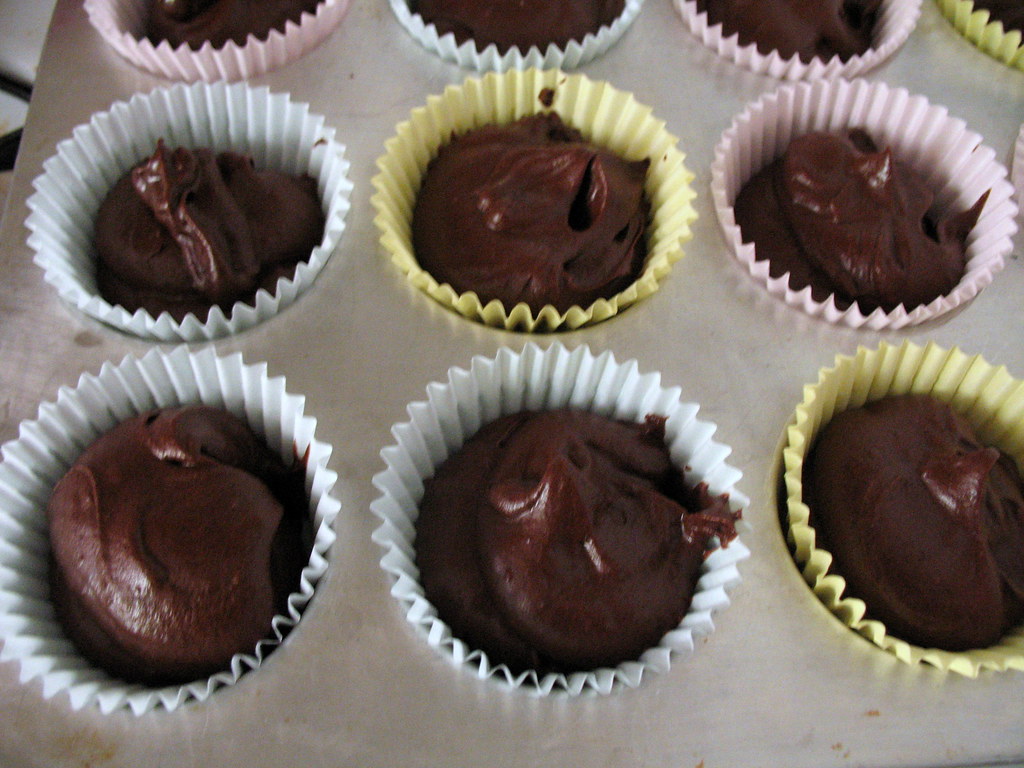 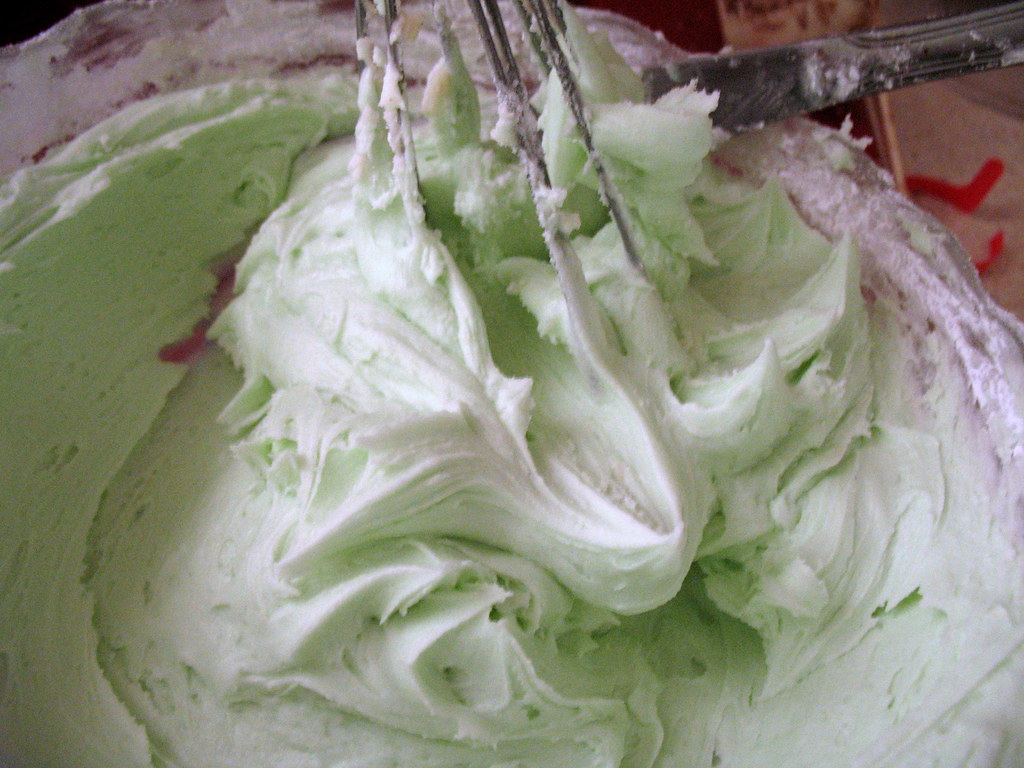 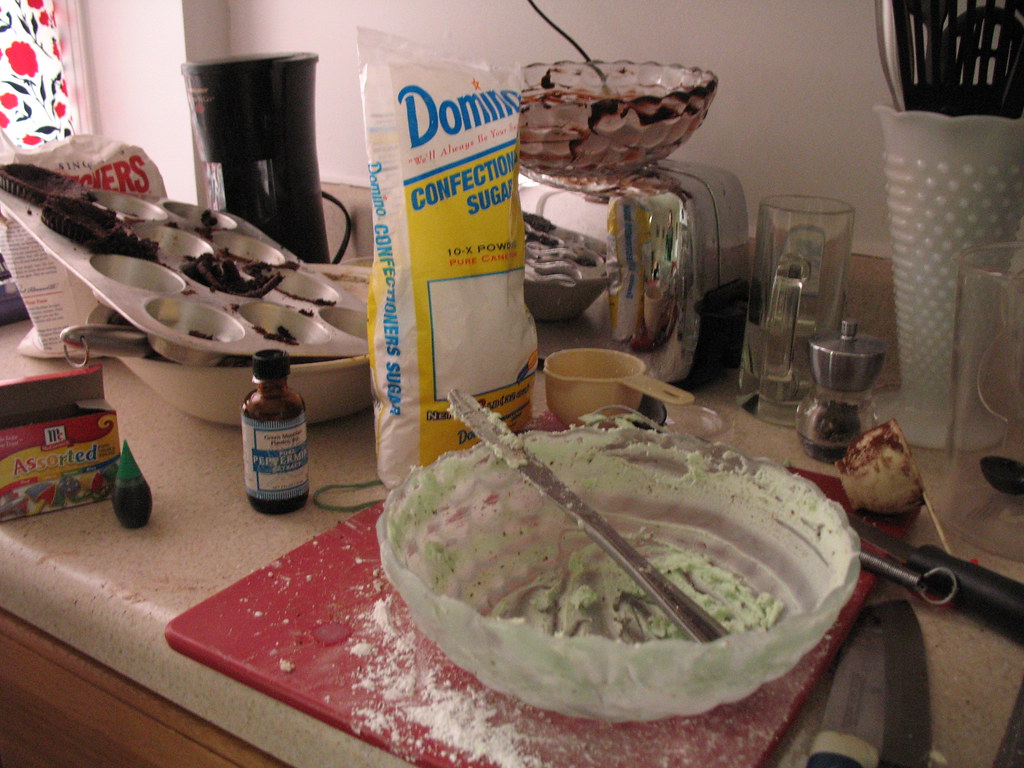 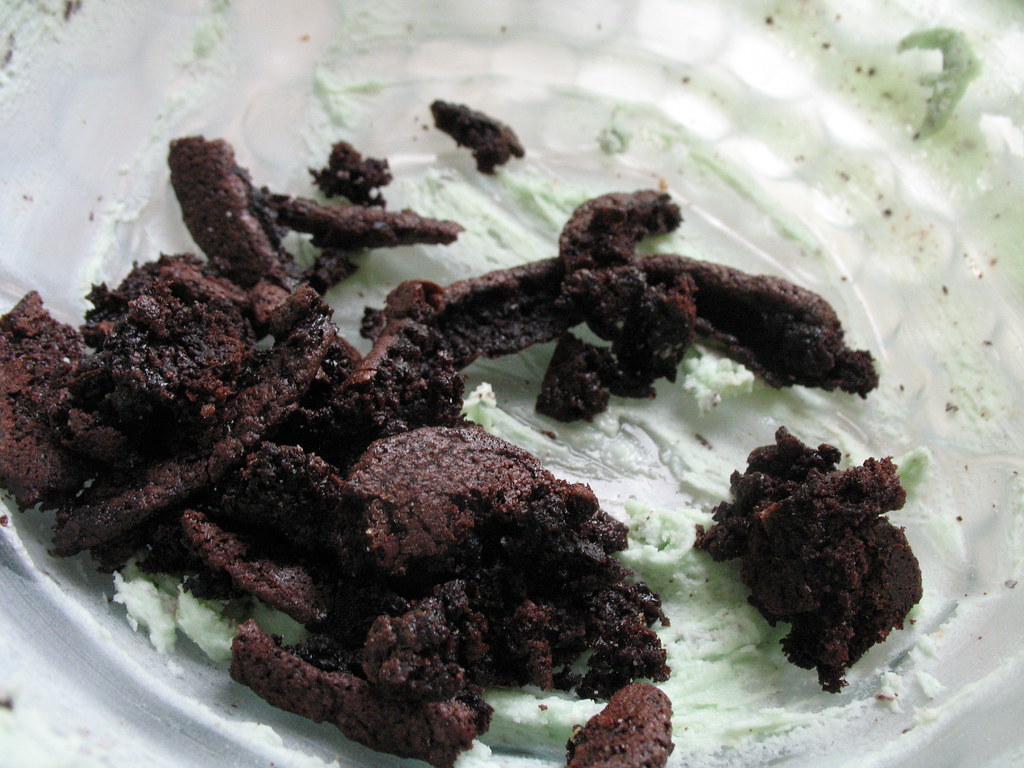 One maple leaf: Does it count if I used green food coloring? I didn’t think so. Nothing to see here, sorry…