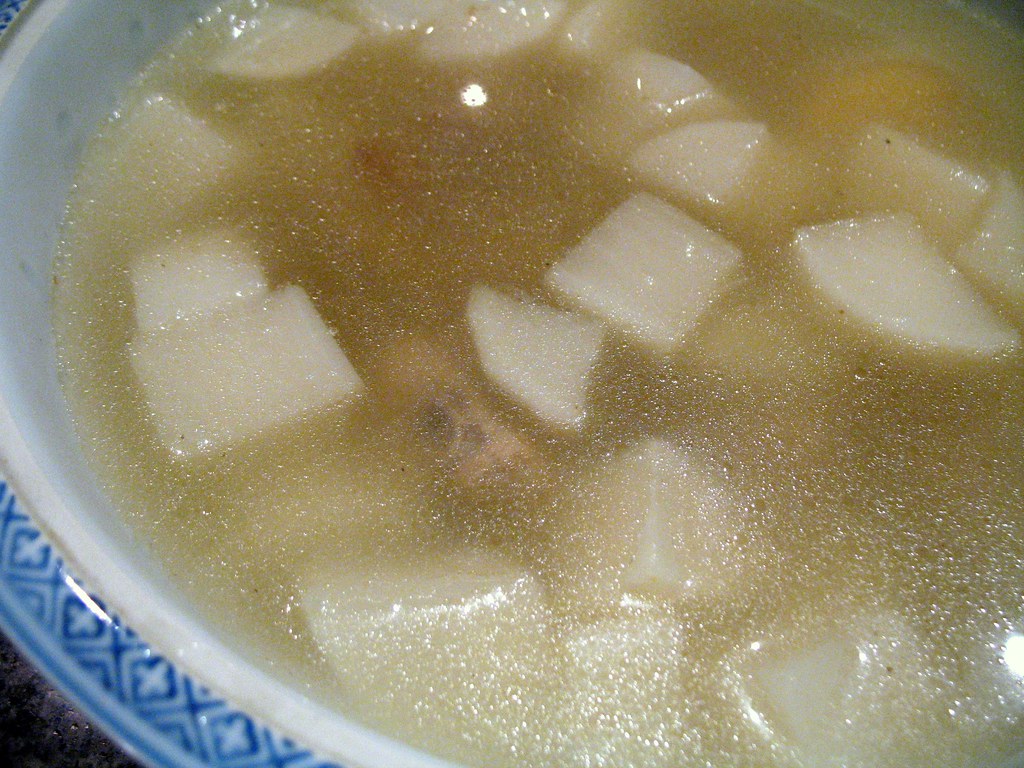 This was the challenge I faced growing up with learning to cook anything too rustic and simple: Time and again, I’d be taken aback by something that my mom had just thrown together. Wow, this is really good, I would say, tasting an eggdrop soup with crunchy scallion bits floating about. Or a stir-fry of julienned potatoes with a dash of white pepper, the starch suspending the sticks in a light, opaque sauce. Or, most recently, this clear soup with soft cubes of turnip and a background smokiness of sparerib bones.

“This is just peasant food,” my mom would insist, more annoyed than bewildered.

Over the years, I’ve been conditioned to drop the question, “How do you make it?” from my vocabulary when it comes to these types of dishes. It would invariably be greeted with scowls and claims that there was “no way,” or that it was not really a dish, or else indirect answers such as, “You just make it when there’s nothing else to eat.” Instead, I’ve learned that all one can do is stand back and watch. 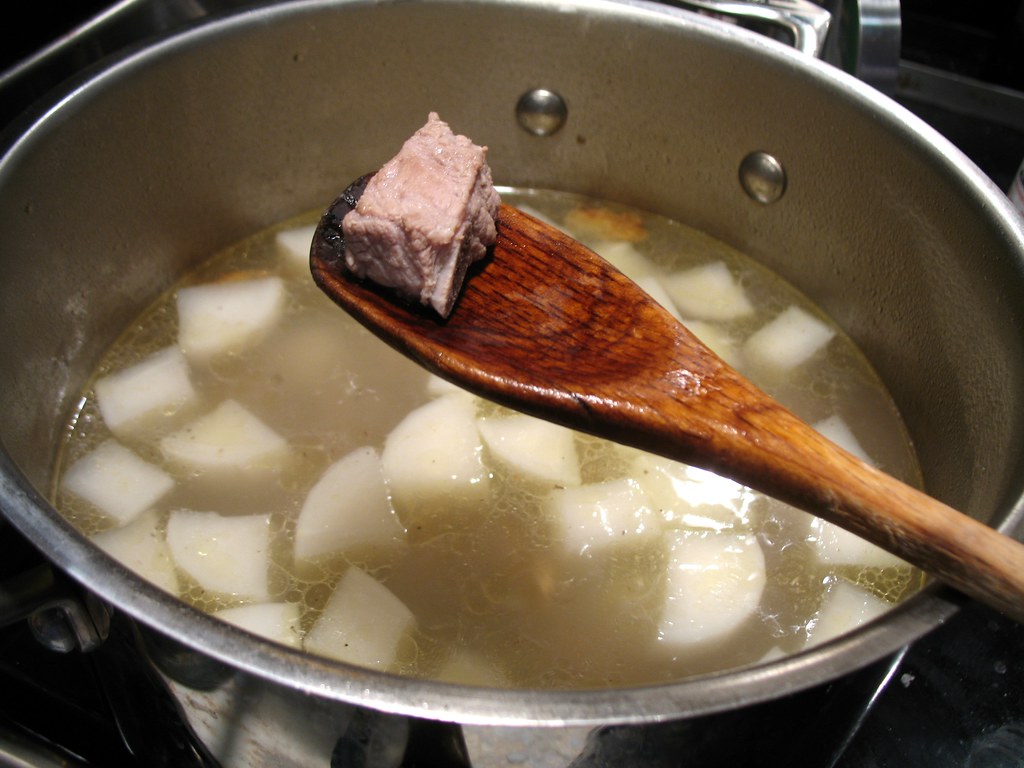 So that’s how I’ve come to discover that water, turnips, some bones and a bit of broth make the perfect winter soup. Soothing and delicate, it’s great for sloshing together with leftover rice. My mom confessed that when she last cooked this for us around Christmas, she had wanted to make wintermelon soup in the same vein (wintermelon being much more subtle to the palate as well as in texture, and thus considered a little more luxurious). However, the wintermelon at the grocery that day didn’t look as fresh as the turnips. So, you could say that this soup is something that you just make when there’s nothing else (and wintermelon) to eat.

I don’t know if there’s an inherent embarrassment to cooking something so pedestrian. Perhaps I shouldn’t shame my elders by sharing this recipe right now. But I still think that when something tastes good, it tastes good. When it’s this cheap, simple and healthy as well, all the better to it. 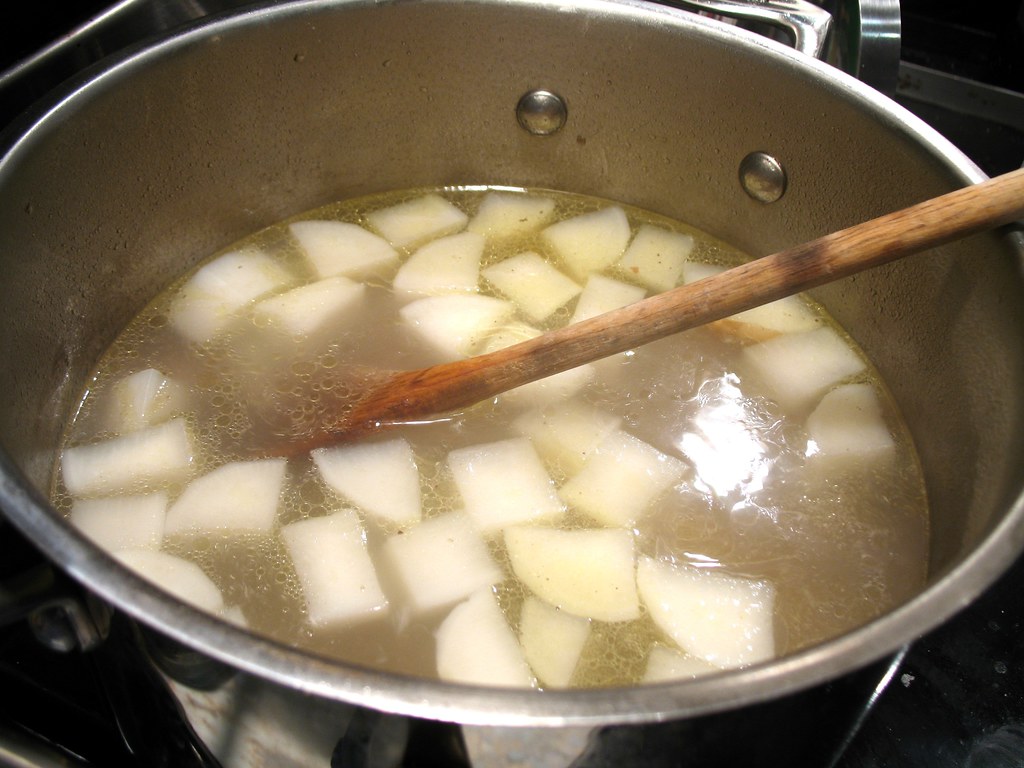 
Any turnip will turn out a good broth for this recipe, whether it’s one of the long, Asian varieties or a round, purple-skinned one. The trick with this recipe is to cook the turnip cubes until soft and transparent, but not mushy; you don’t want to see grains floating around in the clear broth. Tasting a cube for done-ness is imperative here, and it should melt in your mouth like a soaked crouton.

Heat oil in a large stockpot or Dutch oven. Add the ginger and cook, stirring frequently, over medium-high heat until fragrant, about 1 minute. Add the spareribs and continue cooking and stirring until slightly browned, 2-3 minutes. Add the water and stock and bring to a boil. Reduce heat to medium-low and cover. Let cook for 30 minutes. Remove cover and skim the top of the broth of any particles with a slotted spoon.

Add the turnip cubes and continue cooking on medium-low for about 25 minutes. Taste turnips for tenderness; when fully cooked they should be soft and mellow-flavored, but not falling apart in the soup. Cook longer if necessary. Remove ginger strips before serving as well as spareribs, if desired. Add white pepper and serve.

Three brownie points: Contrary to my stubborn belief that white vegetables have less nutrients, white turnips are a valuable source of many vitamins, including fiber, calcium, potassium, copper, Vitamin B6 and even Vitamin C. Peasants have much to snigger over for dining on these root vegetables, which are also low in calories. Trimming the spareribs before cooking is essential to keeping the fat content of this recipe relatively low, although I think it’s nice to have a few shiny oil slicks at the surface of the soup.